Sex, Lies and the Dirty 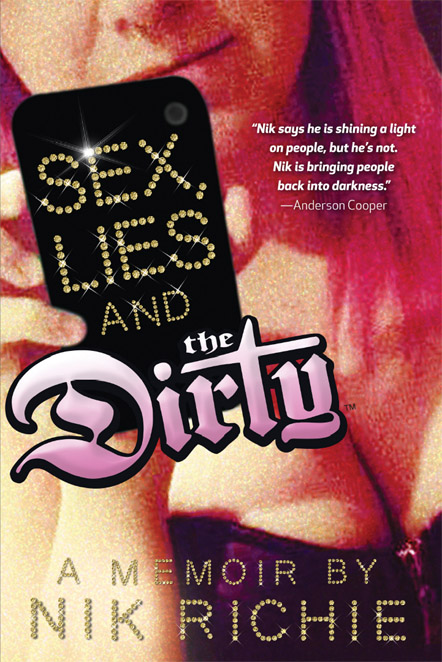 Without me, none of this would have been possible.

A Call From Justin Levine

Audrina Patridge ends up fucking us.

Our original plan is to do a 4th of July weekend out in Vegas for branding purposes, but because I haven’t gone public yet as Nik Richie, we need to put a face on the event. Someone that we can put on flyers and people will recognize. Tony Wang
1
, who is our contact, tells us we should reach out to a celebrity to host this thing, recommending that we get a cast member from
The Hills
2
because everyone is watching that fucking show. There’s also the issue of the $25,000 the Hard Rock wants to charge us for being there or using their venue or whatever. If we pull in a celeb to host, Tony explains, the Hard Rock will waive that.

The decision doesn’t take long. We don’t want a dude to host and Lauren Conrad costs fifty grand, so Audrina is our best option. We agree to fly her and her four friends out (first class), pay for their rooms at the hotel (suites), and Audrina’s $15,000 appearance fee.

I’m glad we manage to book a celeb for the event and save a few grand, but I have to admit that I don’t know much about Audrina outside of the following two things:

1) She’s on a popular TV show, and although she has a terrible refund gap
3
I could probably fuck her and feel okay about it.

2) From guys I know that have fucked her, she gets really wet—like obnoxiously wet. So wet that you can’t feel anything and you need five paper towels just to wipe your dick off. I realize this shouldn’t be a point of issue, but it’s disgusting from what I’ve been told. Like she’s got a drooling Labrador inside her cervix.

Despite the rumors, I’m still leaning toward fucking her should the
opportunity arise. If it doesn’t, I’m cool with just meeting her and getting a contact out of the deal. It’s whatever. I’m optimistic about things. We buy a bunch of extra merchandise to give away to coincide with the Audrina appearance: T-shirts, trucker hats, and panties that have
The Dirty
logo on the ass. Everything is in line for a successful weekend.

Five days before the event is when we get the call.

It’s Audrina’s management telling us, “Audrina’s not doing it. She doesn’t want to go to Vegas.”

It comes off a little shady because, again, Audrina is getting paid to show up at Body English, drink for free, and take a few photos. Not very difficult in the grand scheme of things. That’s the excuse they give us though: “She’s not doing it. She doesn’t want to go.”

And I’m thinking,
Seriously, who doesn’t want to get paid to go to Vegas?

So I’m fucking livid because Audrina is canceling five days before the event (and not even with a decent excuse), and because she’s doing it so short-notice that makes it next to impossible to book another celeb to fill the slot. We’re also back on the hook to pay $25,000 to the Hard Rock. Fortunately, we have a backup plan.

Who needs Audrina when you’ve got
Dirty
Celebs?

Leper and Alien are from Dallas.

We’re flying all three of them out to Vegas for the event, but it’s tough to even get these girls on an airplane because they’re all alcoholics and drug addicts. Anything they can put in their body to lose their sense of reality, they’re on it, and you can tell G-Girl is taking all sorts of crazy prescription shit on top of whatever bottle she can get those engorged lips around. Leper and Alien would suck a hobo’s cock if they thought Crown Royal was going to shoot out, but that’s not really saying much since it’s a well-known fact they dabble in porn and pay-for-play
4
. Pictures don’t lie.

They’re blonde and tan and slutty and rarely sober, and though I’m inclined to disagree, the general consensus is that they’re all “totally
fuckable.” So these girls, these
Dirty
Celebs
5
, as we refer to them, are meant to replace Audrina Patridge to an extent. The idea is that we’re going to hire ten photographers to follow them around like paparazzi, and that this will draw attention to them in a way that will have people associating
Dirty
Celebs with chicks like Paris Hilton who are always out partying. Add a bunch of alcohol and whatever drugs they wind up taking, and it should yield some interesting footage. Something tangible.

These girls can be the thing that Nik Richie can’t: a public image, a face to the idea. No matter how often they say “don’t look at me” or “stop talking about me,” it’s bullshit. They’re some of the biggest fame-chasers
6
out there, and the fact that they’re coming out to Vegas confirms that in my mind.

Meanwhile, on the Audrina Patridge front, the Hard Rock gets back with us and verifies that her
I don’t want to go to Vegas
excuse was a crock of shit. Apparently, she (or her management) thought we wanted her to wear the
Dirty
panties at the Rehab pool party, and then there was another line of bullshit about how she got booked somewhere else for a higher rate.

I make a mental note to blast her on the site later.

No time to think about that now. The girls are in Vegas and already Alien is trying to fuck me.

Someone from my idiot staff tells Alien that I’m the guy.

Not directly, but they give her my room number which is basically the same thing. Even a drunk like her can find a room number. How she actually gets in is still a mystery to me. All I know is that around three in the afternoon, Alien is in my bedroom taking her clothes off, saying, “Eat my pussy. Eat my pussy,” in her weird Dallas accent, slurring hard on airplane booze and whatever else she’s on.

Her skin smells like urine and spray tan, and she’s pushing me onto the bed. Pushing hard. Aggressive. And I’m saying “No.” Confused. Caught off-guard because for the better part of a year I’ve called this chick out for
being a drunk-slut-cokehead piece of shit, putting her on blast
7
, boosting my own popularity at her expense. Now she’s throwing herself at me. Wanting me. Holding me down on the hotel bed.

This is how Alien and I meet: her saying, “Eat my pussy, Nik.” Small tits hanging out. She presses them to my face, my mouth. Those smell like urine, too, and my lips curl over my teeth. Curl tight. Her fingers wrap around my wrist, spelling G-L-A-M in blue and red ink. One letter per finger. They clamp down and lock. My face turns left…right…back again, avoiding her lips. Her breath smells like liquor and shit, and she’s saying it again. Alien says, “Eat my cunt,” like every disparaging thing I ever wrote about her was my weird way of flirting.

I say, “No, I’m not the guy. I’m not the guy,” trying to push back, and when she reaches down to grab my cock, I’m able to shift my weight and throw her off. Alien is so fucked-up though that she thinks I’m playing into her aggressive bullshit, smiling messy pink gloss. Drunk. She can’t even comprehend rejection. Can’t process a guy not wanting to fuck her, maybe because whatever is kicking around in her system won’t let her. I’m not sure.

“Seriously, I’m not him,” and then I pull Alien off of the bed, walking her out of the suite and locking the door behind her.

That’s only the beginning; I can feel it.

It’s about to get so much worse.

At Body English inside the Hard Rock, G-Girl, Leper, and Alien
are getting photo-bombed at the press wall, doing what they do best: smiling, posing, hair-flipping, and that thing where they bring their faces in like they’re about to kiss, but then they freeze less than an inch from touching. Teasing. The cameras love them. Alien does one of her signature poses, flipping the bird and kissing the print of her middle finger while G-Girl and Leper bounce their tits for the photographers. Huge, fake tits that someone else paid for, and now the crowd is stopping to see what all the fuss is about. Tan, blonde girls flaunting themselves and each other. Advertising. Modeling. Fame-chasing.

Framing Felipe by Holley Trent
Sacred Influence by Gary Thomas
Shadow Demons by Sarra Cannon
Superstition by David Ambrose
Monsoon Summer by Mitali Perkins
Ship of Death by Benjamin Hulme-Cross, Nelson Evergreen
All I Want Series Boxset, Books 1-3: All I Want for Christmas, All I Want for Valentine's, All I Want for Spring by Clare Lydon
The Dying & The Dead 1: Post Apocalyptic Survival by Lewis, Jack
Who Brings Forth the Wind (Kensington Chronicles) by Lori Wick
A Mummy for Christmas by Clare Revell
Our partner