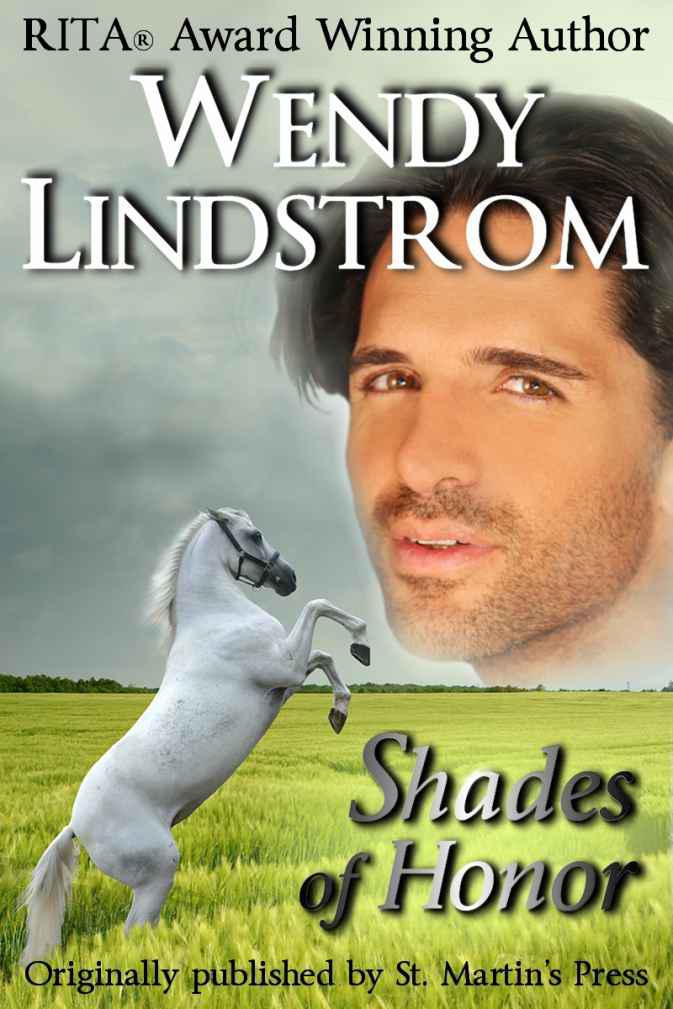 “The awesome underlying emotional power of Ms. Lindstrom's story grabs hold as she deftly explores the love between father and child, friends, and the deep, sometimes ambiguous bonds between brothers...guaranteed to move you to tears and even laughter.
Shades of Honor
is a portent of great things to come from a very powerful new voice in the genre."
—Romantic Times

"A perfect ten...will amaze readers by the depth of emotion...
Shades of Honor
is one story that should not be missed!"
—Romance Reviews Today

Copyright © 2002 Wendy Lindstrom. All rights reserved. With the exception of quotes used in reviews, this book may not be reproduced or used in whole or in part by any means whatsoever without written permission from the author.

Note: This novel is entirely a work of fiction. Though it contains incidental references to actual people and places, these references are merely to lend the fiction a realistic setting. All other names, places, and incidents are the products of the author's imagination. Any resemblance to actual persons, living or dead, events or locales is entirely coincidental.

He always knew he’d come back. Everything he’d ever wanted was here.

Radford Grayson inhaled pine-scented air deep into his lungs and listened to the whine of a saw blade chewing through dense wood. It echoed along
Canadaway
Creek, which cut a deep, winding path behind the sawmill and emptied into Lake Erie a few miles north of Fredonia. The sound made Radford’s legs tingle from the memory of standing on the vibrating sawmill table as a boy, feeding the huge whirring blade for his father.

He missed the rhythmic sound of saws and the gasp and belch of the old boiler. He missed the spongy feel of sawdust-littered earth beneath his feet and the constant squabbling of his three younger brothers.

He
needed
to stay this time. Even if it meant living a lie.

Rebecca was depending on him. Radford had let her down so often, his four-year-old daughter feared everything. Even now, he could feel her tremble as she clutched her blanket and cowered against his thigh.

“Let’s move over there,” Radford said, then led her to the far end of the building where it was quieter. Kneeling, he cupped her face in his palms, vowing to himself that it would be the last time he uprooted her, that they would make a real home in this small village of Fredonia that held so many of his cherished memories. “I’ll tell Uncle Kyle to stop the noise, then come get you,” he said, hoping it was Kyle running the saw.

Rebecca caught his hand. “You said you wouldn’t leave me.”

“I’m just going inside this building. I’ll only be gone a few seconds.”

As though she had expected his answer, Rebecca’s hand slipped from his. Eyes full of resignation, she sat on the mill steps, slowly drawing her knees up until her toes pointed and her heels rested against the back of the stair tread. She bunched her blanket on her knees and laid her head on it, staring silently at the swaying maple trees beside the barn.

Her dejection pierced Radford, but he knew the noise inside the building would panic her more than his momentary absence. “I’ll hurry, sprite.” He stroked her brown curls, then started up the stairs.

Those three little words, spoken so softly to his back, stopped Radford mid-stride.

He
had
promised not to leave her again.

Rebecca’s fear of being without him was real. Radford’s last job with the railroad had taken him away too many times when she’d begged him not to leave her. In infancy, she’d been abandoned by her own mother. Olivia Jordon had refused to sacrifice her life as a ballerina for marriage and motherhood. Later, Rebecca’s nanny, the only woman Rebecca had grown to love, began her own family and moved away. The last nanny had abused Rebecca so badly that his daughter hadn’t spoken for a month after Radford dismissed the wretched woman. No wonder Rebecca was afraid to be left alone.

Though it would have only taken a moment to hail his brother, Radford turned back, unwilling to subject Rebecca to any more unnecessary doubt. He knelt down and offered his hand, melting at the sudden joy reflected in her eyes. “We’ll see if we can get Uncle Kyle’s attention another way.”

Radford carried Rebecca around a stack of hewn trees, marveling at the size of his father’s once-small operation. Thrilled with the chance to work the sawmill again, Radford surveyed the new two-hundred-foot plank structure that had replaced his father’s old building. It boasted a slab-wood sign that read Grayson's Lumber and Timber Works hanging proudly over a door made from several unmatched slats. Radford chuckled at the irony of a lumber mill displaying its scrap in such an obvious manner.

He knew immediately it had to be Kyle's idea. Though only a year younger than Radford, Kyle had established himself as a businessman by the age of ten. Radford smiled, remembering how Kyle had started selling the sawdust from the mill as insulation around the foundation of homes and businesses, and how he’d wanted Radford to become his partner. But Radford had been busy learning to run the family sawmill for their father, who had grown too crippled to endure the long days. Radford expected to spend his life building their family sawmill, but the war came and he enlisted in the Union Army. After his first bloody battle, Radford was so ashamed of his actions, he’d lost the ability to come home and look his father in the eyes, or endure his brother’s misplaced admiration.

The thought of Kyle, and his two younger brothers, Duke and Boyd, filled Radford with an urgent need to see them. Tightening his arms around Rebecca, he turned a slow circle, drinking in the glorious feel and scent of home.

He lowered her to the ground, then scooped up a handful of earth and wood fragments. “Smell that, sprite? That’s white pine and rich farming soil.
Home
, sweetheart.” He opened Rebecca’s hand and placed the sawdust-speckled soil in her palm, then smiled when she sniffed it.

“It smells like...” Her brow furrowed and she sniffed again. “Like...Christmas.”

Rebecca’s gaze shifted and she pointed behind him. “Who’s that?”

Radford looked over his shoulder, then stood. The yard was deserted except for a skinny boy in a wrinkled shirt and baggy brown britches who was dragging a thick iron chain from the barn. He watched with admiration as the determined lad struggled to pull the heavy iron rope toward his feed wagon. After a moment the boy paused, drew his shirtsleeve across his forehead, and glanced at the mill with an audible sigh.

That’s when Radford’s curiosity turned to true amazement. It wasn't a lad at all. It was a girl.

Gads! It was
Evie
Tucker!

The sight of Kyle’s fiancée in boots and britches caught Radford off guard. He thought Evelyn would have outgrown her boyish ways at age twenty-one. The last time he’d seen her was four years earlier at his father’s funeral. Though she had worn a dress on that occasion, Radford had been too blinded by grief to notice more than Evelyn’s blossoming figure. Now she seemed taller and thinner, though far from feminine in her men’s clothing, especially with her long, black hair twisted in an unflattering braid. Why, he wondered, did females insist on hiding what men found most sensual in a woman?

Well, Evelyn’s figure, or lack of one, was Kyle’s concern. Not Radford’s. He took Rebecca’s hand. “Let’s go meet your future Aunt Evelyn,” he said, crossing the yard slowly to accommodate Rebecca’s short legs. Despite Evelyn’s disheveled appearance, Radford smiled to himself as they approached his old neighbor. To a man who had lived with constant change most of his twenty-five years, there was something welcoming in the familiar sight of Evelyn in boy’s clothing. It reminded him of his youth when he and his brothers had played with Evelyn, when his conscience was clear and he could sleep without malignant nightmares that ate his soul.

Radford ran his thumb over Rebecca’s small hand, the feel of her soft skin drawing his mind away from the past. He halted behind Evelyn. “Need some help, Tomboy?”

Evelyn froze with the chain clenched in her tired, callused hands. There was only one person who had ever called her Tomboy. The last time she’d heard that nickname was the day Radford left for Syracuse with her father to join the 149th NY Volunteers.

Slowly, Evelyn turned to view a man she hadn’t seen since she was seventeen. Tall, lean, and proud, Radford still stood like a soldier. Power radiated from him, but there was a compelling warmth in Radford’s smile that drew Evelyn’s eyes to his. A breeze played with the dark hair tangled in his collar while Evelyn’s wandering gaze reacquainted her with Radford Grayson.

“Have I changed so much that you don’t recognize me?”

Evelyn flinched. What a hen-witted female she was to be gawking at Radford as if he was a prince from one of her girlhood stories. All the Grayson men were wickedly handsome. She shouldn’t have expected Radford to be anything less, but merciful heaven, she hadn’t expected him to be so...changed.

Drawing a deep breath, Evelyn strove for a calm she couldn’t quite manage. “Kyle and I thought you were coming in tomorrow or we would have picked you up at the train station.”

He waved aside her concern. “I hailed an omnibus in Dunkirk that brought us to Fredonia.” He shook his head, his dark eyebrows raised. “I didn’t realize the town had changed so much. The only thing familiar was the Common. The maple trees and twin fountains are looking older, but the parks are the way I remember them.”

“You walked clear out Liberty Street with Rebecca?” Evelyn asked, telling herself to stop staring, but unable to obey her own command.

“Did you stop to see Papa or your mother when you passed?”

Radford’s expression grew wistful as he surveyed the empty yard. “I wanted to come here first.” After seconds of silence, he turned back and frowned at the chain in Evelyn’s shaking hands. “Why isn’t Kyle helping you with this?”

“I can manage alone,” Evelyn said, though her hands ached from gripping the thick iron links.

“That doesn’t mean you should.” Radford took the burden from her and coiled it over his forearm with slow, measured movements that seemed to require little effort compared to her mighty struggle.

Evelyn flexed her stiff fingers. With the decline of her father’s health, she had, by necessity, found ways to manage their livery on her own. Though she realized she didn’t have the strength to lift a chain that size, she knew she could feed it into the wagon a few feet at a time. It wasn’t Kyle’s lack of consideration that had left her struggling on her own. He would have helped her had she only thought to ask him.

The Golden Age by Ajvaz, Michal
The Girl with the Phony Name by Charles Mathes
Darcy's Voyage: A Tale of Uncharted Love on the Open Seas by Kara Louise
CalledtoPower by Viola Grace
Rivals of Fortune / The Impetuous Heiress by Jane Ashford
Hope Springs by Sarah M. Eden
The Scourge of God by William Dietrich
The Enigmatic Greek by Catherine George
Revealing Kia by Airicka Phoenix
Until Darkness Comes by Melynda Price
Our partner