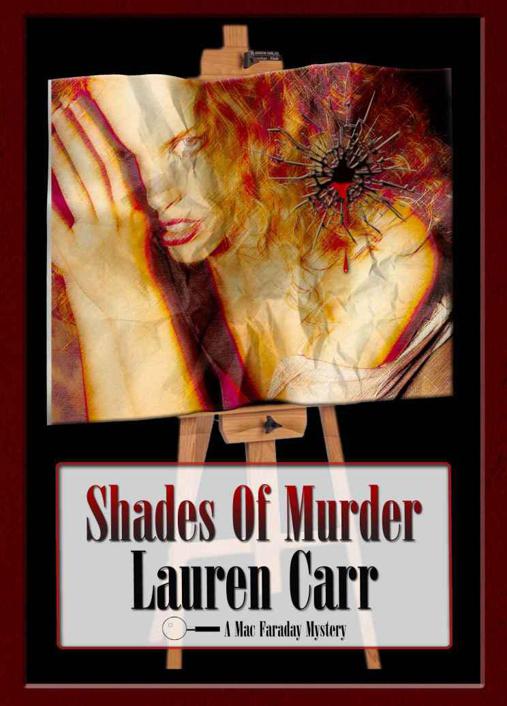 All Rights Reserved © 2012 by Lauren Carr

No part of this book may be reproduced or transmitted in any form or by any means, graphic, electronic, or mechanical, including photocopying, recording, taping, or by any information storage retrieval system without the written permission of the author.

To My Beloved Family

(in order of appearance)

Robin Spencer:
Queen of Mystery. World famous mystery author. Upon her death, it is revealed that as a teenager she had a son out of wedlock, to whom she has left her vast fortune. She is the love of Police Chief Patrick O’Callaghan’s life.

Neal Hathaway:
Multi-millionaire and CEO of Hathaway Industries, which builds and launches satellites.

Gnarly:
Mac Faraday’s German Shepherd. Only dog to be dishonorably discharged from the United States Army. Don’t ask them why. They refuse to talk about it.

Mac Faraday:
Underpaid homicide detective. His wife leaves him and takes everything. On the day his divorce became final, he inherited $270 million and an estate on Deep Creek Lake from his birth mother, Robin Spencer.

Peyton Kaplan:
Vice-President in charge of security at Hathaway Industries.

Joshua Thornton:
Hancock County, West Virginia, prosecuting attorney, former JAG lawyer. Retired after the sudden death of his wife Valerie left him to raise five children on his own. He is looking forward to a relaxing two-week vacation as an empty-nester—until he agrees to do a favor for the last person he expected to do a favor for.

Irving:
Cameron Gates’s cat. You’d have issues too if you looked like a skunk.

Admiral:
Joshua Thornton’s dog. The Irish Wolfhound-Great Dane mix has the heart of a chicken.

Special Investigator Harry Bush:
FBI agent. He has one more case he wants to close before he retires.

The one charm about marriage is that it makes a life of deception absolutely necessary for both parties.

“—and in other news … On Friday, prosecutors wrapped up their side in the murder trial for Oliver Cartwright in Pittsburgh, Pennsylvania.—”

While the radio announcer read off the morning report, David O’Callaghan poured his first cup of coffee. He dumped one spoonful of sugar into his oversized United States Marine Corps mug, a graduation gift from an old girlfriend, bestowed to him upon completing officers training.

The mug lasted longer than the girlfriend.

Taking his first sip of coffee, he gazed out the kitchen window of his parent’s cozy lakeshore house to admire the leaves flapping on the birch trees lining the shore. When he squinted his eyes, he could see a hint of gold on the tips of the leaves.

Tomorrow would be his day off to celebrate Labor Day. While everyone else was celebrating it today proper, he would be trying to keep them from killing themselves, or each other, around Deep Creek Lake.

The radio continued with the news at the top of the seven o’clock hour.

“—Lawyers for Cartwright will begin presenting their defense on Tuesday. Oliver Cartwright has confessed to raping and killing six women in and around the Pittsburgh area during the summer of 2003.”

Six?
David brought the mug to his lips for another sip.
I could have sworn Cartwright killed seven women. Where did I hear it was seven?

The ring of the phone broke through the chirping of the birds in the birch trees. David didn’t realize he was still half asleep until the hot drink splashed onto the breast of his white shirt. Cursing, he slammed down the mug to send more coffee spilling across the kitchen counter.

“Damn it!” He grabbed the dishtowel to mop up the coffee from his shirt. The phone was still calling out to him while he wiped off his silver police shield.

“Coming!” He grabbed the phone and braced it against his ear with his shoulder while wetting the dishtowel to continue the cleanup.

Hearing the lilt of Archie Monday’s voice coming through the phone line transformed his morning into a good day. Forgetting about the coffee, David stood up straight. “No. You’re up early.”

“I wanted to catch you before you went to work. Robin wants to know if you’re coming over for steaks on the grill after you get off.”

David stepped into the half-bath off the kitchen to check his reflection in the mirror. He ran his hand over his blond hair.
She’s on the phone, you dummy.
He went back to dabbing at the coffee on his shirt.

“Are you still there?” she asked him.

This isn’t going to work.
After tossing the dishtowel into the sink, he proceeded to unbutton his shirt.

“Let me think.” David slammed open the bedroom door in his search of a clean shirt. “Thick juicy steaks hot off the grill at Spencer Manor with two of the loveliest ladies on Deep Creek Lake, or hot dogs zapped in the microwave and a can of beer? What do you think?”

The sound of her laughter almost made him forget about his disgust over the dirty shirt. “What time should we expect you?”

Which means I’ll see you in your swimsuit.

David paused in his search for a clean shirt to imagine Robin Spencer’s stunning assistant in a bathing suit. It was something he had been yearning for since meeting Archie Monday.

A stern tone in her voice brought him back down to earth. “I should warn you. Robin’s working on a plotline that involves Marine Special Forces. Be prepared for an interrogation.”

Pushing the vision of Archie in a bikini from his mind, David shifted the phone from one ear to the other while shrugging out of his shirt. “Ah, so she’s using me.”

“Won’t be the first time I’ve been used by a woman.” It sounded like she was about to hang up when David stopped her. “What can I bring tonight?”

“Just your handsome self.”

He stopped her again. “Dad tells me that you’re a wine expert.”

He could hear the laughter in her voice when she replied, “I wouldn’t say I was an expert. Robin knows more about it than I do. But I’m learning. We’re working on expanding the Spencer Inn’s wine list. So we’ve been doing a lot of wine tasting lately. This week, we received a case from Burma. We’ll test it out tonight.”

“Now, I’m intimidated. I was going to offer to bring the wine tonight.”

“You can never miss with a good cabernet sauvignon.”

Making a mental note to stop by the wine shop in town to pick up a good bottle of red wine—not the cheap stuff—
You don’t serve the cheap stuff to one of the world’s most famous mystery writers and her beautiful assistant—
David finished dressing for the second time that day. He strapped on his utility belt with his gun, radio, baton, and cell phone.

Before slipping on his mirrored sun glasses to block out the bright morning rays reflecting off the water, David O’Callaghan paused to admire the platinum blond streaks that the sun and lake water had added to his already light hair. With his face and body bronzed after a summer of working and playing on the water, he looked even blonder than usual.

After taking a quick glance around the house to make sure everything was secured and put away, he stepped outside onto the front porch and locked the door.

Leaving an empty house was not part of his usual routine. His mother was always home during the day, but today was different. His parents had left two days before for a vacation at the Grand Canyon.

That was something else that was out of the ordinary. In all of his twenty-four years, David didn’t recall his parents ever going away together, anywhere, for anything. Police Chief Patrick O’Callaghan would travel to conferences or training, or his mother would check in to the hospital when she’d get sick.

Vacation? Together? What brought that on? Maybe Robin knows.

The Whitby Witches 1 - The Whitby Witches by Robin Jarvis
Meatonomics by David Robinson Simon
Footsteps in the Sky by Greg Keyes
A Song Twice Over by Brenda Jagger
The Girl in the Ice: A gripping serial killer thriller (Detective Erika Foster crime thriller novel Book 1) by Robert Bryndza
The Officer Breaks the Rules by Jeanette Murray
Strapped: A Second Chance Mafia Romance by Emma Spring
Gilt and Midnight by Megan Hart
Eternal by London Saint James
Her Best Friend's Brother by Nicolette Lyons
Our partner