Read Shadows in Me Online 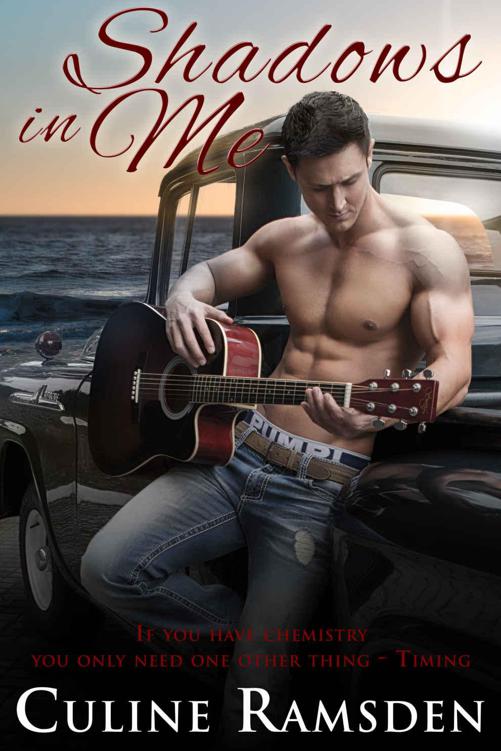 Names and characters appearing in this work are entirely fictitious.  Any resemblance to real people, living or dead is purely coincidental.  No part of this book may be reproduced, or stored in a retrieval system, or transmitted in any form or by any means, electronic or otherwise, without express written permission of the author.

I don’t own any of the brands i.e. Nike, CK, etc. or the music that might appear in the story.

This book is dedicated to my darling husband, Glenn.  We met when I was nineteen years old and he was seventeen.  What a combination, I was sweet and innocent, a farm girl from Kimberley, and Glenn was the bad boy type from Johannesburg.  Like so many love stories, our story started with boy meets girl, boy irritates girl to get her attention, then boy literally sweeps girl off her feet on a volleyball court.

We were so young, but I knew back then already it was true love.  I can honestly say I am more in love now than I was when we first met.  I often find myself thinking about our love for each other, and I know I’m one hell of a lucky lady.

Thank you to my friend and editor, Charlene Goncalves for making it look and sound perfect.

I want to thank my new cover model Jacques Fagan, wow, what an amazing person, humble, focused and inspirational.

Also a big Thanks to Gert Erasmus (cover design) and Tarryne Rautenbach (photographer).

Waking up this morning I knew in my gut something was going to go wrong, but orders were orders.  The sky was dark, mist so low you couldn’t even see the tops of the hills.  I had always wanted to come to Africa, but hell, not this derelict part of the country.   There was so much death in this area already, buildings blown up, people misplaced, and kids orphaned.

It was late afternoon, dark grey clouds hanging over us.  Walking down the narrow road I could feel their eyes burning into us, watching our every move.  But I couldn’t see them.  I needed to focus on what was happening around me, but I couldn’t get those blue eyes out of my head.  My thoughts of Caitlin were all that got me through the shit, hoping that one day I would get to see her again. I just wanted her to know the real me; I just wanted a chance to show her.

Twenty yards from the end of the street a bunch of kids were gathered around an old car, I could hear screaming coming from under the car.

Rick was the first one to approach the kids, Frank and Lester stayed by the Humvee, but something didn’t feel right.  As we walked up to them the kids scattered.

I looked around to see a white flash shoot up from the top of the building to the left of us, and it was as if everything changed into slow motion.  The Humvee flew into the air.  The smell of gun powder mixed with fresh blood hung heavy in the air.  It was mayhem.  Bullets came from everywhere.  One hit me in the stomach, thank God for my protective gear…it knocked the wind out of me but I managed to stay on my feet.  We had walked right into it.  It was really bad, I needed to get my men out of there.

“Rick, Rick where are you?” I started shouting. Trying to see through the shit was impossible, I needed to find my men, they were my responsibility.

“RICK where are you?” I called again, more desperate.

“Ghost, Frank and Lester were down and I couldn’t see Matt.”

“Hey, wake up” a soft hand on my heart pulled me from that horrid place.  I opened my eyes, with the moonlight coming through the window I could only just make out the silhouette leaning over me.  A beautiful curvy goddess, long hair cascading over her shoulders just covering the curves of her breasts.  I knew it wasn’t Caitlin, but when I closed my eyes every woman I was with was her.

“I’m fine, don’t stress.”  I lifted my hand and gently ran my thumb over her bottom lip that was still swollen from me claiming her just a few hours ago.  God, I am such a dog. But I need to be inside her again, I need to forget.

In one quick movement I flip her onto her back, pinning her under me.  I needed to taste her, to feel her all around me.  I licked and bit my way down to where I needed to be, I loved the way she panted my name, gripping my shoulders, her nails digging into me.  I was going to have her screaming my name soon, I buried myself in her and fucked out every dark shadow that was in my head. I loved watching a woman come undone under me, their eyes rolling back and their bodies reacting to my touch.  I collapsed next to her on the bed, my heart racing and my cock throbbing.

I turn my head to look at her, but what I saw wasn’t what I expected.  It wasn’t ecstasy it was pity. I hate that, I hate pity, it pisses me off.  I know it’s not fair to be pissed at Roxy she’s only human, and it’s a natural reaction to the night terrors she saw in me.

“What the hell?  We’ve just had sex!  Why do you have that look on your face?  Didn’t you enjoy yourself?”  I flipped the covers off and swung my legs off the bed.  I just needed to get away.  I grabbed my jeans off the floor.

“I’ll call you a cab, you better get home it’s late, and you have work tomorrow.  Cassy will be pissed if you’re late.”  I grabbed my phone from the night stand and walked out the room.  I looked at her reflection in the mirror as I left, I felt like shit, but that was just how it was!

The past three years have been hell, and the only image that’s pulled me back from the deepest darkest places is Caitlin.  I open the image on my phone that I took the day on the beach when I said “Good Bye”

It killed me to walk away from her that day.  All I wanted was to protect her, to take her away from all the pain.

I’ve kept in touch with Sam, Caitlin’s friend; she’s sweet but not my type.   Who was my type? Every girl I’ve ever brought home in some way, was Caitlin.  But from what Sam had told me, Caitlin was still free again and fair game.

Roxy was pissed.  She stomped through my place grabbing her scattered clothes. She hardly looked my way, almost slamming the door in my face when I tried to walk her out. I made sure she got in the cab alright and gave the driver $ 50 to take her home. I guess we wouldn’t be doing a sleep over again, but I just didn’t need complicated.

There was no sleeping after that for me, what was the point?  Either way I was in hell, on the one side it was death and destruction, the shadows of my past. On the other, the love for a woman, who wasn’t mine.

At least my music kept my mind focused.  I started the track to
I’d come for you, from Nickleback
.  The crowd at Duke’s loved it when I started with that one, little did they know it was for her, and her alone.

After coming back from hell, I always needed a place to crash, this time my mom was not an option, she and my dad were back together and from what she said to me in her last letter, I wasn’t welcome.  My Dad had charmed her again. God, I don’t know how a woman can fall for shit like that.  What was wrong with her, she’s been pushed and shoved, beaten and demoralized?  Who the hell will put up with shit like that?  I just don’t get it.

I came into town with just my duffel bag and my guitar. I left my truck with Grams before I left for Africa, and just hadn’t had the courage to go get it.  I knew I needed to go back to the farm but I just couldn’t, I needed to find myself first.

I had seen the sign “BARMAN NEEDED” at Duke’s, and applied.  Pete had a small apartment above the pub that I rented.  During the day I played barman and at night, Pete allowed me to entertain the locals.  Pete and his daughter Cassy, ran the place.

It had been six months, and I was starting to feel like I could finally put the shadows behind me.

It was after 12pm when I finally walked into Duke’s.  My head wanted to explode and my eyes felt like sandpaper.  I was already late for work but couldn’t think of an excuse – after all, I live right upstairs from the joint.

Cassy was gonna have my ass for lunch and dinner.  As tiny as she was, she could throw a punch.  I’d never let her know though that pissing her off just to see those cheeks of hers flair up, was the highlight of my day. Her jet black hair and chocolate brown eyes were such a pretty contrast to her pale white skin, and those amazing red lips and cheeks.  But in the end, it didn’t matter, she wasn’t Caitlin.  Caitlin was imprinted on my soul, I would always love her.

“You have a late one?  I see Roxy’s not coming in tonight, she told Dad she can’t work here anymore.  Please tell me you didn’t take her home last night!”

“What’s it to you if I did?”  I snapped back.  Fuck, I can’t believe she’s busting my chops about this.

“Oh my god, you did!!  She shot me a disgusted look. What is it with you and blondes?”  Cassy shook her head and turned around to walk away.

“They’re more fun in bed!” I smirked and walked towards the bar to put my guitar away.

“Oh piss off, just stop fucking the help, if you keep it up you won’t be on stage anymore and I’ll have your ass busting tables.”

“Yes, Cassy darling I will try my best to keep it in my pants.”  I said, sarcastically.

I got stuck in restocking the pub, true as nuts, Roxy did not come back.  The other girls gave me shit the whole day, maybe I should try fix it.  I was rude last night.  I really did need to try being more of a gentle man.

The night dragged on, and after Sam’s text things had taken a turn for the worst.  My gig was crap. Every song reminded me of my blonde princess.

By 1am I finished my last song, but then helped out behind the bar.  I really screwed things up with Roxy last night, now Cassy has to bust tables instead of working the bar.  I don’t like it when she works the tables, men can be such dogs.

By 2am she kicked the last of them out.  I stayed till she finished cashing up, then made sure she got home ok.  Pete’s been sick for a few days now; I could see Cassy was worried about him, but she didn’t trust me enough to talk to me about it.  From what the staff told me Cassy’s mom had passed away from Cancer when she was thirteen, and Pete raised her on his own.