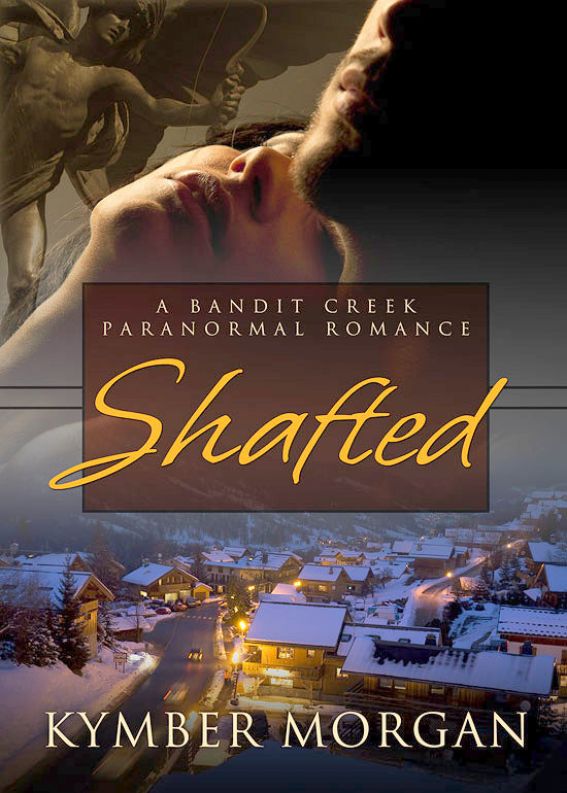 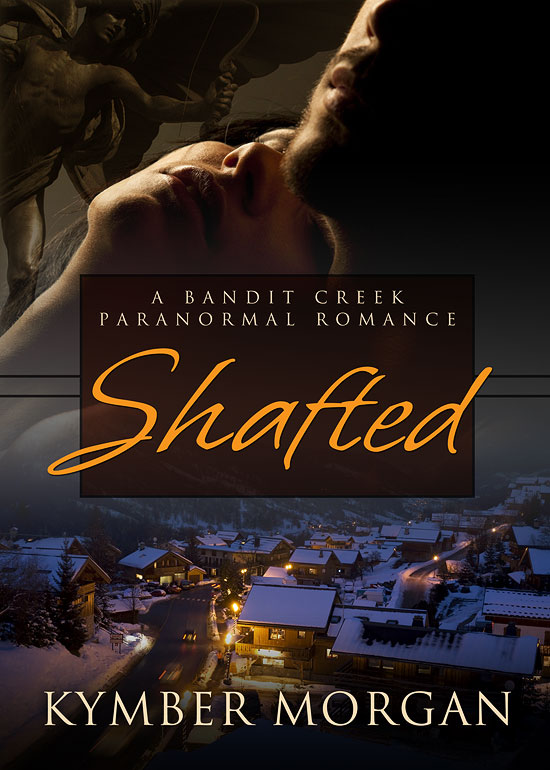 Is her love real or just a myth?

Returning to her summertime home of Bandit
Creek, Callie Jamison discovers there’s a lot more involved to her
grandmother’s legacy than a few cabins and some land, including a
curse. The last thing she needs now is to fall in love.

Anteros, dark twin of Eros, is responsible
for avenging unrequited love, a job that’s been a lot harder since
his brother succumbed to ambro-fever and has been running amok
shooting all the wrong people – including Anteros.

The clock is ticking, not only on his
immortality and Callie’s free will, but their hearts as well. Soon
they’ll each have to decide if the overwhelming attraction they
feel is the real deal or if they’ve simply been ‘Shafted’ and it’s
all a cruel illusion.

To my husband and personal alpha hero – thank
you for being my biggest supporter and reading my work over and
over and over again.... To my ‘Handler’ Susan, who has been there
from the beginning, without whom, I’d never make my pitching
appointments. And last but far from least, the awesome-dee-da-some
members of CaRWA (the Calgary chapter of RWA) and my fellow Bandits
- the most supportive and talented group of ladies and gent a girl
could ever have in her corner! (((Hugs))).

This ebook is licensed for your personal
enjoyment only. This ebook may not be re-sold or given away to
other people. If you would like to share this book with another
person, please purchase an additional copy for each recipient. If
you are reading this book and did not purchase it or it was not
purchased for you, please return to Smashwords.com and purchase
your own copy. Thank you for respecting the hard work of this
author.

Sneak Peek from the next Bandit Creek Books
Release

*A STRANGERS KISS by ROXY BUROUGHS*

Callie Jamison’s breath froze on the window
pane and she slowly drew a heart in the frost with the tip of her
finger. Next an arrow appeared, piercing the heart, distorting her
view of the snow coated evergreens and lonely lake below. Her room
at the B & B might not be as convenient as a motel in town, but
it was far homier and that view alone was worth the additional
price.

“Callie, of all places, why did it have to be
Bandit Creek? You could’ve picked anywhere else in the world and it
would’ve been better than there. Or how about staying here at home?
What was so wrong with that? Here you have family, friends and a
man who cares about you. What about him?”

She washed the heart away with a quick swipe
and leaned her forehead against the cold glass, shifting the phone
closer to her ear. “Mom, let’s not do this again. We both know this
isn’t about Bandit Creek. It’s about you and Grandee fighting and I
want nothing more to do with it.”

Callie turned away from the magical scene
outside and the heavy damask curtain fell back into place shrouding
the room in darkness. She turned on the desk lamp and started
sifting through the pamphlets fanned out on a side table. “She left
the place to me and assuming it’s still standing, my expenses will
be next nothing so it’ll give me some time to think about what I
want to do for the rest of my life. You know, figure out the big
picture. It’s as simple as that.”

“What about Christian, where does he fit in
the big picture?”

Callie’s eyes pinched shut. Ouch, that one
still stung and her response was sharper than intended. “Mom, we
had a deal. My personal life is no longer up for discussion.”

The heavy sigh on her mother’s end niggled at
Callie’s conscience. “Okay, honey, if you say so, but you could’ve
at least said good-bye face to face. He’s been so upset since you
left.” Callie’s end was silent. She hated it when they got into
this kind of discussion, it never turned out well.

Her mother was no fool, she knew Callie was
running, but she couldn’t stand by while her mother continued to
set herself up for tragedy after tragedy any longer. Coming to
Bandit Creek, curse or no curse, was all about avoiding the same
heartache and pain.

Last fall stepfather number three had been
lowered into the ground far too early, and the blank resignation
etched on her mother’s face during the service had branded an
eternal scar on Callie’s memory. Coupled with the weeks of guilt
ridden drinking her mother had drowned in afterward, it had been
the last straw. If only she could’ve figured out a way to leave
without adding to her mother’s pain.

“I know Mom, and I realize this is hard for
you, but please try to understand, this is the right thing for me,
so let’s drop it okay?” A certain cliché about silence and pins
dropping had time to pop through her head before her mother
responded.

“Okay fine, I give up, you’re a grown woman
and it’s your life.” The defeat on the line gave Callie’s
conscience another well deserved kick and tightened the growing
knot in her stomach. “But Callie, at least keep an open mind, don’t
give up on everything, please. Your Grandmother was a bitter old
woman who wanted everyone else as miserable as she was. Just…”

A picture of her grandmother flashed through
Callie’s mind. Tall and sturdy in a sleeveless black and red
lumberjack shirt chopping wood outside her cabin as strong and
enduring as the mountains around her. Callie’s heart tripped, it
was hard to believe she was actually gone.

“I know, Mom, use my own brain and listen to
my heart.” Which was exactly what she was doing - well the using
her brain part at least. Giving her heart a say risked suffering
like her mother.

The way her brain saw things, living in a
small town was bound to tip the scales in her favor. With only
three thousand people, avoiding romantic entanglements would be
easy. So far, of the admittedly good looking guys calling Bandit
Creek home, only one, the Deputy, Adam something-or-other was even
close to her type and rumor had it he was in a long distance kind
of thing.

“Callista, listen to me I know you cared
about her, but my mother’s beliefs were delusional and toward the
end particularly her thoughts were twisted and skewed by—”

The familiar feeling of being the bone
between two snarling dogs misted Callie’s vision. Why couldn’t the
two women she cared most about have just gotten along? “Okay, I’ve
really got to go now, Mom, it’s getting late, and I have to get up
early for my appointment at the lawyer’s office. We’ll talk again
soon. Love you. Bye.”

The end button stopped the diatribe of
complaints Callie could repeat by rote in its tracks. Her
appointment wasn’t really until near lunchtime but she couldn’t
face the whole ‘Grandee was a flake’ thing again at the moment.

Having already cataloged the tasteful tan,
green and beige pinstriped wallpaper, thick sage green carpet and
icy blue duvet cover and handwork accents scattered around the room
Callie’s gaze fell to the pile of glossy advertising she’d been
fiddling with.

Dragging a brochure for a local dating
service closer, there was an extremely good looking well built man
on the front, she dipped her head to get a closer look and snorted.
Airbrushing could sure do wonders. If real men were like that it
just might be worth risking some heartache. Too bad they only lived
in myths, movies and clever marketing gimmicks.

Flopping down in a nearby chair Callie leaned
her head against the back and shoved at her bangs snagging her ring
in the process. It was the only other thing she’d ever gotten from
her grandmother and would’ve been her mother’s if her mom hadn’t
refused it.

Thinking a cuss worthy of a mouth washing had
Grandee still been around, Callie gave a sharp tug to free it and
took out a thatch of long blond hair with it. “Ouch!”

As she unwound the strands from the setting,
the glittering depths of the twin ruby stones sent a shiver down
her spine. That same kind of sparkle and fire had lived in her
grandmother’s eyes whenever she went off on one of her tangents.
“Still giving me the eagle-eye and yanking my hair, hey
Grandee.”

The radiator clicked and rattled coming to
life with an undulating hum that sounded too much like her
grandmother’s chuckle for Callie’s sanity. The cozy homespun room
had suddenly become more stifling than welcoming.

Dinner wouldn’t be served for another hour so
Callie stuffed her arms in her ridiculously puffy but oh-so-warm
‘Michelin Man’ jacket; grabbed her camera and without locking her
room, was out the door.

Navigating the narrow oak staircase down to
the main floor, she passed the generous kitchen with quick smile
and head bob for Mrs. Turnbull, the B & B’s owner, feeling
lighter with every step.

After a few wobbling attempts she managed to
maneuver her wool encased feet into the new Sorrel winter boots
she’d left at the back entry and stepped out into the frost
shrouded sunlight of a late February afternoon in the Rockies.

The burn of frigid air hit the back of her
throat and frost instantly formed on her eyelashes but Callie
didn’t mind, caught up as she was in the first rays of sunset
inching across the ice and snow. All around, winter’s dull grey and
blue palette was magically transforming to pink and purple pastels
and if she was going to capture it with her lens she’d have to
hurry.

Every snow crunching step drove the argument
with her mother further from her mind and echoed in the still air
as Callie made her way as fast as she dared down the tricky path
leading to Lost Lake.

The closer she got to the bottom the more the
towering Ponderosa Pine sentinels encroached on the path, obscuring
the lake from her sight and giving the place a decidedly eerie
feeling. A feeling that probably had a lot to do with the myriad of
myths and legends attached to the place.

Some said a maze of mine shafts under the
lake bed made it bottomless. Or they hid a fortune in treasure if
you dove deep enough to find it, assuming of course you made it
back to the surface alive. Over the years, quite a few hadn’t.
Still hundreds tried every season, so far to no avail. Others told
of something strange inhabiting its depths and claiming the hapless
divers and other countless victims over the last century.

In her opinion, the fact no one had
pinpointed the cause of the flood that destroyed the original town
in 1911, drowning nearly all its residents in one night and forming
the lake in its wake, was more to blame for the stories than
anything that went bump in the night.