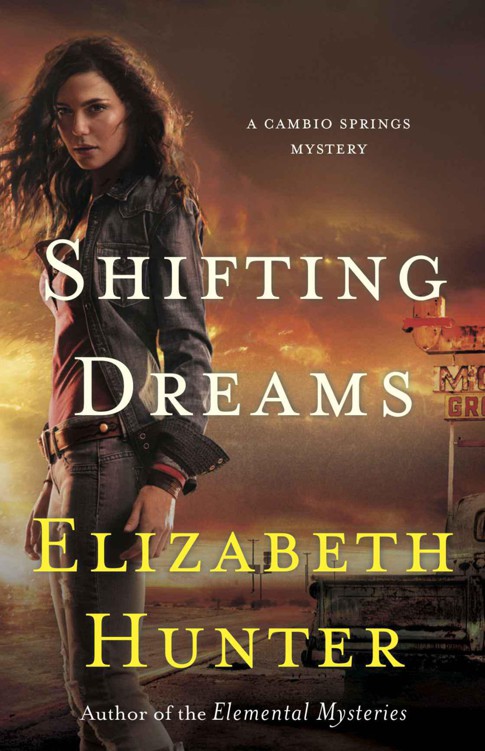 “If Jena knew anything from growing up in a town full of shapeshifters, it was this: Everything changed.”

Somedays Jena Crowe just can’t get a break. Work at her diner never ends, her two boys are bundles of energy, and she’s pretty sure her oldest is about to shift into something furry or feathery. Added to that, changes seem to be coming to the tiny town of Cambio Springs, big changes that not everyone in the isolated town of shapeshifters is thrilled about.

Caleb Gilbert was looking for change, and the quiet desert town seemed just the ticket for a more peaceful life. He never counted on violence finding him, nor could he have predicted just how crazy his new life would become.

When murder rocks their small community, Caleb and Jena will have to work together. And when the new Chief of Police isn’t put off by any of her usual defenses, Jena may be faced with the most frightening change of all: lowering the defenses around her carefully guarded heart.

Shifting Dreams
is the first novel in Cambio Springs, the new paranormal romance series from Elizabeth Hunter, author of the best-selling Elemental Mysteries.

To my crazy wonderful family:

I love every last one of you.

We’re like the Waltons… only with a lot more wine.

Thank you for always being my soft place to land.

Jena Crowe narrowed her gaze at the old man, whose eyes were twinkling with mischief. The corner of his silver mustache twitched a moment before the air around him began to shimmer like asphalt on an August day.

“Joe Quinn, you better not.” She lunged a hand toward him, but only caught the edge of an empty shirt before it fell to the tired, red barstool where Old Quinn’s pants had already pooled. An empty straw hat was the last thing to fall to the ground. “Quinn!” Jena darted out from behind the counter.

The bell on the diner door rang, and a scurrying shadow darted toward it. Jena’s grandmother almost tripped over the tiny creature as she made her way into the air-conditioning with four pies balanced in her hands.

“Goodness! Was that Joe Quinn?”

Jena ignored her for the moment, leaning down to swipe up the empty hat and charge out the door, her brown eyes locked on an old, red pickup parked under the shade of a Palo Verde tree on the far edge of the parking lot. She raised the hat and shook it in the dusty air.

“Quinn, I’m keeping this hat until you settle your damn bill!”

She saw the telltale shimmer on the far side of the truck; then Old Quinn appeared again, buck naked, sliding into the passenger seat and scooting over to roll down the window. “Aw now, Jena, don’t be hard on me. I’ll pay you next week. I promise. Throw an old man his pants, will you?”

“Not on your life. I hope the highway patrol gives you a ticket on the way home!”

Jena spun around and pulled the door closed to seal in the precious cool air. The temperature in the Mojave Desert was already in the 90s at breakfast time, and the radio said it would reach a sizzling 120 at the height of the day. She brushed the damp brown hair off her forehead and stomped behind the counter, reaching under the cash register for the hammer.

“That old snake,” she muttered as she searched a drawer for a nail.

“Shut up, Dev.” She glanced up with a scowl. “And can’t you arrest him for driving naked or something?”

“I probably could…” Dev glanced down at the sheriff’s star on the front of his shirt. “But I just got my eggs.” He went back to sipping his coffee and glancing at the messages on his phone.

“Why is there a pile of clothes here?” Jena’s grandmother, Alma Crowe, had set the pies on the counter and unboxed them. “Did Joe shift at the counter?”

“Yup.” Jena finally found a nail. “Right after I handed him his check.”

“He still hasn’t paid that tab? Sometimes I think that man has forgotten any manners his mother tried to teach him. Shifting at the counter and running out on his check. Does he have any sense?”

“Nope.” Jena raised a hand and aimed the nail right through the front brim of Old Quinn’s favorite hat. With a sharp tap, it was nailed up behind the register, right next to his nephew’s favorite Jimmy Hendrix T-shirt. “Typical Quinns,” she muttered, eyeing the T-shirt that had hung there since Sean Quinn had abandoned it—and the town—shortly after high school graduation.

Jena turned to the diner that was still half-full from the breakfast crowd. “The hat’s mine until he pays his bill. Someone want to toss those clothes out to the parking lot?”

She saw Dev snicker from the corner of her eye as he sent a text to someone. Alma opened up the pie rack and slid her latest creations in. And the youngest Campbell boy, who was busing tables for her until he left for college in the fall, quietly picked up the pile of clothes and took them somewhere out of her sight.

The boy’s grandfather, Ben Campbell, lifted an eyebrow and stared at the hat. “Remind me to pay my tab later, Jena.”

“I’m not worried about you, Mr. Campbell.” The worst of her anger taken out on the unsuspecting hat, Jena leaned over and refilled Ben’s coffee. “I doubt you’ve run from a debt in your entire life.”

He winked at her before turning his attention to Jena’s grandmother. “Now Alma, what did you bring to spoil my lunch today?”

The familiar chatter of her regulars began again, and Jena put the coffee pot back to start the iced tea brewing for the day. Alma and Ben Campbell started debating the best fruit pie for autumn. Missy Marquez, heavily pregnant, coaxed her four-year-old into another bite of eggs. Robert and John McCann glanced around and debated in low voices about what sounded like plans for a new house. Jena wondered who might be moving back to town while she wiped counters, filled glasses, and took orders.

When Jena had moved back to the Springs after her husband passed three years before, the last thing she had expected was to be running the family diner full time. Cooking at it? Sure. After all, she was a trained chef and this was the only restaurant in town besides The Cave, her friend Ollie’s roadside bar that sat on the edge of the highway. She expected to be cooking, but not running the place. Unfortunately, a year after she’d moved back, Tom and Cathy Crowe decided to answer the call of the road in their old Airstream and Jena had to take over. Now, her parents came back every few months for a quick visit while Jena ran the place and took care of the two boys she and Lowell had produced.

Was it the life she had planned for? No. But then, if Jena knew anything from growing up in a town full of shapeshifters, it was this: Everything changed.

Dev finally glanced up from his phone. His mouth curled in amusement as he looked at the old hat hanging on the wall. “Remind me not to piss you off. God knows what you’d nail up for everyone to see.”

“Since you don’t actually live here, Deputy Moon, that’s a tough call. But I’m gonna say those red silk boxers I saw hanging off of Mary Lindsay’s line would be the first thing.”

“Is that so?” She might have been imagining it, but she thought a red tinge colored Dev’s high cheekbones. It was hard to tell. Unlike Jena, who was only part Native American and still burned in the intense desert sun, Dev was full-blooded. His dark skin, black eyes, and lazy grin had charmed half the female population of Cambio Springs, including one of Jena’s best friends. But then, Dev had charm to spare, even though he knew better than to try it on her.

She said, “I think Ted’s coming in for lunch today. You sticking around?”

“And risk pissing off that wildcat? Nope. But I might go to The Cave tonight.”

“Sure am.” She heard the cook ring the bell and slide two
huevos rancheros
over the pass. Jena picked them up and slid them in front of two old farmers talking about football at the end of the counter. “Ollie asked me to help out this whole week. Tracey’s on vacation with Jim and the boys.”

“I’ll see you there. What are you doing with the boys if you’re working all week? Your parents in town?”

“No. Christy’s still home from college.” Christy McCann was her late husband’s youngest sister and her boy’s favorite aunt. “She’s hanging out this week while I’m working.”

The free babysitting would only last a few more weeks. It was August, and though the boys’ school had just started, the state colleges hadn’t. Jena would take advantage of the extra hand family provided as long as she could. After all, it was the reason she’d moved back.

“Hey, Jena,” Missy called. “Can I just get a to-go box for this plate?” Jena glanced up at the tired young mother and the preschooler with the stubborn lower lip.

“Sure thing.” She carried a Styrofoam box over to the booth. “You better be nice to your mama, Chelsea.”

“Thanks so much.” Missy began shoveling food into the carton.

“No biggie. You feeling okay?”

A wan smile touched the woman’s face. The mayor’s wife was working on number four. Jena had no idea how she did it. Her two boys ran her ragged.

“I’ll manage. My mom’s coming over in the afternoons now.”

Thank goodness for family. Jena patted Missy’s shoulder and ducked back behind the counter. Her boy’s aunt. Jena’s grandmother. Missy’s huge clan. It was a close-knit community, the one place their kind didn’t have to hide.

Tucked into an isolated canyon in the middle of the Mojave Desert, miles away from the state highway that the tourists drove, was the little town of Cambio Springs. It was an isolated town, made of the descendants of seven families who had made their way west over a hundred years before. Seven families that discovered something very unusual about the mineral springs that gave the town its name.

Dev stood and walked to the counter. “Well, I’m outta here, Jen. Did you see that Alex was back in town?”

“Really?” Jena looked up from the ketchup containers she was filling and walked over to the cash register. “Have you seen him?”

“Just saw his Lexus out at Willow’s.” Alex McCann was one of her late husband’s many cousins and one of her closest friends in high school. He’d moved, like so many of the younger people, when he went to college. Still, as the oldest McCann of his generation, she suspected he’d be back sooner or later.

“At Willow’s, huh?” She gave Dev a sly smile. Willow McCann, Alex’s sister, was one of the few girls Dev hadn’t bagged, and not for lack of trying. “He’s probably just out for a visit.”

“He still doing the real estate thing in L.A.?”

“As far as I know. There’s some kind of town meeting tomorrow night. His dad probably asked him to show up.”

Dev lowered his voice and glanced at Missy, who was married to the town’s young mayor. “Anything I need to be there for?”

Jena shrugged. Monthly town meetings were a tradition in the Springs, and the oldest members of the seven families made up the council. It was an archaic kind of government, but when you were running a town full of various shapeshifters, normal rules of city government didn’t always apply. Sure, they elected the mayor… but he pretty much did whatever the elders asked him to do.