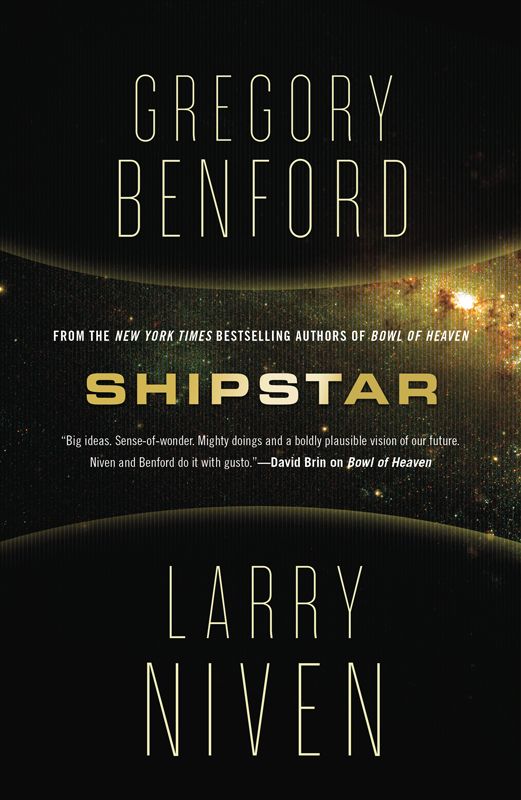 Copyright infringement is against the law. If you believe the copy of this e-book you are reading infringes on the authors’ copyright, please notify the publisher at:
us.macmillanusa.com/piracy
.

We conferred on scientific and literary matters with many helpful people. Erik Max Francis, Joe Miller, and David Hartwell gave detailed comments on the manuscript. And of course Olaf Stapledon and Freeman Dyson were first.

Bemor—Contriver and Intimate Emissary to the Ice Minds

the Adopted—those aliens already encountered and integrated into the Bowl

the Builders—the mix of species that built the Bowl

Part IX: On the Run

Part XII: The Word of Cambronne

I. How We Built the Books

It is better to be wrong than to be vague. In trial and error, the error is the true essential.

Memor glimpsed the fleeing primates, a narrow view seen through the camera on one of the little mobile probes. Simian shapes cavorted and capered among the understory of the Mirror Zone, making their way to—what? Apparently, to the local express station of mag-rail. Very well. She had them now, then. Memor clashed her teeth in celebration, and tossed a squirming small creature into her mouth, crunching it with relish.

These somewhat comic Late Invaders were scrambling about, anxious. They seemed dreadfully confused, too. One would have expected more of ones who had arrived via a starship, with an interstellar ram of intriguing design. But as well, they had escaped in their scampering swift way. And, alas, the other gang of them had somehow evaded Memor’s attempt to kill them, when they made contact with a servant species, the Sil. So they had a certain small cleverness, true.

Enough of these irritants! She would have to concentrate and act quickly to bring them to heel. “Vector to intercept,” Memor ordered her pilot. Their ship surged with a thrumming roar. Memor sat back and gave a brief clacking flurry of fan-signals expressing relief.

Memor called up a situation graphic to see if anything had changed elsewhere. Apparently not. The Late Invader ramship was still maneuvering near the Bowl, keeping beneath the defensive weapons along the rim. From their electromagnetic emissions, clearly they monitored their two small groups of Late Invaders that were running about the Bowl. But their ship made no move to directly assist them. Good. They were wisely cautious. It would be interesting to take their ship apart, in good time, and see how the primates had engineered its adroit aspects.

Memor counted herself fortunate that the seeking probe had now found this one group, running through the interstices behind the mirror section. She watched vague orange blobs that seemed to be several simians and something more, as well: tentacular shapes, just barely glimpsed. These shapes must be some variety of underspecies, wiry and quick. Snakes?

The ship vibrated under her as Memor felt a summoning signal—Asenath called, her irritating chime sounding in Memor’s mind. She had to take the call, since the Wisdom Chief was Memor’s superior. Never a friend, regrettably. Something about Asenath kept it that way.

Asenath was life-sized on the viewing wall, giving a brilliant display of multicolored feathers set in purple urgency and florid, rainbow rage. “Memor! Have you caught the Late Invaders?”

“Almost.” Memor kept her own feather-display submissive, though with a fringe of fluttering orange jubilance. “Very nearly. I can see them now. The primate named ‘Beth’ has a group, including the one I’ve trained to talk. I’m closing on them. They have somehow mustered some allies, but I am well armed.”

Asenath made a rebuke display, slow and sardonic. “This group
you
let escape, yes?”

“Well, yes, they made off while I was attending to—”

“So they
are
the escaped, I take it. I cannot attend to every detail, but this was a plain failure, Attendant Astute Astronomer. They eluded you.”

Memor suppressed her irritation. Asenath always used full titles to intimidate and assert superiority—usually, as now, with a fan-rattle. “Only for a short while, Wisdom Chief. I had also to contend with the other escaped primates, you may recall, Your Justness.”

“Give up everything else and get us that primate who can talk! We need it. Don’t fire on them. If they die, you die.”

Memor had to control her visible reaction. No feather-display, head motionless. “Wisdom Chief? What has changed?”

No answer. Asenath’s feather-display flickered with a reflexive blush of fear, just before she faded.

She was hiding something … but what? Memor would have to learn, but not now. She glanced at the detection screen, ignoring her pilot. Beth’s group had disappeared into a maze of machinery. There were heat traces in several spots, leading … toward the docks. Yes! Toward another escape.

There had been six of these Late Invaders when they escaped. Now the heat traces found only five, plus some slithering profiles of another species. Had one died or gone astray? These were a social species, on the diffuse hierarchy model, so it was unlikely they had simply abandoned one of their kind.

“Veest Blad,” she said to the pilot, “make for the docks. We’ll intercept them there.
Fast.
”

Tananareve Bailey looked back, face lined, sweat dripping from her nose. Nobody behind her now. She was the last, almost keeping up. Her injuries had healed moderately well and she no longer limped, but gnawing fatigue had set in. She was slowing. Her breath rasped and her throat burned and she was nearly out of water.

It had been a wearing, sweaty trip through the maze she thought of as “backstage.” The labyrinth that formed the back of the Bowl’s mirror shell was intricate and plainly never intended for anybody but workers to move through. No comforts such as passageways. Poor lighting. Twisty lanes a human could barely crawl through. This layer underpinning the Bowl was the bigger part of the whole vast structure, nearly an astronomical unit across—but only a few meters thick. It was all machinery, stanchions, and cables. Control of the mirrors on the surface above demanded layers of intricate wiring and mechanical buffers. Plus, the route twisted in three dimensions.

Tananareve was sweating and her arms ached. She couldn’t match the jumping style of her companions in 18 percent gravity without a painful clicking in her hip and ribs. Her pace was a gliding run, sometimes bounding off an obstructing wall, sometimes taking it on her butt—all assisted by her hands. It demanded a kind of slithering grace she lacked.