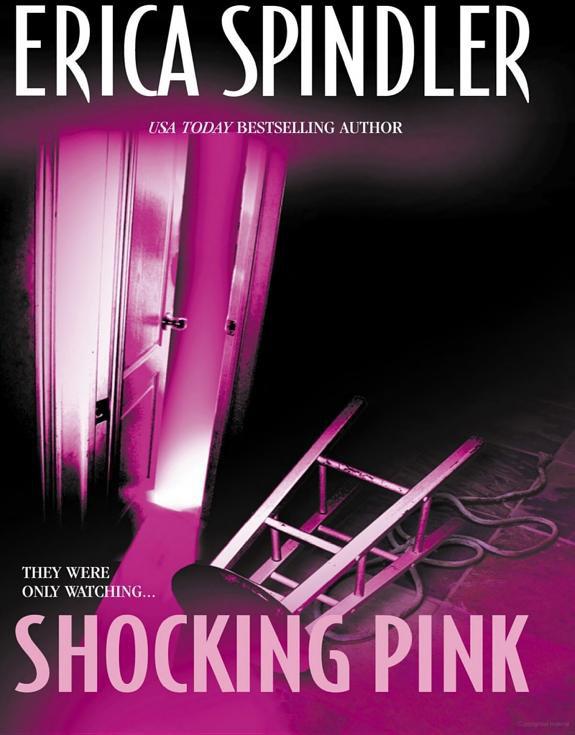 They were only watching.

The mysterious lovers the three girls spied on were engaged in a deadly sexual game no one else was supposed to know about. Especially not Andie and her friends, whose curiosity had deepened into a dangerous obsession….Now, fifteen years later, someone is watching Andie. Someone who won't let her forget the unsolved murder of "Mrs. X" or the disappearance of "Mr. X." Suddenly Andie doesn't know who her friends are…because loyalty can be murder.Andie. Julie. Raven.Three very different women bound by more than friendship.

Rave reviews for the novels of Erica Spindler

“A compelling story packed with authentic detail, Spindler’s novel chilled me to the bone!”

“Spindler has created a story that is sure to keep readers on the edge of their seats till the very last page.”

All Fall Down
is “shocking, emotional, an engrossing read.”

All Fall Down
is “a smooth, fast ride to the end. Spindler is at the controls, negotiating the curves with consummate skill.”

“Spindler’s latest moves fast and takes no prisoners. An intriguing look into the twisted mind of someone for whom murder is simply a business.”

—
Publishers Weekly
on
Cause for Alarm

“…a compelling tale of kinky sex and murder.”

Shocking Pink
is “one of the best, most frightening novels of the year.”

“Ms. Spindler spins an amazing tale of greed and obsession.”

There are many wonderful things about being a writer but for me, one of the most enjoyable is the opportunity to let my imagination run wild, day in and out. It’s great fun to create twisted villains and situations so perilous even I wonder how my hero will escape. Or, as in
Shocking Pink,
to create a deadly game of psychological cat and mouse between my heroine and her dangerous adversary.

A reader once told me that reading one of my books was like taking a vacation. As a writer, I could wish for no greater compliment. My aim is to entertain you. To take you away, to keep you guessing, to intrigue, engross and amuse with these characters and situations my imagination has given birth to. Doing so is another of the “most wonderful things” about being a writer.

My novels have evolved over time, from the rags-to-riches relationship story
Red,
to the pure suspense of my newest book,
Dead Run.
It’s been an exciting journey and each novel I’ve written represents a step in that journey. I’m delighted that four of my books—
Shocking Pink, Fortune, Cause for Alarm
and
All Fall Down
—are being republished to coincide with the celebration of my hardcover debut,
Dead Run,
in June 2002.

P.S. I love to hear from my readers. Please send me a postcard at: P.O. Box 8556, Mandeville, Louisiana 70470. Or contact me through my Web site: www.ericaspindler.com.

I’d like to express my heartfelt thanks and appreciation to the following people for their help and support during the writing of this book:

Jessica Schneider and Erin Engelhardt for honestly sharing their thoughts, feelings, hopes and wishes; for reminding me what it’s like to be fifteen and best friends.

Linda Kay West (as always) for answering my many questions about the law and legal proceedings.

Dianne Moggy and the amazing MIRA crew for helping me make this book all it could be.

Evan Marshall for his support, enthusiasm and incomparable instincts.

And special acknowledgment to Deanna Breheny, winner of my “Fantasy Proposal” contest.
Deanna, you and Jim are the greatest!

T
he call had come in at 3:01 a.m. An anonymous tip. Something weird was going on over at the Gatehouse development site, the caller had said. They had seen lights.

Something weird, all right. A homicide.

Detective Nick Raphael climbed out of his Jeep Cherokee, stopping a moment to take in the scene. Two black and whites, his partner Bobby’s truck and the coroner’s wagon. No press yet, thank God. An officer stood guard at the door of the model home, cordoned off with yellow tape.

Nick moved his gaze slowly over the face of the house, then the land around it, careful not to rush, not to take anything for granted. He had learned long ago that rushing equaled missed opportunities. He had learned that good police work required a quick mind, a slow eye and the patience of Job.

He rubbed his hand across his jaw, rough with his morning beard. Funny place for a murder. Or a brilliant one. Located twenty minutes east of Thistledown, in the middle of nowhere, the development was hardly even up and running. It had, no doubt, been created with the St. Louis executive in mind. Only a forty-minute commute to a better life, Nick thought, mouth twisting into a grim smile. In relatively crime-free Thistledown.

Right. And tonight’s little event wouldn’t do much for the neighborhood.

He brought his attention back to his immediate surroundings. So far, the development consisted of three model homes, this one complete and two others nearly finished. Pool and tennis court just under construction; lots parceled off. No residents yet. Completely deserted.

Not completely deserted, Nick thought. Not tonight. The anonymous tip proved that. So did the stiff.

Nick started for the front door, squinting against the light spilling from the house into the darkness. He greeted the officer at the door, the man’s rookie status apparent by his pallor.

Davis cleared his throat, his color turning downright pasty. “Female. Caucasian. Twenty-eight to thirty-two. The M.E.’s checking her out now.”

Nick swept his gaze over the face of the house again. Nice house. He’d bet it’d go for a half a million or more. He motioned with his head. “Everybody inside?”

The kid nodded again. “Straight ahead, then left. The living room.”

Nick thanked him and went inside, noting the alarm-system panel as he did. Fancy, all the bells and whistles. It was on but not armed.

He heard voices and followed the sound, stopping dead when he saw her. She hung by her neck, naked, her hands bound in front of her by a black silk scarf. An identical scarf had been used to blindfold her. A tall stool lay on its side under her dangling feet, a short one sat beside it, undisturbed.

“Holy shit,” he muttered, the past coming up behind him and biting him in the ass. “Holy fucking shit.”

“Raphael. Glad you could make it.”

Nick shifted his gaze to his partner. “I had Mara. It took her baby-sitter a few minutes to get to the house.” He moved his gaze back to the victim, his sense of déjà vu so strong it disoriented him. Nick forced himself to focus on this crime, this victim. He narrowed his eyes, studying her. She was—had been—a looker. Blond. Stacked. Even in death her breasts stood up high and firm. The blindfold covered too much of her face to be certain, but he’d bet the face had gone with the body. It just seemed to go that way with stiffs, though he couldn’t say why.

The coroner stood on a chair, carefully examining the corpse. He stopped working and met Nick’s eyes. “Hello, Detective.”

“Doc.” Like Nick, the M.E. had been around a long time. Long enough to remember. “Talk to me,” Nick said.

“Not a suicide,” the doctor said quietly. “Not an accident. Her hands are bound. Kind of hard to string yourself up that way. She definitely had a playmate.”

“We might,” the coroner said, returning to his examination. “Or it could be a copycat. No outward signs of a struggle. I think we’re talking consensual, up to the very end anyway.”

“Right,” Nick muttered. “Up to the moment the bastard kicked the stool out from under her.”

“Whoa.” One of the uniforms came up beside them. “What’s this ‘recognize’ bullshit? Have you guys seen something like this before?”

“You could say that.” Nick moved closer to the body. “Something just like this. Fifteen years ago. Right here in Thistledown. Unsolved.”

As Nick said the words he thought of Andie and her friends, their involvement in that crime. He remembered how they had been all those years ago, young and naive and frightened. But so full of life. And he thought of himself, of how he had been the same way.

Much had changed in fifteen years. He’d changed, in ways he never could have imagined.

Using tweezers, the coroner ever so carefully removed the blindfold, dropped it into an evidence bag, then tapped the body. It swung slightly in Nick’s direction.

Once again the past stared him square in the face, this time through lifeless blue eyes. Nick sucked in a sharp breath.

Not her. Dear Jesus, it couldn’t be.

He thought of Andie again. And of the events of fifteen years before. A knot, an emotion, settled in the pit of his gut, one he hadn’t experienced in a long time.

Aware of the other two men looking at him, waiting for an answer, Nick struggled to find his voice. “Yeah,” he managed to say finally, “I know who she is.”