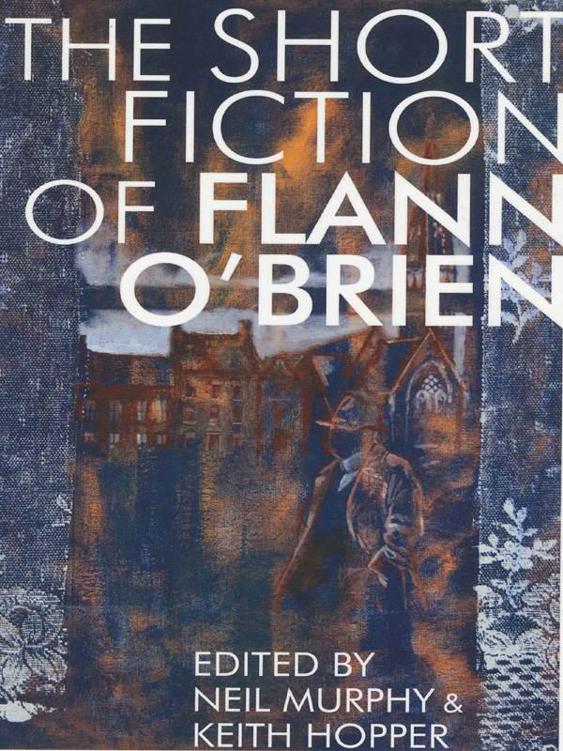 Other Works by Flann O’Brien

THE SHORT FICTION OF FLANN O’BRIEN

Edited by Neil Murphy and Keith Hopper, with translations from the Irish by Jack Fennell

A Note on the Texts

Revenge on the English in the Year 2032!

The Arrival and Departure of John Bull

The Tale of the Drunkard: MUSIC!

The Reckonings of Our Ancestors

The Tale of Black Peter

Scenes in a Novel

When I Met William of Orange

I’m Telling You No Lie

Drink and Time in Dublin

A
PPENDIX
I: For Ireland Home & Beauty

Strictly speaking, this story should not be written or told at all. To write it or to tell it is to spoil it. This is because the man who had the strange experience we are going to talk about never mentioned it to anybody, and the fact that he kept his secret and sealed it up completely in his memory is the whole point of the story. Thus we must admit that handicap at the beginning—that it is absurd for us to tell the story, absurd for anybody to listen to it and unthinkable that anybody should believe it.

Throughout his career, the concept of the invisible author remained at the heart of Brian O’Nolan’s (post-)modernist aesthetic—or as Myles na Gopaleen magisterially declared in 1964: “Compartmentation of personality for the purpose of literary utterance ensures that the fundamental individual will not be credited with a certain way of thinking and fixed attitudes. No author should write under his own name nor under one permanent pen name.” For scholars, though, this principle of pseudonymity has become something of a bibliographical minefield: O’Nolan claimed to have written under a whole host of pen names, not all of which have been discovered or confirmed. This present collection includes work from several of these known pseudonyms, and proposes consideration of at least one new one. In Irish (Gaelic), our shadowy author writes under Brian Ó Nualláin, while in English he splits into many personas, including Brother Barnabas, Flann O’Brien, Myles na gCopaleen, Myles na Gopaleen, Lir O’Connor, and, eventually, Brian Nolan and Brian O’Nolan. In an appendix to this volume, we have also included a story by John Shamus O’Donnell, another possible
nom de plume
; this is accompanied by an invitation to Flanneurs to further investigate its likely authenticity as a work attributable to Flann O’Brien.

For the purposes of consistency we retain the name “Flann O’Brien” for general comment, although the original pen names remain at the head of each individual entry. Because our selections are drawn from several periods and sources (newspapers, magazines, journals, anthologies, and archives), they speak to a range of the larger works and yet simultaneously ask to be considered in their own terms, thereby opening up new alleyways and backstreets of discovery for O’Brien aficionados. Far from fragmenting the voice of “Flann O’Brien,” the sheer multiplicity of pseudonyms—and the many posthumous, nameless, and playfully satirical narrators—ultimately act as a cohesive but dissonant statement that implicitly refutes the idea of a singular and authoritative centre of meaning. For O’Brien as much as Roland Barthes, the death of the author is the birth of the reader.

This anthology includes new translations of five Irish-language stories originally published in the early 1930s, prefaced with a brief introduction by the translator, Jack Fennell. These stories, while valuable in their own right, have interesting parallels with the early stories in English, and with the major novels which followed a few years later. “The Tale of Black Peter” (“Aistear Peadar Dubh”), and “Revenge on the English in the Year 2032!” (“Díoghaltais ar Ghallaibh ’sa Bhliain 2032!”), for instance, resonate strongly with the satire of Irish cultural politics that we later find in
An Béal Bocht
(first published in 1941; translated as
The Poor Mouth
in 1973). Similarly, “The Arrival and Departure of John Bull” (“Teacht agus Imtheacht Sheáin Bhuidhe”) includes a scathingly parodic treatment of Irish myth and legend, which gives advance notice of Flann O’Brien’s novelistic fascination with textuality and temporal play.

The same fascination with self-reflexive framing is evident in the English-language story “Scenes in a Novel,” although the subject-matter is less obviously fixated on Irish culture. This early story from 1934 shows the nascent stirrings of some of the artistic processes that O’Brien would later explore in
At Swim-Two-Birds
(1939), including the principle of “aestho-autogamy” and the character revolt against the despotic author. “Scenes in a Novel” also features the mischievous use of mock footnotes—“indeed, the whole incident reminded me forcibly of Carruthers McDaid”
*
—and it inaugurates that most unreliable of narrative voices, the mordant storyteller who is “probably posthumous.” Both of these elements, of course, prefigure the darkly comic machinations of
The Third Policeman
(completed in 1940; first published in 1967), which is increasingly regarded as O’Brien’s masterpiece.

Thus, several years in advance of his most important novels, many of O’Brien’s metafictional ideas had already emerged in embryonic form. This deconstructive playfulness is still evident in the early 1940s: “When I Met William of Orange” (1942) presents itself as a “Footnote to the Battle of the Boyne,” while “I’m Telling You No Lie!” (1943) purports to offer “Some leaves from the author’s salad days.” (Both of these stories, first published in the
Irish Digest
, are reprinted here for the first time.) In addition, stories such as “John Duffy’s Brother” (1940) and “Two in One” (1954) could be considered as useful companion pieces to O’Brien’s novels, but with their shape-shifting themes and absurdist techniques they also stand out as important examples of early postmodern fiction in their own right. Moreover, some of the later stories, such as “The Martyr’s Crown” (1950) and “Donabate” (1952), offer fascinating insights into the interregnum between the two periods of O’Brien’s novelistic output, i.e., between the exuberant novels of the early 1940s and the late, unexpected reprise in the early 1960s, which saw the publication of
The Hard Life
(1961) and
The Dalkey Archive
(1964). In these later stories and novels there is undoubtedly a shift in his aesthetic towards something slightly more realist, although the satirical focus remains consistent throughout. This contrarian impulse is still very much in evidence in his final unfinished novel,
Slattery’s Sago Saga
(c.1964–66), which is included in the third section of this volume.

Overall, this anthology gathers together previously unavailable or dispersed material under one reader-friendly roof. However, given the multiplicity of names that O’Brien used (or is reputed to have used), this is by no means a definitive collection. Instead, we offer it up as an initial act of recovery rather than a completist project. Even so, it is clear to us that several of these stories deserve proper critical attention as important works within the general trajectory of international metafiction and the Irish literary tradition(s). Consequently, this volume is also an invitation to Flanneurs—both seasoned and fledgling—to find their own resonances and significances, not just within and between individual stories but in comparison with the more canonical novels and newspaper columns as well. In this respect, our own—possibly controversial—inclusion of John Shamus O’Donnell’s “Naval Control” represents a speculative gesture designed to generate further discussion and discovery.

*
Who is Carruthers McDaid, you ask?

A Note on the Texts

The stories in this collection are drawn from several periods and a variety of sources. In most cases, we have chosen to reproduce the earliest published versions available, and these base texts have been cross-checked against later versions published elsewhere. Where possible, we have also cross-checked the base texts against the original typescripts and manuscripts held at two archives: the Brian O’Nolan Papers, 1914–1966 (1/4/MSS 051), Special Collections Research Center, Morris Library, Southern Illinois University, Carbondale; and the Flann O’Brien Collection, 1881–1991 (MS97-27), Archives and Manuscripts, John J. Burns Library, Boston College.

Any significant variations between the base texts and other extant versions have been flagged, although some minor discrepancies and typographical errors have been silently sub-edited. The punctuation, which varies a little from story to story, has been standardised (emdashes without spaces—for instance—is the preferred format, while we use three dots and a space for ellipses mid-sentence . . . and four dots for ellipses at the end of sentences. . . .). Throughout the volume, English and Hiberno-English spellings are used instead of the American forms.

A few cases merit specific mention. “John Duffy’s Brother” was first published in Dublin in the
Irish Digest
(June 1940), and later in New York in
Story
(July–August 1941); however, we have chosen to use the original (undated) typescript version held at Boston College as our base text. The rationale for this is relatively straightforward (insofar as anything is ever straightforward when dealing with Flann O’Brien). In the American version, there is a reference to a character who “had gone to sea at the age of sixteen as a result of an incident arising out of an imperfect understanding of the sexual relation”; in the more prudish Irish version, this reads as “an imperfect understanding of the world.” This says much about the draconian censorship code then in operation in Ireland—which O’Brien spent much of his career trying to subvert or circumvent—where anything signifying even the remotest sexual content was liable to be banned.
1
In turn, though, the American version has blandly smoothed out some of O’Brien’s more idiosyncratic linguistic usages; for example, his pedantically precise description of a train’s “four-wheel bogey” is changed to the more banal “four-wheel buggy.” Consequently, we have decided that the Boston College typescript represented the cleanest copy available. (There is also an early draft typescript in the archive at Carbondale dated “2.12.1938”; however, this is incomplete and underdeveloped, so we did not incorporate it into the base text. Nonetheless, it remains a fascinating resource for future genetic scholars.)

In the case of O’Brien’s unfinished novel,
Slattery’s Sago Saga
, the most complete and mature version is the one first published in Claud Cockburn’s
Flann O’Brien, Stories and Plays
(1973). However, we have re-edited this version in light of the original typescript held at Boston College (Cockburn, for all his recuperative virtues, sometimes has a rather heavy editorial hand). Unfortunately, that original typescript is incomplete, with three chapters having been mislaid. Therefore, this present text privileges the typescript version where possible, except for chapters two, three, and four, where we reproduce a slightly modified version of Cockburn’s text. (There is also an early, largely handwritten version of
Slattery’s Sago Saga
housed at Carbondale; we did not incorporate this manuscript into the base text as it is unreliably incomplete and largely underdeveloped.)