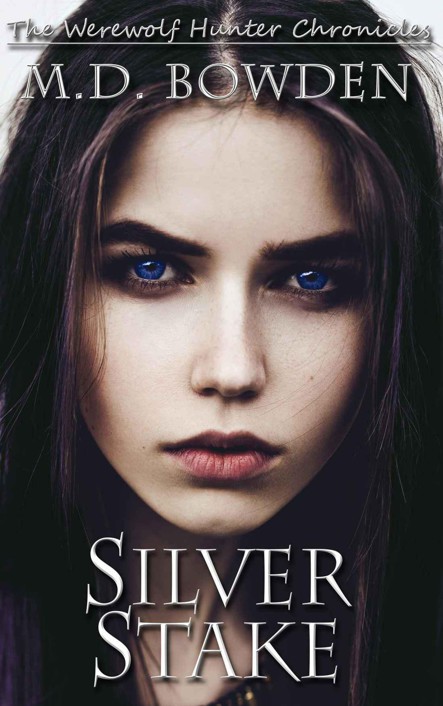 The Werewolf Hunter Chronicles, Book One

M.D. Bowden has asserted her moral rights to be identified as author of this work.

No part of this work may be reproduced without prior permission in writing from the author.

All characters in this work are fictitious.  Any resemblance to real persons, living or dead, is entirely coincidental.

Wilkinson’s Tools, a
large corrugated metal warehouse, stood on its own in the rough part of Liverpool.  Outside the night was eerily cloudless and still, but there was a dull bang, followed by a slow creak, breaking the silence.  Luke pulled the door open just enough to creep through, his faded-blue denim jacket protecting his body as he started to squeeze through the gap.  He had a girl with him, someone he’d met at a local club.

“Do you really think this place is deserted?” she asked, her voice high pitched and whiney.

He kicked aside a wooden crate blocking his way, and squeezed the rest of his body through the gap, extending his hand to hers before she could decide it wasn’t worth the risk.  She slipped through easily, her form petite next to his.  Her skin was clammy and cool to the touch, so he rubbed her hands between his to warm her up.  When she started to giggle he pulled her past more scattered wooden crates, most of which appeared to be empty, either looted or cleared by the failed business.  It was quiet inside, almost too quiet, and their footsteps were muffled by a thick layer of dust on the concrete floor.  He couldn’t see squat.

The girl by his side fiddled with something in her bag, then her phone screen lit up.  She shone it around the space, but the light didn’t penetrate far.

“Three years.  If we go upstairs there are some sofas in the old staff room…”

She pulled him to a halt and he turned to face her.

“I just, I-I don’t think this is a great idea.  It might be dangerous.”

“Hmm, do you think it’s dangerous here?”  He pulled her hips against his and looked down at her lips and then her breasts.  There were benefits of her keeping that phone light on.  She was hot stuff all right, with her sexy black bob, little short fringe and dark eye makeup.  But she wasn’t acting like the little seductress he’d taken her for.

She smiled shyly.  “I’m not sure,” she said, but as she spoke she looked down at his lips, and edged closer.

“You are sooo sexy,” Luke said, their lips getting closer.  His whole body was on fire for her, he couldn’t wait to strip off her shirt and…

“Don’t worry, it’s just us in here,” he said, trying not to groan.  He just wanted her to shut up and kiss him.

“I thought I heard footsteps,” she said, turning and shining her phone back towards the doorway.

He looked over her shoulder, annoyed now.  “No-one else would come in here.”  He was about to say it may have been a rat, but figured that might not be the best way to get her to calm down.  Instead he said, “Now come here.  I’ll protect you.”

“What if someone did follow us in?  It could be the Police…”

“If it was they would have arrested us already.  Don’t you think?  Heeeellooo?” he called out, his voice echoing back to them.  “See, we really are alone,” he said, his patience nearly running out.

“I do, and I also think it’s time to do this…” Luke said, approaching her from behind and slipping his arm under her top and around her tummy.  He was pleased when she shivered and turned back to face him, her silky hair brushing against his stubbly jaw.

“Ummm,” she whispered, and let him nuzzle his face against the skin of her neck.

He ran his lips up and along her jaw—

A bright light appeared in the door way and shone in his eyes.  “Put your hands up.”

Luke groaned, and the girl slapped his stomach before moving from his side and doing as she was told.

“I told you this was a bad idea,” she muttered.

The policeman took a step closer and shone his light in her face.

Luke blinked, trying to look properly at the girl by his side.  She was changing, her face … he couldn’t believe it.  Her pretty skin contorted, her mouth stretched wide and her canines widened and extended, at the same time as her nose grew, clothes ripped and the fine hairs on her face darkened and thickened until she was covered in thick black fur.  She let out a feral growl from deep in her chest.

Luke stood rooted to the spot as she sprang forward, clearing the gap to the policeman in seconds.  The officer screamed, dropping the torch, which went out as it hit the ground.  A second later Luke heard a gurgle as the scream was cut off.

Luke stumbled back in shock, but she was on him an instant later.  He wanted to get away, but she was ridiculously strong, and he was freaked.  He couldn’t move a muscle.  Her arms pulled his neck closer as he grunted in fear, and then her sharp teeth bit into his neck.  He started to scream from the pain, but fingers covered his mouth, smothering any noise.  His knees gave away and all around him went fuzzy and blurry.  Then it went black.

Maya tossed and turned in her sleep, images of lights flickering in the darkness, creeping into her REM cycle.  She was in a church, under the steeple, and bells rang around her.  She placed her hands over her ears to block out the noise.  There were clusters of altars, each holding dozens of flaming white church candles, turning the stained glass windows, scenes of the crucifixion and the Virgin Mary, into menacing shapes and colours.  She closed her eyes, too, but the lights kept flickering, and the noise was sooo loud.  Next she was in a graveyard staring at a cross tombstone, low misty clouds obscuring the sky.  A black bird cawed.  Then she was back in the church and the assault on her senses was still going on—too much sound, too much light.  She was back in the graveyard, and before her, standing by the tombstone, was a distorted monster, long muzzle, fangs dripping blood.  The monster approached her and she cowered against a grave.  It was getting closer…  Then the image changed and she was back in the church.  The bells stopped ringing and the candles stopped flickering.  She opened her eyes.  And there, in the shadows, a shape.  There was someone there, someone really tall...

Then she was back outside, the monster closer still, and she glanced behind it as the clouds swept across the sky, exposing a full moon.  Her mind couldn’t tell which was which as the moon and the monster blurred together and swirled into nothingness.  Then she was back in the church and all those candles, they were on again with their flickering, they just wouldn’t stop.  She squinted, trying to see through the light, there was still someone there, he wasn’t in the shadows anymore, he was standing on the altar, but she couldn’t see his face.  She was back in the graveyard.  She was in the church.  Her mind couldn’t settle to one thing, one place.  Then things shifted and she was in a computer lab.  Images flashed on the screen.  Wolves.  Howling.  Ripped up bodies.  Then one word replaced the images.  One word that made her scream.  Werewolves.  She screamed and screamed and screamed—

She pressed the button on the top of her alarm to shut out the noise, and then she groaned, pulling the covers over her head.

“Maya!” her mum called from downstairs.

She pulled the covers down and this time blinked against real light, sunlight, shining in through her window.  She hadn’t had time to put up curtains yet.

“Yeah Mum, I
am
awake,” Maya managed to shout, propping herself up on her elbows, still half asleep and disconcerted by the hectic images of her dream.

“It’s your first day, you better get up quick,” her mum shouted.

“I will!” Maya shouted back, and then to herself she muttered, “Like I could forget that.”

She eyed the unpacked boxes littering her new bedroom.  Then flopped back against her covers and burst into tears.  She couldn’t believe this.  Another new place.  Her what, fourth college in a year?  It was hard to keep track.

After she’d got
that
out of her system, she didn’t have long to get ready.  No time to even shower.  She put on the first pair of jeans she could find, no-longer caring about making a good impression.  She was done with trying to fit in.  When she felt she looked inconspicuous enough to leave the house she headed for the front door, but her Dad blocked her path out.

“No, no, of course not, but I couldn’t let you go off without saying goodbye.  You just never know…”

“I know,” Maya said, and she gave her dad a quick hug.

“You’ve had plenty of practice now, I’m sure you’ll settle in fine, and make some nice friends.”

“I’m not sure there’s much point in that.  Give it a month and we’ll be on to the next place.”

“We’ve covered our steps better this time.  They won’t find us, I’m sure of it.”

Maya nodded to her dad, and started to turn away.

Her mum hurried by and quickly kissed her cheek. “Have a good day, love,” she said.

Maya nodded to her parents and stepped out into the damn rain—she was sure it had been sunny when she woke up—and pulled up the hood of her coat.  The walk to college took half an hour, and she ended up jogging the final bit.  She didn’t want to be late for meeting the head teacher.

It was really hammering it down when she reached the college.  She squinted through the rain towards the arches of the entrance.  Dirty white buses pulled up by the pavement, and outpoured plenty of boys and girls dressed to impress their friends.  Maya sighed.  If only she could stay here long enough to get to know these people.

She dodged a couple of boys playing ball, rain streaming off their coats, and watched as a guy, in his attempts to protect his hair from the rain, narrowly avoided being run down by a cyclist.

Maya stood alone in the crowd of unfamiliar faces.

She sighed again, and looked up past all the faces, at the imposing building.  A large sign proclaimed the school to be ‘Liverpool Sixth Form’.  She strode up the stairs with a forced confidence, putting on a brave smile.

The Case of the Red-Handed Rhesus (A Rue and Lakeland Mystery) by Jessie Bishop Powell
Wilde Velvet by Longford , Deila
Bill Fitzhugh - Fender Benders by Bill Fitzhugh
Other by Karen Kincy
The Luxe by Anna Godbersen
Nothing Daunted by Wickenden, Dorothy
The Girl Next Door by Brad Parks
Fireworks in the Rain by Steven Brust
Find Me Where the Water Ends (So Close to You) by Rachel Carter
The Transference Engine by Julia Verne St. John
Our partner