“Did you walk me out here because you think I’m too old to make it alone, or did you have another agenda? You’ve thanked me enough for a while.”

I leaned against his truck and stared at him. “Well, I have a question, Sheriff. Just when do you intend to tell Sam the truth?”

He eyed me suspiciously. “Tell him the truth about what?”

I wrapped my arms around myself to stave off the cold. “The night I drove your truck from the orchard to the house, I went through your glove compartment. I was looking for evidence because I suspected you were the person who’d knocked me out.” I waited for his reaction, but his expression didn’t change. “I saw the picture. At first I didn’t recognize the people, but the boy seemed so familiar. It kept bothering me. And then a couple of days ago I remembered something you said to me when you pulled my car over on the way to Harmony. You mentioned blood ties. Finally everything clicked.”

He stared past me. “And what was it that clicked, Gracie?”

He didn’t say anything, just kept looking at something over my shoulder.

“That’s why you started hanging around, asking questions right after you took office. It’s also why you kept such a close eye on us throughout this whole ordeal. You were protecting your son. Actually, I should have figured it out sooner. When you pulled me over on the way to Harmony, probably so you could check me out to see if I was someone you wanted in Sam’s life, you made that strange comment about blood ties. You were talking about yours and Sam’s.”

Finally he met my gaze. I detected a shadow of apprehension in his eyes. “I didn’t know about him until two years ago. Bernie found me in Colorado. It wasn’t hard. I was the sheriff of a much larger area than this. She was sick. Real sick. She told me about Sam and gave me that picture. Then she told me where he was. Not long after that, I found out Morris County needed a sheriff because theirs had quit. I offered to fill in until a new sheriff was elected. Luckily, I won the election.”

“I can’t keep this from Sam for long, you know. If he finds out I knew and didn’t tell him… Well, I can’t take that chance. One thing I’ve learned since coming to Harmony is that secrets don’t keep here. Eventually the truth comes out. It would be best if you told him yourself, though. And soon.”

He nodded. “I know. But give me a little time, please. I want him to trust me before I tell him who I am.”

I patted his arm. “You saved my life, you know. I don’t think there’s much more you can do to get on his good side.”

He grunted. “I’ll tell you what. If you’ll keep my secret for a while, I’ll tell you one. And trust me, you really want to know this.”

“Okay. As long as you realize I won’t wait too long.”

He stuck his hand out. “Agreed.”

“I ran into Sam yesterday in Council Grove. He was coming out of Meyer’s Fine Jewelry.” He grinned at me. “He had a little black box in his hand and a great big smile on his face.”

He tipped his hat and started toward his car. But before he opened the door, he turned around and looked at me. “By the way, you’re right,” he said. “I was checking you out that day on the road to Harmony. Just so you know, you passed.” With that, he got in his car and took off.

I stood there and watched him drive away. I’d meant what I said about secrets. I’d had to tell Sam that Eric had kissed me, and that I’d told him about Sam’s mother. It wasn’t easy to confess, but I knew if we had a future together, he needed to know. He not only understood; he blamed himself for putting me in a situation where I felt I had no one to talk to. I think I fell in love with him even more at that moment—if it’s even possible. I’d keep Pat’s secret for a while. I owed them a chance to work it out. I prayed Sam’s decision to let go of the pain from his past would allow him to open his heart to his father.

Cora Crandall called out my name, and I waved to the three of them as they went into the restaurant to meet with Grant. I looked across the street to see Molasses hitched to Gabe and Sarah’s buggy, waiting to take her owners home. All in all, Harmony was back to normal.

Hopefully things would stay quiet for a while. I’d learned something important over the last few days. Just because a storm comes, it doesn’t necessarily mean you’ve stepped out of God’s will. It just means you have to find the rock God sends to hold you up. I had no doubt I was exactly where I was supposed to be. For a while I’d looked at the storm. From now on, I intended to keep my eyes on the Rock.

I looked up as the sun poked its head from behind the clouds
that had covered Harmony for quite some time. Today promised to be a beautiful day. Sam had asked me to dinner at a very nice restaurant in Topeka. He said he had something important to ask me. I headed into Mary’s with a smile on my face. Yes, today certainly promised to be an exceptionally beautiful day. 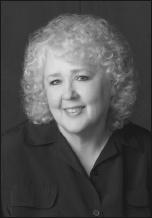 Nancy Mehl
is the author of six novels, one of which,
For Whom the Wedding Bell Tolls
, won the 2009 American Christian Fiction Writers’ Book of the Year Award in Mystery. Her new Harmony Series takes her a step away from the mystery genre she’s used to and into romantic suspense. “This series is a little different for me,” she says. “But that element of mystery has followed me to Harmony. I hope mystery readers will find a little something for them in this new venture. It has been so much fun creating the town of Harmony and getting to know the Mennonite people a little better. I hope I’ve done justice to their wonderful legacy and incredible spirit.”

Nancy lives in Kansas with her husband, Norman; their son, Danny; and a puggle named Watson. She spends her extra time with her volunteer group, Wichita Homebound Outreach.

Nancy’s Web site is
www.nancymehl.com
, and you can find her blog at
www.nancymehl.blogspot.com
. She loves to hear from her readers.