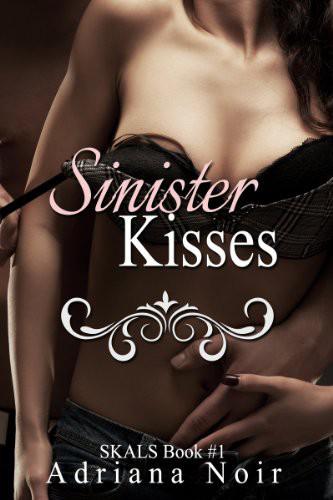 After a chance encounter in the woods leaves her shaken and reeling, the last thing Taylor McAvay wanted to do was accept an invitation to dinner. Then again, after seeing what Sebastian Baas was capable of, she felt she had little choice. The guy did just save her life, and the feel of his partner's assault rifle pressed against her cheek still lingered in her mind.

What she discovers surprises her. Beneath the armor and fatigues, is a smart, attentive, and sophisticated man. Unable to resist, Taylor finds herself drawn in by the Special Agent's charm. Everything about Sebastian, from his imposing presence to his hypnotic eyes, pulls her under his spell. When a drive by shooting leaves her apartment riddled with bullets, she falls under his command as well--not to mention the shadow of a lethal, underground organization known as SKALS.

Her lover has a dark and dangerous side he tries to keep hidden, but when a series of events sends their lives spiraling out of control, she realizes there is much more to him than meets the eye. Whether she wants to leave or not doesn't matter. Taylor soon learns, when it comes to Sebastian and SKALS, there is no escape.

No part of this book may be reproduced in any form or by any electronic, mechanical, or photocopying means including information storage and retrieval systems, without written permission from the author. The only exception is by a reviewer, who may quote short excerpts in a review.

Disclaimer:
This is a work of fiction. The author does not endorse, condone, or make any allegations of the book’s contents as being proper or true. It is intended for mature, adult audiences only.

To my beautiful parents, who always encourage me to go after my dreams and follow my heart, even if the path I take might not be the one you would choose. To Mara, who not only puts up with my obsessions, but understands them as well. “Sebby Nation!” And last but never least, to each and every reader out there. I love you all.

Tears stung Taylor’s eyes as sharp twigs snapped beneath her knees gouging the tender skin. The
barrel of a semiautomatic rifle prodded her damp cheek and threatened to capsize her. She whimpered, biting her lip as she fought to keep her hands locked behind her head. Her heart hammered. She was pretty sure she was going to get sick, and she could only pray it wasn’t on the polished boots parked mere inches away.

“
One move and I will blow your head off.”

Her gaze snapped up at the man’s deep growl. She shuddered as his dark b
lue eyes pinned her to the spot as surely as his gun. They were as soulless and deadly as a shark’s. Shivering, she struggled to speak past the lump wedged in her throat, but his narrowing stare cautioned against it. He kicked her sniper rifle to the side, a look of disgust crossing his stern features.

“So this is what it’s come to?” he asked. “Getting women to go their dirty work. Did you think you were going to put a bullet in me and my partner, princess?”

She shook her head frantically. Her stomach lurched and her arms trembled as she fought the urge to clamp a hand over her mouth. Snorting a shallow breath through her nose, she surveyed what was left of the group. Three men lay sprawled on their stomachs in the small clearing, their clothes riddled with gore and bullet holes. Another had crumpled near the edge of the woods. Even from her vantage point, Taylor could see the sinister red stain spreading across his back. She refused to look at the final man who’d fallen a mere foot to her right. The warm, sticky droplets of his blood still clung to her face and mingled with the thick, greasy feel of the camouflage paint she’d applied that morning.

“P-please…” she stammered. “I swear I d
on’t know anything. I have no idea who these people are. I don’t ev-even have a real gun. It’s an airsoft!” she cried.

She almost fell over with fright. The man’s fierce roar stabbed straight through her chest and threatened to stop her heart dead. It took everything she had not to crumble at his feet. Her teeth chattered involuntarily, clattering in a violent dance despite her best efforts to still her chin. The other man, his partner, turned to look their way and then crossed the clearing.

“Six cases, Josh. Mostly fully automatic weapons. There’s a few AKs and one grenade launcher. These boys meant to do some serious harm.”

Her captor nodded, his stare never leaving her. “It was a good bust. Fucking crazy paramilitary lunatics,” he muttered.

“What about this one? Where did she come from?”

Taylor glanced up, her eyes silently begging for reprieve as they locked with the most piercing green ones she’d ever seen. Her heart hammered when she found little compassion or mercy lurking in those pale shamrock depths. They flickered away from her to settle on his partner.

“I spotted her lurking near the edge of the woods. Probably some kind of lookout or scout.”

She paled as the other man shot her a dour glare. Her head shook in pleading.

“I was looking for my cousin. I swear. We were airsofting. I heard gu-gunshots and I got scared. I came up here looking for
Bryce to make sure he wasn’t hurt. I never saw these people before. Please don’t hurt me.”

His
stare narrowed, and he indicated to her rifle with a slight tip of his head. Taylor almost sagged with relief when his partner lowered his weapon and stepped away. Her respite was short lived. She forced a hard swallow as the other man crouched in front of her. Lean muscles and hard lines strained against his armor and black fatigues. He tugged off his helmet. Sweat clung to his skin and dampened the haphazard curls on his head. Pressing her lips together, she studied the tarnished silver crossbones on the lapel of his collar and stilled a fearful tremor.

“Playing, huh?” he asked
. His voice was soft and silken with a slight rasp. “How old are you, sunshine?”

A slight smile lifted one corner of his mouth. She couldn’t tell if it was genuine amusement or mockery. Not that it mattered. She would glad
ly take either over the press of a loaded gun.

“It’s a toy,
Baas, but that still doesn’t answer what the hell she was doing trapezing around these woods.”

“She was playing war games with her cousin,” he said
softly. He rocked to his feet with a quick and fluid grace. “Let her go, Josh.”

The other man shook his head. Taylor whimpered as his rifle swung in her direction and stopped short of the end of her nose. Her bladder throbbed and she pressed her thighs together with a shudder. “We can’t do that
Baas. Who the hell knows what she saw out here. We don’t need the heat. For all we know she’s full of it.”

“
So verify her story,” the curly haired one stated quietly, giving the other man a condescending look of reproach before turning his attention to her again. “What does your cousin look like? What was he wearing?”

She stuttered, stammering out the details as best she could remember. Her stomach rolled as Taylor prayed her memory didn’t fail her now. Luck had never exactly been on her side. Her mother had often laughed, calling it the curse of the Irish.
It had seemed like a great joke back then. Now, it felt more like a nightmare waiting to happen. Holding her breath, she waited, her heart pounding so hard, she swore her chest throbbed as the one called Baas relayed the information into a small earpiece and waited.

He looked younger and softer than his
partner did somehow, despite the chiseled angles of his cheekbones and jaw. With a straight, regal nose and lips that were neither too thin nor too full, he bordered somewhere between menacing and ruggedly handsome. It was hard to decide when those savage eyes and sweaty curls lent him a wild and slightly unstable look that chilled her to the bone.

She almost passed out from a lack of oxygen
by the time he finally nodded.

“The girl’s story checks out. They spotted a young man matching that description near the bluff.”

The dark haired man shook his head. “We still don’t know what she saw, or what she will say, Sebastian.”

“I didn’t see anything,” Taylor pleaded. “I mean ex-except for him,” she said jerking her head toward the corpse on her right.
“But he pulled a handgun. You were just doing your job.”

“See,” Sebastian said softly. “Come on, Josh. Let her go. She was just in the wrong place at the wrong time. She’s harmless.”

Josh snorted. “No one is harmless. You know that better than most, Baas.”

She flinched as Josh rounded on her. Her hands unlocked from behind her head and scrambled to find purchase behind her as she tumbled onto her
rear. His hulking body loomed over her and she bit back a cry as he gripped her jaw, his strong fingers sinking into her cheeks until the warm taste of copper rolled across her tongue.

“You got that right, sweetheart, because we’ll be watching you and listening. One word to anyone
, and I will hunt you down and blow that pretty little face of yours right off without so much as a blink. Do you understand that?”

Unable to nod in his brutal grasp, Taylor choked out a muted ‘yes
, sir.’ He released her with a shove and strode across the grassy clearing. Numb, she lay half-propped on her elbows and struggled to get her breathing under control. What the hell had she walked into? Who were these men, and what did he mean they’d be watching? She couldn’t contain her miserable shudder.

Taylor glanced up in surprise as a hand hovered in front of her face in silent offering. Swallowing, she let Sebastian ease her to her feet. His intense stare roamed over her. She slammed her eyes shut, bracing herself for a blow as he lifted his fist. The gentle brush of his thumb across her cheek was startling.

“You had blood on your face,” he explained quietly. “Are you okay?”

“That’s understandable. I’m sorry you had to see this, but you really shouldn’t be running around these woods by yourself. For one, it is private property, and it’s not safe for a young woman to roam around an area like this unprotected. There’s no telling what might have happened if one of those men had spotted you on his own.”

“Who were they?” she asked, her gaze darting over the fallen bodies. Each of them
was clad in green camouflage fatigues, most had a dangerous weapon strewn not too far from their side.

Trail Of the Apache and Other Stories (1951) by Leonard, Elmore
Watch Me: A Memoir by Anjelica Huston
Head Shot (A Thriller): A Crime and Suspense Thriller by Amore, Dani
Intentions of the Earl by Rose Gordon
Anne's House of Dreams by Lucy Maud Montgomery
Bark: Stories by Lorrie Moore
The Pirates of the Levant by Arturo Perez-Reverte
Midnight Frost by Kailin Gow
Ain't It Time We Said Goodbye by Robert Greenfield
Return to Me: #1 Love Gone Rogue Series by Kahlin Rogue
Our partner