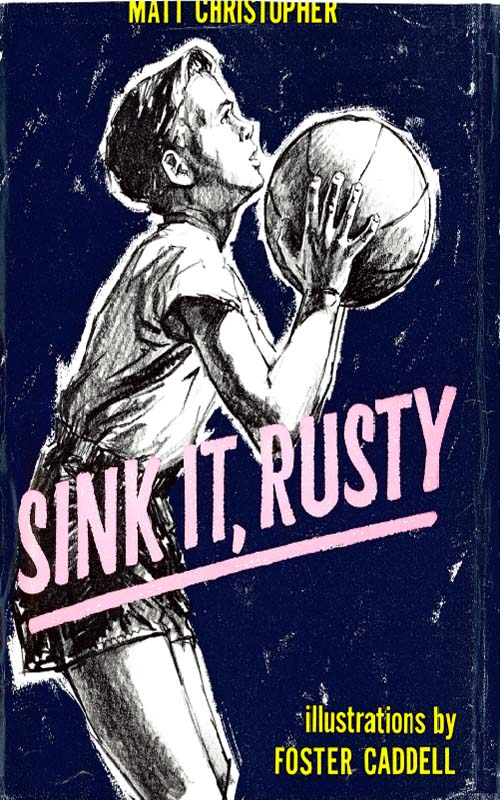 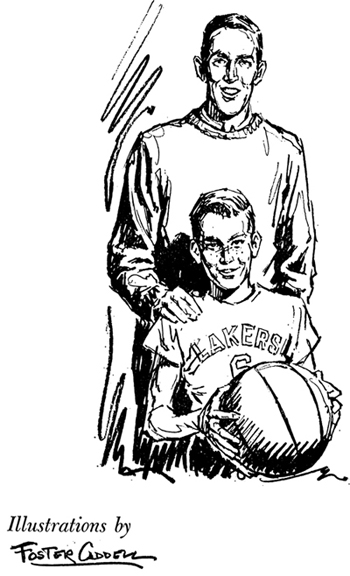 ALL RIGHTS RESERVED. NO PART OF THIS BOOK MAY BE REPRODUCED IN ANY FORM OR BY ANY ELECTRONIC OR MECHANICAL MEANS INCLUDING
INFORMATION STORAGE AND RETRIEVAL SYSTEMS WITHOUT PERMISSION IN WRITING FROM THE PUBLISHER, EXCEPT BY A REVIEWER WHO MAY QUOTE
BRIEF PASSAGES IN A REVIEW
.

to
John and Ann

R
USTY YOUNG
blew the whistle as hard as he could. The shrill sound pierced the big barn. It was so loud his own ears rang.

The boys on the floor stopped moving instantly. The tallest one stared at Rusty, his eyes cold and hard.

“You struck Joby's wrist when you stole the ball from him!” Rusty said. “I saw you!”

He trotted forward in his slow, awkward way, took the ball from Perry, and
handed it to Joby. “One shot,” he said.

Rusty didn't care. He'd call the fouls if he saw them, just like the referees did in the big games.

Joby stepped to the free-throw line. One of the boys had drawn it with white chalk a couple of weeks ago when the gang had
first started coming to the barn to play basketball.

Joby held the ball close to his chest and looked long and hard at the basket. Players stood on each side of the free-throw
lane, watching him. Rusty watched him,
too. He could not help smiling a little. Every time Joby tried a foul shot, his mouth hung wide open.

Joby shot. The ball hit the backboard, bounced back and fluttered through the net.

Joby's mouth snapped shut like a trap and he grinned.

Jim Bush caught the ball as it dropped from the basket. He stepped near the wall at one side of the backboard, passed the
ball to Perry. Perry dribbled it down-court.

Rusty followed him. For a moment he tried to keep up with Perry. Then he slowed down. His legs refused to obey his wishes.
He couldn't lift his knees as high as he wanted to. He couldn't take long strides.

That was why he was refereeing now instead of playing.

Mom and Dad said he was improving, though. He wished he could improve faster. He wanted to play basketball as well as the
boys did. And other sports, too.

Mom and Dad had often reminded him that he was much more fortunate than many other children. Some had serious effects from
polio for years and years, whereas he had got over the worst of his two years ago.

Two years! And he still wasn't able to run, jump, and do other things that his friends did!

Rusty pushed the thoughts from his mind. He watched Perry dribble toward the basket. Corny Moon was guarding Perry closely.
Quick as a wink, Perry dribbled past him and broke for the basket.
He went up, pushed the ball against the backboard, and scored two points.

The ball dropped to the floor. Rusty caught it on the bounce. He tossed it to a boy waiting to take it out. Then he saw a
movement near the corner of the room, and paused to get a better look.

A man had climbed the ladder from the floor below. He wasn't really too old —perhaps twenty-five. But boy, was he tall! Six-foot-four!
That's what the kids had said. His name was Alec Daws. His father had recently purchased the grocery store in Cannerville.
They were still a little like strangers.

He stepped onto the floor. A wide grin spread across his face.

For a second Rusty's gaze fell upon the
black glove Alec Daws wore on his left hand. He thought it was funny that Alec should wear only one glove.

The boys played awhile longer. Rusty blew the whistle a couple of times when he thought a foul was made. Both times the boys
on whom Rusty made the call yelled at him. And both times Rusty's face turned red.

“Here, Mr. Daws,” he said, holding the ball out toward the tall onlooker. “You ref.”

“No. You're doing all right,” said Alec Daws.

Alec Daws smiled, shrugged, and accepted the ball from Rusty.

Rusty went to the side of the floor and sat down. The boys played more carefully
now that Alec was refereeing. But while Rusty watched, an ache started inside him. An ache to be on the floor, to run. An
ache to scramble after the ball, to dribble it, and to shoot for the basket. 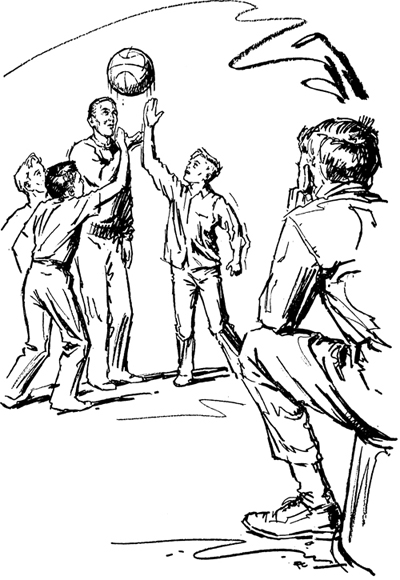 After a while, when the action was taking place near the farther basket, he went to the ladder and climbed down.

He was glad nobody was around to see his face when he reached the bottom.

He walked outside into the cool night air. A high moon hung like a glowing crystal ball in the sky. It was about seven o'clock.
Mom and Dad expected him home soon, anyway.

He got to thinking about his future. It looked very dim. Alec Daws had taken interest in the boys' playing basketball. He
would be coming to the barn more often
now. No doubt he understood the game well. At least, well enough to know how to referee.

All at once Rusty didn't like Alec Daws. He didn't like him at all. Alec had come and taken away from him the one thing he
was able to do — referee.

The evening was so quiet Rusty could hear the soft whisper of the creek water to his left. He walked alongside the concrete
wall and watched the moonlit water glisten like patches of silver. He reached the bridge, crossed it, and started down the
paved road.

On the right was a park. Picnic benches stood empty under shadowy trees. Beyond the park was Cato Lake, a dark-blue mirror
under the pale moon.

Ahead, on the left, was the Dawses'
grocery store. A dim, yellow light beamed out from its big window. The store was closed.

Rusty looked up at the hill behind the store. It was steep, covered with pine trees, elms, and oaks. On top of the hill he
could see the outline of a house. Other houses were up there, out of his view. One of them was his.

Rusty paused. He could continue on his way home by taking the road. It led past the store, wound around the hill and up to
the houses. But now he wanted to take the shortcut. He would climb the steep hill.

He walked behind the store, reached the bottom of the hill, and began climbing. He discovered that the dark tree-shadows made
it hard to see. The footing
was difficult, too. The ground was hard as rock.

He slipped on dead leaves and clutched a tiny sapling to keep from falling. He helped himself upward by pulling on the saplings.
By the time he was a third of the way up the hill his legs ached. His arms were tired. He wished now he had taken the road.

Suddenly, he slipped again. He reached out in the darkness for a sapling or some brush to stop his fall. He grabbed at a thin
branch. But he fell so quickly that the branch slid through his hand. He rolled down the hill, panic filling his heart. Twigs
snapped loudly as he rolled over them.

Finally, he struck the wide base of a tree. He lay still a moment, breathing hard. 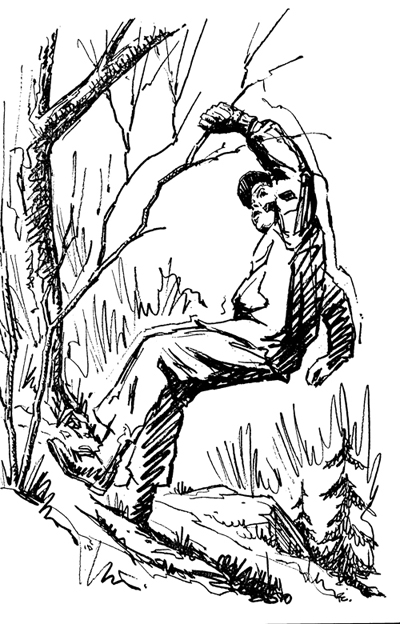 His breathing was the only sound he heard in the very still night. He shuddered and wondered if he was hurt.

R
USTY
got up. He wasn't hurt. He brushed the dirt off his clothes. He swallowed and pressed his lips tightly together.

Just then a voice from the direction of the barn broke the stillness of the night.

He could see Joby running swiftly toward the bridge. Carefully, Rusty
climbed down the hill. He reached the bottom and walked out of the shadows. Joby came running toward him.

“Rusty!” he shouted. “What were you doing up there?”

“I wanted to take the shortcut,” said Rusty, ashamed. “Nobody else ever had trouble climbing that hill.”

“I know,” replied Rusty. “Guess that's why I fell. If it hadn't been for a tree, I might have rolled all the way to the bottom.”

“You fell?” Joby's voice pierced the night air. “You sure were nutty trying to climb that hill! Come on. Let's take the road.
I'm going home, too.”

They walked to the paved road and followed
it around the hill. Lights on poles blazed the way.