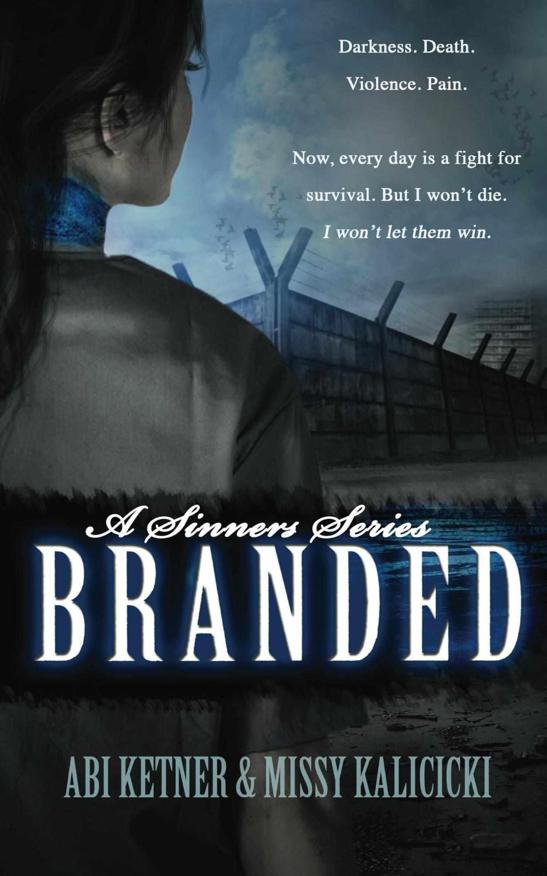 By Abigail Ketner and Melissa Kalicicki

This book is a work of fiction. Names, characters, places, and incidents are products
of the author’s imagination or are used fictitiously. Any resemblance to actual events,
locales, or persons, living or dead, is entirely coincidental.

All rights reserved, including the right to reproduce this book or portions thereof
in any form whatsoever.

Please visit our websites at
www.abiandmissy.com

The author acknowledges the copyrighted or trademarked status and trademark owners
of the word marks mentioned in this fiction.

Professional editorial services by
The Eyes for Editing

Interior design by Amy Eye at
The Eyes for Editing

My sons, Brayden and Jacob

I’m buried six feet under, and no one hears my screams.

The rope chafes as I loop it around my neck. I pull down, making sure the knot is
secure. It seems sturdy enough. My legs shake. My heart beats heavy in my throat.
Sweat pours down my back.

Death and I glare at each other through my tears.

I take one last look at the crystal chandelier, the foyer outlined with mirrors, and
the flawless decorations. No photographs adorn the walls. No happy memories here.

I’m ready to go.
On the count of three.

I inhale, preparing myself for the finality of it all. As I drop my hands, a glimmer
catches my eye. It’s my ring, the last precious gift my father gave me. I twist it
around to read the inscription. Picturing his face forces me to reconsider my choice.
He’d be heartbroken if he could see me now.

A door slams in the hallway, almost causing me to lose my balance. My thoughts already
muddled, I stand waiting with the rope hanging around my neck. Voices I don’t recognize
creep through the walls.

Curiosity overshadows my current thoughts. It’s late at night, and this is a secure
building in High Society. No one disturbs the peace here—ever. I tug on the noose
and pull it back over my head.

Peering through the eyehole in our doorway, I see a large group of armed guards banging
on my neighbors’ door. A heated conversation ensues, and my neighbors point toward
my family’s home.

It hits me. I’ve been accused and they’re here to arrest me.

My father would want me to run, and in that split second, I decide to listen to his
voice within me. Flinging myself forward in fear, I scramble up the marble staircase
and into my brother’s old bedroom. The door is partially covered, but it exists. As
I push his dresser aside, my fingers claw at the opening. Breathing hard, I lodge
myself against it. Nothing. I step back and kick it with all my strength. The wood
splinters open, and my foot gets caught. I wrench it backward, scraping my calf, but
adrenaline pushes me forward. The voices at the front door shout my name.

On hands and knees, I squeeze through the jagged opening. My brother left through
this passage, and now it’s my escape too. Cobwebs entangle my face, hands, and hair.
At the end, I feel for the knob, twisting it clockwise. It swings open, creaking from
disuse. I sprint into the hallway and smash through the large fire escape doors at
the end. A burst of cool air strikes me in the face as I jump down the ladder.

Reaching the fifth floor, I knock on a friend’s window. The lights flicker on, and
I see the curtains move, but no one answers. I bang on the window harder.

“Let me in! Please!” I say, but the lights darken. They know I’ve been accused and
refuse to help me. Fear and adrenaline rush through my veins as I keep running, knocking
on more windows along the way. No one has mercy. They all know what happens to sinners.

Another flight of stairs passes in a blur when I hear the guards’ heavy footfalls
from above. I can’t hide, but I don’t want to go without trying.

Help me, Daddy. I need your strength now.

My previous desolation evolves into a will to survive. I have to keep running, but
I tremble and gasp for air. I steel my nerves and force my body to keep moving. In
a matter of minutes, my legs cramp and my chest burns. I plunge to the ground, scraping
my knee and elbow. A moan escapes from my chest.

“Stop!” Their voices bounce off the buildings. “Lexi Hamilton, surrender yourself,”
they command. They’re gaining on me.

I resist the urge to glance back, running into what I assume is an alley. I’m far
from our high-rise in High Society as I plunge into a poorer section of the city where
the streets all look the same and the darkness prevents me from recognizing anything.
I’m lost.

My first instinct is to leap into a dumpster, but I retain enough sense to stay still.
I crouch and peek around it, watching them dash by. The abhorrent smell leaves me
vomiting until nothing remains in my stomach. Desperation overtakes me, as I know
my retching was anything but silent. My last few seconds tick away before they find
me.

I push myself to my feet and look left, right, and left again. Their batons click
against their black leather belts, and their boots stomp the cement on both sides
of me. I shrink into myself. Their heavy steps mock my fear, growing closer and closer
until I know I’m trapped.

I stand defiant. I refuse to bend or break before them, even as I shiver with fear.

“There’s no reason to make this difficult. The more you cooperate, the smoother this
will be for everyone,” a guard says.

I cringe into the blackness along the wall. I’m innocent, but they won’t believe me
or care.

The next instant, my face slams into the pavement as one guard plants a knee in my
back and another handcuffs me. A warm liquid trails into my mouth. Blood. Their fingers
grip my arms like steel traps as they peel me off the cement. The tops of my shoes
scrape along the ground as I’m dragged behind them until they discard me into the
back of a black vehicle. The doors slam in unison with one guard stationed on each
side of me, my shoulders digging into their arms.

Swallowing hard, I stare ahead to avoid their eyes. My dignity is all I have left.
The handcuffs dig into my wrists, so I clasp them together hard behind me and press
my back into the seat, unwilling to admit how much it hurts.

Did they need so many guards to capture me?

I’m not carrying any weapons, nor do I own any. I don’t even know self-defense. High
Society frowns on activities like that.

The driver jerks the vehicle around and I try to keep my bearings, but it’s dark and
the scenery changes too fast. Hours pass, and the air grows warmer, more humid the
farther we drive. The landscape mutates from city to rolling hills. They don’t bother
blindfolding me because they escort all the sinners to the same place—the Hole. Twenty-foot
cement walls encase the chaos within. There’s no way out and no way in unless they
transport you. They say the Hole is a prison with no rules. We learned about it last
year in twelfth grade.

To the outside, I’m filth now. I’ll never be allowed to return to the life I knew.
No one ever does.

“All sinners go through a transformation,” one of the guards says to me. His smirk
infuriates me. “I’m sure you’ve heard all kinds of stories.” I don’t respond. I don’t
want to think about the things I’ve been told.

“You won’t last too long, though. Young girls like you get eaten alive.” He pulls
a strand of my hair up to his face.

Get your hands off me, you pig.
I want to lash out, but resist. The punishment for disobeying authority is severe,
and I’m not positioned to defy him.

They’re the Guards of the Commander. They’re chosen from a young age and trained in
combat. They keep the order of society by using violent methods of intimidation. No
one befriends a guard. Relationships with them are forbidden inside the Hole.

Few have seen the commander. His identity stays under lock and key. His own paranoia
and desire to stay pure drove him to live this way. He controls our depraved society
and believes sinners make the human race unforgivable. His power is a crushing fist,
rendering all beneath him helpless. So much so, even family members turn on each other
when an accusation surfaces. Just an accusation. No trial, no evidence, nothing but
an accusation.

I lose myself in thoughts of my father.

“Never show fear, Lexi,” my father said to me before he was taken. “They’ll use it
against you.” His compassionate eyes filled with warning as he commanded me to be
strong. That was many years ago, but I remember it clearly. My father. My rock. The
one person in my life who provided unconditional love.

“Get out,” the guard says while pulling me to my feet. The vehicle stops, and I’m
jerked back to reality. The doors slide open and the two guards lift me up and out
into the night. A windowless cement building looms in front of us, looking barren
in the darkness.

The coolness of the air sends a shiver up my spine. This is really happening. I’ve
been labeled a sinner. My lip starts to quiver, but I bite it before anyone sees.
They shove me in line, and I realize I’m not alone. Women and men stand with faces
frozen white with fear. A guard grabs my finger, pricks it, and dabs my blood on a
tiny microchip.

I follow the man in front of me into the next room where we’re lined up facing the
wall. Glancing right, I see one of the men crying.

“Spread your legs,” one of the guards says.

They remove my outer layers and their hands roam up and down my body.

What do they think I can possibly be hiding?
I press my head into the wall, trying to block out what they’re doing to me.

“MOVE!” a guard commands. So I shuffle across the room, trying to cover up.

Five of us sit in the holding room. One by one, they pull people into the next room,
forcing the rest of us to wonder what torture we’ll endure. An agonizing amount of
time passes. I lean my head back and try to imagine a place far away. The door opens.

A guard escorts me out of the room, and I don’t have time to look back. As soon as
the door closes, they pick me up and place me on a table. It’s cold and my skin sticks
to it slightly, like wet fingers on an ice cube. Then they exit in procession, and
I lie on the table with a doctor standing over me. His hands are busy as he speaks.

MERCILESS (The Mermen Trilogy #3) by Mimi Jean Pamfiloff
The Liminal People by Ayize Jama-everett
The Anti-Social Behaviour of Horace Rumpole by John Mortimer
To Dare the Duke of Dangerfield by Bronwen Evans
GHOST_4_Kindle_V2 by Wayne Batson
Get Out or Die by Jane Finnis
Taken by Storm by Kelli Maine
The Case of the Mixed-Up Mutts by Dori Hillestad Butler, Jeremy Tugeau
The Old Meadow by George Selden
Beyond Belief by Cami Ostman
Our partner