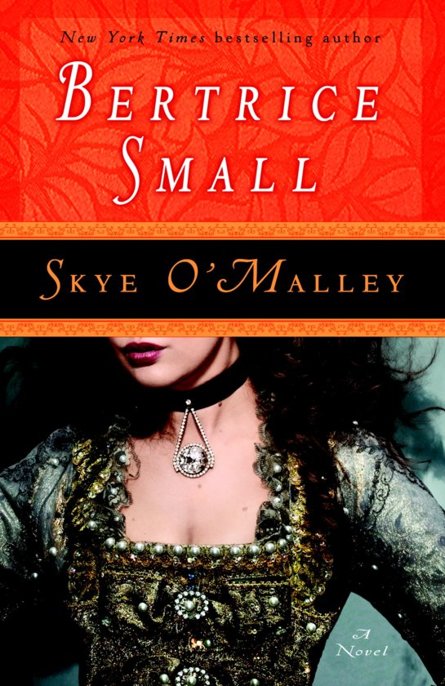 B
Y
B
ERTRICE
S
MALL

A Moment in Time

A Memory of Love

All the Sweet Tomorrows

This Heart of Mine

Skye O’Malley
is a work of fiction. Names, characters, places, and incidents are the products of the author’s imagination or are used fictitiously. Any resemblance to actual events, locales, or persons, living or dead, is entirely coincidental.

Published in the United States by Ballantine Books,

an imprint of The Random House Publishing Group,

BALLANTINE and colophon are registered trademarks of Random House, Inc.

Originally published in trade paperback in the United States by

Ballantine Books, an imprint of The Random House Publishing Group,

To Pamela Strickler and Jan DeVries with love

my people almost as well as I do.

“W
HAT THE HELL DO YOU MEAN SHE CAN HAVE NO MORE CHILDREN?”
demanded Dubhdara O’Malley of his brother. The O’Malley, chief of Clan O’Malley, was a big man: six-foot-four, arms and legs like thick tree limbs, ruddy, sunburnt skin, snapping blue eyes, and a mop of dark hair that was just getting a sprinkling of silver. “You priests are always prating that the purpose of marriage is to procreate. Well, I’ve done what the Church wanted, I’ve gotten children on her, and not one of them a living son! Now you tell me I must
stop?
But I don’t suppose you’ll be granting me an annulment so I can wed with some fresh and healthy blood? Faugh! You make me sick!”

Father Seamus O’Malley, looking almost his brother’s twin though not quite as dark of skin, viewed Dubhdara with genuine sympathy and understanding. He knew how he felt, but there was just no help for it. His sister-in-law couldn’t take another pregnancy. The midwife had been quite certain about that. Another child would take Lady O’Malley’s life. That would be outright murder.

The priest drew a deep breath. “You’ve been married ten years, brother, and in that time Peigi’s been pregnant ten times. She’s miscarried three. This birth nearly killed her.”

The O’Malley whirled, bitterness flooding his rugged face. “Aye,” he said. “She’s miscarried thrice—and all boys too! The only one of my sons she managed to birth lived barely long enough for you to baptize, God assoil his wee soul. And what am I left with? Girls! Six girls! Five of whom are as plain of face as their mother. Faugh! Damn! I thought surely
this
time …”

He paced the room angrily, caring nothing that his harsh words were overheard by the woman who lay, half dead and weeping with bitter disappointment, in the next room. She had prayed so hard for
a son. She had made a novena every month of her confinement. She had fasted and sacrificed, giving to those less fortunate than herself. And what was the result of her piety? Another girl, and the knowledge that she would now never be able to bear her husband a son.

Unknowing and uncaring, Dubhdara O’Malley raged on and on. “Why could she not give me sons, Seamus? Why? I’ve gotten a brace of healthy lads on lasses about the countryside, but my own wife can give me nothing but girls! I wish to God she had died and the female brat with her!”

O’Malley shrugged. “At least I might start anew, but wait and see, Seamus! You wait! She’ll outlive me yet! No! I’ll not stop trying. I must have a legitimate son! I must!”

“You get Peigi with child again, Dubh, and she dies, I’ll have the Church on you! It’d be deliberate murder, for I’ve warned you what will happen if she conceives again. The midwife said she almost bled to death. The wee lass she’s borne is healthy and strong though, thanks be to God.”

O’Malley made a derisive noise.

“What will we baptize her, Dubh?” encouraged the priest.

O’Malley thought a minute. “Call her Skye after the place from which her mother came. Her oldest sister, Moire, can stand her godmother.”

“She needs a godfather too, brother.”

“You be her godfather, Seamus. Six daughters is too many to provide dowries for, so I intend Skye O’Malley for the Church. The Church’ll take a smaller portion, and ’tis fitting that the future nun’s godfather be a priest.”

Seamus O’Malley nodded, satisfied. It was high time his brother singled out a daughter for the Church. But then the priest looked closely at his new niece for the first time, and was quickly certain that this was not the daughter Dubh would send to a convent. His five older nieces were, as their father had said, plain as pikestaffs. With their ordinary brown hair, their pale gray eyes, they were like little sparrows.

This child, however, was a bird of paradise. Her skin was gardenia-fair, her eyes a wonderful blue, like the waters off Kerry, and she already had a thick headful of black curls like her father’s. “No,” said Seamus O’Malley softly to himself, “you are definitely not convent material, Skye O’Malley!”

He smiled down at the babe. If she fulfilled her promise, her beauty could be bartered for a powerful match. The Church would be delighted to accept a less spectacular O’Malley, one whose dowry could be enriched by sister Skye’s good fortune.

On the following day, Skye O’Malley was baptized in the family chapel. Her mother, still weak from childbirth, was not present, but her father and five older sisters were. Moire, aged ten, and the eldest, became Skye’s godmother. Looking on admiringly were Peigi, nine, Bride, seven, Eibhlin, four, and Sine, eighteen months.

When Seamus O’Malley poured the holy water on the child’s head, Skye did not cry out as custom decreed, thus allowing the Devil to depart her. Instead, to everyone’s shock, she made a sound very much like a giggle, and for the first time Dubhdara O’Malley looked at his new daughter with interest.

“So,” he chuckled, his blue eyes narrowing with speculation, “it’s not afraid of water, is it? Well, she’s a true O’Malley at any rate. Maybe I’ll not be giving you to the Church after all, Skye O’Malley. What do you think, brother Seamus?”

The priest smiled back. “I think not, brother. Perhaps one of the others will be better suited, and even has a true vocation. Time will tell, Dubh. Time will tell.”

The O’Malley took his new daughter from his brother and cradled her in the crook of his big arm. With his startlingly bright blue eyes, shoulder-length black hair, and bushy black beard, he very much resembled a pirate. Indeed, his sea-roving activities bordered on piracy. However, his fierce appearance did not frighten his new daughter at all. She gurgled contentedly before closing her eyes and falling asleep.

As the O’Malley left the chapel with his brother, his five older daughters trailing in their wake, he did not relinquish his hold on the infant. The bond between Skye and her father had been formed. And when Peigi O’Malley’s milk refused to come in, he chose the wet nurse himself—a healthy, pretty farmgirl whose bastard had been strangled by its umbilical cord.

Six months later Dubhdara O’Malley departed on a seagoing expedition which would keep him away from Ireland for several months. To his priestly brother’s outrage, he took baby Skye and her wet nurse, Megi, with him. “You’re a disgrace to the family, Dubhdara O’Malley! What the devil will people say about Megi? And if that’s not bad enough, you’re endangering the child! I’ll not have Skye harmed,” roared the doting uncle.

The O’Malley laughed. “Stow your gab, Seamus! I’m not endangering
Skye. She’s already gone sailing with me for a day or so. She likes being on my ship. As to Megi, I would be endangering Skye if I did not take her along. Megi’s milk is better for Skye than a goat’s, which is the only alternative.”

“And I suppose you’ll deny you’ve been fucking with Megi.”

“No, I’ll not deny it. You know I like all the comforts.”

The priest threw up his hands in despair. There was nothing he could do with his brother. Dubh was the most carnal man he knew. Well, one good thing would come of it. At least poor Peigi would be safe from her husband’s lust for the time being.

In the summer of 1541 the O’Malley of Innisfana sailed out of his stronghold on Innisfana Island, into the western seas. It was the first of Skye’s many voyages. She took her first tottering steps on the heaving deck of her father’s ship. Her small baby teeth cut marks into the ship’s wheel. While her wet nurse, Megi, cowered in her bunk, fighting seasickness and praying she wouldn’t drown, Skye O’Malley clapped her fat baby hands and laughed at the storms.

The baby became a toddler, and the toddler a little girl. Dubhdara O’Malley was the lord of the seas around Ireland. He had many ships and several hundred men who answered only to him. Skye soon became his acknowledged heir and a favorite among the rough sailors. She was spoiled and cosseted by them all. She barely knew her mother and sisters, and had no time or patience for them and their silly lives.

In the spring of 1551 Skye’s mother died. Soon, her uncle Seamus urged that Skye stay home and learn some woman’s ways, to sustain her in marriage. As the priest pointed out to his brother, Skye’s husband was more likely to appreciate a wife who could run his home than one who could navigate a ship through the fog. Reluctantly, O’Malley sent Skye home to Innisfana to learn how to be a lady.

Angry at being taken from her beloved sea, Skye set about making her older, married sisters’ lives miserable. She quickly learned, however, that Dubhdara O’Malley’s mind was made up. She must learn womanly arts. So, as her father wished, Skye set about making a good job of it. When her next older sister, Sine, was married a few months later, Skye had become accomplished in the household arts and was scheduled to be wed next.