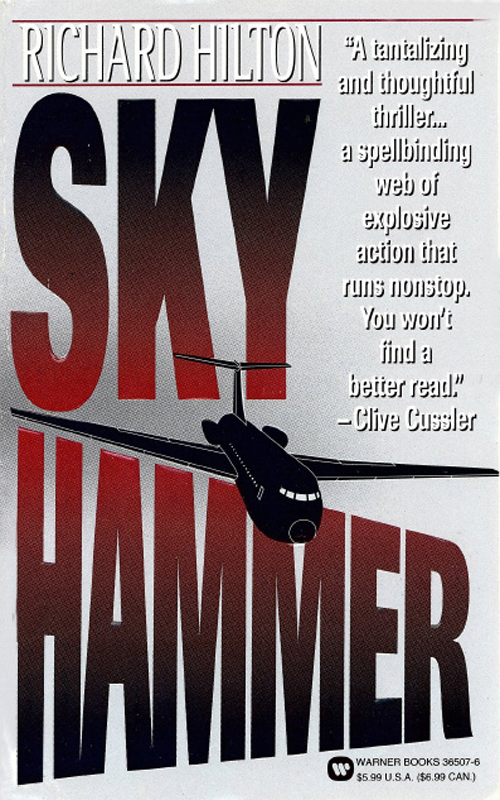 THEY’RE ON A WHITE-KNUCKLE
FLIGHT TO TERROR…

THE WIFE
: Katherine Pate couldn’t save her marriage when Emil withdrew, his career destroyed by a man named Farraday. Can she save
his life now?

THE MAGNATE
: First Jack Farraday busted his pilots’ union. Then he broke his competitors. He’s a ruthless corporate raider ready to do
anything for a profit. Including sacrificing a plane and its passengers.

THE MAN IN THE MIDDLE
: Former West Pointer Brian L’Hommedieu is a brilliant but untested hostage negotiator. He knows how to counter a hijacker’s
demands.How to work on his weaknesses. But how do you talk down a man who makes no demands, shows no fear, and wants to die?

“Pulse-pounding fiction.… with absolute faithfulness to the technical details of airline flying, SKYHAMMER’s plot is relentlessly
driven by the nightmarish worry: Is it possible to push even an airline pilot too far?”

THEY’RE ON A WHITE-KNUCKLE FLIGHT TO TERROR…

For Hilt and Vernay

For their technical assistance, the author wishes
to acknowledge Bob Frank of the Federal Aviation
Authority and]. R. “Ditto”
Ladd, former jet fighter
pilot The author also wants to thank
Mauro DiPreta, Robert Houston, Ken Kuhlken,
and Karen Bellamy
for their editorial support.
And a special thanks to Leslie W. Jones
for his thorough, sensitive edits.

A jetliner was coming in, still high, but the faint, down-pitching whine of the engines made Emil Pate look up. The sun was
behind the plane, and he couldn’t make out the insignia. But the plane was on its approach, and he figured it was the afternoon
New World flight stopping over on its way back from the coast—the route he would have next month. For a moment he pictured
the cockpit, the pilots running through their checklist, everything routine. As if this were any other day.

He tossed his flight bag onto the front seat and turned back toward the house. Katherine had come out onto the step and stood
with her arms folded up tight against the early fall chill.

“Find your sunglasses?” she asked tonelessly as he came back up the walk.

“Got everything else?” She was treating it as a normal goodbye. Pate wondered how long she could pretend. But then again,
his own self-control amazed him.

“Katherine,” he said, looking at her now, wanting for the hundredth time to explain. But he couldn’t.

“You’ll be all right,” she said. “Things are going to work out for you.”

He nodded, looked back at the car, and then at her again. Her eyes were dry.

“Got your keys?” She unfolded her arms and shoved her hands into the pockets of her jacket. They both waited, looking at each
other. Her blond hair was tinged red, and the light made her squint.

Pate looked her over, the way he’d always done before going on a trip. She was the best woman he’d ever known. He managed
to smile. “We had some good times, though, didn’t we, pardner?”

At that, her mouth went small and quivered, but she kept her eyes on him, and he was sure, suddenly, that she was thinking
she wouldn’t see him ever again. Or maybe that was only what he was thinking.

“All right,” he said. “I guess that’s it. Send me the papers to sign.” He picked up his other bag and turned.

“Emil?” She’d stepped down to the sidewalk. “You’re okay, aren’t you?”

He forced a look of surprise.

“You care?” he said, then felt mean for saying it. She blinked at him, wounded. Somehow his anger was always striking
her
. It had to stop; she knew that too. Now her hands came out of the jacket pockets, doubled up into fists.

“It is your fault we’re doing this. You know that.”

Pate grimaced and looked down at his shoes, before turning to look up at the sky. The plane was gone. There was only the thin
white trail of another one, military maybe, far up in the blue New Mexico sky. “If it wasn’t for Jack Farraday—”

“Don’t,” she said. “Not again.” Then, sighing, she said, “It doesn’t make any difference, does it?” She took another step
toward him. “If you could only accept what is.”

He smiled again. “I’d do anything for you, Kate. But not that.”

“Damn you, Emil.” Her face went red. Pate never loved her more than when the freckles across her nose dissolved in an angry
flush. “You goddamn stubborn rock-headed pissant Indian,” she whispered in a rush. “That’s what you are. All that stupid pride.
You just can’t quit, can you?”

“You know me too well,” he answered, weary now of covering his own anger.

She started to answer, but then her fists fell open, and she shook her head. “Yes, I guess I do.”

“We’d better get this goodbye over with then.” He stepped toward her.

“No,” she protested, backing away. “Just go on. And good riddance to you.” Staring at him desperately, as if she were afraid
she would change her mind in another second, she took another step back. Then she turned quickly and went up the steps. The
door swung closed sharply behind her, and she was gone.

Emil Pate stood for another minute, looking at the shabby, crackerbox house, at the paint peeling off the eaves, at the broken
shingles under the windows.It was so different from the place they’d moved out of just a year ago. Their dream home. He dropped
his bag and went up to the door. Shutting his eyes very tight, he leaned his forehead against the wood. He didn’t want to
leave, but it was better that he did.

“Tell the girls goodbye for me?” He listened but heard nothing. So he turned and picked up his bag and went down the walk
to the car. Without looking back to see if she had come out again, he drove off.

Two blocks away, though, rage overtook him, forcing him to stop. He slammed his fist into the ceiling of the car, once, again,
then abruptly buried his face in his hands and moaned. If he quit flying now he’d give up twenty-three years’ seniority. And
then what? fly puddle-jumpers in Alaska? Or worse? No, he’d already paid his dues, and he couldn’t bear to spend the rest
of his life on the ground. Finally it had come down to this, he thought. Flying was all he had left. Or maybe that was all
he’d ever had. Maybe he had only borrowed Katherine Winslow and her daughters for seven years, borrowed a decent life, like
another man’s clothes. Now that it was gone, he felt as if he would lose his mind.

If I Die by Rachel Vincent
Murder Under the Palms by Stefanie Matteson
Stepbrother Claims (His Twisted Game, Book Four) by Chloe Hawk
The Handmaid's Tale by Margaret Atwood
Psychlone by Bear, Greg
Sweetie's Diamonds by Raymond Benson
Saffron by Taige Crenshaw and Aliyah Burke
Captive Bride by Hampton, Sandi
The Archangel Project by C.S. Graham
Burning Down the House by Jane Mendelsohn
Our partner