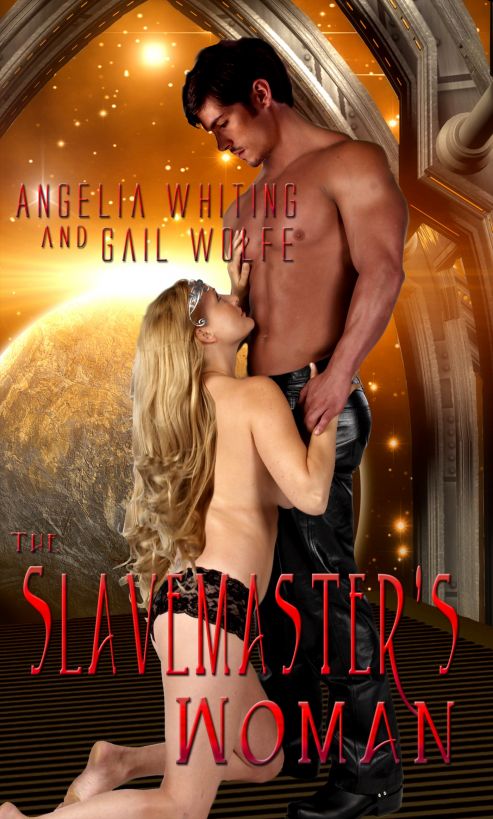 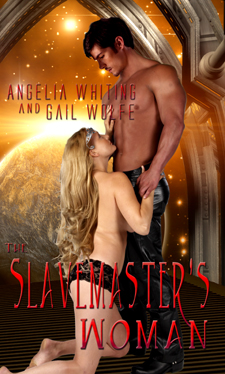 This is a work of fiction. All characters,
events, and places are of the author’s imagination and not to be
confused with fact. Any resemblance to living persons or events is
merely coincidence.

Cushla Zaviot squinted from her hiding place
in the brush, ignoring the bramble that tormented her already
bruised skin.

Black and blue were never her favorite
colors.

Lavidis, the slave trader, her present owner
was selling her and she didn’t want to be owned by the slimy and
lecherous King Mecor, so Cushla ran away.

She touched the metallic slave band clamped
around her forehead. Once Lavidis realized Cushla was gone he would
activate it, transmitting a painful current that would make her
brains feel like they were being squeezed from her skull, until she
passed out from the pain. And he would find her--hunt her down like
an animal, using the tracking device embedded in the band. Though
she knew it was useless, Cushla would, of course, fight. She always
did.

Maybe, but Cushla couldn’t help herself. It
was an ingrained part of her nature to resist what wasn’t right,
even if it resulted in her suffering. At least she had a high
tolerance for pain.
How many times have I jumped in harm’s way
to prevent a slave from being beaten or raped, only to be beaten or
raped myself?
She sighed. It was amazing that she didn’t have
more scars because of her intervening, but the deepest scars she
carried weren’t of the visible kind.

Movement in the woods nearby caused her to
shrink farther into the foliage, ignoring the rocks that dug into
her feet and the bugs crawling on her arms. Sweat rolled down
between her breasts as she caught a glimpse of red and black
tunics, the telltale signs that identified the hunters. Her heart
thumped in her chest. It was Lavidis’ blackguards, looking for her.
She couldn’t let them find her. She had to get away!

Yes.
She heard the sound of water
rushing along and turned to see a river just a short distance away.
Now if she could only get there without being noticed. Crouching
low, she crawled from her forest curtain, intent on reaching the
river, thinking—hoping perhaps the water would camouflage her
whereabouts—interfere with the slave band’s tracking device. If
only she could find a way to rid herself of the thing. It would
make escaping so much easier. But Cushla had been warned. Removing
it would cause a security mechanism to be triggered killing her
instantly.

She didn’t want to die despite her brutally
oppressed situation. Cushla held to the belief that her father
would find and rescue her from this dismal life. She refused to
consider that he might no longer be alive. She needed to believe.
There were many dismal dawnings when hope was her only
companion.

Cushla heard the shouting first and briefly
turned to look over her shoulder. She’d been spotted. Six
blackguards were spreading out, circling the perimeter--closing in.
Her heart rate increased to panic mode, and she quickly rose,
running toward the waterline as fast as her bare, torn feet would
carry her. Her adrenaline pumping, fear and determination drove her
forward. They were gaining on her, clear in the nearness of their
pounding footfalls and the loudness of voices commanding her to
halt.

If not this dawning, sometime soon she would
escape and be free. Cushla would never surrender with ease. Her
father had taught her to be strong, and she would not disappoint
him.
Oh father,
she attempted to tamp down the tears, as
memories of times gone by flashed through her brain
. I know you
never meant for my life to be like this.

In the short, five solars she spent living
with her father on the planet Buranis, she was brought up to be a
lady, taught all the social graces given all the luxuries and
niceties afforded to females of the royal court.

Oh, she could not go back there! How she
hated the king!

A hand skimmed her back, grabbing at the
strap of the shear scarf she wore, a poor excuse for a top. Cushla
screamed.

“Halt!” the blackguard commanded, attempting
to yank her to a stop, causing a tearing sound.

Cushla ripped free from his grasp as her
halter came apart in his hands.

Serves him right! If they’d dressed me
better that wouldn’t have happened. Lucky me,
she thought
bitterly as she came up to the river and plunged into the icy,
rushing waters. She tried to swim but the current took her with it,
shards of ice piercing her flesh. Oh, how it stung! But this pain
was nothing to what she would be forced to endure if Lavidis were
to catch her. Attempting to escape was worth the effort--always
worth the effort, if it meant possibly gaining her freedom.

Cushla’s head bobbed above the water, and
she gazed further downstream. Blackguards were already entering the
river ahead of her, carrying a net to snag her from the drift. She
attempted to turn the other way, but the force of the water flow
was too strong, and there were men in that direction also. She was
surrounded. Against her will, her body floated into the net, and
Cushla fought to untangle herself from it. But the more she
struggled the more entangled she became. She was firmly snared.

“Cease, bitch!” Lavidis bellowed as he
watched his men carry her onto the shore. “The netting is shredding
your flesh!”

With a heavy thud, the blackguards dropped
her so roughly that air was expelled from her lungs when her back
slammed against the ground. She gasped, attempting to force air
into her momentarily paralyzed chest.

Through the corner of her eye, Cushla saw
one of the guard’s yank his dagger from its sheath. She gulped
finally able to breathe again, but having been cut before in a
similar situation she went very still as the wicked blade lowered
toward her. The guard dragged it along the netting, slicing through
her bindings until she was free.

Free. Such a loosely used word. Some
dawning,
she mused.
Some dawning she would truly be
free.
They would never break her spirit. Even with this present
failure, she would never feel defeated!

“Will you ever learn, Cushla?” Lavidis
crouched and reached for her, shackling her wrists with his
hands.

“Be still wench!” He eyed her with disgust
as he examined her. “Now you’re filthy and completely unsuitable
for presentation.” The fingers of one hand he had closed around her
delicate wrists tightened. With his other hand Lavidis cupped her
naked breast, skimming his thumb across the nipple. “I can’t be
delivering damaged goods to his Majesty. He paid such a hefty price
for you, though I can’t imagine why. I’ve warned him that you’ve
been much trouble.”

Cushla stiffened at his touch. Reflexively
turning her head, she promptly bit his arm, sinking her teeth in
far enough to cause pain.

“You stupid whore!” Lavidis growled through
gritted teeth. He attempted to recoil but her jaw was firmly
clamped down. If he activated her slave band, the torturous shock
would cause her teeth to clench even harder. Slaves often bit their
own tongues when the bands were activated, and she knew this—she’d
tricked him with this stunt before.

His other hand swept up, curving around her
jaw, his thumb and index finger applying painful pressure to the
joints between at her mandible and skull.

Cushla attempted to chomp down harder,
resentment and anger slamming through her as he used the technique
that often resulted in having a cock stuck into her mouth. Her
efforts were futile, and Cushla’s jaw was painfully forced
opened.

Lavidis pulled his arm free. He backhanded
her across the cheek and then his hand moved swiftly to the control
button at his belt. He activated her slave band.

Cushla cried out, arching her back from the
ground as she was hit with the agonizing jolt. She prepared for
another but none came. It didn't matter. He’d given her a hefty
dose and as it was she would suffer a head throb and vomiting and
exhaustion translating to the inability to perform sexual acts for
at least two dawnings. Cushla welcomed the impending consequences
if it kept her from the forced sexing. She’d much rather endure
this kind of torture.

“Damn you, Cushla! I’ll not have another
buyer returning you!” Lavidis bellowed. “Five times you've been
sold and then later, brought back for a refund. You're fortunate
none have beaten the spirits out of you. You are lucky to still
have your life.”

“Please Lavidis—My master,” Cushla begged
through heavy pants as she tried to tamp down the residual pain
from the band’s shock. “Not him. Anyone but him.”

“I cannot breach contracts already signed,
Cushla. The credits have already been transferred to my account.”
Lavidis stared at her--his commodity. His brow wrinkled
inquisitively. With a sigh he sat down in the dirt beside her and
pushed the wet, dirty hair from her face.

Cushla knew he saw the rarely expressed fear
in her eyes. “My Sir, please find another,” she pleaded. “I promise
this time—I’ll be good.”

“Why Cushla? Tell me,” Lavidis asked, as he
picked out a twig entangled in her locks.

Would he listen?
Cushla
wondered
.
Even after sixteen solars of being his possession
she still knew little of the man, save the sex he forced her to
endure with him. Perhaps Lavidis would listen.
Perhaps the man
had some compassion?

“The king is a heartless murderer.” Cushla’s
lip quivered, but she bit back the tears threatening to surface. No
one ever saw her cry and she wouldn’t have it now.

“Yes a murderer!” she snarled, ignoring the
throbbing in her head, forcing her anger forward. “I lived on
Buranis as a child.”

“What does this have to do with murder?”

“My mother, he murdered my mother.”

Lavidis shrugged, ignoring her pleading
eyes. “This is none of my concern.”

He stood and stared down at her. If he had a
heart he might care. But he did not. She was goods to him and
nothing more--credits in his pocket, though she was earning him
very little. What a grave error in misjudgment it had been on his
part when he bought her from the man who escorted her all those
solars ago. She was a slip of a girl then, five solars
old…pliable…trainable. Even at Cushla’s young age, her innocent
beauty held the promise that she would blossom into a desirable and
sensual woman. And her virginity alone would earn him a hefty
profit. She could be sold at a premium price.

Hmm.
Now that he thought about it, he
did hear rumor that the man he bought her from was a royal.

Lavidis had paid a ridiculously large sum to
acquire the rare beauty after the drunken man had blown all of his
credits at the gaming tables, and he laughed in the royal’s face
several dawnings later, when he returned to beg for Cushla's
return. Lavidis had him tossed out on his ass and that was the last
he saw of him.

“Take her to be cleaned and fed,” Lavidis
ordered his blackguards. “And let her sleep off her punishment. The
new slavemaster will be here in a few dawnings and she must be
presentable.”

Judging by her cuts and bruises, he doubted
Cushla’s appearance would be near acceptable enough to meet the
satisfaction of the king’s slavemaster. The king was used to
perfection, and although Cushla was typically an extraordinary
beauty, at the moment, she was a complete mess. The slavemaster
would likely reject her on the spot and demand his credits
back.