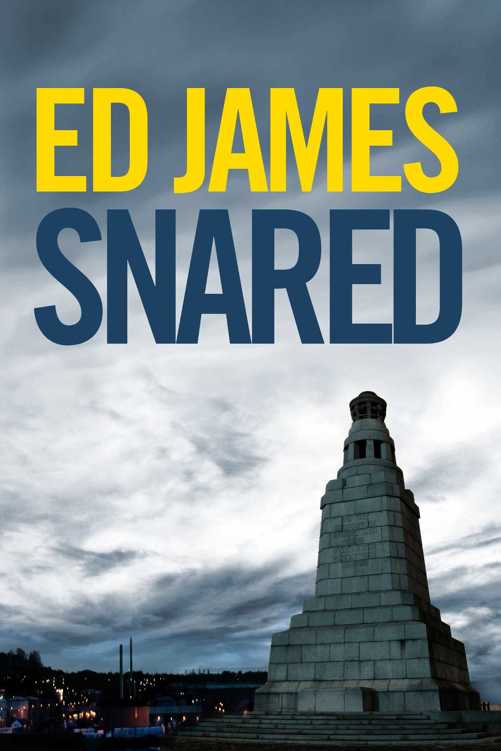 OTHER TITLES BY ED JAMES

Ghost in the Machine

Devil in the Detail

Fire in the Blood

Dyed in the Wool

Shot Through the Heart

Chapter One Hundred and One

Chapter One Hundred and Two

Chapter One Hundred and Three

Chapter One Hundred and Four

Chapter One Hundred and Five

Chapter One Hundred and Six

Chapter One Hundred and Seven

Chapter One Hundred and Eight

Chapter One Hundred and Nine

Chapter One Hundred and Ten

Chapter One Hundred and Eleven

Chapter One Hundred and Twelve

Chapter One Hundred and Thirteen

Chapter One Hundred and Fourteen

Chapter One Hundred and Fifteen

Chapter One Hundred and Sixteen

Chapter One Hundred and Seventeen

Chapter One Hundred and Eighteen

Chapter One Hundred and Nineteen

Chapter One Hundred and Twenty

Chapter One Hundred and Twenty-One

Chapter One Hundred and Twenty-Two

Chapter One Hundred and Twenty-Three

Chapter One Hundred and Twenty-Four

Chapter One Hundred and Twenty-Five

Chapter One Hundred and Twenty-Six

Chapter One Hundred and Twenty-Seven

Chapter One Hundred and Twenty-Eight

T
here he goes. He’s just about ready.” The man tugged his balaclava tighter before patting his companion on her shoulder. “You’ll see why they call it doggy style.”

The woman shrugged his arm off, twisting her body away from the cage, staring into the black of the rest of the large room. A tap dripped somewhere in the distance. “Right.”

The man walked up to the cage and rattled it, the clank still echoing round the room once he stopped. “Go on, boy, get it up her.”

The male in the cage moved away from the female, head bowed, avoiding eye contact with either of them, eyes locked on the dirty floor instead, on the mounds of their own excrement.

The man pointed at the cage, eyes on her. “What’s he doing?”

The woman glanced back at the cage, then shook her head. “This is a bit too cruel.”

“They’re animals. There’s nothing cruel about this.” The man rattled the cage again, gloved hands gripping the steel.

He pointed the Taser at the cage before sparking it. “Don’t make me use this again.”

The male focused on the weapon. It knew. It looked back at the female before groaning as it settled on its haunches near the edge of the cage between the female and them, protecting her. Its chest heaved as its breathing increased.

“Christ’s sake. We’ll never get these two to breed at this rate.” He sparked the Taser again and jammed it through the bars, catching the male between the shoulder blades.

It jerked up then sprawled over the floor of the cage, its whole body shaking.

The female crawled into the far corner, pushing up against the bars, tucking herself into a foetal position.

The male’s brown eyes pleaded with them as it lay prone in a pool of its own urine.

The man held out the Taser again, not quite reaching the male. “Want to be a good boy for me?”

The male growled at them, some motor control returning.

The man let out a sigh and looked around. He tapped her on the shoulder. “Do you want to help me here?”

The woman turned to look at the cage, at the pathetic animals inside, staring at them for a few seconds. “You using that thing isn’t going to help, you know.”

He inspected the Taser before nodding. “You’re probably right.”

“Come on, let’s leave them to it. That might encourage them more than your battering-ram approach.”

“You could be right.”

The male sat up and started clawing at the bars at the front.

The man put his face up to the bars, eyeballing the male, before pointing the Taser at the cage, inches from its face, and sparking it again. “Don’t worry, you’ll be here for a while, Paul.”

V
icky Dodds pulled off the roundabout onto the North
Marketgait
, the dual carriageway giving her a clear run for once. The trees lining the road obscured a block of new flats in brown and blue climbing over the car park to the right, already half full.

Her phone started ringing as she shot through the green lights, past the pink brick of the Wellgate Shopping Centre, the towering multi-storey flats ahead of her surrounding a turreted building in the brown stone of old Dundee. She slipped into the half darkness of the tunnel just as her mobile stopped ringing.

“Shit, shit, shit.” She hit the brakes. The road ahead was jammed solid, what passed for morning rush hour traffic in Dundee. Fumes leaked into the car. She flipped the air conditioning to recycle mode and picked up the phone from its cradle.

David Forrester. No voicemail. The clock on the dashboard showed 8.22. She wasn’t late, yet. What did he want?

The cars ahead started trundling forward, their brake lights more on than off. She set off and dialled Forrester, phone on speakerphone, ringing and ringing.

She pulled left, more traffic queuing outside the long row of ancient jute mills, now all redundant and repurposed, opposite the brown and mustard ridges of the three-storey police station.

“. . . please leave a message after the tone.” The phone beeped.

Vicky held up the phone. “Sir, it’s DS Dodds just returning your call. I’ll be in soon.” Eyes on the road, she fumbled for the red button before tossing the phone onto the passenger seat.

Setting off again, she passed the police station before hanging a left onto West Bell Street, the grand Sheriff Court with its flat doric columns almost outmuscled by the surrounding concrete buildings. She took another left, navigating the twisting back road into the car park at the front.

A blue BMW 1-Series sat in her parking bay, gleaming in the sunshine.

“Not again . . .” She parked in the nearest free space, teeth clamped together. She grabbed her bag and phone as she got out, zapping the lock on her black Fiesta as she stomped across the small car park. She entered the double doors, the Tayside Police lettering above still outlined by the weathering.

The desk sergeant glanced up at her approach, his thick beard patchy in places but covering most of his pink face.

“I prefer Sergeant Davies but you know that, don’t you?” He ran a hand over his bald head, shaved to the pockmarked skin. “But what a beautiful morning it is.”

“Don’t try to sweeten me up.” Vicky held his gaze as she rummaged in her handbag. “Someone’s taken my space again.”

Tommy looked away, fingers combing his beard. “Aye, sorry about that. New lad started in your area. DI Forrester said it was okay today.”

“Check with me first, Tommy, all right?”

“He said he’d called you. Didn’t think you’d mind, what with you being so even-tempered and everything.”

Vicky tugged her ID badge over her head before zipping her bag and slipping it over her shoulder. “I’ll let it pass today, but tomorrow will be a different matter.”

“Cheers, Tommy.” Vicky stepped over to the door, using her security card to gain access to the guts of the station. She hurried down the corridor, already bustling with uniformed officers, before slowing to a halt halfway.

Forrester was heading straight for her, his long arms and legs eating up the distance. He stopped in front of her, arms crossed and fingers drumming on his white shirt. He ran a hand through his hair, the colour almost all gone. “Morning, Vicky.”

“Morning, sir.” Vicky moved aside to let the foot traffic past. “Tommy Davies let someone park in my space again.”

Forrester leaned against the wall and nodded. “Aye, sorry about that. I did try calling. I’ve got that new DS starting this morning. Got to take him through his induction. Pain in the arse how he’s starting on a Thursday, but there you go. Bloody holidays and moving up from Glasgow.”

“Means we won’t be having the briefing this morning. Got a couple of disappearances passed over from Local Policing. There’s one out in Forfar as well but that looks like a waste of time. I need you to look at the one in Invergowrie, though — looks
suspicious
.”

“Some Major Investigation Team we are. A disappearance isn’t exactly a major incident.”

Forrester laughed as he handed her an incident report. “Can’t have murders every day. We can only do what’s put in front of us.”

“Right, fine.” Vicky got out her notebook, folding the sheet and tucking it in. “So, who do I get? Tell me it’s Karen Woods.”

Forrester tilted his head to the side. “Well, actually, I was thinking young DC Considine needs a bit of coaching.”

Vicky bit the inside of her cheek. “I’ll eat him alive, sir.”

“That’s what I’m counting on.” Forrester grinned, a row of perfect white teeth interrupted by a sliver of gold at the edge of a molar. “Cocky wee bugger needs brought down a peg or two. Thinks he’s God’s gift to policing after arresting that taxi driver last month.”

Forrester put a hand to her shoulder. “It’s what being a sergeant’s all about. You’re my only leader on the pitch, Vicky, at least until I work out if this new boy’s up to scratch.”

Robot Blues by Margaret Weis, Don Perrin
Tickled Pink by Schultz, JT
The Secret of the Stones by Ernest Dempsey
The Last Of The Wilds by Canavan, Trudi
Marked Down for Murder (Good Buy Girls) by Josie Belle
Claws for a Cause (A Klepto Cat Mystery Book 15) by Patricia Fry
Finding Libbie by Deanna Lynn Sletten
The Cat Who Robbed a Bank by Lilian Jackson Braun
Chain Lightning by Elizabeth Lowell
Scarlet Dusk by Megan J. Parker
Our partner