Snowed Over (A Christmas Novella) 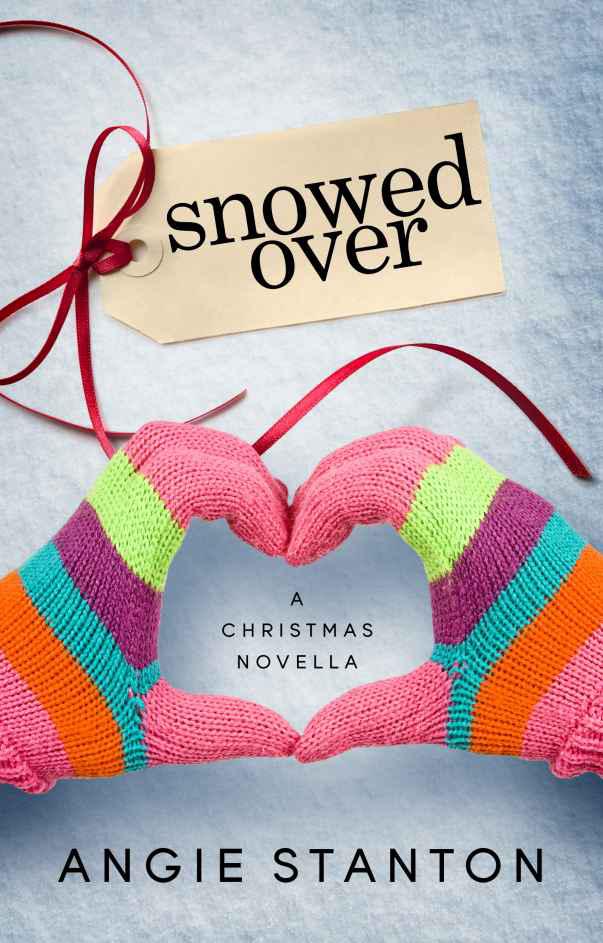 This ebook is licensed for your personal enjoyment only. This ebook may not be re-sold or given away to other people. Thank you for respecting the hard work of this author.

Other books by Angie Stanton

Rock and a Hard Place

A Young Adult romance ~ an amazing, emotional ride with a rock star and a regular girl!

A Young Adult romance filled with humor, heart and heat!

Snapshot, a moment in time that changes two people forever.

If you like reality dating shows, you’ll love this!

Thanks for your constant love and support.

You still make me laugh.

Each gust of wind shot tiny shards of sleet at Katie Brandt’s already frozen face. She hadn’t laid eyes on her ride, Alex Walker, yet, but already she didn’t like him. He said two o’clock, and it was twenty minutes after.

If there was one thing she hated, it was not keeping your word. If you say something, for crying out loud, mean it. Especially if it means you’re leaving someone outside to freeze to death.

Katie gripped her cold coffee and braced against the biting wind as she waited outside the Memorial Union for her long ride north with a complete stranger. Nothing about this holiday felt familiar or right.

Ever since her parents’ sudden split last June, her mom had started acting different. She decided to drag Katie and her little sister up to some guy named Tom’s cabin for the Christmas holiday
.
Katie shivered.

So Katie was forced to wait in this deep freeze to catch a ride with a fellow university student she hadn’t actually met. Apparently Alex’s hometown,
Middle of Freakin’ Nowhere
, Wisconsin, wasn’t far from Tom’s place.

Her mother referred to Tom as
just a friend
, but Katie wasn’t stupid. Forty-something, newly divorced women didn’t suddenly force their unwilling kids away from every holiday tradition they’d ever known to hang with a
friend.

Katie’s teeth chattered as she turned her back against another sub-zero gust. Her long hair tangled in the wind. She pulled her cell phone from the pocket of her down coat, checking again for a text or message from the extremely tardy Alex.

Nothing
. Her roommate’s brother shared a house with Alex and a few other guys. Lindsey said Alex was super smart, totally hot and engaged to a girl back home.
Whatever
. He was late.

As Katie shivered and watched for his blue truck, she thought about how perfect life had been until two weeks after graduation when her Dad abruptly moved across town, and Mom started dressing too young for her age and going out all the time.

Katie’s phone rang.
About damn time
. Her numb fingers fumbled with the phone. She checked the Caller ID and sighed. “Hi, Mom.”

“Hi, honey. Are you on your way yet? Tom says that if you don’t leave soon, you’re going to run into snow. It was supposed to go north of us, but now it’s changing direction.”

Katie rolled her eyes. “I’m waiting for my ride.”

“Tell me again who you’re riding with? And how do you know him? I’m really not comfortable with you accepting a ride from a total stranger.”

“I told you. His name is Alex, and my roommate knows his family.”
A total lie
. “This is how college students get around, Mom. If you weren’t forcing me to go to the other side of the state, I wouldn’t be riding with a total stranger.” Katie felt a little regret for her snarky comments, but this was totally her mother’s fault. Katie deserved to act like a sullen teenager.

Her mom ignored her tone. “I wish you could have come up with Tom, your sister, and me on Thursday. The university shouldn’t schedule their exams this close to Christmas.”

Katie would much rather ride with an unknown college student than Tom, who she’d nicknamed,
Not the Boyfriend
.

“What’s his cell phone number? I should at least have that,” her mother asked.

“No! Not happening. You’ll just call to give him weather updates every ten minutes.”

“Okay, maybe I am, but it’s only because I love you and want you safe.”

Katie huffed. If her mom loved her so much, she’d tell her what the hell happened to their family in the last six months. Instead, her mother kept pretending life was normal when it was anything but.

“Mom, my fingers are freezing off. I’ll see you in five or six hours.”

“All right, but make sure he drives careful. If it starts to snow, I want him to pull over, and if there’s car trouble, call me, and I’ll give you my auto club number. Do you have money to stop for something to eat?”

“I’ve got it under control. I’m hanging up. Goodbye.” Katie snapped off the call. How would she endure four days with her mom? They used to get along, but ever since her parents separated, she could barely stand being around her. Being away at college had been her savior.

Only a few students were left on campus this close to Christmas, and most of them had the smarts to stay inside. Katie gazed longingly at the doors of the Union and thought about going in to warm up, but she didn’t want to miss Alex. With her toes freezing off, she wished she’d worn the boots buried deep in her duffle bag, instead of her athletic shoes. She dumped her nearly frozen coffee into the trash bin.

The blast of a horn caught her attention. She turned. An old, blue pickup truck idled at the curb. The guy inside waved.
Finally
. She adjusted her overstuffed backpack on her shoulder and hoisted her duffle bag off the frozen sidewalk while trying not to lose her purse and shopping bag full of Christmas gifts.

She managed to pull open the passenger door.

“Hi, you Katie?” His tousled brown hair stuck up on top as if he just ran his hands through it. His expressive, dark eyes danced upon her. Lindsey had said this guy was a looker, and she hadn’t exaggerated.

“Yup, you Alex?” Good looking or not, Katie forced herself not to yell at him for causing her to nearly freeze to death.

He nodded with a matter of fact friendliness, but short of an actual smile. He hopped out of the truck wearing only a grey University of Wisconsin hoodie over his broad shoulders. He seemed immune to the elements as he came around and tossed her heavy laundry-filled duffle into the back of the truck. She noticed a snow shovel, some large covered buckets and a huge canvas bag in the truck bed. Alex stood tall and lean, maybe six foot in his boots. He reached for her backpack, but she pulled it away.

“Thanks, but I’ll keep it with me. My laptop’s in there.”

“Okay.” He reached for the shopping bag.

“I’ll keep these up front, too. They’re presents.” She could picture the neatly wrapped gifts sliding around the back of his dirty truck.

He raised an eyebrow. “Suit yourself.” He walked around and hopped back in while Katie maneuvered her remaining bags into the truck cab. It was a tight fit with his coat and gloves on the seat and his backpack and a couple of other bags crowding the floor. She squeezed her bags to the floor at her feet and eyed his hot coffee.
Must be nice
.

She wiped her icy mitten across her runny nose.

“Geez, it’s cold out there.” Katie buckled up, thankful to finally be in the warm cab and out of the deep freeze. She slipped off her mittens and hat, turned the heat vents toward her, and rubbed her hands in front of the warm air.
Wasn’t he at least going to apologize for being so late?

“Here, let me turn it up.” Alex adjusted the fan to blow at full speed. The temperature was already on the warmest setting. His eyes met hers, and he offered a friendly smile.

“Thanks.” She sighed as the hot air thawed her fingers.

Katie wasn’t prepared for his soulful eyes framed by dark eyebrows, and he had the most perfectly shaped mouth. How was she supposed to spend five hours with this guy? Next to him she looked like a total loser with her drippy nose and watering eyes. She sat back and focused on the road ahead. He was engaged, off limits. Plus, his late arrival was one big checkmark against him.

“So, you’re a friend of Matt’s little sister?” He put the truck into gear and pulled away from the curb.

“Yeah, Lindsey. We’re roommates. Thanks for giving me a ride. It saved me from two very long bus rides that would have stopped in every rural town and taken all day.”

“No problem. Crystal River is only twelve miles from my parents.”

She reached in her coat pocket for a tissue and blew her nose. She imagined her nose had turned bright red. It always did when she was cold. She didn’t know what to say to this guy, and they’d be spending a lot of hours together. She dabbed at her nose and stuffed the tissue away. “So what’s your major?”

“Yeah, what’s wrong with that?”

“Nothing.” He smiled, and it lit up his entire face. His eyes twinkled and a small dimple appeared on the side of his cheek. She felt like a troll next to him.

“You just don’t seem like a numbers kind of girl.”

She frowned. “Well, I am.” What did she look like to him?

“I didn’t mean to make you feel bad. You look like more of a creative type.” He gestured toward the brightly wrapped gifts sticking out of her bag and the paisley design on her backpack.

“I’m creative too. I just like when things make sense. When there is a right or wrong. Everything always adds up, and when it doesn’t, you fix it.”

He checked his side mirror and merged onto the highway. “Sounds like you’re on the right track.”

“Thank you.” She sniffed.

The Devil's Liege (The Mathias Saga Book 2) by Danielle DeVor
The Upside of Love by Sandi Lynn
Quintic by V. P. Trick
Sinthetica by Scott Medbury
Bread Upon the Waters by Irwin Shaw
Motown Breakdown (Motown Down #4) by K.S. Adkins
The Secret of Sigma Seven by Franklin W. Dixon
Darkness Bound by J. T. Geissinger
Forest World by Felix Salten
Passion to Protect by Colleen Thompson
Our partner