Read So Good: A Ribbon Ridge Novel (Love on the Vine Book 1) Online

So Good: A Ribbon Ridge Novel (Love on the Vine Book 1) 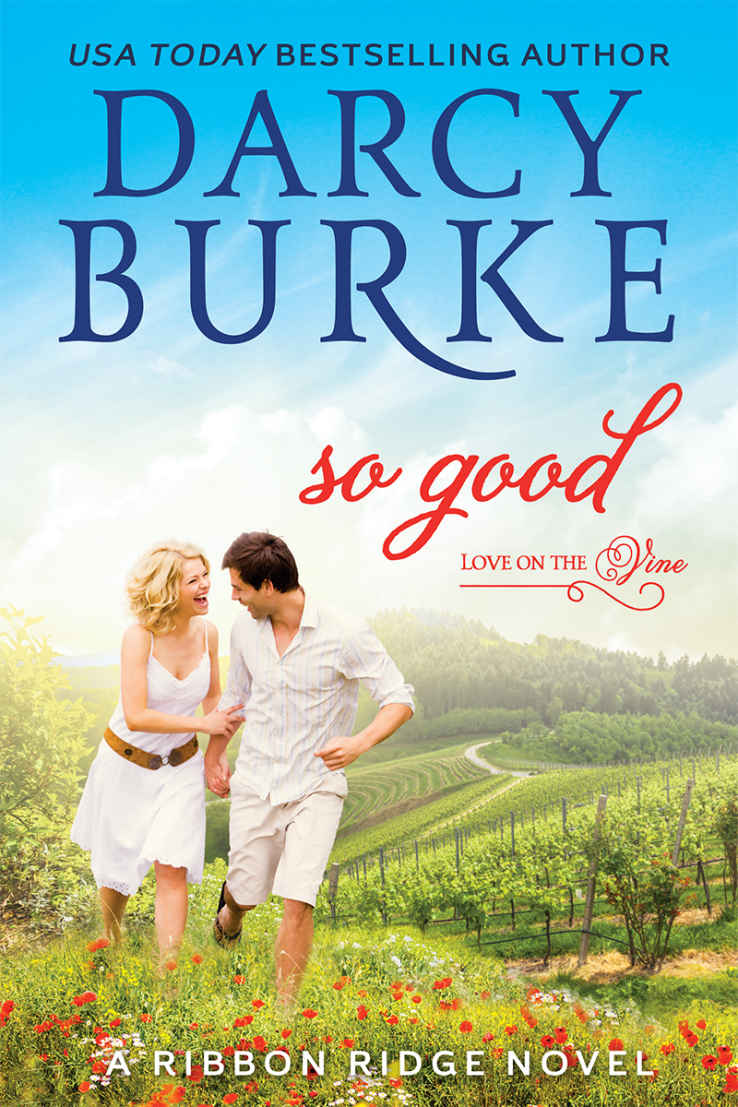 For my parents-in-law, Linda and Roger, as they celebrate 50 years of marriage.

Your happy ever after is inspiring and amazing—

C
ameron Westcott frowned at the serpentine line stretching before them. To their left, a forty-foot-long bed of hot coals roasted salmon that was speared on long, arched pikes. The heat wafted over the crowd of people waiting to go in to the dinner, making the already hot summer night even warmer.

But Cam didn’t care about the temperature. He wanted a good seat. The annual salmon bake at the International Pinot Noir Celebration was a fun, casual event where the wine flowed freely, and the attendees came from all walks—wine connoisseurs, winemakers, wine critics, and, most importantly, wine lovers and buyers. It was the perfect place for Cam and his partners:

his best friend and two of his brothers, to offer a sneak peek of their pinot noir.

Cam craned his neck to try to gauge how far back they were from the entrance. “We should’ve gotten here earlier.”

Cam’s younger-by-two-years brother Luke, nearly always the coolest head in the room, clapped his shoulder and gave it a quick, hard massage. “Relax. Hayden will save us a spot.”

Hayden Archer had been Cam’s best friend since first grade. He was also the winemaker at their winery, West Arch Estate. Cam was the business and sales manager, Luke managed the vineyard, and their youngest brother, Jamie—who stood just behind them looking at his phone—was the chief financial officer.

“Yeah, you’re right.” Cam forced himself to do exactly what Luke said—relax. He’d been working crazy hours the past few weeks as they geared up for their first fall season as an official winery. They’d purchased the vineyard two years ago, but this was the first year they would have everything in place: a facility with a tasting room and their inaugural vintage, albeit small, of pinot noir.

The line suddenly started to move more quickly. The closer they got to the entry, the more they could see the dozens of round tables with their battery-operated candles and two bottles of wine each and the long rectangular tables that held the amazing buffet and carving stations. It was always a beautiful setting, a fairylike dinner in an oak grove at the local college.

Their wine wouldn’t be poured by the roving servers nor would it be set out on the tables, but Hayden had a cooler with their whites and a rolling tote with their fledgling pinot. Like many other winemakers, he’d whip the bottles out and share them with everyone at their table and anyone else who wandered by.

Cam’s phone vibrated in his pocket. He pulled it from his khaki shorts and looked at the screen.

Cam glanced at the tables that were rapidly filling. By the time they got inside, they’d be scrambling for a good spot. He typed a response into his phone.

Hayden: Liam just nabbed two seats for me and Bex, but the rest of the table’s full. Sorry, bro.

Liam was Hayden’s older brother and a master at networking.

Irritation curled along Cam’s spine, but he inhaled deeply, getting a nose full of campfire scent for his efforts. This was no big deal. So they weren’t sitting together. It would still be an amazing evening. Besides, once people started milling about, they’d all end up in the same place.

He turned to his brothers. “Hayden’s running late, but he’s got two seats saved thanks to Liam. We’re on our own.”

“Damn lucky Archers.” Luke said this without heat, his dark eyes crinkling at the edges.

The Archers were the first family of Ribbon Ridge—literally, since their ancestor had settled the town—and most things they touched turned to gold. Cam wasn’t jealous, though, and neither were his brothers. Especially when they were in business with one of them, and their older half-brother was married to another.

Jamie sidled closer. He looked between Cam and Luke. “So what’s our plan? Split up and find something?”

“Just go for whatever’s closest to the center,” Cam said. “Ideally we’ll find a table close to Hayden, but that may not be possible.”

“And I’ll just look for anything center-ish,” Jamie said.

At last, they reached the entry and rushed inside. Luke took off in one direction, while Jamie went in another. Cam scanned for empty seats and saw a few at a table near the edge but still relatively close to the center of things.

Just as Cam reached the table, a trio of women did the same. He set his hand on the back of a chair at the same moment one of them did.

The woman was probably a few years shy of thirty—a bit younger than him—and drop-dead gorgeous with shoulder-length, golden blonde hair and sharp blue-green eyes. If Cam wasn’t so eager to claim the seats, he’d hit on her.

Hell, he’d probably hit on her anyway. After he took possession of the chairs.

She smiled at him, and she was even prettier. Yes, definitely hitting on her.

“We’re taking these three,” she said, glancing at the other two women—a petite brunette and a lean, athletic beauty with long, dark hair.

“I think I was here first,” Cam said, flashing his most disarming smile.

Her eyes darkened a shade, but then she batted her lashes. Her gaze raked him from head to toe, firing his blood. “I don’t think so, but anyway, a real gentleman would surrender.”

He leaned toward her. She smelled of vanilla and bergamot—he’d gotten pretty good at detecting fragrance over the past eight years shilling wine. “A lady wouldn’t resort to flirtation to steal seats.”

“It’s not stealing if I was here first.” She arched a slender, sculpted blonde brow. “Which I was.”

He met her brow arch with one of his own. “In your opinion.”

Luke walked toward them. “You find something?”

Cam kept his hand on the chair. “I did.”

The blonde glanced at Luke. “That is up for dispute.”

Luke dipped his gaze toward his phone. “Jamie found us seats. Come on.”

Cam didn’t want to give in so easily. And not just because he wanted this table. He wished there were enough seats for all of them. That way he could get to know this stunning woman.

She looked past him at Luke, and her smile became more radiant, if that were possible. “Thank you.”

Cam reluctantly let go of the chairback. He took a small step toward her and lowered his voice. “You win this round.”

She brushed the lush waves of her hair over her shoulder. “Oh, you think there’ll be another?”

He dipped his gaze over her. She wore a coral-colored sleeveless top with a pair of long gold necklaces and white, cropped pants with strappy wedges. She had great style—precisely the type of woman that caught his eye. “Definitely,” he said.

She set her small clutch purse on the table and flashed him a saucy look. “Hold my chair for me?”

Damn, she was a flirt. He couldn’t stop a grin from stealing across his lips. He might be sitting in the nether regions of the grove, but he had the sense it was going to be a great night.

He held her chair out while she sat, then scooted her in. He dropped down and whispered close to her ear, “I’ll be back later.”

She looked at him over her shoulder. “I don’t see a need for that.”

What? Hadn’t she just given him all sorts of signs that she was interested? He opened his mouth to ask why, but his phone vibrated. He quickly read the screen. Both his brothers were asking where the hell he was. They were having trouble defending his seat.

Resigned that he had to go, Cam settled for a parting shot. “I see plenty of need,” he said. “And I’ll show you later.”

As he pivoted to walk away, he nearly tripped. Had she just rolled her eyes? He looked back at her, but she’d turned toward the table so he couldn’t see her face anymore. His phone buzzed again.

Luke: STOP FLIRTING AND GET YOUR ASS OVER HERE.

Cam walked out to what felt like Siberia, to a table in the darkest corner of the grove. He surveyed the sad gathering—all guys. “Wow, great seats.”

Jamie reached for one of the open bottles of wine on the table and poured pinot blanc into their smaller white-wine glasses. “At least we’re together. It’s not like we’ll be here all night. We’ll move around after dinner.”

Luke set his phone next to his place setting. “You’ll have ample opportunity to get back to the hot blonde.”

Cam sat down between his brothers. “Maybe.”

Luke threw him an incredulous look. “Maybe? Where’s my brother the player? She was totally flirting with you.”

“Yeah, I thought so too, but then she gave me the brush-off.”

Jamie shrugged. “Maybe she was just flirting to get the seats. You were arguing over them, right?”

Now it was Cam’s turn to roll his eyes. He was used to his younger brothers giving him crap about his love life, which wasn’t really an accurate description since love never came anywhere near the vicinity of it. “Whatever. Plenty of dateable women here tonight.” Just not at their table.

Luke laughed. “Dateable? You’re going to actually date someone for the first time in, what, seven, eight years?”

Even though Jamie hadn’t said her name, which Cam didn’t allow since she was his own personal Voldemort, the mere mention of her set Cam’s teeth on edge. “I date.”

Jamie looked unconvinced. “I guess, but is it really dating when you have no intention of seeing someone more than a handful of times?”

That wasn’t fair. Cam had seen plenty of women more than a handful of times. During the six years he’d worked for Blackthorn Cellars traveling around the country, he’d seen a couple of women regularly. Granted, neither of them had lived in Ribbon Ridge and the long-distance, casual nature of those relationships had suited all parties. “I’ve dated plenty of women.” Just not exclusively, and he’d always been up-front about it.

“Hear that, Luke? Plenty of women.” Jamie waggled his brows before dissolving into laughter.

Cam drummed his fingers on the table. “You can tease me all you want, but how many women have I been with since we started the winery?” He’d thrown himself into this endeavor, and yeah, since he wasn’t traveling anymore, his options had narrowed. But he also didn’t miss that lifestyle.

Luke stroked his hand along his perpetually stubbled chin. “Good point. Guess we should stop calling you a player and a manwhore and the like. How about we start calling you asshat instead?”

Cam grinned. “That’s the best you can do?”

Jamie angled himself toward Cam and Luke and set his elbow on the table. “Speaking of the winery, I hope this pinot we’re launching is ready.”

Real Life & Liars by Kristina Riggle
Ancient Shores by Jack McDevitt
Not Until You: Part III by Roni Loren
A Fallow Heart by Kage, Linda
Swim to Me by Betsy Carter
His Tempest by Candice Poarch
Murder at the Rocks by Jill Paterson
Heart Of Gold by Bird, Jessica
Slavers of the Savage Catacombs by Jon F Merz
On the Island by Tracey Garvis Graves
Our partner