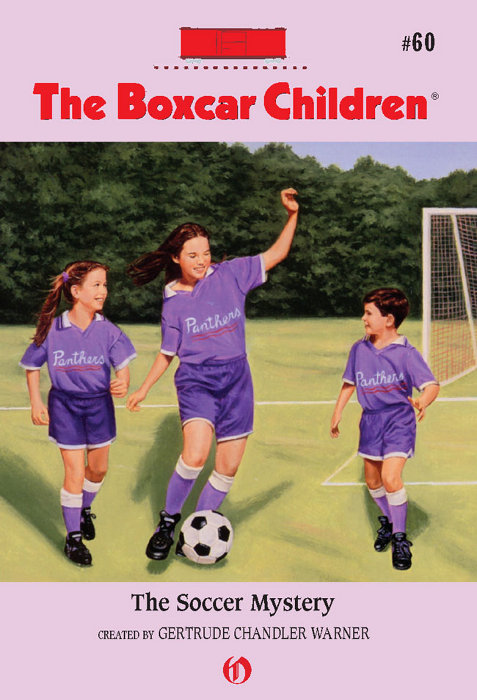 2 Which Team Is the Best?

“O
h, Benny, what are you doing to Watch?” Violet Alden asked her six-year-old brother.

Benny Alden grinned. He had tied a bandanna around Watch’s head with a leaf tucked under one side to make an eye patch. “I’m a pirate,” he said. “And I am making Watch walk the plank.”

Benny had put a board across the stump that the Aldens used as a step up into the old boxcar in their backyard. He was standing on top of the board. Watch, who was a small black-and-white dog, was standing at one end of the board.

“Okay, Watch, jump off the plank into the ocean!” Benny commanded.

Watch looked over his shoulder at Benny. Then he sat down on the end of the board and yawned.

“I know,” said Benny. “I’m not a very good pirate yet. I need more practice.” Benny had been very interested in pirates ever since he and his sisters, Violet and twelve-year-old Jessie, and his fourteen-year-old brother, Henry, had visited Charleston, South Carolina. They had gone to help a friend of their grandfather’s rebuild her house after a hurricane. But they had ended up finding a pirate’s treasure.

Benny jumped off the stump. Without his weight on it, the board tipped forward.

“Woof!” said Watch, and jumped onto the grass as the board fell off the stump.

Benny and Violet both laughed now. Watch ran in circles around Benny, wagging his tail and looking pleased with himself.

“Come on, said Violet. “You’ll have to practice being a pirate later. Soo Lee is here.”

Soo Lee was the Aldens’ cousin. She was the daughter of Aunt Alice and Uncle Joe. They lived in Greenfield, too.

Violet, Benny, and Watch went across the backyard toward the kitchen door of the big old white house where they lived.

The red boxcar was the Aldens’ old home. The white house was their new one.

After their parents died, the Aldens had run away. They had heard that their grandfather was a mean person. They’d made a home in the abandoned boxcar in the woods, where they had found Watch and adopted him.

Then Grandfather Alden had found them, and he hadn’t been mean at all. So the four Aldens and Watch had come to live with their grandfather in his house in Greenfield. And he had even moved the boxcar to the backyard so that they could visit it whenever they wanted.

“Maybe Soo Lee would like to play pirate”, said Benny.

“No,” said Violet. “Soo Lee is here so we can practice soccer. She brought her soccer ball. We signed up for the Greenfield Summer Soccer League, remember?”

“The tryouts are this weekend,” said Violet. “We want to be ready.”

She opened the back door, and they walked into the kitchen. Mrs. McGregor, the housekeeper, was stirring something in a big bowl.

“Is that a cake for dinner?” asked Benny hopefully.

“It might be,” said Mrs. McGregor with a twinkle in her eye. “You’ll find out later.”

“We’re going to practice soccer with Soo Lee,” said Violet. “At the park. May we get anything for you while we are out?”

“Maybe ice cream to go with the cake?” added Benny.

Mrs. McGregor shook her head. “Thank you, but I don’t need anything. Not even ice cream. Don’t be late for dinner, now.”

Soo Lee, Henry, and Jessie were in the front yard. They were kicking a soccer ball back and forth. When Soo Lee saw Benny and Violet, she put her foot on top of the ball and stopped it.

“Come on,” she said. “Let’s hurry and practice.” She gave the ball to Jessie, who put it into her pack.

“Two balls!” said Violet. “But you only use one ball to play soccer, don’t you?” Like Benny, Violet had never played soccer before.

“Don’t worry. We’ll just use two balls for practice,” said Henry. He, Jessie, and Soo Lee had all played soccer before. Soo Lee was a very good soccer player. She had played in Korea, where she was born. Like her cousins, Soo Lee was an orphan. Aunt Alice and Uncle Joe had adopted her. 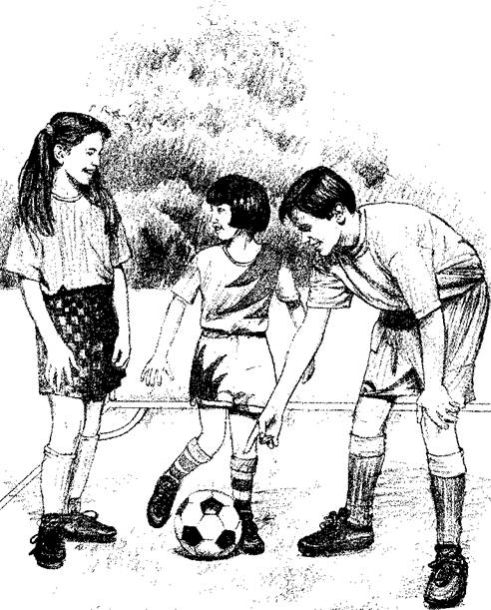 Soo Lee, Jessie, and Henry showed Benny and Violet how to kick. Then they showed them how to run and kick the ball to someone else to make a pass.

“You can use every part of your body to move the ball, Soo Lee explained. “Except your arms and hands. Only goalies can use their arms and hands to catch the ball and keep it from going in the goal.”

Soo Lee, Henry, and Jessie showed Benny and Violet how to kick the ball and keep it just in front of their feet on the ground as they ran forward. “When you move the ball forward like that,” Soo Lee explained, “it is called dribbling.”

Then Soo Lee and Jessie put their backpacks next to each other a few feet apart. “This will be our goal,” said Soo Lee. “I’ll be the goalie. You divide into two teams and play against each other and try to score.”

Henry and Violet were one team. Jessie and Benny were another. They kicked and passed the ball and tried to keep it away from each other and shoot it into the goal. But no one could score. Soo Lee caught every shot they kicked toward the goal.

Then Henry stood at the goal. He caught every shot, too.

“You’re good at the goal. And you’re tall. You would make a good goalie,” Soo Lee told him. “Maybe you should try out for that.”

Watch sat on the sidelines and watched them play. Sometimes he barked. Then, suddenly, just as Benny got the ball and tried to kick it toward the goal, Watch ran out onto the field! He knocked the ball away from Benny. Then Watch began to push the ball with his nose.

Everyone stopped, and when they did, Watch pushed the ball right past Henry and into the goal.

“Watch is a good soccer player, too,” said Violet. She wiped her forehead with her sleeve. “Whew! I’m tired.”

“We should stop. We don’t want to be too tired to practice tomorrow,” said Jessie.

Everyone agreed that it was time to stop. But before they could go home, they had to chase Watch to get the soccer ball back. He was very good at keeping it away from the others.

At last Benny caught him. “Game’s over, Watch,” he said, laughing.

As they walked out of the park, Violet said, “Soccer is not as hard as I thought it would be.”

“You are doing really well, Violet,” said Soo Lee. “So are you, Benny.”

“Thank you,” said Benny. He bent down to pat Watch on the head. “But you know who the best player is? Watch!”

CHAPTER 2
Which Team Is the Best?

“G
osh,” whispered Violet to Jessie. “Look at all these people! What if I’m not on a team with anyone I know?” Violet was a little shy, and sometimes meeting new people made her nervous.

Jessie said, “I’m glad there are a lot of people. That means we’ll have lots of teams. We’ll make new friends, too.”

“Maybe,” said Violet. She still felt shy. But Jessie’s words had made her feel better.

The day for tryouts for the summer soccer league had come at last. The sun was shining, and the grass of the soccer fields next to the community center was very green. Everywhere, children of all ages were racing back and forth passing soccer balls to each other. Others were dribbling up and down the field.

The girl smiled a little as she played with the ball. Her dark ponytail swung behind her, brushing against her golden yellow shirt.

Henry nodded. “It’s called juggling. She looks as if she has very good soccer skills.”

Just then a tall man wearing a cap with a picture of a soccer ball on it called, “Attention! Could I have your attention, please?”

Some of the people trying out for the soccer league came over to face the man. But others kept on playing. The man pushed his cap back and smoothed his short blond hair. Then he stepped up onto the bottom seat of the bleachers, raised a whistle to his lips, and blew it loudly.

All of the players stopped running and talking then, and gathered around him at the foot of the bleachers. “Thank you,” he said briskly. “I’m Stan Post. Everyone can call me Stan. I’m the director of the Greenfield Community Center Summer Soccer League. I’ll also be one of the coaches. Now, I’ll introduce our other coaches and go over a few things before we begin try-outs.”

A boy with long blond hair and a red shirt said loudly, “This is so boring! I know all the rules.”

“I don’t know all the rules,” said Benny, frowning at the boy.

“Shhh!” said someone behind them. 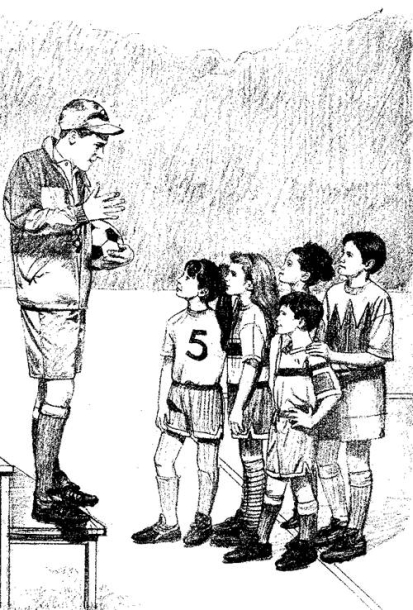 The boy rolled his eyes, but he didn’t say anything else.

When Stan had finished introducing the coaches, he had everyone write their name on a name tag and stick it to his or her shirt. Then he divided everybody into groups. He had each group dribble and pass and shoot while he and the coaches watched. Stan wrote lots of notes on a notepad he was carrying. So did some of the other coaches.

“We’re going to watch everybody for a little bit longer to make sure we put you on the right teams,” Stan explained.

Violet was relieved to see that Jessie was in her group. She was glad that she knew someone. But she was not so glad that the boy in the red shirt was also in her group.

“Okay, everyone,” said the young woman who was their coach. “I’m Gillian McPhee. Everyone calls me Gillian. We’re going to practice a few more drills — moves and skills that you use to play soccer.”

Violet said softly, “What if you don’t know how to do a drill?”

Near her, the boy in the red shirt gave a huge exaggerated sigh of impatience. Violet felt her cheeks grow red.

But Gillian only smiled at Violet. “If you don’t know a drill, I’ll explain it to you,” she said. She looked at Violet’s name tag. “Just do your best, Violet. That’s what is important.”

Violet smiled back at Gillian, feeling less nervous. Gillian had friendly brown eyes. Her dark brown hair was short and curly, and she was wearing tiny earrings in the shape of soccer balls. She was rather tall and her legs looked strong.