“I thought you wanted to be a forward like Elena and score lots of goals,” Soo Lee teased her cousin.

“I’m going to do both,” declared Benny.

“I’m sure you will,” said Grandfather Alden as he approached.

“Keep up the good work, Henry,” said Gillian. “The whole team played wonderfully. I am very proud of you.” She applauded the team. Then the team applauded her. After that, everyone began to get ready to leave.

Craig came over. He shook hands with Gillian. “Good game, Coach,” he said.

“Thank you, Coach,” she said. “Why don’t we go get some breakfast? I was too nervous to eat this morning before the game.”

“Did you hear that?” whispered Benny. “Our
coach
was nervous!”

“Good idea,” said Craig. They smiled at each other. Then Craig said, “I’ll give you a ride. Then we can come back here and watch more soccer.”

The two coaches walked to Craig’s car, got in, and drove away just as Stan and Robert pulled into the parking lot. Craig and Gillian waved. Stan nodded. Robert stared straight ahead, ignoring them.

“He certainly is,” said Grandfather.

“I’m learning a lot about soccer,” Benny went on happily.

Grandfather Alden smiled and patted Benny’s arm. “You all are,” he said.

Just then Jessie, who had been staring across the parking lot, said, “I don’t believe it! The blue van is here.”

“Is the stranger in it?” asked Soo Lee. “Does he have binoculars?”

“I don’t see anyone in the van,” said Jessie. She looked around. “I don’t see the stranger anywhere.”

The others looked all around, too. They didn’t see him, either.

Grandfather Alden said, “The Perezes and I are going to go sit in the bleachers to watch the Bears play the Silver City Rockets.

“We’ll come sit with you,” said Henry. “But not right away.”

Their grandfather’s eyes twinkled. He knew that they were working on a mystery. But he only said, “Okay. See you soon.”

As Mr. Alden and the Perezes walked away, Violet said, “If no one is around the blue van, maybe this would be a good time to go look inside. We might find some clues.”

“Maybe we can look in Stan’s car, too,” said Jessie.

After the Post brothers had left the parking lot, the Aldens strolled over to the van. They kept a sharp watch for the stranger, but they didn’t see him anywhere.

At last they reached the van. Henry looked over his shoulder. “No one is in the parking lot,” he said. “No one has even noticed we’re here.”

“Good,” said Jessie. She led the way around to the other side of the van, so that no one could see them.

Looking inside, they could see that the van was neat and clean. A pair of binoculars was on the seat.

“Look,” said Soo Lee. She pointed to a small sticker in the lower right-hand corner of the windshield.

“Does the spy work for the university?” asked Benny. 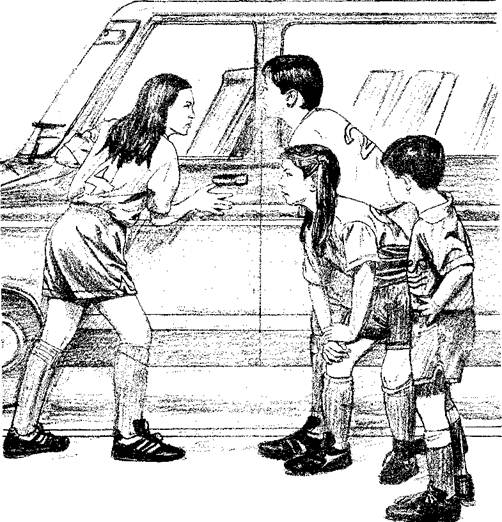 “Hide,” said Henry. “Everybody duck down!”

They crouched low, so they couldn’t be seen near the van. Nobody moved.

Was it the stranger? Had he seen them at his van and come back? Was he about to catch them?

F
ootsteps crossed the parking lot. For a moment it seemed as if they were heading toward the van. Then, nearby, the children heard a car door open.

It stayed open for what seemed like a very long time. Then the car door shut and the footsteps moved away, back across the parking lot and out toward the soccer field.

Jessie let out a long, slow sigh of relief. She stood up so she could see through the van’s window.

Robert was walking back toward the soccer field carrying his gear bag.

“Whew,” said Henry. “It’s a good thing we weren’t looking in Stan’s car. Robert must have forgotten his gear bag.”

“Yes. And he would have caught us for sure,” said Jessie.

“Maybe we should go,” suggested Violet nervously. “There aren’t any clues here.”

The Aldens looked around the parking lot. But no one was there. In the distance, they could see Robert walking toward his team, still holding his gear bag.

The Aldens left the parking lot as fast as they could without running. They had just reached the far end of the soccer field where the Bears were going to play the Rockets, when Soo Lee said, “There he is.”

They all stopped and stared. The stranger was walking toward them. As he passed Robert, Robert spoke to the stranger.

The stranger stopped. He didn’t look pleased for a moment. Then he gave Robert a small smile and nodded.

“Look at that!” Violet gasped. “
Robert
is smiling! And it’s a nice smile. I’ve never seen him do that!”

“I don’t think anybody has,” said Henry.

The stranger walked on. He came straight toward the Aldens. They kept walking, too.

He barely glanced at them as he walked by. But Robert stayed where he was a moment longer, staring after the stranger. Then he turned and went to join his team.

“Wow,” breathed Jessie. “That really
was
a close call. If we had stayed much longer, the stranger would definitely have caught us.”

“Does Robert know him?” asked Benny. “Is Robert working with the spy? Is Robert a spy, too?”

“It’s a possibility, Benny,” said Henry. “But I still don’t know why. It doesn’t make sense.”

The Bears were standing on the sidelines. Robert straightened up as the Aldens and Soo Lee passed. Robert reached into his bag and pulled out his goalie gloves. He began putting them on.

In spite of himself, Henry stopped. “What’s wrong?”

“I don’t believe this!” said Robert in a loud voice. “Someone smeared peanut butter all over my goalie gloves. They’re ruined!”

“Peanut butter on your gloves?” said Benny. He wrinkled his nose. “Yuk.”

Robert showed his brother the gloves.

“When did this happen?” Stan demanded.

“It must have happened when I left my gear bag in the car,” said Robert. “It’s the only time it’s been out of my sight. Someone was watching, and they went to the car and sabotaged my gloves.”

“Do you have another pair?” asked Stan.

“I don’t want to hear excuses. The game is about to begin. Just do it,” Stan snapped, and walked away.

“I have a pair of gloves you can borrow,” said Henry.

Robert swung around to face them. He drew back his upper lip. “Oh, yeah?” he said, with a sneer in his voice. Then he looked past Henry. “You do?” he said, in a much nicer tone. “Would you mind if I used them? I’d really appreciate it.”

“Sure,” said Henry. He unzipped his own gear bag and took out his gloves. He handed them to Robert.

Robert smiled. It was another nice, normal, friendly smile. “Thanks, Henry,” he said. “Thanks a lot.”

He put the gloves on and ran out on the field to the goal.

“Why did Robert get so friendly all of a sudden?” wondered Soo Lee aloud.

“You did a good thing,” Benny told Henry. “You were a good sport.”

Henry laughed. “It’s a lot more fun than being a bad sport. Come on, let’s go sit with Grandfather.” The Aldens headed up to the bleachers.

A gust of wind whipped across the field. A familiar blue-and-gold cap suddenly whisked by Jessie’s foot. She reached down and grabbed it. She turned and froze. 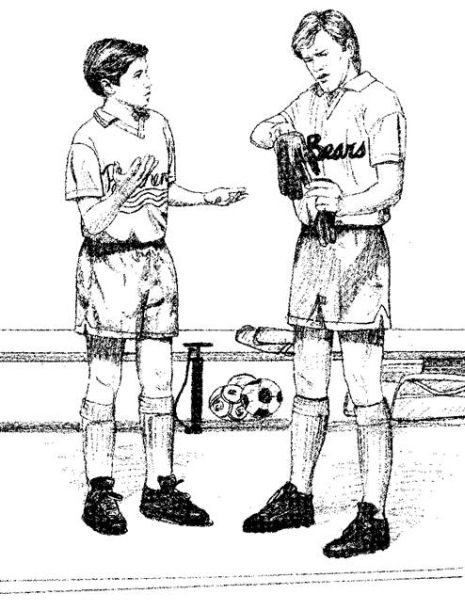 The stranger was standing right behind them. He was holding his binoculars in one hand. He held out his other hand to Jessie. “You caught my cap,” he said. “Thank you.”

“Y-you’re welcome,” said Jessie. She handed the man his cap, then turned and hurried after the others.

As they sat down, Jessie watched the stranger out of the corner of her eye. He climbed to the top corner of the bleachers and sat down. He pulled his cap down and raised his binoculars to his eyes.

She nudged Henry. “There he is,” she said. “He was right behind us when you gave your gloves to Robert. I think he went to the van to get his binoculars.”

Violet said in a puzzled voice, “Who would sneak out to the parking lot and put peanut butter on Robert’s gloves? It couldn’t have been Benny’s spy, could it have?”

“You’re right, Violet, it couldn’t have been,” said Soo Lee. “We went into the parking lot just as Robert and Stan left it. And we were there the whole time, even when Robert came back to get his gear bag.”

“Well, if the spy didn’t do it, that means he didn’t do any of those other bad things, right?” asked Benny.

Jessie’s thoughts were whirling. “I don’t know,” she said. She put one hand on her forehead and tried to figure it out. She concentrated with all her might.

She lowered her hand and looked over at the stranger. Then she repeated, “I don’t know who’s done the bad things. But I think I do know how we can find out who your spy is, Benny!”

The man behind the counter was stuffing envelopes.

The man looked at Jessie over the tops of his glasses. “Yes?” he said.

The Aldens had ridden their bikes over to the university. It had been a long ride, and they were very tired. Soo Lee hadn’t been able to come with them.

“What sort of information?” asked the man.

“We’d like to find out who a car registration number belongs to,” said Henry.

“Number one-two-three-four-five-seven,” chimed in Benny proudly. “It’s like counting, except that the last number is wrong.”

The man got up from his desk and crossed the room to a file cabinet. He opened a drawer and rifled through some files. Finally he said, “Yes, we have a vehicle registered at the university under that number.”

The man swung around and peered at Violet now. “Why do you want to know?” he asked. “Has there been an accident?”

“Not exactly,” said Jessie. “I don’t think the things that have been happening have been accidents.”

The man peered at them all for a moment longer. Then he said, “I’m not supposed to give out that information without proper authorization.”

“How can we get permission?” asked Jessie.

“From the office manager,” said the man. He added, “She’s not in today. She’ll be back tomorrow.”

The Aldens walked slowly out of the office. They were very discouraged. They walked down the front steps of the building and across the campus to the bike rack where they had parked their bikes.

“We could ride our bikes back over tomorrow,” said Violet.

“I guess that’s what we’ll have to do,” said Jessie.

They all looked at him in amazement.

“Why not?” asked Violet.

“If the blue van is here,” said Henry, “it is parked in the Athletic Center parking lot. Remember? It was an athletic staff parking sticker.”

“You’re right,” said Jessie, getting excited. “And even if it is not there, maybe we can ask people who work there and they will know who the blue van belongs to.”

“Oh, good,” said Violet as the Aldens got on their bikes and began to pedal to the Athletic Center. “I’m glad we don’t have to ride our bikes all the way back here tomorrow.”