Read Someday We'll Tell Each Other Everything Online

Someday We'll Tell Each Other Everything 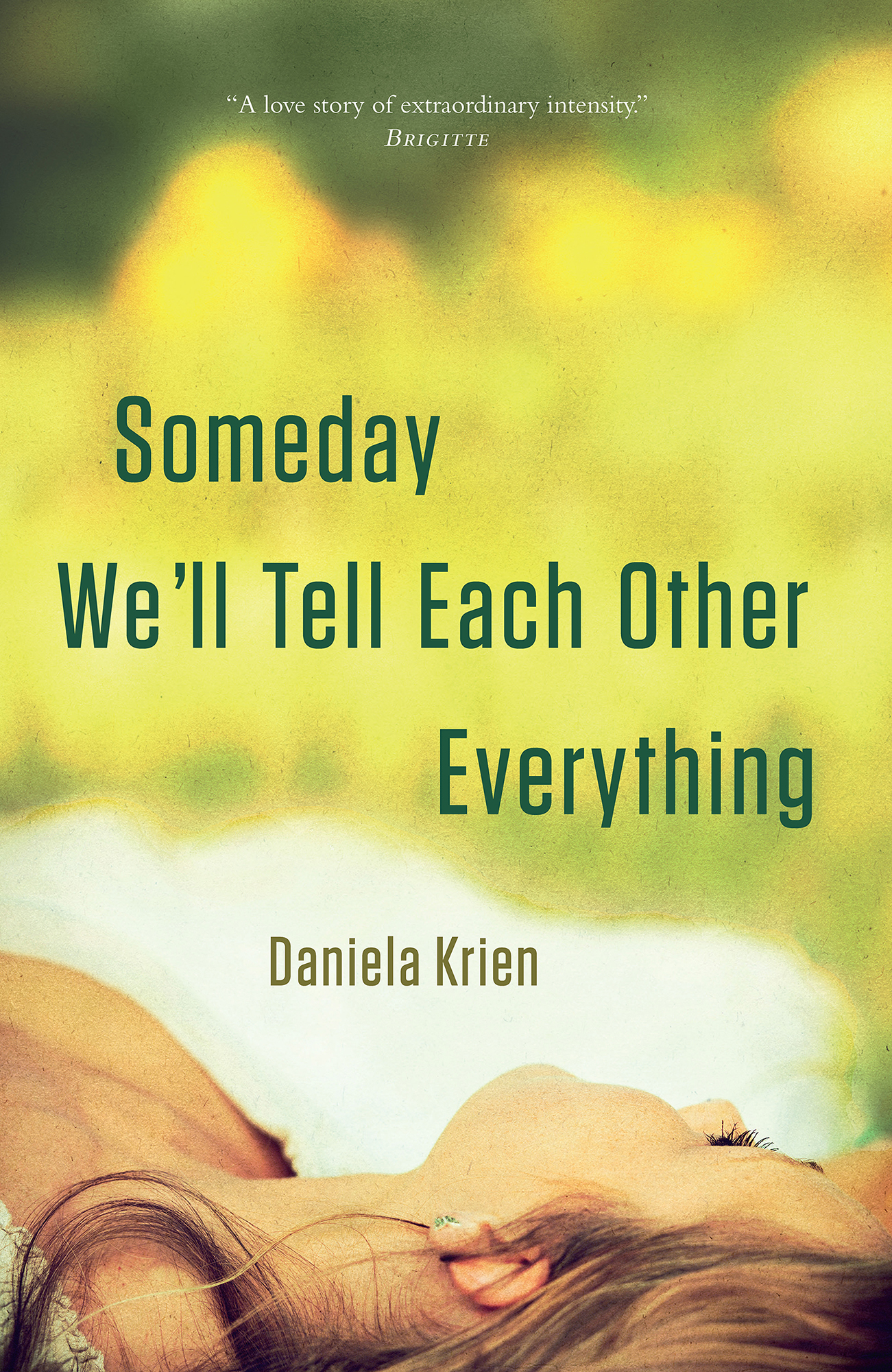 Someday We'll Tell Each Other Everything 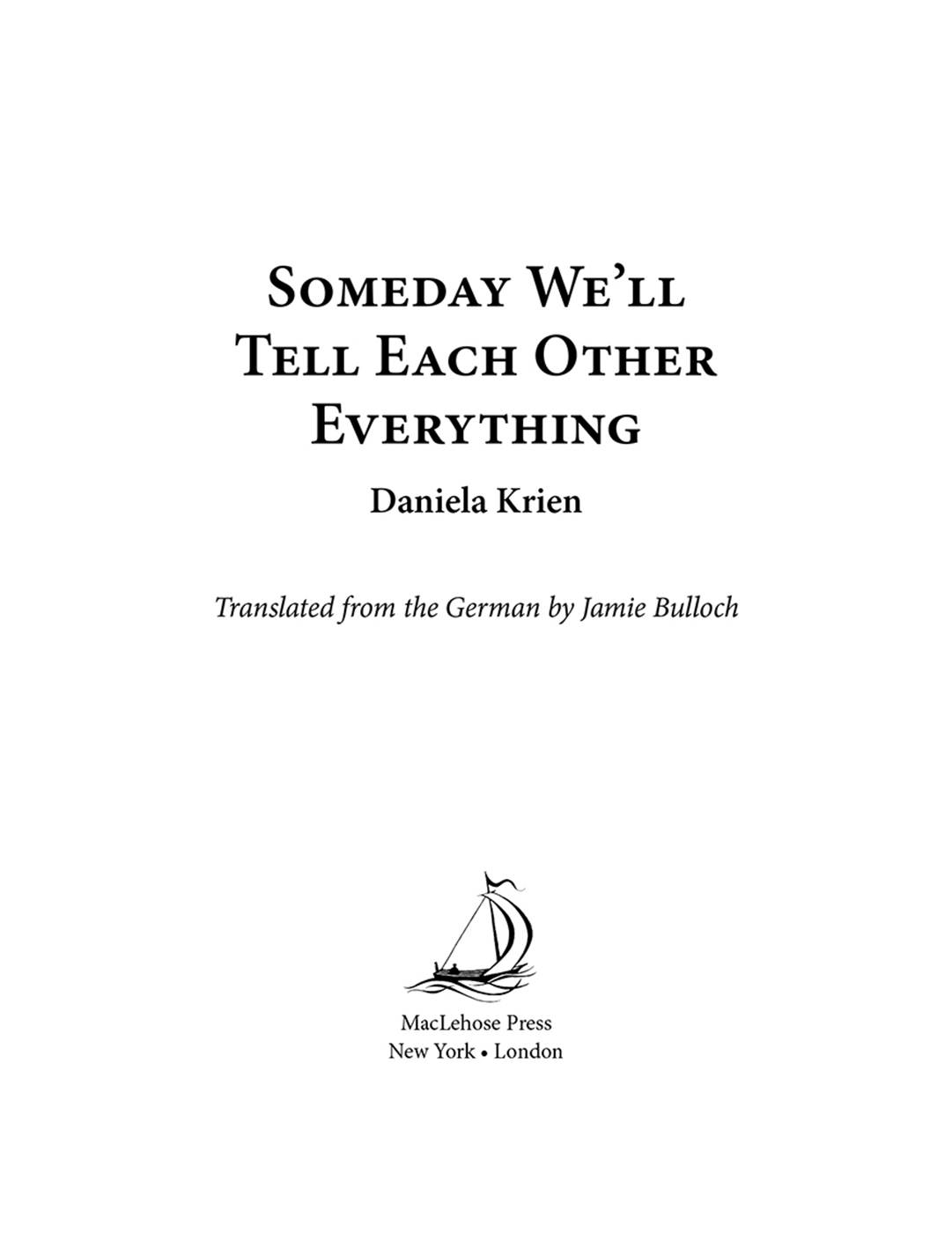 An imprint of Quercus

First published in the United States by Quercus in 2014

Please purchase only authorized electronic editions, and do not participate in or encourage electronic piracy of copyrighted materials. Your support of the author's rights is appreciated.

This book is a work of fiction. Names, characters, institutions, places, and events are either the product of the author's imagination or are used fictitiously. Any resemblance to actual personsâliving or deadâevents, or locales is entirely coincidental.

for Christian, Clara, and Rosa

It is summer, a wonderfully hot summer. At the farm the buildings are ranged around three sides of a yard. In the middle is the long, detached house, which has two floors and a large attic; the barn, on the left-hand side, has large wooden doors at the front and back. A few meters behind it is a wide, low wooden buildingâthe sawmill. Meadows and pastureland stretch down to the river; a short way upstream, just before a weir, is a dilapidated shed. On the far side of the river a densely wooded hillside rises steeply. In the farm building on the right are the cattle and chickens. Behind it, in a raised wooden hut littered with sawdust and hay, live the geese. An extension that houses the vehicles adds a further ten meters to the thirty-meter-long cowshed. The extension also has large wooden doors at both front and back. From its back door, toward the left, you can see the sheep
shed bordering the kitchen garden; straight ahead lie fenced meadows, the railway embankment, and, some distance beyond the tracks, but clearly visible, Henner's farm.

The Brendels' farm and Henner's farm are the largest in the village. They say that nothing inside Henner's house has changed since the war: not the furniture, stoves, or floors, nor the tiny windows that leak. It must be cold in winter. Everything's more modern at the Brendels'; they've even got central heating. Entering the house on the ground floor you come into a small hallway. To the left and right, doors lead into the kitchen and living quarters; straight ahead is a flight of stairs, and behind the staircase is the door to the kitchen garden and the entrance to the cellar.

Siegfried, Marianne, and Lukas sleep in the downstairs bedrooms, Frieda and Alfred have the rooms upstairs, while the attic belongs to us, Johannes and me. The kitchen, the biggest room in the house, still has an old stove you can cook on. But for years now Frieda, the grandmother, has been using the electric cooker. The chairs are older than Frieda, as are the large dining table in the middle of the room and the enormous dresser. Only the wall cupboard and one of the worktops are postwar. Everything is clean and tidy, but it's always gloomy. Now that it's summer, the windows are open most of the time. The windows are old with handles that turn; white paint is flaking off the frame. The low ceiling is oppressive, but also protective.

Siegfried, the father, is sitting at the table. The chestnut tree in the yard gives dense shade, allowing only tiny scraps of evening light through the windows. Nobody is speaking; the faces of the family are lit so dimly I can hardly recognize them.

One by one the others sit down too. Marianne, the mother; Frieda, the grandmother; old Alfred, who in another era would have been called a servant; and the sons, Johannes and Lukas.

Siegfried cuts a thick slice from the brown loaf and spreads it with butter. He takes a few slices of red pepper, which his wife has cut. He eats slowly and doesn't speak. Then he smiles and says, “It's great we can buy peppers now, they're very good for you. Did you know that?” He looks up without raising his head.

His sons do not answer. Marianne, his wife, nods and says, “We'll have many more soon.” Siegfried offers the plate with the peppers to Frieda. “Try some,” he says, with a smile of encouragement.

I look around, trying to understand the rules that govern life here; I haven't lived in the house for long. One Sunday morning in May Johannes said to me, “I'm not going to take you back home today. My parents want to meet you.” I stayed the night and haven't left since. It's now June.

We go on eating in silence. I listen to the noises the others make as they chew. Alfred is the noisiest. Without looking at Siegfried he mutters, “Liese's going to calf tonight. She's showing all the signs.” Siegfried nods and peers at the cowshed through the window.

“On your motorbike?” Marianne asks, getting up too.

“Sit back down.” Now the father's voice has that quiet but menacing tone I like, though it scares me slightly. The others aren't scared.

“Can't I come with you, Johannes?” I ask, fixing my eyes on his bowed head. But he doesn't look at me. Doesn't answer, either. He stands there for a moment and then leaves the room. In silence.

A road runs past both farms, with two narrow tracks leading to the houses. On the other side of the road a lane leads down to the village, about three hundred meters away from the farms. Both sides of the lane are lined with lime trees. Now, in June, they are giving off a heady scent. Near the bridge crossing the river is the tavern that takes its name from these limes.

Further on, the houses and smaller farms, the post office, co-op, and church are dotted around the village pond. Narrow lanes snake their way between the buildings, leading to more houses and farms. But one of them goes dead straight from the center of the village to two low concrete structures that look as if they've fallen into the field accidentallyâthe headquarters of the collective farm. The huge collective pig shed towers proudly behind.

It's an unusual village. It survived the war and the GDRâthe German Democratic Republicâas Frieda likes to say. Apart from the odd house and the collective farm headquarters, there's little that's modern. There aren't many places like it anymore, and on weekends people come out here from town for a walk.

The chickens are running around outside in the yard. Marianne forgot to lock them in. Frieda looks out of one of the upstairs windows and shouts, “Marianne, the fox is going to eat those chickens! After twenty years you still haven't gotten itâwhen it's dark the chickens have to be put in their coop.”

The old chestnut tree casts a shadow over the entire house. But Siegfried told us it's going to be cut down soon. He wants to plant a new tree; the old one has grown too big.

Marianne goes as far as the barn, just in time to see her son race away on his shiny black MZ. I've wrapped a scarf around my shoulders; I found it in Marianne's wardrobe. I watch her from the front door. “Suits you,” she says when she comes back, adding, “He'll be fine.”

I'm not worried. She's the one who can't relax until he's back home. There have been several fatal accidents on the road recently, including one of Johannes's friends. I stand there calmly, puffing cigarette smoke into the fresh country air, then I help put the chickens away.

It is almost midnight when I hear the rattle of his motorcycle, and then, finally, the engine dying out. The attic rooms store the heat
of the day; I've swapped my summer dress for a white nightdress I found in one of the many chests in the attic. It must have been Frieda's once.

If I look out of the back window, I can see the rushing river and rolling countryside stretch out before me; I can see the woods and the cows in the meadows. Out front I look onto the farmyard and the chestnut tree, which is full of birds. From the window in the gable I can see the pasture, sheep shed, railway tracks, and beyond these Henner's farm. I never realized how beautiful this landscape was until I moved in here. For the moment I can think of no better place to live.

But now it is nighttime and all I can see is Johannes pushing his bike into the shed. When he comes back out, he lights a cigarette and looks up. He can't see me. I've turned out the light so I don't have to look at the endless procession of spiders descending from the ceiling on transparent threads. They give me the creeps, and I know he finds this childish fear of mine ridiculous.

He's been in town, with his artist friends.

When he comes into the room I pretend to be asleep. He chucks his clothes on the floor and goes to brush his teethânot for long enough, as usual. It's late and we've got to set off early tomorrow. I'm going to lie again and say I don't have to be in until third period; I'll just stay in bed until he comes back. Johannes is in his final year; we go to the same school. He's in the twelfth year and I'm in the tenth. When I was still living with my mom and grandparents, my journey to school began with a forty-five minute march down the hill to our local town, followed by a bus ride to the county town. Altogether it took me about an hour and a quarter. And the journey home was even slower because I had to go back up the hill.

Now Johannes takes me to school on his bike, but I haven't been going in that often recently. I've lost count of the number of lessons I've missed. I know I'm going to fail at the end of the year.
My mornings are spent reading and smoking; in the afternoons we go for rides in the country, sometimes to the artists' cafÃ© in town, where even though it's still early we drink wine and vodka, and people talk and talk and talk. Johannes likes it, but I don't really know what to make of it.

Then we climb the stairs to our spiders' nest and make love. Johannes turns out the light, he's gentle and tender in bed; he never hurts me. He's the first man I've had. I think I love him.

Middle C by William H Gass
Total Control by David Baldacci
Undue Influence by Steve Martini
An Unlikely Alliance by Rachel van Dyken
CROW (Boston Underworld Book 1) by A. Zavarelli
The Secret Life of Bees by Sue Monk Kidd
Stepbrother Needs (His Twisted Game, Book Three) by Chloe Hawk
Twenty Something by Iain Hollingshead
The Woman on the Mountain by Sharyn Munro
The Birthday Lunch by Joan Clark
Our partner