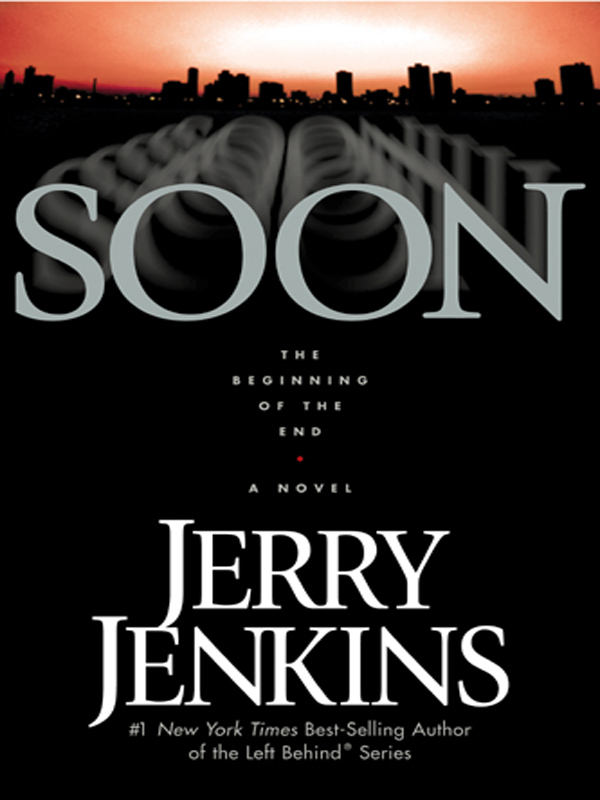 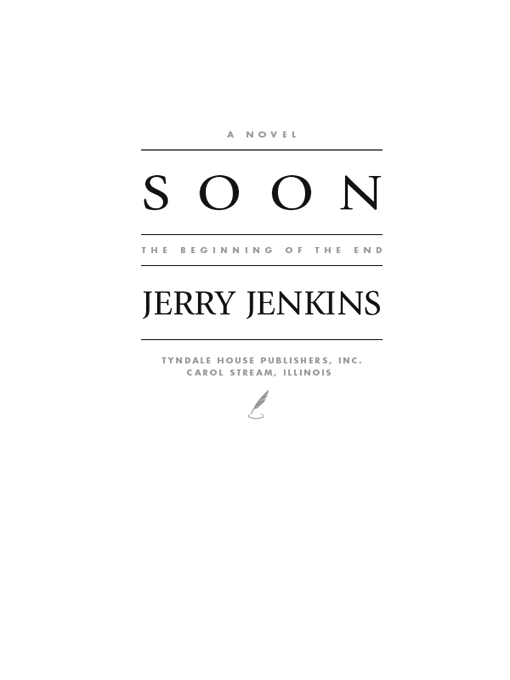 Copyright © 2003 by Jerry B. Jenkins. All rights reserved.

Published in association with the literary agency of Vigliano and Associates, 584 Broadway, Suite 809, New York, NY 10012.

Some Scripture quotations are taken from the New King James Version®. Copyright © 1982 by Thomas Nelson, Inc. Used by permission. All rights reserved.

This novel is a work of fiction. Names, characters, places, and incidents are either the product of the author’s imagination or are used fictitiously. Any resemblance to actual events, locales, organizations, or persons, living or dead, is entirely coincidental and beyond the intent of either the author or publisher. 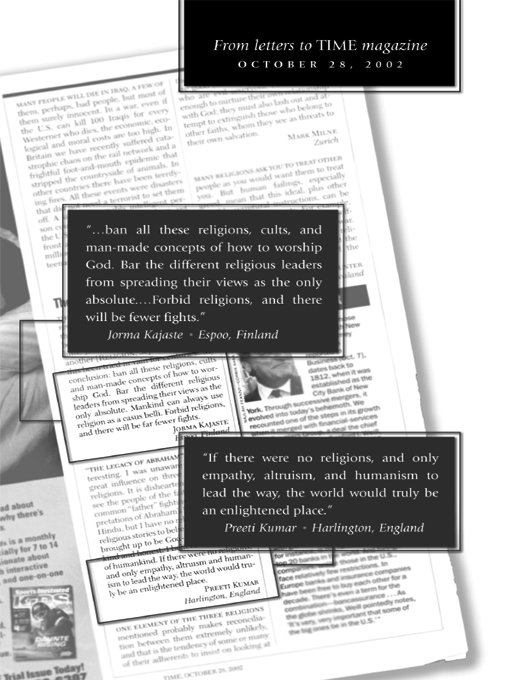 AT THE CONCLUSION OF WORLD WAR III

AT THE CONCLUSION OF WORLD WAR III

IN THE FALL OF 2009,
it was determined by the new international government in Bern, Switzerland, that beginning January 1 of the following year, the designation A.D. (anno Domini, “in the year of our Lord” or after the birth of Christ) would be replaced by P.3. (post–World War III). Thus, January 1, A.D. 2010, would become January 1, 1 P.3.

CAPITAL OF THE COLUMBIA REGION,
UNITED SEVEN STATES OF AMERICA

A COMMON CITIZEN
would not have recognized the danger. But the lone occupant of the Chevy Electrolumina was retired Delta Force Command Sergeant Major Andrew Pass.

He touched the tip of his right thumb to the tip of his pinkie, activating cells implanted in his molars. He could have dialed with his other fingertips, but he opted for voice recognition and quickly recited the numbers that would connect him on a secure, private circuit to his brother in the underground compound.

“This is Jack, Andy,” came the answer that resonated off his cheekbones and directly to his eardrum. “GPS shows you heading north on Sixteenth toward Silver Spring.

“Roger that. My ETA was eleven-fifteen—”

“Looks like an extended Suburban Hydro. They’re on to me.

“Snow’s deep and packed, but I have to try.

“What do you need?

“Just wanted you to get hold of Angela in case I can’t.

“No fatalism now, Andy. Come on.

“If I don’t see you in ten minutes, spread the word.”

Andy pressed his pinkie and thumb tips together again and peeked in the rearview mirror.
Smooth.
The hydrogen-powered Suburban was hanging back almost three blocks. By now they had to know that he knew. Clearly they weren’t going to blow this by being overeager.

He thought about calling his daughter himself, but he had to concentrate. Jack would know how to break it to her.

Andy took a right and then a left, dousing his lights. That wouldn’t shake the Suburban, and with its colossal power pack, it could run him down in seconds, even in this weather. For the moment he was out of his pursuers’ line of vision. Andy reached deep into his pocket and pulled out the flat, smooth, white stone that told those he wanted to know that he was one of them. He lowered his window a few inches and tossed it into the frigid night. He was going to have to ditch the Chevy too.

He wheeled into an alley, eyes peeled for a spot to hide the small car. Nothing. He leaped out and sprinted three blocks through icy flurries, darting in and out of shadows, keeping to alleyways. He was grateful his daily jog and workout afforded him such conditioning at fifty-six. But he chastised himself for leaving the compound without a weapon.

It had been months since Andy had had even a close call, but that was no excuse for laxity. If only he could distance himself enough from the Suburban, he could get Jack to have someone pick him up in a fresh, unsuspected car.

Another black Suburban whooshed past ahead of him and slid to a stop. Andy heard doors slamming and boots crunching. He whirled to head back out the way he came, but the original tailing Hydro roared up, blocking his escape. Andy slipped but stayed upright as he quickly moved left to use a window ledge, hoping to hoist himself atop a one-story building. Too late. His pursuers had filled the alley, and he faced the barrels of high-powered weapons.

He would not respond.

Another uniform, a young man, patted him down. The vapor rushing from his mouth told Andy the kid was excited. “Unarmed.” He cuffed Andy’s hands behind his back, the steel cold on his wrists. “I’ll wand him.”

He ran a detector over Andy’s limbs, stopping when a high tone signaled the ID biochip beneath the skin of his right forearm. The young man studied an LED readout. “It’s Pass, all right.”

Silver Hair waved the rest of the uniforms into position. They guided Andy to a windowless truck and boosted him into the back. When the door was shut, Andy lowered himself to the floor. With his hands behind him he couldn’t keep from pitching and rolling, banging into the door as the truck took off.

Would his family or his compatriots have a clue what became of him? Could he escape? He had to try. He had to do something.

Andy judged the ride at between ten and fifteen minutes, at a speed that sent him bashing from wall to wall. When the truck finally skidded to a stop, he wrenched himself into a sitting position by planting one foot and pressing his shoulder against the side of the truck. The doors opened, and he was yanked to the ground.

The icy pavement was gritty, and the air smelled of moldering brick. They seemed to be in a rundown industrial park. A few buildings were operational, judging by their outside lights, but no doubt were deserted at this hour. The others looked abandoned, black hulks beyond the headlights of the cars ringing Andy—the Suburbans and a new one, a sleek dark limousine. Andy strained to see who was inside, but its tinted windows were impenetrable
. Some bigshot.
He shuddered.

The silver-haired woman stood by the limo, talking to someone in the backseat. She came into the light, nodding to an underling who directed one of the Suburbans to the front door of the dark ruin to the left. Two men pulled a fifty-five-gallon drum from the back of the vehicle and awkwardly rolled it into the building. Two others grabbed Andy’s arms and hustled him toward the door, a third propelling him from behind. They shoved him through the door and into a cavernous room where the two with the drum were prying off the perforated lid. It clanged to the floor.

Andy closed his eyes and drew in a long breath, acrid fumes attacking his nostrils. Fear flared in him. He had imagined such a moment. He prayed he would remain stoic.

The woman loomed over Andy, her eyes as silvery as her hair.
Psycho eyes
.

She moved close and bent toward Andy’s ear, her breath hot and wet. “Recognize those fumes, Sergeant Major?”

Andy glared, pulse raging, determined to stay silent. Surrender wasn’t in his nature. A flying kick could topple this witch. A lowered shoulder and a head butt might take out one or two more. But the odds were ludicrous. Even if he could make it to the door, there were at least four men outside, plus the driver and whoever else was in the limo—all were surely armed. Was he willing to die their way or with bullets in his back? Time was running out.

“Actions have consequences,
An
dy,” the woman said. “Now others will get the message. The USSA does not tolerate subversives.”

Andy wanted to spit in her face.
Stay silent. Strong.
His mind reeled.
Torture? Death?
He’d risked death on the battlefield but had never faced such personal horror. Was his faith strong enough?

So this was it then? Ignominious death without a fight? Andy had been taught that courage was not fearlessness but rather the management of fear. He wasn’t managing well.
I’m actually going
to die.

Two enforcers lifted him over the barrel, which was lined with napalm. As they lowered him Andy tried to kick, but his heels caught the rim of the drum as his hands and back slid into three inches of the surprisingly cool, jellied gasoline. One of the uniformed men jammed Andy’s feet into the drum. There he sat, pinned—feet above his head, chin pressed so tight to his chest that he could barely breathe.

“Ready, sir!” the woman called out.

Andy heard no reply but assumed her superior officer—the person in the limo?—was now in the building.
For what? To see
me suffer?

Someone pressed the lid down over the barrel, sealing Andy in. Dim light peeked through the holes. None of his training had cured his claustrophobia. His breath came in great rushes through clenched teeth.

The strike of a match. The tiny flame dropping into the barrel. The explosion of fumes. Andy willed himself to make no sound, but he failed. He had drawn in enough air to fill his lungs just before the conflagration enveloped him with a heat so hellish he could not fathom it. And he exhaled with a scream so piercing he could hear it above the roar of the fire.

He screamed as long as he could, knowing his next breath would draw in the flames and fuel for which his body had become a mere wick. Insane from the pain and unable to move, Andy finally sucked in the killing breath—the merciful, final invasion that roasted his lungs and heart and transported him from one world to the next.