Read Soothsayer: Magic Is All Around Us (Soothsayer Series Book 1) Online

Soothsayer: Magic Is All Around Us (Soothsayer Series Book 1) 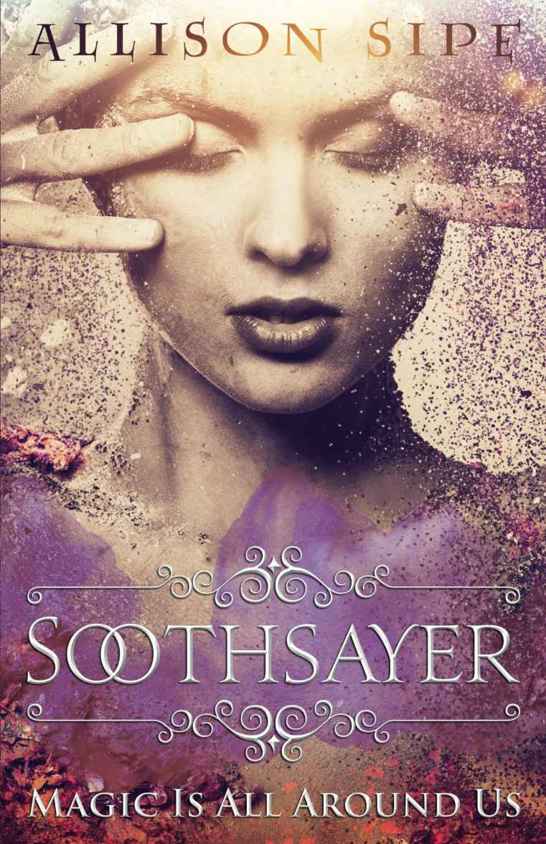 This book is a word of fiction.  Names, characters, places and incidents are either the product of the author’s imagination or are used fictitiously and any resemblance to actual persons, living or dead, events, or locales is entirely coincidental.

No part of this book may be reproduced, scanned, or distributed in any printed or electronic form without the explicit permission of the author.

Thank you for all your love and support.

Without you
Soothsayer
would still be sitting

on the shelf collecting dust.

You and I are not the polite

people that live in poems.

We are blessed and cursed

Utter darkness enveloped the world around us, the air thick with mist. I couldn’t see anything beyond my own feet. The trees rose up out of the ground like hands of the dead, cold and lifeless. The fallen leaves and sticks crackled under my boots like bones being snapped in two. A chill ran through my spine, leaving goose bumps on my flesh as I continued on behind my companions.

No one said a word as we walked. The even breathing and footsteps of the men in front of me was the only indication I wasn’t alone.

I didn’t know why we were being led into the woods in the middle of the night. I only knew it was of grave importance that no one knew we were here. After what seemed like hours of trekking through fallen leaves and mud, we came to an abrupt stop. I looked around but found nothing of consequence in sight. A small tremor of panic rose inside me as we stood in silence. The fog was thicker here than when we first started our journey and I could barely see Thomas Ainsworth standing next to me as we huddled together in the small clearing.

“What do you suppose we’re here for?” I whispered as I leaned toward Thomas.

“Don’t know, but I think we’re about to find out,” he replied and pointed toward the darkness in front of us.

I couldn’t see anything, but I could hear each footstep crackle in the heather. I felt my muscles spring to life and readied myself for whatever might be making its way toward us.

“
Inlíhtnes,”
a woman spoke the enchantment and stepped into the clearing. Illuminator Orbs like I’d never seen glided toward us and lit up the small patch of grass where our group had gathered.

Soft blue light fell on each of us, banishing all other colors to the shadows. My nerves calmed as I recognized the beautiful woman standing before us. Her name was Belinda Hughes and she was a gifted Soothsayer. Her dark hair swirled around her face and down her shoulders like seaweed as she walked toward us. Her cloak reached the ground and was pulled tight around her, shielding her from the cold.

Belinda was blessed with one of the most respected gifts in our community: she had the gift of Sight. Only a direct descendant of Merlin himself could be born with the gift of seeing the past, present and future.

We all bowed to her out of respect as she stopped in front of us.

“Thank you for meeting me on such short notice,” Belinda’s smooth voice purred.

I straightened up and attempted to relax, but knowing that it was Belinda who brought us out here had my nerves coiled and ready to spring at the first sign of a threat.

“Of course, Milady,” Colin said, and inclined his head out of nervous habit.

“I’m sure you’re all wondering why I had Colin gather you up and drag you all the way out here.” She paused a moment, considering her words before she continued. “I’ve had a vision of the utmost importance that mustn’t fall into the wrong hands. As you are all aware, your families are the most powerful and well respected in the Magical World.” She glided back and forth as she spoke, barely rustling the leaves under her feet.

“Someday, many years from now, your influence will reach beyond this land and across the sea to America. Because of your families’ influence, I’ve chosen to entrust my vision to the five of you,” she paused and looked at each one of us. “But before I tell you anything, I must mark each of your bloodlines with a spell of secrecy. Should any one belonging to your bloodline betray what I tell you this evening, all will know of your betrayal. Do you understand?” She asked the question with grave sincerity.

We all nodded in unison.

“Edric Patridge,” Belinda called as she pulled a crude-looking dagger from inside her cloak.

Edric took a step toward her and waited for instruction.

“Give me your hand,” Belinda said, extending her own.

Edric pulled his leather gloves off, finger by finger and extended his exposed hand to Belinda. She pricked the center of his palm three times and a pool of blood began to form.

We all watched mesmerized as Edric’s blood floated above his hand in a small, pebble-sized ball.

“Vel omnes noverit proditio,”
she concluded. As Belinda finished the spell, the blood sank back down into Edric’s skin and the pin pricks on his palm vanished without a trace.

“William Maxwell,” she said, looking at me when she finished with Thomas.

I stepped forward, inclined my head toward hers, and extended my hand. My pulse quickened as she pricked my palm. The blood felt warm on my hand as she recited the spell. Moments later the blood was gone and my hand was cold once again.

She performed the same spell on Kyle Landon and Colin Deardon and then slipped the dagger back into the concealed pocket of her cloak.

“I have seen a great war,” she began without preamble, “that will threaten to enslave the Magical World. The dead will rise and seek to take the throne that once belonged to Arthur.

“Who will rise from the dead?” Thomas’ voice cracked as he spoke.

The blood in my veins turned to ice, “But she can’t come back, she’s been dead for hundreds of years,” I said in disbelief.

“She can and she will,” Belinda said gravely.

“Is there nothing we can do to prevent her?” I asked, truly afraid of what it might mean for future generations if the Magical World was enslaved by Morgana.

“It cannot be prevented, she will rise with a vengeance. But there is something else,” she said and paused, mulling over her next words carefully. “There will be a woman named Violet. She will be the key to waking the Lady of the Lake and bringing an end to Morgana’s war once and for all.”

“Lady of the Lake,” Thomas exclaimed, near breathless, “but how, she entombed herself after Arthur’s death centuries ago.”

“Violet will carry the mark of Merlin’s bloodline and she’ll be able to wake The Lady from her slumber. It’s the only way to banish Morgana back to the land of the dead.”

“After everything that happened with Arthur, do you really think The Lady will want to help us again?” It was Colin who spoke, seizing our attention.

“He’s right, there’s no magic powerful enough to wake her from the slumber of a broken heart.” Edric kicked at the dirt as he spoke.

“You’re right, there isn’t any magic powerful enough. But there will be, and that’s why I need you to pass this prophecy down through your heirs,” Belinda explained.

“How are they supposed to find this woman when the time comes?” Edric asked.

“She will find who she is meant to find.”

I couldn’t be sure, but I thought Belinda glanced in my direction.

“And how does this war come to be?” Kyle asked, his voice barely a whisper.

“Through betrayal. It’s the reason I have marked your bloodline, to fish out the traitor when the time comes. You see, the future is not as simple as our time is now. This makes it difficult to be clear of the small details,” she said, her brow furrowed like she was trying to see through a thick haze of fog. “I have been able to narrow it down to the five bloodlines gathered here, but that is all. Each one of your descendants will play a key role in what happens in the future. And as the time nears, a future Soothsayer will be able to see more clearly.”

“How do you suggest we pass this information down through the generations?” Thomas asked, fiddling with the pocket watch in his hand.

“That will be up to you.” Belinda took Thomas’s hand in hers to stop his fidgeting. “Do you all understand?”

It was rare for a Soothsayer to share their visions with anyone. The fact that she dragged us out to reveal a vision to us proved how important this prophecy was.

“Off with you then. If anything else comes up I shall summon you for another meeting,” Belinda announced. Her eyes met mine for a pregnant moment and a small smile touched her lips. “Just a moment, William.” She stepped toward me and placed her hand on my shoulder. Her expression became unfocused and distant. I held my breath and waited for her to return to the present. As her eyes came back into focus, she made a quick glance toward the other men.

“What is it?” I asked, my nerves shaking my body even in her grasp.

She searched my eyes a moment and then leaned in closer to me, her fingers digging into my shoulder. “Robert must find her before it’s too late,” she whispered against my ear.

Violent chills quaked up my spine as she released her hold on me and disappeared into the darkness. The small orbs of light followed behind her and then vanished as well. None of us moved. We stood watching as Belinda disappeared back into the forest. I rubbed my hands against my shoulders to fight off another shiver as her words echoed in my head.

After what seemed like an eternity of silence Thomas turned to me, nodded, and disappeared into the fog. Edric, Colin and Kyle each did the same, leaving me standing alone in the forest. I took a deep breath and started back to town as well. My mind raced over everything Belinda had said and I couldn’t help but wonder who Robert was. What could I possibly do to ensure he found Violet when the time came?

I walked inside, craving the comfort and warmth of my home. I pulled my journal out from the desk drawer, threw another log on the fire and poured myself a dram of whiskey. I sat before the hearth in my large armchair and recounted the evening in my journal. I spared no detail and hoped my account of tonight’s events would be enough. I sipped at the rest of my drink and let the fire and whiskey warm my bones and soothe my nerves. Only when sleep threatened to overtake my energy and cloud my memory did I close my journal and drain my glass. I returned the leather-bound chronicle to the desk’s bottom drawer and recited a spell to disguise it from prying eyes. With my duty done for the night, I headed upstairs to bed. The sun crept over the hills as I crawled under the covers and fell asleep.