Soul Screamers Volume Four: With All My Soul\Fearless\Niederwald\Last Request: 4 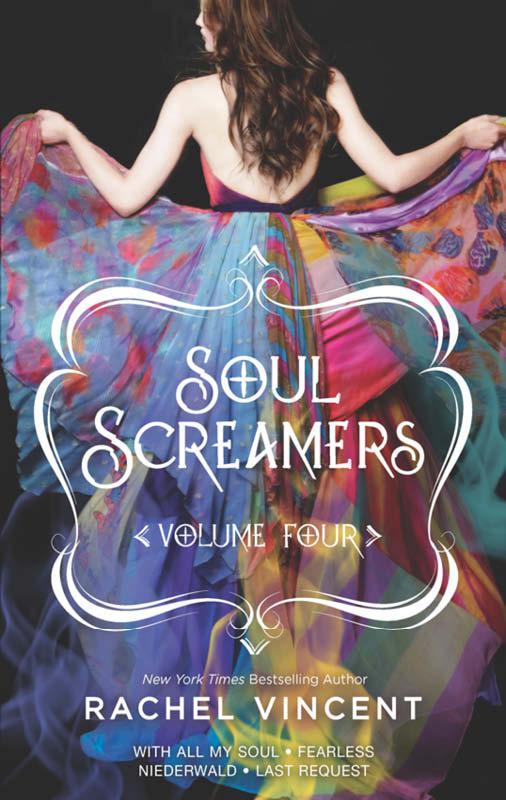 The final collection of
New York Times
bestselling author Rachel Vincent’s Soul Screamers series is packed with emotion, with intrigue, with secrets, with family—and above all, with love.

Don’t miss
WITH ALL MY SOUL
FEARLESS
NIEDERWALD
and a brand-new novella, LAST REQUEST

“The reader can get behind Kaylee and her predicament: saving the world from unspeakable evils while trying to hold on to the ones she loves. But what really makes this story stand out is Vincent’s brilliant otherworldly characters.”
—
VOYA

“A fitting send off for Kaylee Cavanaugh….It’s a bittersweet farewell for this fantastical cast of characters.”
—
RT Book Reviews
on
With All My Soul

“The story rocks (for teens and adults, I might add).”
—
Book Bitch

“Fans of those vampires will enjoy
this new crop of otherworldly beings.”
—
Booklist

“I’m so excited about this series.”
—
The Eclectic Book Lover

“A must for any reading wish list.”
—
Tez Says

“A book like this is one of the reasons that I add authors
to my auto-buy list. This is definitely a keeper.”
—
TeensReadToo.com 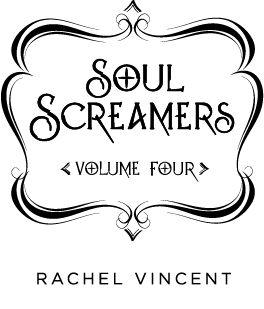 It has been my profound pleasure and privilege to spend the past five years writing the Soul Screamers series. After seven novels and six short stories/novellas, I’ve spent more time in Kaylee’s world than in any other fictional world I’ve created, and at this point, it’s hard to remember a time before Kaylee.

The Soul Screamers series was my first foray into young adult literature, a segment of publishing where I feel very comfortable. While I don’t intend to give up writing for adults, neither can I imagine not writing for teens, and I owe that to Kaylee.

Kaylee, on the other hand, owes everything to you. All of you, who read her stories, then lent them to a friend. Or recommended them online. Or preordered the next in the series. Or wrote to tell me which characters you love and which you hate. I will be forever grateful to you all for giving Kaylee a chance.

Now, I ask you to follow her on this last journey, in
With All My Soul.
Kaylee has earned her happy ending, but it will not come easily. She has evil to defeat, and finally she understands that victory—not to mention retribution—cannot come without sacrifice.

I’ve heard from many readers since
With All My Soul
was first published in the U.S., and with those letters and comments in mind, I can tell you there may be tears. But don’t give up before the last page. My goal for the end of the book was to have readers smiling before their cheeks could dry.

In addition to
With All My Soul,
I’m thrilled that this omnibus contains three other Soul Screamers stories, each of which is near to my heart. “Fearless” was Sabine’s first appearance in the Soul Screamers world. I wrote it before I wrote
My Soul to Steal,
as a way to get to know Sabine as a character, and so that readers could see her from her own point of view before they saw her through Kaylee’s less flattering viewpoint. Sabine was fun to write from her very first line of dialogue. “Niederwald” was a chance to pair Sabine and Emma on a road trip, and their adventure features more of Sabine’s verbal sparring and gives Emma a chance to play hero.

“Last Request” is a brand-new story set between the second-to-last and the last chapters of
With All My Soul.
The story alternates between Tod’s point of view and—for the first time—Nash’s as they try to grant the last request Kaylee never had a chance to ask for. If the end of the story makes you cry, I recommend rereading the last chapter of
With All My Soul
for a pick-me-up.

Since this omnibus is the very last Soul Screamers installment, I would like to thank you all, dear readers, for coming on this journey with Kaylee, and with me. This would not have been possible without you.

With All My Soul

WITH ALL MY SOUL

Ending any series is hard. Ending
this
series has been particularly hard for me, both creatively and emotionally. I’ve been working with Kaylee and her friends and family since January 2008. We’ve been through seven novels, two anthology short stories and several novellas together. Kaylee and the gang have lived in three different houses with me, in three different states. I’ve spent more time in the Soul Screamers world than in either of my adult series to date.

Saying goodbye has been bittersweet. But Kaylee has grown up, and I’ve grown up a little bit with her, I think.

This book is dedicated to Kaylee, who’s suffered through so much for our entertainment. She’s been a good sport—a fighter to the end—and it has been my pleasure to finally give her the happy ending she deserves. (Don’t peek! I promise, you’ll hate yourself for it later….)

This book is dedicated to every reader who’s ever written to ask me for a release date, a spoiler or a snippet of the text. My words may have brought Kaylee to life, but your interest kept her going.

I used to hate the fact that my world is built on half-truths, held together with white lies. My life itself is an illusion requiring constant effort to maintain. I lie better than almost anyone I’ve ever met. But if I know the truth about anything, it’s this: when people say the devil is in the details, they have no idea how right they are....

“It was a nice service, right?” My best friend, Emma, smoothed the front of her simple black dress, both brows furrowed in doubt. She shifted her weight to her right foot and her heel sank half an inch into the soft ground. “I mean, as far as funerals go, it could have been worse. People cried.” She shrugged, staring out at the slowly departing crowd. “This would have been awkward if no one had cried.”

It was awkward anyway. Funerals are always awkward, especially in my social circle, where the definition of “death” is under constant reevaluation.

“It was a lovely service, Em.” I watched as people fled the open grave in slow-motion retreat, eager to be gone but reluctant to let it show. There were teachers, shell-shocked but in control, looking out of place without their desks and whiteboards. Parents, looking helpless and scared. Classmates in dark dresses, black slacks, and uncomfortable shoes, most in the same clothes they’d worn to the past few funerals.

We were all much too familiar with the routine by now. Whispered names and details. A day off for mourning. Excused absences for the viewing. Counselors on call for grieving students during every class period. And finally, the funeral, where we said goodbye to yet another classmate most of us had known for most of our lives.

I was one of those who’d cried, even though I was among the few who knew that the star of the show—the recently deceased herself—was actually still with us. Right next to me, in fact. A guest at her own funeral.

Sabine leaned closer, Nash’s hand clasped in her right one, because her left was still encased in a cast. A curtain of thick, dark hair fell over half her face, shielding her from most of the thinning crowd. “So, seeing yourself in a coffin wasn’t awkward? ’Cause it was awkward for me, and I’m not the one being buried today.”

“Oh, no, the viewing was totally horrible,” Em admitted, her brown eyes wide. Those eyes were all that was left of her, other than her soul. Everything else was Lydia’s. Thin, angular face. Petite bones and slim build, similar to my own. Limp brown hair. Freckles. Feet that didn’t quite fit into Em’s favorite pair of shoes, stolen from her own closet while her mother and sisters shopped for her casket. “But the funeral itself—that was nice, don’t you think?”

It was, as it damn well should have been. Em had left funeral details—in her own handwriting—in an envelope on her vanity table the day we’d picked up her shoes and a few other essentials. Once Ms. Marshall was thinking clearly, she’d probably wonder why her seventeen-year-old daughter had given so much thought to how she wanted to be buried, but grief had eclipsed her skepticism at least long enough to arrange the funeral of her daughter’s—albeit morbid—dreams.

“It was beautiful, Em,” Tod whispered, and I glanced up to find him standing next to me, where there’d been only damp grass a second before. It took more self-control than I’d known I had to keep from throwing my arms around him and trying to melt into him, which had recently replaced hoping for world peace as my new favorite impossible task.

I couldn’t throw myself at him because most people couldn’t see him. Reapers are sneaky that way.

Beyond that, I couldn’t indulge in an embrace from my boyfriend—that word felt so inadequate—because today wasn’t about comforting me. It was about burying Emma. Being there for her.

And planning vengeance. Justice for Em and for everyone else Avari and his fellow hellions had possessed, tortured, or taken from us. Today was about plotting retribution for Emma’s boyfriend. And for Lydia, and for Sabine’s foster mother, and for Brant, Nash’s baseball teammate.