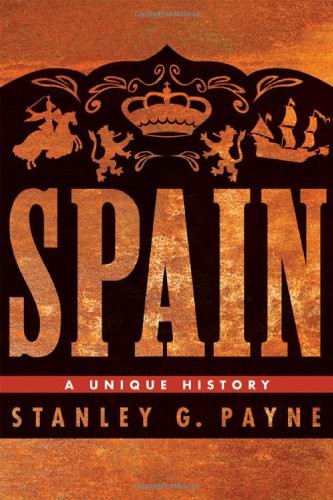 THE UNIVERSITY OF WISCONSIN PRESS

Publication of this volume has been made possible, in part, through support from
the Program for Cultural Cooperation between Spain's Ministry of Culture and United States Universities

To the memory of Francisco Javier de Lizarza Inda (1928-2007), most loyal of friends

Introduction: The Image of Spain

Part I The Formation of a Hispanist

Part II A Reading of the History of Spain

2 Spain and Islam: The Myth of Al-Andalus

3 Reconquest and Crusade: A "Spanish Ideology"?

4 Spain and the West

8 The Problem of Spanish Liberalism

11 Moscow and Madrid: A Controversial Relationship

14 Francisco Franco: Fascist Monster or Savior of the Fatherland?

15 In the Shadow of the Military

16 Controversies over History in Contemporary Spain

The Hispanic Peninsula in 800

The Hispanic Peninsula in 1300

Abbreviations
Introduction
The Image of Spain

All history is specific and singular, and therefore in key respects unique. Though certain similarities may be observed, all history is also in some sense "different," just as all human beings have many things in common yet in every case remain different individuals. At a certain level of comparison and abstraction many common factors and characteristics maybe identified in the histories of diverse countries, yet the history of every land also remains individual and in important ways different from all others.

Some histories have seemed more singular, more different from the supposed norm, than others, and in western Europe the history of Spain has for several centuries been considered the most unique. What has often been called "the problem of Spain" first emerged in the seventeenth century with the decline in military and economic power, accompanied by an early failure in "modernization," even though issues of unity and stability were resolved in terms of maintaining the status quo. After the great work of Juan de Mariana was published in 1602, Spaniards virtually ceased to write general histories of Spain, an activity that became increasingly the work of French and British authors during the eighteenth century. Foreign historians tended to see Spain's history as different from the supposed western European norm and also as problematic. Although the nationalist historiography of the nineteenth and twentieth centuries claimed to resolve the problems, many have not agreed. Claudio Sánchez Albornoz, for example, was one of the greatest Spanish medievalists during the twentieth century. He lived half his life as a Republican émigré in Buenos Aires, but he was also a practicing Catholic and ardent Spanish patriot. When he published a massive two-volume interpretation of his nation's history in 1956, he titled it
España, un enigma histórico
.

Attitudes toward major aspects of Spanish history have generally been more negative and critical than to any other west European country. This begins with the evaluation of the Visigoths, often seen as divided, inept, and quickly decadent. The medieval kingdoms have been viewed as peripheral and backward, the Reconquest as dubious, conflictive, and long delayed. While the relative tolerance of a large and thriving Jewish community in the Middle Ages might have earned Spain good marks, the Inquisition and the subsequent expulsion brought opprobrium. The use of Habsburg military power and the terms of the conquest of America generated widespread criticism, while the seventeenth-century decline was soon seen as the most classic case of "decadence" since the fall of Rome. From that time on Spain has been viewed in varying ways as a special "problem," defined in varying terms-and sometimes with regard to quite different issues-from the seventeenth century to the present.

This was less the case during the Middle Ages when Spain was perceived as a normal and regular, if geographically peripheral, part of Latin Christendom. The popularity of the pilgrimage to Santiago de Compostela rivaled that of Rome, while the struggle against the Muslims sometimes took an international character, as foreign crusaders and adventurers intermittently flocked to the peninsula. In the later Middle Ages Italian merchants increasingly found commerce and finance in Spain to be lucrative, while the crowns of Aragon and Castile played normal roles in the west Mediterranean and west European international systems.

The sixteenth century was characterized by a growth in Spanish prestige, somewhat counterbalanced by the steep rise in criticism and denunciation that Julián Juderías would baptize four centuries later as the Black Legend. Diplomatic and military prestige was very high, soon to be accompanied by cultural influence. Castilian became an international language, and by the beginning of the seventeenth century Spanish literature was widely read abroad, either in Castilian or in translation. Spain was a religious leader as well, along with Italy playing one of the dominant roles in the Counter-Reformation. Classic Spanish religious writings in theology and philosophy, such as those of Francisco Suárez or Luis de Granada, would sometimes be read extensively, even in Protestant countries, into the eighteenth century.

During the late sixteenth century, a dual image of Spain developed. On the one hand was respect for the empire and for the monarchy's military power (strongly tinged with fear), accompanied by respect for its literary and intellectual culture, all the while coexisting with the Black Legend stereotype of cruelty, fanaticism, and lust for power and destruction. As military power declined, negative stereotypes increased, though their content began to change.

To be sure, west Europeans had found Spain an exotic place even in the fifteenth century, with an oriental touch in so far as it was the only western land where sizable numbers of Jews and Muslims might be found. As travel increased during the sixteenth and seventeenth centuries, visitors, especially those from France, left an increasing number of accounts. They could not get used to smaller portions of food, the absence of beer and butter, the heavy use of garlic, olive oil, and saffron. Xenophobia was common throughout Europe, but the Spanish seemed more xenophobic than most. Arrogance was the quality most commented on about Spaniards both at home and abroad, while visitors were also taken aback by the egalitarian manners of the lower classes, finding that beggars insisted on being addressed as "señor" and requested almsgivers to remove their hats when providing charity.
1