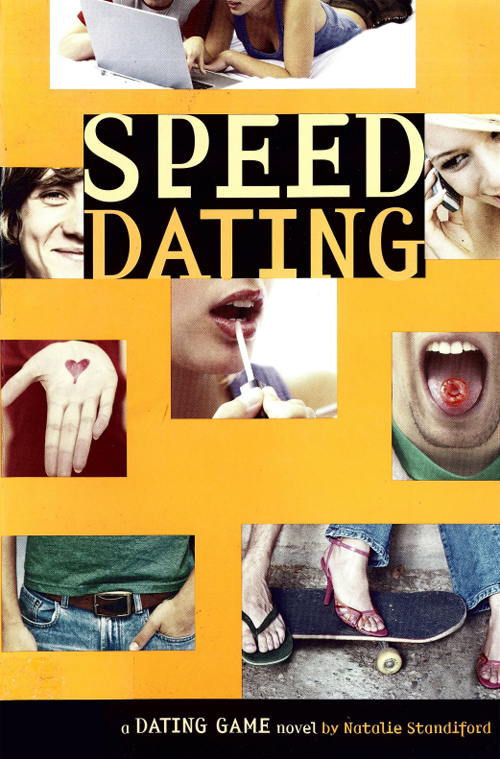 7. A Message from Speed Racer

12. By the Light of the Neon Milk Shake

13. The News from Lake Hobegone

16. The God of Sexy Moments Has a Laugh Mads’ Expense

Here’s a sneak peek at The Dating Game #6

From: your daily horoscope

HERE IS TODAY’S HOROSCOPE: CAPRICORN: Cheer up! Your suffering will end soon. Then it will come back. Then it will
go away again… and come back again….

H
olly Anderson pressed an icy wash cloth over her eyes—her mother’s never-fail de-puffing trick. When the doorbell rang she
quickly stashed the cloth in the freezer. Lina and Mads had arrived to cheer her up. Even though they were her best friends,
Holly didn’t like to look as if she’d been crying.

“He’s not exactly little,” Holly said. They were talking about Rob Safran, Holly’s boyfriend—ex-boyfriend—who was tall and
swim-team-muscular. Heart-meltingly so.

“Okay,” Mads said. “That big, weird-haired dork. With Frankenstein feet. I always thought his hair looked like it was sewn
onto his scalp.”

“Now
you tell me,” Holly said. Rob’s hair was so thick, it looked like teddy bear fur. Unlike Mads (news to Holly), Holly had always
loved his hair. Uh-oh… tears coming on. Holly pinched her forearm to suppress them. Once they started coming, they were hard
to stop.

“We’re sympathy-trashing him,” Lina said. “For your sake. Doesn’t it make you feel better?”

“You should go online and X-Rate him right now,” Mads said. “Really give it to him, so no girl will want to come within five
miles of him. He won’t get another girlfriend until college!”

“That’s abusing the system,” Holly said. Not that she hadn’t been tempted. X-Rating was a feature on the girls’ Web blog,
the Dating Game, where kids from their school rated their ex-boyfriends and ex-girlfriends. “And, anyway, Rob doesn’t deserve
it. I don’t think. I haven’t quite sorted out my feelings yet.”

She caught a glimpse of herself in the shiny aluminum lid of a pot. The lid distorted her features, but even correcting for
that, she looked terrible. Her big blue eyes were still red and puffy, in spite of her mother’s trick, and her long blond
hair was matted and tangled. Mads and Lina had to have noticed she was upset. She pushed the lid away.

Mads reached into a shopping bag and pulled out three pints of ice cream. “Let’s get down to business. We’ve got Strawberry-Banana
Happiness-in-a-Tub, Mint-Chocolate Love-Substitute, and Intense Chocolate Brainwash, to chocolatize your troubles away.”

“These ice-cream names are really getting out of hand,” Holly said. “I mean, we all know what ice cream is for. Do they have
to spell it out?”

Lina plopped her grocery bag on Holly’s kitchen island. “I’ve got cheese popcorn, Cheez Doodles, and Wheat Thins, in case
you get a salt jones,” she said.

“I’ll start with the hard stuff,” Holly said, reaching for the Chocolate Brainwash. “Thanks for coming over, you guys. I was
almost on the verge of tears there, for a minute.”

“The
verge
of tears?” Mads picked up a soggy pile of used Kleenex and tossed it in the trash.

“You heard me.” Holly was playing the tough guy, though she knew Mads and Lina saw through it.

“I still can’t believe he dumped you,” Lina said. “After all you went through with him! After he begged you to be in his sister’s
wedding—”

“—and she made you wear that heinous bridesmaid’s dress—” Mads said.

“—and you practically planned the whole thing for her,” Lina said.

“Not to mention all the swim meets you went to,” Mads said. “We
all
went to. Screaming for him like a bunch of cheer-bots.”

“Rob should be shunned for this,” Lina said. “Ostracized from the community. Like the Amish do when somebody breaks the rules.”

“Well, he said he was so busy with swimming—”

“—and studying for the SATs—”

“—and dealing with his parents’ divorce—”

“—that he doesn’t have time to be in a relationship right now,” Holly finished.

“Yeah? Well, who doesn’t have to deal with school and activities and parental insanity?” Mads said. “We’re all busy.”

“You have to make time for love,” Lina said.

“Well, that’s what he told me,” Holly said. “He said, ‘You’re a cool girl, I’m really into you, we’ve had fun, but I don’t
think I can spend as much time with you as you’d like, so maybe we should be friends.’ Then he played this old Bob Dylan song
I used to hear at his father’s house. You know, the one that goes, ‘No, no, no, it ain’t me, babe,/it ain’t me you’re looking
for, babe’?”

“It was a total shock.” Holly’s tough-guy act was breaking down. She was getting teary again. She didn’t have the strength
to stop it. “I never saw it coming. I thought everything was fine. I thought we were in love!”

She started full-on crying. It was the surprise that bothered her the most. She’d thought she had everything under control.
Then Rob pulled the rug out from under her. That scared her. If it could happen once, it could happen again. And again and
again. How could she protect herself?

Mads and Lina hugged her. Mads passed her a handful of Kleenex. “You’ll be okay,” Lina said.

“You’re better off without him,” Mads said.

“We should write a quiz about this,” Mads said. “You know, like, ‘What are the signs you’re about to get dumped?”’

“No, she’s right,” Holly said. “It happens all the time. We should warn others.”

Holly, Lina, and Mads’ school blog, the Dating Game, featured love quizzes, matchmaking questionnaires, advice columns, and
anything else they felt like putting on it. By now it was practically an institution at their school, the Rosewood School
for Alternative Gifted Education, otherwise known as RSAGE.

“You know what you need?” Mads said. “New blood. Nothing helps you forget a guy like another guy.”

“You’re just sick of
Rob,
“ Mads said. “He represents all guys to you. But he’s just a lower form of guy. There are higher forms to be found.”

“Please,” Holly said. “What percentage of the total male population could be a higher life-form? It must be tiny, like two
percent.”

“All right, if you want to be optimistic,” Holly said. “Five percent. So out of all the guys at RSAGE, there are maybe—
maybe
—twenty good ones. And at least two of them are taken—by you.” Lina and Mads were both enjoying happy times with their new
boyfriends, Walker Moore and Stephen Costello. “What are the chances that I’m going to bond with one of the few higher life-forms
left?”

“You could date outside of school,” Mads said. “That gives you much better chances.”

“But how will I meet a guy who doesn’t go to our school?” Holly asked. “And even if I meet someone, it takes time to figure
out if I like him and he likes me and if he’s a decent person or if he’s got bodies buried in his backyard… .” She dropped
her head on the kitchen counter and moaned. “I’m doomed. I’ll never have another boyfriend as long as I live! The odds are
just too low!”

“That’s ridiculous,” Lina said. “It feels that way now, but you’ll find a new guy before you know it.”

“What if we speed things up?” Mads said. “Like, what if you could meet twenty guys at once? Wouldn’t it be great if you could
go to a party and every guy there was available? And you could spend the whole party flirting and talking and by the time
it was over, all you had to do was choose one?”

“Sure it would,” Holly said. “I’d also like to be Prince William’s girlfriend, but it’s not going to happen.”

“Don’t say that!” Mads cried. “I need my illusions. I’m still clinging to that one.”

“Mads is onto something,” Lina said. “We could hold our own party, singles only. They can casually see how they like each
other without having to go on a million blind dates. And they won’t have to worry that they’re wasting time flirting with
people who are already taken.”

“Speed Dating!” Mads said. “We’ll give you a certain amount of time—five or six minutes—to talk to each guy, and by the end
of the party you’ll get matched with the one you like best.”

“Who also likes you,” Lina said.

“I guess it could be fun,” Holly said.

“We’ll open it up to kids from other schools,” Mads said. “You’re bound to meet a new guy that way.”

“And if you don’t, we’ll just keep having parties until you find The One,” Lina said. “It’s perfect for busy students. It
will only take an hour or two a week.”

“Let’s do it.” Holly straightened up, some of her old moxie returning. The memory of Rob’s teddy-bear head, which had been
making her cry all morning, was fading already. “Even if I don’t meet a guy right away, it would be
fun to make some friends at other schools. The RSAGE social scene could use some new life. New parties! New people! All right!”

“I was getting kind of sick of Rob anyway,” Holly said. “I just didn’t realize it.”

“You’re a quick healer. I guess we won’t be needing this anymore.” Lina started putting the ice cream in the freezer.

“Hey, where are you going with that?” Holly said. “I may be on the mend, but the doctor says I need to keep taking my medicine
until I’m one hundred percent cured. Right, Doctor?” She looked at Mads, the Bringer of Ice Cream.

QUIZ: IS HE GOING TO BREAK UP WITH YOU?

Is the end near? Do you know the signs?

Take this quiz and see which direction your relationship is headed.