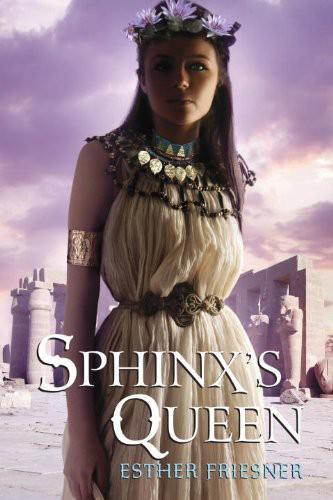 For the Trullis
,
family and friends

PART I: THE VALLEY OF THE KINGS

Chapter 2 The Land of the Dead

Chapter 4 The Face of Set

Chapter 5 The Hunters and the Hunted

Chapter 6 The Servants of Bast

Chapter 7 A Prince in Dendera

Chapter 10 The Voice of Ma’at

Chapter 13 The Builders of Walls

Chapter 14 The Hound and the Gazelle

Chapter 15 The Horizon of Heaven

Chapter 16 The Book of the Dead 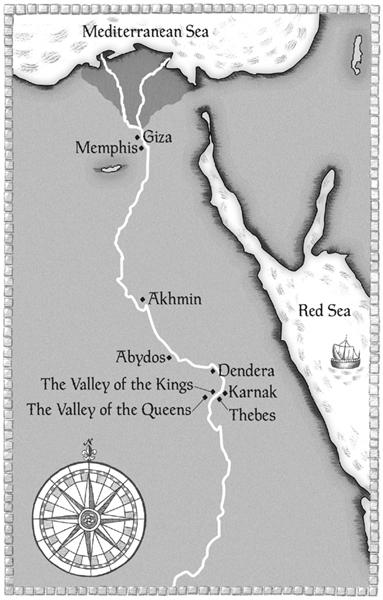 I walked in moonlight beside the sacred river, the sweet earth of the Black Land beneath my bare feet. It was still warm from the heat of the day, and the full moon lit my path. I turned my head and looked all around, but I couldn’t recognize where I was. All I could see was the river to my right and a row of hills in the distance to my left, rising out of the sand. There were no cities, no lone houses, no plowed fields, no beasts or birds or insects, no sign of any life but mine.

Still a voice was there, calling and calling my name. Every syllable echoed in my ears and pulsed through my body:
Nefertiti … Nefertiti …

It came from everywhere and nowhere, from the river, from the earth, from the hills that had grown into mountains. It filled the sky and made the moon shiver. It shook my bones.

And yet—how strange!—I was not afraid. I knew that voice. When I looked down at my feet, I saw that the path I was taking was already marked by the prints of a lion’s paws. And not just any lion, no! What ordinary lion could leave footprints so big that it took three of my own strides to cross just one of those paw marks in the sand?

I knew who was calling me, and I broke into a run, eager to overtake him, find him, greet him with a joyful smile.

I don’t know how long I ran. There was no way to tell how far I’d gone, no matter how fast my legs pumped and my heart thudded in my chest. Though my feet throbbed and my legs ached, though sweat stung my eyes and I gasped for breath, I might as well have been running in place. The moon and the hills and the river and I were like the work of an artist’s hand, carved and colored on a temple wall, forever caught in the net of a single moment. Yet even though running seemed to take me nowhere, I somehow knew that I didn’t dare stop.

Faster, Nefertiti! Faster, or you’ll be caught again!
The voice resounded through the night.
Only I can protect you! Only I can save you! Hurry, I am waiting. I am calling. I am here!

And just like that, the world around me changed. Suddenly I found myself in the heart of a grove of palm trees, their thick green crowns heavy with ripe red dates. They towered over me, a hot wind rustling through their fronds. My stomach rumbled with hunger for the fruit that hung so far out of my reach, but all I could do was sigh.

Yet when I stretched out my hands in a weak gesture of longing, they were filled with sweet, sticky dates. So delicious! I savored every mouthful as I walked through the enchanted grove of palms.

The last bite was halfway to my lips when I saw him. He crouched in the shifting moonlit shadows, a mighty lion’s body, a noble man’s serene and handsome face. The Great Sphinx stared at me with burning golden eyes, and though his lips never moved and his tranquil expression never altered, I heard him speak my name:

I fell to my knees and stretched out my arms toward him, bowing so low that my forehead touched the earth. When I was very small, my dreams had been haunted by monstrous lions who chased me mercilessly. They always caught me, and in the moment before they devoured me, their faces changed. They became the faces of men, but men whose mouths hid the terrifying fangs of lions.

The nightmares ended when I finally told Father the reason why I always woke up screaming. That was when he told me the story of my birth, so far down the sacred river, so distant from our home in Akhmin. My mother served Queen Tiye, and when the queen traveled north, so did she, even though she was about to have a baby. Queen Tiye—Aunt Tiye, my father’s sister—was used to being obeyed.

So I was born where the wondrous pyramid tombs of ancient pharaohs cast their shadows over the land and where the Great Sphinx gazed across the sacred river, his eyes forever watching the horizon for the sun-god Ra’s return each dawn. But I met my first dawn in Father’s arms as he implored the spirit of the Great Sphinx to be my guardian and my protector, because my mother was gone and because I think Father was afraid that I might follow her into the realm of Osiris, god and king of the dead.

Now I slowly raised my face from the earth and sat back on my heels as I looked at the Great Sphinx. I frowned. Something wasn’t right. A small, uneasy feeling nibbled like a mouse in the pit of my stomach. I sat very still, but inside I was shaking. “Here I am,” I said softly, trying to keep my voice steady. I wasn’t used to being brave. “Why have you summoned me?”

To rescue you, my daughter
. The answer rasped through the air between us like the hiss of a cobra’s slithering scales.
To protect you from the one who wants to see you dead. Come nearer. See what lies between my paws. It will save you, and then you can go home
.

I peered at the Great Sphinx, but I could see nothing between his mighty forepaws—only shadows and more shadows. I stood up and took a step forward, then another. The small hairs at the back of my neck prickled. I heard a strange humming in my ears, high and thin and frantic, as if some bodiless being was trying to reach me with a warning. My lips were very dry and covered with sand so fine it was dust. The sweet taste of dates had turned sour in my mouth. When I glanced at my hands, I saw that they were stained red.

Why do you hesitate?
The Great Sphinx’s voice sounded different, weaker. It reminded me of a spoiled child, whining if someone dared to tell him no.
Why won’t you do as I say? Why do you disobey me when I am the only hope you have of escape
,
of life? How can you doubt me? Why don’t you trust me with all your heart?

Why would you ask such questions?
I thought, looking up into that hard, carved face more intently.
Why, unless there’s something about you that you know I shouldn’t trust?

Nefertiti … Nefertiti …
The Great Sphinx crooned my name in a voice that dripped with false love, thick and too sickeningly sweet to stomach.
If you don’t come closer, how will you ever be able to receive the gift I have for you? Draw near and see how good I am to you, beautiful one! Come, my treasure, my prize, come…
.

Something stirred between the Great Sphinx’s paws. I saw a glint of gold in the darkness, and then a lithe, elegant shape stepped into the light on dainty feet. Tail held high, a glittering collar around her neck, the royal cat called Ta-Miu left a trail of little paw prints like golden flowers in the sand. The star-shaped patch of white fur on her brow shone with mysterious light.

“Ta-Miu, you’re alive!” I clapped my hands with joy. “Gracious Isis be thanked.”

How dare you thank Isis?
The Great Sphinx’s voice was suddenly strong again, roaring his rage.
Ungrateful girl, you should thank
me!
Me and
only
me!
He scowled, and the sandstorm-pitted surface of his face cracked like a dry streambed, hard flakes scattering everywhere. A second face began to emerge from what was no more than a thin shell of stone.
Your life depends on whether this creature is alive or dead! Have you forgotten that you were the one accused of killing her? That to kill one of the goddess Bast’s own children is blasphemy, a crime that
carries the supreme penalty? Her blood is the ransom for your own! Thankless, treacherous girl, don’t you know that I have the power of life or death over you? Still you repay my gracious kindness to you with a thousand betrayals!