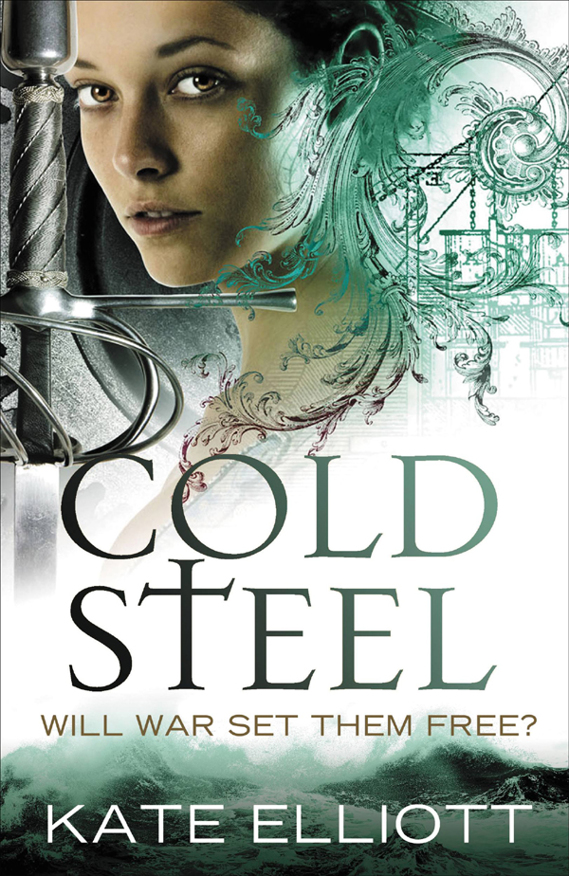 A Preview of
The Iron Wyrm Affair

To the women who in one way or another supported me
through an immensely difficult drafting process.
This book is dedicated to you, sisters all.

To quote writer Tricia Sullivan: We have to press on.

Katharine Kerr suffered through more versions, false starts, detours, and backtracks
than I really have a right to inflict on anyone. This book could not have been written
without her patient encouragement.

As always, my spouse, Jay Silverstein, did his best to support me through a grueling
writing process. Thanks also to my children, Rhiannon, Alexander, and David, for sharing
the initial inspiration with me and letting me run with it.

The Spiritwalker books take place on a different Earth, with magic. This is a fantasia
of an Earth that might have been had conditions included an extended Ice Age, the
intelligent descendants of troodons, nested planes of interleaved worlds, and human
access to magical forces that can either reverse or accelerate the normal flow of
entropy.

Almost all the names and words used are real, not made up. Most of the place-names
are, when possible, based on actual names used at one time or another in the history
of the various regions. Geographical differences from our own world reflect the extended
Ice Age, which would have locked up enough water in the ice sheets to cause the sea
levels to drop, as they were in the Late Quaternary and Early Holocene in our time
line. Doggerland is the English name for the region that is now beneath the North
Sea but was, in our Mesolithic, a land bridge between Britain and the European continent.
Naturally, because of these things, history flowed down different tributaries in the
Spiritwalker world.

The “Roman” days of the week commonly used in this world are Sunday, Moonday, Marsday,
Mercuriday, Jovesday, Venerday, and Saturnday. The months are close enough to our
own that they don’t need translating. From the Celtic tradition, I’ve used the “cross-quarter
days” of Samhain (November 1), Imbolc (February 2), Beltain (May 1), and Lughnasad
(August 2), although it’s unlikely Samhain was considered the turn of the year.

I was serving drinks to the customers at the boardinghouse when a prince came to kill
me.

I had my back to the gate and had just set a tray of empty mugs on the bar when the
cheerful buzz of conversation abruptly ceased. Behind the counter, Uncle Joe finished
drawing a pitcher of ale from a barrel before he turned. His gaze widened as he took
in the sight behind me. He reached under the counter and set my sheathed sword next
to the tray, in plain view.

As with most family compounds in the city of Expedition, the boardinghouse’s rooms
and living quarters were laid out around a central courtyard. A wall and gate separated
the living area from the street. Soldiers stood in the open gate, surrounding the
man who intended to be the next ruler of the Taino kingdom.

Prince Caonabo had a broad, brown face, and his black hair was almost as long as mine,
although his fell loose while I confined mine in a braid whose tip brushed my hips.
He wore white cotton cloth draped around his body much like a Roman toga, and simple
leather sandals. Had I doubted his rank because of the plainness of his dress, I might
have guessed his importance from the gold torc and gold armbands he wore, as well
as the shell wrist-guards and anklets that ornamented his limbs and the jade-stone
piercing the skin just above his chin.

The prince raised a hand, palm up. A flame sparked from the center of his palm, flowering
outward as a rose blooms.

“Catherine Bell Barahal, you have been accused in the council hall of Expedition of
being responsible for the death of the honorable and
most wise
cacica
, what you call a queen, she with the name Anacaona. As Queen Anacaona’s only surviving
son, and as heir to her brother, the
cacique
, I am required to pursue justice in this matter.”

I met his gaze. “I would like to know who made that accusation.”

“I made the accusation.”

He knew what I had done.

I took a step back, but I could not move faster than magic. Warmth tingled across
my skin as the backlash of his fire magic brushed across my skin and stirred heat
within my lungs and heart.

Yet as the light of the growing flame shimmered across his face, his features melted
quite startlingly, like candle wax. He was as poured into a new mold and began to
transform into a different person. I had not known that fire mages were skilled in
the art of illusion, able to make themselves appear as someone else! Even the bar
and courtyard were cunningly wrought illusions that, like his face and body, dissolved
into mist. A gritty smoke filled my lungs, choking me.

Leaping back, I grabbed for my sword, but before I could grasp the hilt, my hand burst
into flame. A blast of hot wind dispersed the stinging veil of smoke. As my vision
cleared, I found myself standing on grand stone steps that led up to the imposing
entry of a palatial building. Its walls and roof blazed. Sheets of fire crackled into
the air like the vast wings of a molten dragon. Flames clawed searing daggers into
my flesh as I groped for my sword. I had no cold magic with which to kill the inferno.
Only if I could wield cold steel had I a chance to save myself.

My fingers closed over the smooth hilt. I tugged, but the blade stuck in its sheath.
An icy wind poured down in gouts of freezing air that battered against the raging
flames, as if fire and ice were at war and I was at the center of the battle. The
flames shimmered from gold to white, and in the blink of an eye the fire transmuted
to become falling snow. Brushing away the snowflakes icing my eyes and lips, I tried
to make sense of what had happened.

Where was I? Why was everything changing so fast? Was I dreaming?

Instead of a burning building, the sheer cliff face of an ice sheet loomed over me.
The pressure of its glacial mass slowly advanced, grinding and groaning. I pulled
on my sword, but the blade was crushed in the ice and my hand had frozen to it. I
simply could not move.

Beyond my frozen body lay a hollow cavern that bloomed with the harsh glamour of cold
fire. In that lofty cave, the melted form that had first appeared to me as Prince
Caonabo glittered as it changed. Frost and crystals shaped themselves into the figure
and face of a man I recognized: the Master of the Wild Hunt.

His expression was as cold and empty as his heart. “So are you trapped, little cat.
You will never be free.”

Instead, the sword yanked me back the other way so hard that it hauled me right off
my feet.

“Cat! Fiery Shemesh! You are talking nonsense in your sleep and besides that trying
to drag me off the bed.”

My cousin Beatrice loomed over me, her thick black curls framing her familiar and
beloved face. Her fingers clutched mine, and I realized I had been holding her hand
for quite some time. For fifteen years, since I was orphaned at the age of six, Bee
had been my best friend, as close as a loving sister. Just to see her helped me relax
enough that I could take stock of where I was and what I was doing.

We had fallen asleep together in the drowsy afternoon heat in an upstairs room of
Aunty Djeneba’s boardinghouse.

After washing up on the jetty of the city of Expedition, on the island of Kiskeya
in the Antilles, I had come to live at the boardinghouse. Here Andevai Diarisso Haranwy,
the cold mage I had been forced to marry back in Europa, had courted me and won my
heart. Bee and I were napping on the bed Andevai had built for his and my wedding
night. I shut my eyes, remembering his kisses. For a few breaths I pretended I could
hear his voice downstairs in the courtyard, as if he had just come home from the carpentry
yard where he worked. But he was gone.

You will never be free.

I sat up, trying to shake off the memory. “What a frightful nightmare I just had.
Pinch me, Bee.”

She pinched my arm with the force of iron tongs wielded by a brawny blacksmith.

I shook my arm until the pain subsided, while she laughed. “No, it’s all right. I
just wanted to make sure I’m finally awake.”

Bad Girls by Brooke Stern
The Weight of a Wing (The Stolen Wings Book 1) by Ioana Visan
The Book of Kills by Ralph McInerny
Liberty Bar by Georges Simenon
The War After Armageddon by Ralph Peters
Zombies! Episode 1 - Shawn of the Dead by Turner, Ivan
Los ojos amarillos de los cocodrilos by Katherine Pancol
The Standing Dead - Stone Dance of the Chameleon 02 by Ricardo Pinto
Conviction: The Untold Story of Putting Jodi Arias Behind Bars by Juan Martinez
No Name Lane (Howard Linskey) by Howard Linskey
Our partner