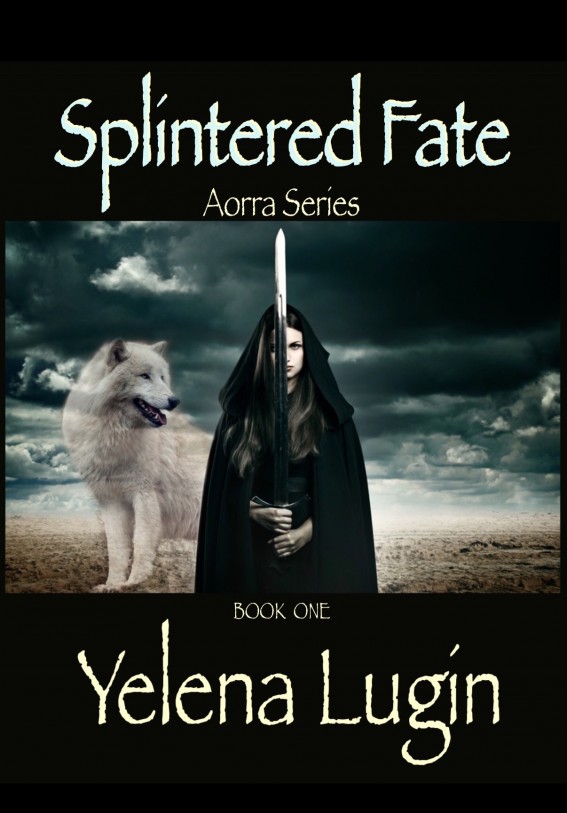 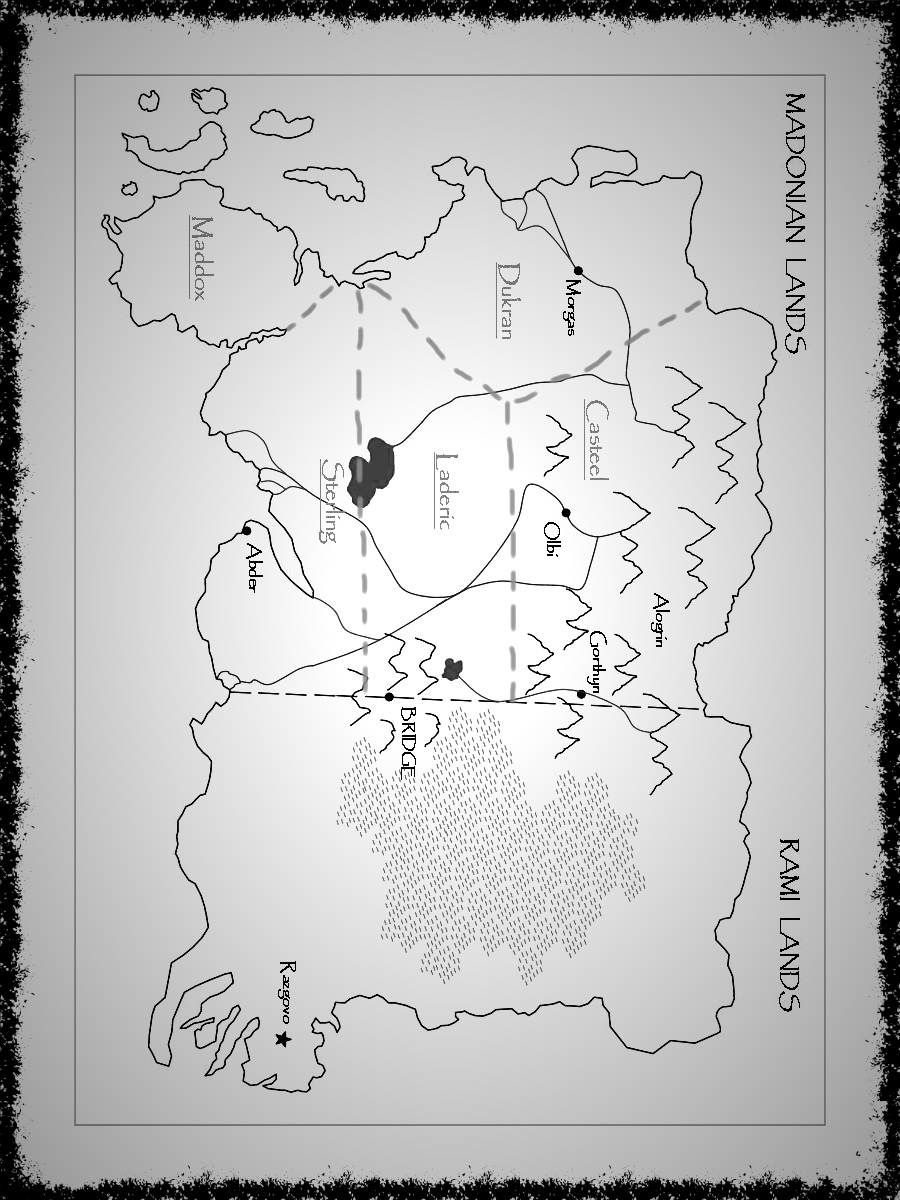 The blazing sun was cloaked by the
lush dark vegetation overhead, providing a cool shelter for the
creatures of the forest. Gigantic ancient trees covered with bright
moss and flowing vines surrounded Eveline Casteel and her men. One
would think that such growth of the vines would weaken the timeworn
trees, however, the trees seemed to endure the beautiful vermin
vines without difficulty. It was a shame that more Madonians would
not witness this vast ancient forest out of fear of its proximity
to the border.

Eveline fingered the bark of an old tree while
following the course of a vine with little purple flowers along its
length. The sweet honey scent of the flowers filled her lungs with
every breath. She adored these lands and the small little town of
Gorthyn that was nestled within. This was her original home and
where only brave Madonians lived.

The Madonian and Rami were ancient
races; each had unique gifts setting the two apart. In the
forgotten times of the past the races used to cohabitate and work
together, living together in harmony under the rule of a great
king. But those times had long been forgotten. Years ago a bloody
war waged by anger and jealousy of a few, ended with the division
of the lands. Now each race lived apart from the other, filled with
fear and hatred of the other.

The town of Gorthyn never had any problems
with the Rami people despite its location. The town was small in
size, well nestled in between the mountains, and under protection
of tree cover causing it to be easily hidden from any threat. Still
people from outside towns were troubled by the proximity to the
Rami and very few ventured into the town, or the wilderness that
surrounded it. Eveline always thought it a true shame that such a
majestic place would go unappreciated by so many.

A small break in the canopy above allowed for
a ray of light to touch a patch of moss on the ground and from the
center of the patch grew golden chanterelles. Eyeing the golden
patch, Eveline reached down and picked the mushrooms that the
forest seemed to courteously point out and tossed them in an
already filled brown leather bag that hung from her shoulder. She
turned to Victor, her personal bodyguard, and indicated that they
make the hike back to Gorthyn, pleased with the amount of
chanterelles she had been able to collect.

Victor was a tall man with strong broad
shoulders and a weathered face accented with deep hazel eyes. He
was an older man with a strong silent wisdom that flowed through
him, more than making up for his lack of youth and vitality. Victor
and Eveline had traveled together for many years, he had given an
oath to watch over her and protect her ever since her Aorra was
taken away from her.

Aorras are mystical creatures that
took the form of an animal and were forever bonded to their person.
It was not known where exactly Aorras came from, it was simply the
way it was. Not all Madonians were gifted with an Aorra, but those
who were were truly blessed with a soul mate.

A Madonian and their Aorra had the
ability to communicate through thought. The Aorras helped to shift
the flow of energy that naturally flowed through every Madonian,
allowing their person to better wield various forms of power.
Aorras could be killed, such as Eveline’s was, for they have a
mortal form. However, if they were allowed to live in peace that an
Aorra would only cease to exist when its Madonian did.

After Eveline’s Aorra was ripped from her life
she was forced to accept Victor as her guard. He would lay down his
life for hers. She hadn’t liked the man much at first, finding his
constant silent presence a little unnerving. She hated that he was
willing to take such an oath for her, someone he didn’t even know.
However, as time went on she had learned to understand Victor. His
silent presence became a welcomed one, and over the years they had
built a strong friendship.

“
It’s beautiful here, don’t you
think?” Eveline casually spoke to Victor as they began their walk
back to Gorthyn.

“
I guess, if you find thrill in
wandering about deadly and dangerous woods… Though I find it
senseless, if you ask me.” Victor replied, keeping his guarded
hazel-eyed gaze on the surrounding forest.

Eveline rolled her green eyes before snapping
them to Victor. Her blond hair whipped around her at the sudden
turn of her head.

“
Senseless? Don’t offend the magic
of this place. I used to play in these woods when I was young;
there are no other forests quite as enchanting. Maybe you aren’t as
wise as you think you are old man, to miss the entire beauty of
it.” There was an edge to her words, laced with a hint of sarcasm
that only Victor knew was there.

As soon as Eveline entered Gorthyn
she was provided three Gorthynian guards to protect her along with
Victor during her time in the small city. The three men silently
followed behind her and Victor as they strolled through the woods.
The guards shifted uneasily, unaccustomed to the nature of Eveline
and Victor’s relationship. They could never imagine speaking so
freely to a Council member as he did, to call her senseless. It was
not a way people would ever speak to her.

Taking notice of the tense guards
and seeing a chance to alleviate boredom Eli, Victor’s black beast
of an Aorra, took the opportunity to growl, a low and vicious
sound, in an attempt to increase their unease. As if to voice his
distaste in the councilwoman’s words towards his
Madonian.

Eli always reminded Eveline of her
husbands Aorra. He had bright jet black eyes and large ears that
stayed on point, always alert. Just like Victor, Eli was weathered
and wise. He had a distinct battle scar that wrapped around his ear
and down his right rib cage. His fur was coarse with greying edges
that only intensified the menacing look of the beast. His piercing
eyes peered back at the three guards behind as he grumbled. Eli
certainly was a fierce looking beast. If Eveline didn’t know any
better she would fear such a big wolf like creature.

It had the guards trailing behind shuffle
uneasily, one of which made the slightest yelping sound.

Victor glanced
at Eveline, even though he didn’t speak, his eyes did. And they
said,
such a brave bunch of lads you have
protecting you.
Then he released a mighty
laugh at the guards’ expense. It was a sound that was quite rare
and oddly beautiful. It boomed through his entire being and out,
spreading to all that was near. It was the most contagious
sound.

Trying her
hardest to suppress her laughter, Eveline attempted to show some
form of authority and grace in the situation. A council member, her
fierce bodyguard and a dangerous looking beast were toying with
those poor guards who had no Aorras of their own.
How inappropriate,
she
thought.

The rest of their hike was mostly
silent as Eveline took comfort in the beautiful surroundings.
Enjoying the memories of where she grew up as a child. Everything
about the woods felt right to her, from the way the earth felt
beneath her feet to the fresh scent in the air. She loved
everything about it.

Victor and Eli trailed close
behind Eveline, allowing for her to lead them through the woods.
They gave her enough room to enjoy the freedom of the forest, but
Victor never took his eyes off of her and their surroundings. The
three other guards traveled closely behind them.

Tonight was expected to be a
special night. Eveline envied her husband for being able to greet
her daughter on her arrival day, but she reveled in being able to
cook her daughter’s favorite meal. Her stomach fluttered with
excitement and anticipation. One moon cycle away was truly too long
of a time for a mother to be apart from her child, especially at
such an important time of a child’s growth.

The thoughts of their happy future
came to an abrupt end as screams ripped through the air. Coming to
an immediate stop, Eveline didn’t dare even breath, not sure if
what she had heard was real. As the air around her calmed another
horrendous scream cut through the stillness, sending a sickening
kick to her stomach. Her eyes met with Victors for only a second.
Her heart sank and she began running through the forest towards
Gorthyn.

Eli immediately took the lead,
running a few steps ahead of Eveline. The forest blurred in her
peripheral as she raced through the woods. Sudden fear seeped in
and she began chastising the false feelings of safety she had felt
only moments ago. She should have never left the town in the first
place.

Eveline had been
obligated to attend important council meetings in Gorthyn, which
originally prevented her from being able to accompany her husband
to get their daughter. She had to stay behind as a representative
of the
Selviria
n
council to overlook papers being written for the creation of a
small army quarter in Gorthyn. Of course she should have been on
high alert, especially being so close to the border. However, her
adoration for this place and comfort with the surrounding forest
caused her to misjudge the dangers lurking near by. Her feelings of
home and safety forced her poor decision.

They all ran as hard as they
could, but to Eveline it felt incredibly slow. With every passing
moment something horrible was happening to her people, she just
knew it. It was a feeling in her gut, those she swore to protect,
those who she loved were crying for help. Yet she was not there to
help for they were beyond her reach. Uselessly she pleaded for her
body to go faster.

Eveline could smell the burning of Gorthyn
before she saw it.

By the time she and the guards
broke through the forest, Gorthyn in the valley below, was ablaze.
The sight caused her to stumble back a few steps, the image sending
a kick to her gut. Mindlessly she placed a hand over her stomach as
she and her guards took in the scene.

Homes were infused with angry flames that
engulfed the wooden structures as they climbed the trees around
thirsting for more. She could hear the gruesome sounds of men,
women, and children all being viciously cut down by blue flashes.
There were snarls and howls as those with Aorras bravely fought a
losing battle. The small quaint town was now a hot blaze of fire
and lightning with columns of black smoke rising from it. It made
for a horrific scene. How could this have happened?

Feeling the
energy pulling from her core, Eveline drew it into her palm as a
simple silver dagger formed in her hand.
Could I have been any more careless
she thought, cursing herself for not even bringing something
to defend herself with.

Living Silence in Burma by Christina Fink
Before the Rain: A Memoir of Love and Revolution by Luisita Lopez Torregrosa
Curtis by Kathi S. Barton
The True American: Murder and Mercy in Texas by Anand Giridharadas
Bolitho 19 - Beyond the Reef by Alexander Kent
IN ROOM 33 by Sheedy, EC
The Armour of Achilles by Glyn Iliffe
Deliciously Debauched by the Rake by Ann Lethbridge
As High as the Heavens by Kathleen Morgan
Secrets of You by Mary Campisi
Our partner