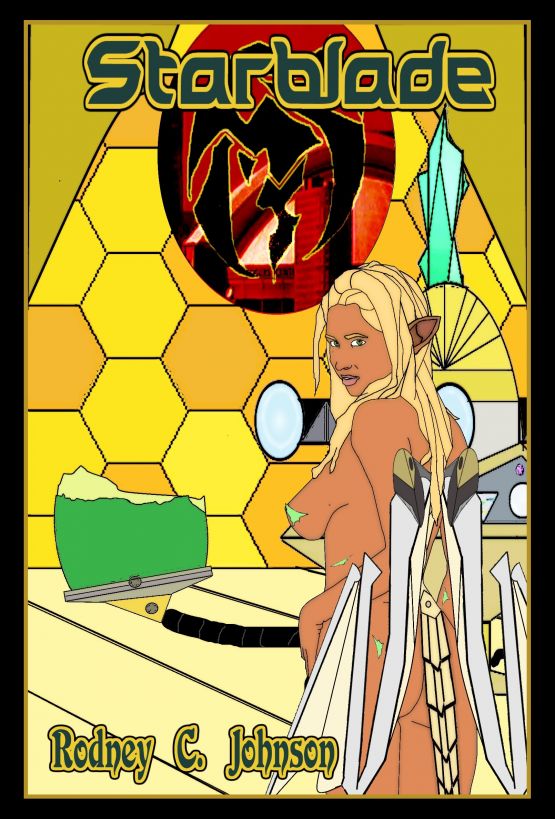 Starblade
Copyright© 2012 by
Rodney C. Johnson
and
Roadrunner Books
, a division
of
ThunderHawk Enterprises.
All Rights reserved. No part of
this book may be used or reproduced whatsoever without written
permission except in the case of brief quotations embodied in
critical articles and reviews.

Visit us on the Web:

Chapter 1. Coming Of
The Overman

I would like to thank April Previte for all
her help in cleaning up my text, not to mention the useful
feedback, as well as encouragement along the way. I also want to
thank Charlie McShane for being there to bounce plot points off of.
Sure, I usually go my own way with things, but even though he
doesn't realize it, his input is helpful to me. I want to thank my
family for understanding my need to write. It's been a long haul
getting here, but at last we've finally arrived.

Chapter 1.
Coming Of The Overman

I give you power to create life out of
lifelessness. From the Earth's clay, manufacture a woman, she who
shall be Eve to a new humanity, and become mother of
Stormangels!

A grand command chair rested on a central
platform -- a throne! From the forward part of the circular
operations deck, she shouted orders in a dialect she had never
heard before, a language that hinted at being influenced by both
German and Sanskrit, though it contained guttural “K's” and “T's”,
sounds that were not heard in any known human language. Those in
the work pit of the vessel who managed the helm and other systems
of the monstrous predatory golden bird-serpent starship obeyed her
and set a course toward her selected targets.

Over in a corkscrew rolled the large vessel,
a smooth elegant rotation that swooped around in the vast
dimensions of deep wide-open space, unencumbered by right, left or
up and down to bring its weapons to bear upon its prey.

In golden armor she had been dressed,
intricate links of ring-mail attached to plate-armor with angular
upward swept shoulder plates. Draped over her shoulder hung a rich
green cloak. On the bridge of her warship she stood, right hand on
a sword hilt with an advanced gun strapped to her thigh. She was
Doom incarnate, a War-Queen to be feared.

“
Railkir!” She shouted to her gunner
hidden in the darkness.

A shadowed red world came into view, covered
with lighted cities that flickered and gray seas which crashed
ashore. The bird-serpent let a ball of hot fire out from its belly
to absolutely flatten a city below.

On a vast rusted desert, she discovered
herself. She pushed her eyesight outward beyond the horizon where
she witnessed a flash. An eerie green light burst out from the sand
and coalesced into a column which became a winged armored figure. A
deep cowl obscured the face. The figure stood with her on the rust
strewn track. The warrior gripped a sword hilt in a gauntleted
hand. It appeared to be a shattered blade for there was but a
single spike left of the cutting edge. Three notches curved into
the spine of the fractured weapon.

Blood rushed from cracks in the desert to
form three rivers at the figure's claw boots which began to
overtake the desert. In a deluge, a river of sanguine liquid
ascended around her. Gauntleted hand raised the winged hooded one
held out its bladeless hilt from which came a gleam of light...

Frederika Gisela von Gotha woke in a jolted
cry. She gazed outside at her sprawling snow covered estate. Since
her birth, the same dream had haunted Frederika, her eidetic memory
never allowed her to forget the bird-reptile ship, or the winged
hooded figure. Five-foot, eight-inches, statuesque, and
honey-blonde Frederika got up, strode across her bedroom in a
gracious stride for her balcony. She pushed aside a strand of hair,
stared out toward the line of old dark forest, whitened by early
morning frost. The synthetic girl rubbed the back of her neck,
fingers grazed a tattoo: Two equilateral triangles' apex to apex, a
stylized hourglass, or as some might observe, a double helix.

Dawn beckoned to her on the day of her
twentieth birthday. Despite her illustrious surname, Frederika did
not know her royal parents. If they could even really be deemed
such, given her extraordinary origins. Though, in many ways she in
fact resembled the haughty woman who once had been Duchess of
Saxe-Coburg, and mistress of this estate, on who she also had been
modeled, and whose 'daughter' she was been meant to be. Not at all
surprising, given the precision which the engineer who designed
Frederika's molecular construct had for his art in replication of
the former Duchess. For that considerable effort the engineer
charged a hefty sum to use his miraculous skills to create one of
his unique lifeforms known as Morningstars. In any event, even the
threadbare mimicry of a genetic connection permitted Frederika to
be decreed Duke Magnus and Duchess Gisela von Gotha's heir. A
reality that provided the synthetic girl this duchy, and along with
it Grenadier Firearms, the weapons manufacturer which furnished
Frederika a generous income.

Back into her room Frederika went, glanced
for a heartbeat at her reflection in an etched silver vanity
mirror: Contoured emerald 'panther eyes' peered back from a heart
shaped face, slight Asian characteristics could be recognized among
those of the Teutonic. A small button nose and a single freckle
beneath her left eye, the solitary flaw on her otherwise perfectly
symmetrical features. The blemish placed there due to some quirk of
the engineer who designed her. Full and pink lush lips fashioned to
make any male go weak in the knees were made to exude sexuality.
Frederika knew she had been built to be exquisite, but her
sexuality was also a weapon intended to be wielded for the
seduction of those in power, a sexual aura enhanced by potent
pheromones.

Frederika threw aside her slinky-silk mint
green nightgown and headed for the shower. Her early morning
workout would soon begin, and she wanted to watch the launch of the
foldship,
DSV Excalibur
this afternoon.

Crescent shaped Vanguard Island shot
coral-white out of the monsoon-driven ocean. Built on a
superstructure of steel lattice, the wave barriers protected the
artificial structure from the assault of the raging sea.
Amphitheater in shape, one whole side housed rooms and a
construction area. Huge conifer trees grew on an insular island. At
Vorkrür’s center, a metropolis of towered and pyramid style
buildings arose. They glistened in the sunlight, a blended
high-tech and feudal design, cast in majestic steel-glass
architecture.

The Narshin Thryak palace complex overlooked
the central Falcanian city from atop a great stone foundation.
Domed in gold, the black citadel perched inside the curvature of
Vanguard’s famed metallic tiled road. The palace, pyramid in
structure had clear Moghul influences to be seen in its
construction as witnessed by the arched doorways and golden capped
minarets at its four corners.

Protected in the inner curve of the island,
joined to it by a short causeway rested a medium sized round
building crowned with a gold and bronze dome. In three directions
enormous mammalian-winged and armored statues stood sentinel, they
raised single-edged claw-blades upward at guard over the
tri-cameran of the Falcanian Khanate. A blood-red banner adorned
the arch of the Dreikatha's hall. A bird-serpent, ambiguous,
neither avian nor reptile held watch over the ruling constituents
of the Khanate.

“T'Saar!” Chancellor Trakan gave the
claw-on-fist salute, took in the silence that came over the hall as
the members of the tri-cameran waited for his report to the
Shotar.

Lord Sharr Khan Mingh Drakonis, keeper of
the Phoenix Heart and Falcanian Shotar sat in shadows, his face
concealed under a black cowl, his gloved fist clenched the armrest
of the Claw-Throne. The Shotar leaned against the angular backrest
of his chair. Burgundy fabric embroidered with gold threads
cushioned his back and great talon feet supported the chair.

“JR Giovanni demands you journey to his
capital, and that you speak to him personally,” the lanky bearded
Chancellor reported, aware such a response wasn’t going to be
regarded very well by Sharr Khan.

Under his cowl Sharr frowned at Chancellor
Trakan. “The Imperator thinks too much of himself, he harbors these
Budjah Monks, uses them to seed chaos.” Although the Shotar spoke
in a low voice, each of the nine members of the Dreikatha heard him
clear enough.

And the threat in his tone.

“We dare not anger the Imperium. Romulus’s
wrath scourged the Americas and conquered much of the globe. He’d
have little reservation cutting us down,” remarked a hooded figure
off to the left of Shreik Trakan.

“Perhaps not Nadia?” The Shotar pulled his
cloak closer, and stepped off the platform. Each footfall of his
tri-claw boots clacked on the black stone floor. Sharr glanced
under the velvet royal blue hood of the Valküri Sisterhood’s
Reverend Mother Superior, who also happened to be his mate.

“Romulus has achieved much since The Burn,”
Nadia murmured. “He made his country a force to be feared. Raised
his Legion from the Wastelands...”

Drakonis nodded. “Imperator Romulus shall be
dealt with soon enough.” Sharr placed a hand on Nadia's cloaked
arm. “Nor shall we permit these monks to further transgress against
us.”

“I have confidence in your decisions,” Nadia
said.

“Sharr Khan, the Budjah must be tackled,
destroyed!” Implored the blue hooded Vorjah, keeper of the holy
lamplight. “They threaten our path of Tarik.” Zoar Jangsiin
understood Falcania’s own, as well as Sharr Khan’s very own
responsibility with regard to the scarlet robed monks. The Shotar
had his reasons to handle them with care, and yet Zoar himself held
little tolerance for them.

Sharr hummed to himself. “No more than any
other religion or philosophy Zoar. We’ve our debates with Heathens
and Hindu alike. It’s less shocking that we have conflicts with
this new ‘Christian’ sect.” He turned to the head of his Tahru
caste. “The Budjah crime lay in a presumption to force their faith
on those at Aren-Zülar.”

“My caste does what’s needed to bring our
species to the stars.” Sharr did not miss the clipped response of
the Guilthari leader. “We mine hrisanar on the red planet at great
risk –”

“Drakorian are always there for your
protection.” Atar Kran, the white tonsured Shrai-Bashir, Commander
of the Imperial Drakorian Guard interrupted. “I’ve tripled the
brigades stationed at Aren-Zülar. Your workers shall not be
troubled by anyone ever again!”

“We thank you for that, my Lord. But that is
not my point.” The Guilthari Lord inched away from the Drakorian
leader who hulked over him. “The Budjah harass everyone, daily
trying to convert us.”

“That’s why I ordered the attack,” Atar
growled.

“They claim their faith brought Earth back
from the brink,” The Shotar did not disguise his ironic tone while
he walked the circle and glanced at each of the cloaked caste
representatives. “Not the advent of genetic engineering and
nanotechnology. This notion is harnessed, bolstered by Imperator
Romulus to expand his own power.”

“My Lord,” Atar once more growled, he wanted
to at long last be rid of these monks. “Budjah are wherever the
Imperium annex territory and seed the ground for the Centurions to
enter. We really should take a harder line where they show up.”

Sharr nodded. “That is true, but we will not
engage in religious persecution, Atar. Even of Erik’s little band
of high-tech monks. They are an irritation, but one we can accept
for now.” The Shotar’s display of restraint with the Budjah matter
wasn’t popular, but the Dreikatha abided by it nonetheless.

A bell chimed, a call from Vanguard Island's
command center.

“My Shotar, the
DSV Excalibur
's
launch countdown is under way.” There came a pause from the C &
C officer. “And your daughter's ship just docked.”