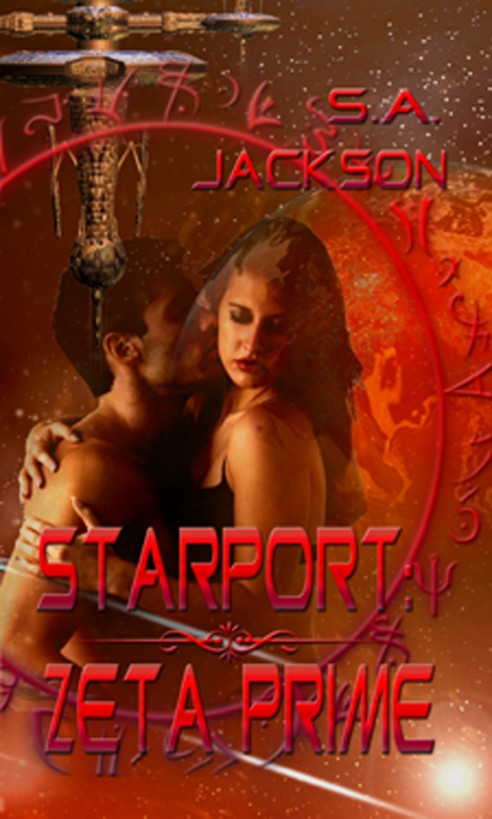 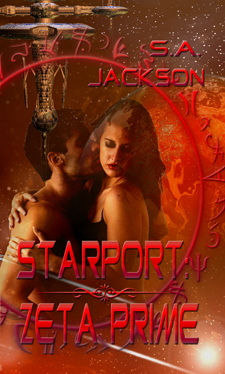 This is a work of fiction. All characters, events, and
places are of the author’s imagination and not to be confused with
fact. Any resemblance to living persons or events is merely
coincidence
.

Jillian
raced down to
the steel fence circling the perimeter of the gateway. The call on
her communication device from her second-in-command had been an
urgent ‘code yellow’. This meant military presence–which indicated
to her that there may be a threat on site.

Her
second-in-command was waiting for her by the entrance gate. She
lifted her arm to shield her eyes from the glare of the headlights
on the military land pod. There were three approaching the
construction site and their arrival had caused intrigue amongst the
workers, many stopping their duties and craning their necks to
look.

“
Mikey. Open the gate so we can check I.D.,” she instructed
the dark-skinned man beside her and then lifted the communication
device to her mouth.

“
All security,
military incoming. Stay focused on the back perimeters.”
She raised her head to see several of the gateway builders still
staring from the large mound in the center of the area.

“
And can someone locate
the foreman and tell him to get his men back to work.”

Mikey used a
magnetic fob to unlock and swing open the gate as Jillian walked
forward to greet the two soldiers who emerged from the first
pod.

“
I.D. please, gentlemen,” s
he requested. They wore the standard red and green uniform
of all soldiers–the colors made for the best camouflage against the
colors of most foliage on planet Zeta Prime–but she liked to be
thorough. As the head of security for the site, she made sure that
she knew every single person who entered the gateway side of the
fence. The men complied and flashed her identification cards with
serious expressions.

“
What’s your business here,” s
he asked the taller of the two–a shaven-headed man with a
square jaw who she had noted was named Tom?

“
You’ve found her.” She gestured to herself and made to
extend her arm in a handshake, but as she reached forward Tom
grabbed it and twisted it behind her back, pulling her other arm in
the same way.

As the shorter of the two soldiers clipped
handcuffs tightly to her wrist, she
yelped in pain at the overstretch in her shoulders. Mikey dashed
over and placed hands on the short guy.

“
Hey. Hey.
What do you
think you’re doing,” he demanded, trying to stop him securing the
cuffs?”

“
Sir. Please step away.”
Tom lifted a gun in warning and Mikey lifted his palms in
surrender, feeling hopeless for his boss but admiring the way her
face remained emotionless. Seeing her shake her head at him he
backed away slightly, knowing that she wanted him to keep out of
trouble.

“
Miss Tierney. We are arresting you for conspiring with
rebel supremists in a plot to sabotage this gateway.” Tom had
placed his gun back in the holster and proceeded to rip Jillian’s
stun gun, magnetic fob and communication handset from her solid
silver belt.

“
What?”
Jillian’s
expression finally reflected disbelief at the ludicrous allegation.
“That’s utterly ridiculous. I’m head of security here. My whole
life on this planet has been about protecting this gateway. There
has been some mistake. Let me go and we can get to the bottom of
this.” She struggled against her cuffs.

“
We’
ve been given
orders to arrest and take you in, Ma’am.” Tom motioned to his
colleague, who then placed his hand on Jillian’s back and marched
her towards the third land pod.

She twisted her
around, glimpsing a growing crowd underneath the silhouette
of the starport, their work abandoned in favor of watching this
dramatic scene.

Mikey watched,
too,
frustrated at being unable to stop this madness and resolving to
help Jillian as soon as he got more information. He attempted a
comforting smile in her direction, trying to signify to her that he
would resolve things from his end and wanting to calm the growing
concern he caught flash across her face.

Unbeknownst
to any of the humans, someone else was also watching with interest.
Hidden up high in the branches of a tree, sat Faron–one of the
cat-like people native to Zeta Prime. His eyes glowed an iridescent
yellow in the dusk as he looked upon the events unfolding before
him. The human female he had followed for some time now appeared to
have been captured by soldiers of her own kind.

Faron
had observed
the invaders before. When they had first landed and built their
colonies, he and his tribe had spent years gathering all the
information they could, from a distance. They wanted to learn their
ways, their strange language–and he needed to learn if they were
going to be a threat to his people.

He had noticed this female on one such tracking mission. It
had be
en her eyes that drew
her to him. This race all had extremely strange, small eyes, but he
had never seen such a color before. Hers were stormy grey, the same
hue as the most beautiful of Zeta Prime’s five moons. He’d marveled
at her spiraled hair, how it bounced and was the shade of
night.

Witnessing her capture, he growled with displeasure. From
what he had seen of this race, they were greedy and seemed to take
whatever they wished
–without
thought to the consequences of their actions. As he noticed a large
troupe of them stamp out of an unfamiliar vessel and into the place
the female spent most of her time, he assumed they were taking her
area too now, and decided perhaps it was time to stop observing at
a distance.

Blinking against the bright lights inside the
pod
, Jillian stifled a moan
as she was slammed into the side of the vehicle, the sensor on the
cuffs activating the safe-hold feature–strong titanium bars on the
wall fixing onto her handcuffs, securing her to the ship. She was
on a prison pod. The stark grey interior housed only sporadically
spaced bars in a circle, one of which she was now attached to. The
blue sensor on the bottom of each bar flashed, ready and waiting
for more handcuffs–more prisoners.

There was a vague shudder as the pod lifted from the
gro
und and began its journey.
Jillian was now completely alone and utterly bewildered. She
shuffled her feet in an attempt to ease the pressure in her
shoulders. Her thick boots were covered with a film of red dust
from the site, but the black leather trousers and thick,
long-sleeved top remained clean–their anti-stun coating repelling
the brightly colored dirt of planet Zeta Prime.

Knowing it was futile to fight or s
hout in the unmanned ship, Jillian waited patiently in
her awkward position until she felt the descent to land. As the
hatch opened, the bars released her cuffs and two soldiers held her
arms, escorting her into a dingy bunker in a clearing of Zeta
Prime’s peculiar red forest.

Jillian
shook her
head as she walked, trying to make sense of all that had happened.
Arguing with the soldiers wasn’t going to help, so she stepped
inside without a fight.

She was shunted forward inside what could only be described
as a cage. A small box covered with thinly spaced metal strips on
all four sides and the ceiling contained a narrow bed, toilet and
sink. She was astounded
at
the archaic prison facility–inside the dimly lit bunker she could
see long rows of cages like hers, scuffed concrete forming a grid
of paths between them. She saw that the locks on the cell doors
were much higher tech than the old fashioned cells, and similar to
the magnetic locks they used on the site she had just been removed
from. One of her escorting soldiers pressed his fob to the
keypad–she was officially imprisoned.

“
Excuse me.” She asked him
as he tucked his keys back into his pocket.

“
When is someone coming to explain this to me? When do I
give my statement?” She had to fight to keep her voice steady.
Being locked up like a zoo animal had made the seriousness of the
situation more apparent, and concern had started to
grow.

“
Someone will be with you
shortly.” The soldier replied flatly, providing her with zero
reassurance that that would actually be the case.

Jillian
paced the
floor, mind racing. She had been arrested for assisting supremists
to sabotage the gateway. The very idea of it was so ridiculous it
was almost funny. Her job was to keep those extremist protesters
away from the site, and she had done so successfully for a long
time now. Heck, the build was almost finished and there’d been no
trouble at all–thanks to her. She inhaled, feeling some confidence
build. She would be able to clear up this misunderstanding and
prove her innocence, for sure. That’s all it was after all, some
silly misunderstanding.

A loud
explosion interrupted her thoughts. The ground underneath shook and
rumbled, and Jillian had to spread her feet to maintain her
balance. Shouts echoed around the bunker as the atmosphere charged
with panic. For the first time, she noticed other prisoners–their
hands clutching onto the cold metal bars of the cells, the lurid
orange lights above illuminating wildly panicked faces.

“
What was that?” One prisoner yelled to the guards, some of
whom were huddled talking in urgent tones into communication
devices, some running out of a wide door at the front whilst a
couple of them sped up and down the aisles–pulling on the doors of
the occupied cages, checking that the locks had held after the
vibrations from the explosion.

“
Was that a bomb?” A large man on Jillian’s left
spoke.

“
Did something blow up? What’s blown up? Are we under
attack?” The first prisoner continued. At his questions, all hell
broke loose. There were probably only twelve of them locked up, but
it sounded like ten times that as everyone started screaming for
answers and speculating on the event. Jillian heard one person she
couldn’t see start to sob–great, huge wracking gasps of fearful
tears.

In her pe
ripheral
vision, she noticed the prisoner in the box next to her waving
maniacally. He was a short, tubby man in his forties and looked
more like a pompous school teacher than a criminal, she thought.
Jillian squinted to try and see him better, pressing herself as
close as she could to the edge of her sealed cage.

He joined the fingers and thumbs of both hands
together to make a circle then,
raising his eyebrows as if to make sure she were ready, he splayed
his fingers and moved his hands apart, signifying the ruin of the
circle.

Child of the Dawn by Coleman, Clare;
The Troublesome Offspring of Cardinal Guzman by Louis de Bernières
A Buss from Lafayette by Dorothea Jensen
Turning Points by Kalam, A P J Abdul
Small-Town Moms by Tronstad, Janet
Wake Up by Jack Kerouac
Mysterious Mysteries of the Aro Valley by Danyl McLauchlan
Around the World With Auntie Mame by Dennis, Patrick
Battle at Zero Point by Mack Maloney
Tartok the Ice Beast by Adam Blade
Our partner