The local youth club are putting an under-elevens squad together – and Dal, Chris, Abs and Jason are determined to be picked. They know they’re the best players in their school – but what if that isn’t good enough and they don’t make the team? 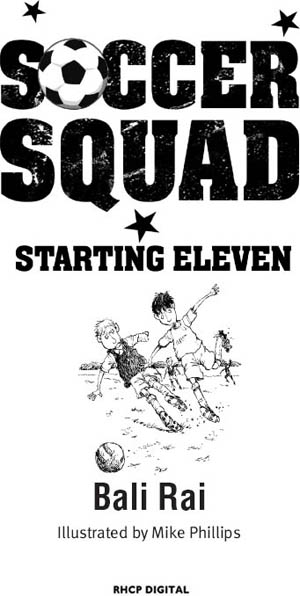 ‘MAKE SURE YOU
eat all of your lunch,’ Mum shouted as I left the house.

‘OK!’ I replied as Chris grinned at me.

‘That’s exactly what my mum said to me,’ he said.

My name’s Dal and Chris is my best mate. We’ve known each other since infants – he’s like my brother, and we always do everything together.

We walked down my road, Persimmon Drive, and round onto Ethel Street, towards
our
school, Rushton Juniors. Rushie for short. It was horrible being back at school. The summer holidays went by so quickly! It was like they had never happened. But at least we had football to look forward to. And we
loved
football. I yawned as we got to the school gates.

‘You could get an elephant in that hole,’ said Chris. ‘A whole
herd
of elephants.’

‘A
big
elephant – like my sister?’ I asked jokingly.

‘No, bigger. About the same size as
my
sister!’ replied Chris.

Our sisters, Jas and Veronica, were best friends too. They were both fourteen. Four years older than us. They were
weird
– always talking about boys and make-up. Or sending each other texts and instant messages. At the same time!

‘Good job they ain’t here,’ he said. ‘Veronica would go crazy if she heard me call her an elephant.’

‘I know. Do you remember when you found her mobile phone and sent those texts to her boyfriend? She was really angry,’ I replied.

‘Yeah – she made me do all the household chores for a month so she wouldn’t tell Dad.’

Chris grinned. Then I asked about football – or rather
The Football
. We went to a local youth club and they had an under-elevens football team called the Rushton Reds. We both
really
wanted to play for them this season and the trials were this week.

‘The notice said tomorrow – at the youth club,’ Chris told me.

‘I’ve got new boots,’ I said proudly. ‘The same ones that Steven Gerrard wears.’

‘I got new boots too,’ replied Chris. ‘My
dad
got them from Rushton Sports in town.’

‘Do you think we’ll get into the team?’ I asked.

Chris nodded. ‘We should do. We’re the best in our school.’

I was feeling a bit nervous about the trials. I mean, I knew we were good players – we were great at football. But what if we weren’t good
enough
? What if my mates made it and I didn’t? I’d be gutted. I
had
to play for the Rushton Reds!

At school we met up with Abs and Jason. They were mad about football too and the four of us were going to the trials together. They were standing by the school gates. Abs
smiled
at us. His black hair was shaved to his head and there were lines cut into it which started at his temples and ran round to the back of his head. Tramlines, they’re called.

‘We battered them!’ he was saying to Jason, talking about his favourite team, Manchester United.

Jason was the tallest. His blond hair was in a new style too – gelled into stiff spikes. He’s got freckles and a mouth that looks too big for his face. And his ears stick out. But he’s brilliant at football even if some of the other boys call him ‘Jughead’.

‘It was a
definite
foul!’ replied Abs, still going on about the game. ‘It’s not like when Chelsea play. The ref always helps them . . .’

Jason raised his eyebrows at the mention of
his
favourite team. He winked at me and
Chris
before answering. ‘Just ’cos your team isn’t the only good one any more!’ he said. ‘You should learn to be more humble, Abs.’ ‘Bet you don’t even know what that means!’

Jason just shrugged. ‘I don’t. I just heard the manager say it on
Match of the Day
,’ he admitted.

The rest of us looked at each other before bursting into laughter.

At lunch time I didn’t wait for the other lads. I was starving and they wouldn’t hurry up. Instead they were having the same conversation as before, about the Premier League and what had happened over the weekend. Only this time Chris was talking
about
our
favourite team, Liverpool FC. I was the first to get to the dinner hall and I went straight for the sausages and chips – my favourite. The dinner lady knew me and she was really nice.

‘Do you want an extra sausage and some more chips, love?’ she asked me.

She gave me three fat sausages and a pile of chips. My plate looked like it had a small mountain of food on it. The smell was amazing and I’d put loads of tomato ketchup on it too! My stomach was rumbling even before I’d sat down. By the time the other lads had joined me, I was nearly halfway through my lunch.

‘We wondered where you’d gone,’ said Chris as they sat down with their lunches too.

‘I was
hungry
,’ I explained. ‘And besides, you were talking about the same things as before.’

‘Abs was saying Liverpool are rubbish,’ Chris told me.

‘They
are
!’ said Abs through a mouthful of pizza. Bits of it flew out and landed all over the table.

‘
Ehhh!
’ said Jason. ‘Can’t you wait until after you’ve swallowed your food?’ he asked. ‘My mum would kill me if I did that.’

‘She’s not here though, is she?’ replied Abs.

‘That’s not the point,’ said Jason, going red and looking a bit angry.

‘Yeah, like how your team was lucky to beat Aston Villa four–nil on Sunday,’ said Jason, his face becoming one big silly grin.

Despite not wanting to talk about the weekend I couldn’t help myself. Jason was talking about Liverpool and they were my favourite thing ever. There wasn’t a song or a
TV
show that matched them. There was no way he was going to get away with it, even though we spent ages every day winding each other up.

I held up four fingers to show Jason exactly what I meant.

‘EAT YOUR LUNCHES IN SILENCE!’ came a shout from behind us.

We didn’t need to look to know who it was. It was Mr Williams, the deputy headmaster, and he was always shouting at everyone.

‘I bet he even shouts at home,’ said Chris in a whisper.

‘
Get me my slippers! Where’s my toast?
’ Chris said in a slightly louder voice.

‘I feel sorry for his wife,’ said Jason.

We laughed as quietly as we could manage and then I went back to worrying about the football trials.

WE SPENT THE
whole of the next day talking about the football trials, which started straight after school.

‘I hope I can play in my best position,’ Abs said during morning break. ‘I love being a striker!’

‘What – from the bench? Because that’s where you’ll be watching us play from!’ asked Chris, before opening a bag of cashew nuts. He was always eating nuts.

‘Like
your
jokes?’ replied Chris. ‘You tell some of the unfunniest jokes in the world.’

‘I don’t think “unfunniest” is a proper word,’ Jason said.

‘Yes it is – my sister uses it,’ replied Chris, throwing a cashew nut at Jason.

Jason dodged and the nut flew past his head. ‘Oi!’ he shouted as Chris smirked.

‘Bet it’s not in the dictionary,’ continued Abs, still going on about the word ‘unfunniest’.

Redemption by Draper, Kaye
Sarah McCarty by Slade
Kill Your Darlings by Max Allan Collins
Savage Arrow by Cassie Edwards
Commander by Phil Geusz
Rescue Me by Cherry Adair
Raise Your Glass by John Goode
The Legacy of Heorot by Niven, Larry, Pournelle, Jerry, Barnes, Steven
Easy to Like by Edward Riche
Shifting Changes (The First Shift) by Marlowe, Sage
Our partner