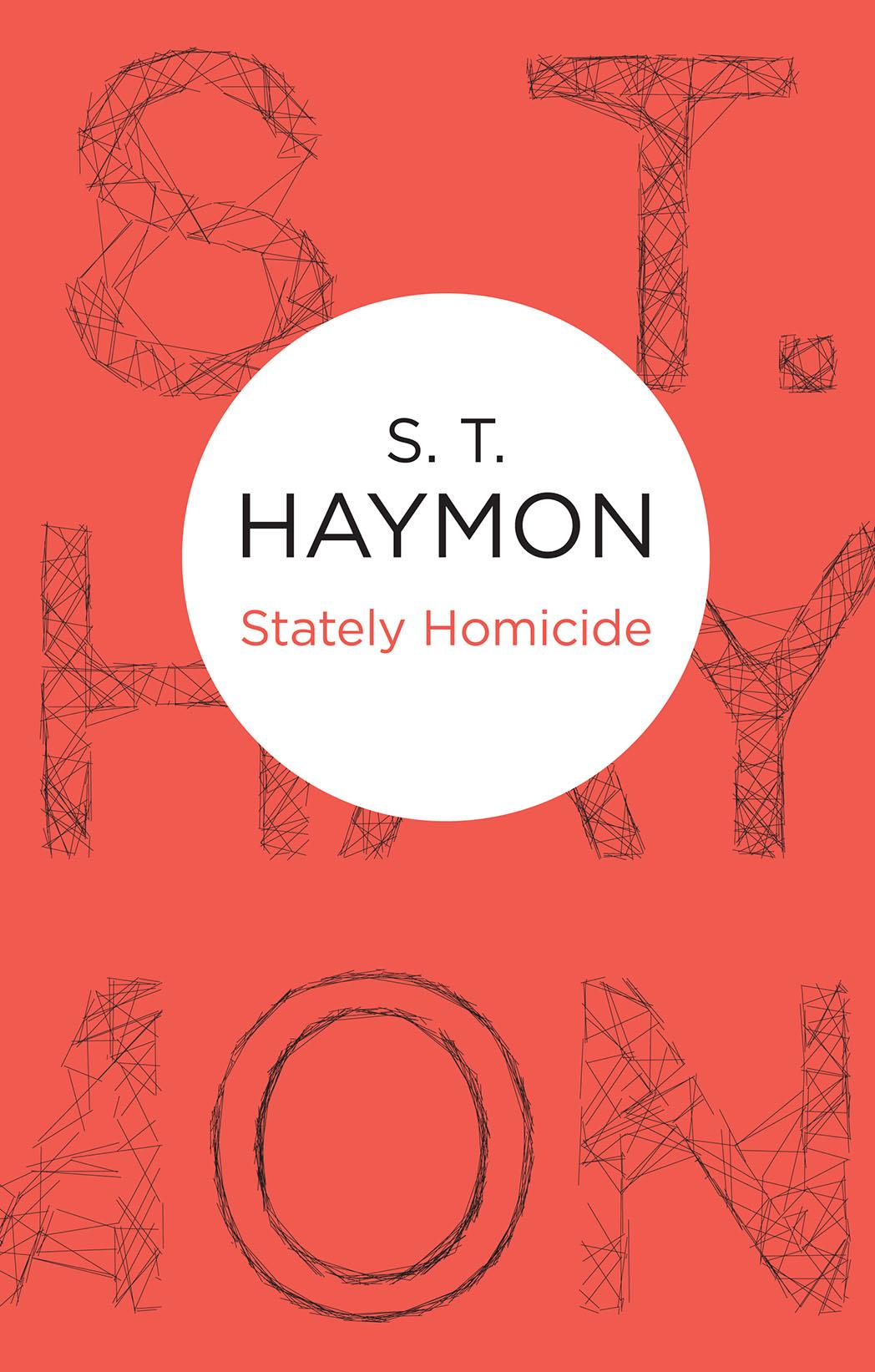 Sylvia Theresa Haymon was born in Norwich, and is best known for her eight crime fiction novels featuring the character Inspector Ben Jurnet. Haymon also wrote two non-fiction books for children, as well as two memoirs of her childhood in East Anglia.

The Ben Jurnet series enjoyed success in both the UK and the US during Haymon's lifetime:
Ritual Murder
(1982) won the prestigious CWA Silver Dagger Award from the Crime Writers' Association.
Stately Homicide
(1984), a skilful variation on the country house mystery, was praised by the
New York Times
as a âbrilliantly crafted novel of detection â¦ stylish serious fiction', and favourably compared to the work of Dorothy L. Sayers.

The scream rent the midsummer air, demanding attention. Out of the trees behind the house rooks rose in protest. On the great lawn in front, a child let go the string of its balloon and ran, crying, to its mother. The helium-filled heart wafted lazily across the rose-red frontage, surmounted the stone balustrade, and drifted away in the direction of the lake, its metallic crimson flashing signals not to be deciphered.

Detective-Inspector Benjamin Jurnet, on his way through the pleached alley that led to the Coachyard, grinned. Anywhere else, a sound like that would have had him burning up the tarmac before it had even stopped, his heart pounding as he wondered what it was this time: mugging, rape, or bloody murder.

As it was, he emerged unhurriedly from the shade of the limes into the scorching yard, and gave a commiserating nod to the peacock perched on the rim of the stone basin in the centre that had once been a fountain. As one who had just that minute abandoned as hopeless his place in the queue outside the refreshment room, the detective felt he knew exactly how the bird must be feeling. He'd be screaming like that himself if his gullet weren't as dry as a packet of soup-mix.

The peacock cocked its head to one side and regarded the detective with a red and challenging eye; then jumped down to the ground and walked away, its train drooping tiredly over the blistering cobbles. Again, Jurnet knew the feeling. The jacket he was carrying had grown steadily heavier, in direct proportion to the sun's implacable trudge up the cloudless sky. He had taken off his tie and rolled up his shirt sleeves, to no avail. The heavy stuff of his trousers rubbed his inner thighs: his Y-fronts were sticking to him as if they had designs on his virtue. What the hell had possessed him to put on a suit instead of sports shirt and slacks? If Miriam had been at home she would never have let him out of the house, in that temperature, got up like he was going to a funeral or an interview with the Chief Constable. But that was just it, wasn't it? Miriam wasn't at home.

The yard, incongruously for Norfolk, had the look and feel of a Mexican pueblo at siesta time. The air trembled above the red-pantiled roofs. The flats over the converted stables had their blinds down against the glare. On the door of one of the coach houses which took up the only side of the yard where there was any shade, a notice lettered with a rather too nice regard to typography explained that the craft workshops would reopen at two-fifteen.

It was just on two o'clock.

Jurnet hesitated: momentarily contemplated rejoining the refreshment queue, then crossed to a door in the north-west corner. There, he banged on the black-painted knocker which, fashioned in the shape of a bull's head with a ring through its nose, was identical to that affixed to every other door in the yard. He had to knock several times before he heard a step on the stair within, and then a voice which he did not at first recognise: âStop that, blast you! You'll wake up my little boy!'

âOh, God!' There was a pause. Then the voice inside said: âYou'll have to wait. I'll go and put something on.'

The detective heard the footsteps recede, and waited, wondering what was the matter with Anna March's voice, what was the matter with Anna March. That she had forgotten their arrangement was obvious â which meant, more than likely, that the earrings still weren't ready. Which, in the circumstances, wasn't the end of the world. To a man trained to detect signs of stress and distress, it hardly seemed enough to account for a voice like that.

Returning, the footsteps sounded louder. Anna must have put on shoes, or mules more likely, to judge from the heels clonking down the uncarpeted stair. Jurnet braced himself for the encounter. Anna March was not one of his favourite people.

âNo need to take on about the earrings â' he began, the instant the door opened. âMiriam's having such a fabulous time, she's decided to stay on a bit longer. The chances are she won't be back by her birthday after all.' He did not feel it necessary to add that the chances were she would not be back, ever. âTake all the time you need.'

âI should have phoned. Bringing you all the way out here for nothing â' Anna March pushed her long, dark hair back from her forehead. She looked unwell, the purple-patterned kaftan she had put on throwing up reflections that deepened the shadows under her eyes. As Jurnet had guessed from her voice, she had been crying.

âNot to worry. Nothing else on.' Which was true enough. What else was there to do on your day off when your girl had taken herself off to some grotty island in the Aegean crawling with young fishermen with the bodies of Greek gods and the morals of alley cats? The detective put aside his own inner preoccupations and looked at the young woman with a compassion only slightly diluted with impatience. Anna had always been a bit too intense for his taste; but that was Danny's business, not his. Since it was inconceivable that Danny March could be the cause of his wife's trouble, the detective inquired cautiously, not really in the mood for doleful confidences: âTommy OK? I hope I didn't really wake him up.'

The woman managed a smile at that.

âI shouldn't have gone for you. Tommy'd sleep through an artillery barrage, you know that.' She pushed her fingers through her hair again, and tears, of which she seemed unaware, took their leisurely way down either side of her rather sharp nose. âBit on edge myself, that's all â'

âThis heat! Enough to give the sun a thirst!' Jurnet paused hopefully. It did not seem the moment to ask for a drink outright. When no offer was forthcoming: âOnly sorry I bothered you.'

âI should have phoned,' she repeated. âLook â' making a palpable effort to pull herself together â âsince you're here, why don't you give me an hour or so to see what I can do? It could save you another journey. You could go round the house while you're waiting â I'll give you a pass, if you like. Or would that be too boring? You and Miriam must have done it a million times.'

âMiriam, not me. She's the culture hound. I usually opt for a snooze on the grass down by the lake. Or a drink,' he added, not expecting anything to come of it.

âBut that's terrible!' Her eyes, for all her misery, widened in professional disapproval. You could tell she had once been a schoolmarm, and no mistake. âOne of the most historic houses in the eastern counties and you haven't â' She broke off, then finished: âYou mean, you haven't even been into the Appleyard Room?'

âI'm not much of a one for heroes,' the detective replied truthfully. âStill, I'll do it today, if it'll get me back into your good books.
And
I'll pay for my ticket, thank you very much for your kind offer. What time d'you want me back?'

âGive me a good hour. After that, whenever you're ready. Stay and have tea, if you've nothing better to do. Danny'll be back by then â he's gone into Angleby to pick up some wood. Tommy will be up too â'

For no reason that the detective could fathom, the tears began to fall faster.

âLook â' he proposed, genuinely concerned â âwhy don't you let me take you and Danny out for a meal tonight? There's a new place in Shire Street â cheer you up if you're feeling off-colour, and with Miriam away, you'll be doing me a favour. What do you say? Can you get someone in to babysit?'

âWe can't, not tonight. There's a do on here â official, sort of. Not that I've decided to go â'

Now the woman was crying unashamedly. Awkward on the doorstep, the sun burning his shoulder blades, Jurnet harboured briefly the uncharitable thought: could it be all the fuss was over a new kaftan for the occasion, a poncho, djellabah, or whatever was the right word for those ballooning draperies in which, for reasons best known to herself, Anna March chose to engulf her spare shapeliness?

Wishing he had never thought to commission the bloody things, Jurnet said soothingly: âForget about the earrings. Why don't you go and put your feet up for a bit? Do you the world of good.'

âNothing will do me any good,' Anna March announced drearily.

âDon't you believe it!'
Jesus
, the other thought,
poor old Danny!
For a moment Jurnet even found it in his heart to think fondly of Miriam who, whatever other deadly weapons she kept in her arsenal, never resorted to female vapours. âA bit of a kip and you'll be wondering what all the carry-on was about.'