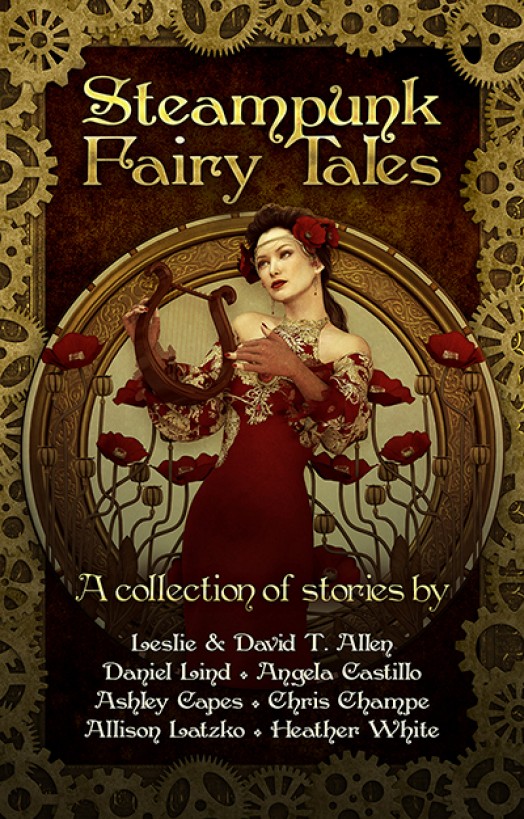 Published by Various at Smashwords

This ebook is licensed for your personal enjoyment
only. This ebook may not be re-sold or given away to other people.
If you would like to share this book with another person, please
purchase an additional copy for each recipient. If you’re reading
this book and did not purchase it, or it was not purchased for your
enjoyment only, then please return to Smashwords.com or your
favorite retailer and purchase your own copy. Thank you for
respecting the hard work of this author.

Imagine how your favorite fairy tales would be told
by an advanced Victorian society that’s powered by steam.

That was the idea Angela Castillo proposed in our
online writing community. She handpicked six other writers to
contribute and provided few restrictions. It wasn’t until
weeks later we realized that, even with such a small group, the
authors represented three continents and were retelling myths from
Germany, England, France, Italy, and Japan.

Some stories stay close to their roots, while others
have familiar elements but come with a twist. When reading,
make a little game of it: see if you can guess the fairy tale. Some
are classics, others are obscure, and a few might not be circulated
in your culture. You can check your guesses at the end of the
book.

One thread unites them all: each tale is a
reimagining of how it would be told from a steam-driven society.
Please, enjoy.

If you would like to learn
more about steampunk, please see
http://wikipedia.org/wiki/Steampunk

Ol
d Man
Streusel knew about the magic in his toy shop. It whispered in his
ear and sent dancing breezes to tickle his nose even when the doors
and windows were closed.

When customers entered the
building, the magic settled on their cheeks in a warm glow. Most
adults wrote it off as happy childhood memories brought on by the
colorful toys, but the children knew better.  They stared at
Streusel with wide eyes and he would wink.

Whirs and clicks filled the shop,
for Streusel had bestowed the gift of movement to every toy. Tin
cows kicked over the tin pails of anguished tin milkmaids.
Miniature trains belched steam as they rushed across tiny tracks.
Engines in horseless carriages, sized for mouse drivers, chugged
and clunked when curious children cranked the front
handles.

Streusel’s joy was only complete
when the shop was full of happy children. He would wrap up one toy
after another, whispering a blessing with each as he sent them off
to new homes.

The toy shop was located in a
large village built around a great factory, with giant rows of
smokestacks that belched black clouds into the heavens. This
company was owned by a kind man who cared for people and made sure
each employee was paid fairly and not overworked.

On paydays, tired factory workers
stepped into the cozy shop on the way home to choose toys for their
children.

Most days, Streusel created many
toys at once, like a one-man factory. He’d set out gears, frames
and various metal shapes to form rows of boats, trains or
dolls.

But Pieter was
different.

Pieter was a clockwork doll. His
body was formed from hammered tin and his inner workings created
from the gears and cogs of a discarded cuckoo clock. Streusel had
made dolls that could wave, twist and bow, but Pieter could do all
three and then some. Streusel spent months on the toy, bending
pieces this way and that, often staying up far into the night to
frown over a tiny scrap of metal. Since Streusel had no family of
his own, he poured all the love his lonely heart possessed into the
little doll.

Finished at last, he sat the tiny
man in a place of honor beside the cash register.

Pieter charmed all the customers
with his bright red cap and green coat. Whenever a child came into
the shop, Streusel would turn the tiny key in his back and Pieter
would go through a special routine. He would remove his hat, bow
and dance a jig—fast at first, then slower and slower as the
clockwork ran down.

Children clapped and squealed in
delight, and parents would ask, “How much?”

Streusel always folded his arms,
shook his head, and beamed until his round cheeks turned pink. “Not
for sale,” he would say. “He’s my special one.”

He had almost completed Gerta, his
clockwork woman, when he noticed a change in Pieter.

Sometimes when he’d turn the key,
Pieter’s antics went on after the clockwork wound down. On occasion
the toy would give an extra bow or wave. When Streusel was alone in
the shop, working on Gerta’s parts, he’d hear a quiet
‘
creak.’

He’d look up to see Pieter’s
tiny face turned toward him, his shiny, painted eyes gazing at him
with an extra twinkle Streusel hadn’t added with a
brush.

Adjusting the setting on his
workman’s goggles, the old man always checked the toy over to see
if he’d overlooked a flaw causing these strange movements. The
magic tickled the back of his mind, reminding him of its
presence.

Gerta progressed much faster then
Pieter, being Streusel’s second doll of the kind. By the time he’d
put the finishing touches on her blue milkmaid dress and formed the
pink flower for her golden metal curls, Streusel could no longer
deny the truth.

The magic of the toyshop had
settled into Pieter’s tin heart. Streusel wasn’t frightened when
Pieter clanked over the tabletop to him and made a bow so deep his
cap almost brushed the wooden surface. After all, the toyshop was a
place of joy and happiness, and therefore could only create good
magic.

From then on, when Streusel
polished and painted and tweaked, he would hear little snaps and
creaks and look up to see Pieter standing beside him, watching in
apparent fascination.

Then came the night he placed the
completed Gerta beside Pieter. Pieter placed a hand on Gerta’s tin
shoulder and made a creaking sound.

A shudder ran through Gerta’s tin
form. Her head turned. “Hello!” she creaked back.

Pieter took Gerta’s hand, and
together they bowed before Streusel. “Father,” they said in
unison.

The following days were filled
with fun. While Streusel tinkered at his work bench, the little
dolls played hide-and-seek among the tools and parts, calling to
each other in tiny voices. At night, they snuggled in doll beds
while Streusel read them bedtime stories. When customers came into
the shop, they would ‘play dollies’ as they called it, entertaining
the children with their funny routines. Parents begged Streusel for
a price, and he would always refuse. How could he sell his
children?

One day, a dark cloud settled over
the town. The factory owner who had cared so much for his workers
died. A wealthy man from a land far away purchased the factory from
the family of the deceased.

Whispered stories began to drift
through the streets about injuries from faulty machinery. Wages
began to spiral down, and those who complained were fired and sent
out into the street.

Workers trudged by Streusel’s toy
shop on weary feet with no extra coins in their pockets for such
trivial things as toys. The children would press cold noses to the
shop windows to gaze at the forbidden treasures.

Only a few weeks after this turn
of events, Streusel sat at his counter, sliding the few pennies
he’d managed to collect into a tin box. Pieter and Gerta stood
before him, dancing their prettiest jig. He forced himself to
smile.
What do they know of this
cruel world?
The magic in the
shop had weakened from the sadness, but the dolls remained happy
and full of joy.

Not long after, Streusel was
forced to give up his peaceful life. He sold his remaining toys for
pennies. An old woman bought the shop to turn into a day-old bread
store. With this money, Streusel knew he could survive for a short
time.

One of Streusel’s good friends
owned the theater in the middle of town. He offered Streusel the
small loft above for help with building repairs. When the toymaker
arrived, he unpacked his few possessions and placed them around the
tiny apartment. Last, he pulled out his greatest treasure: the
cardboard box containing the two clockwork dolls and their
beds.

The toys stretched and looked
around them in bewilderment.

“Father, where is the workshop?
Where are the children?” Pieter asked.

Streusel began to cry in great,
heaving sobs, and the toys patted him and laid their cold, tin
heads against his tear-stained cheeks.

Every day, Streusel went out to
look for work. He was too old for the factories to consider and all
the shop owners would shake their heads in regret. Sometimes he
sold small parcels of firewood he had gathered from the woods near
town. More often he brought Pieter and Greta out to the streets.
They could attract a reasonable crowd and bring smiles to the most
dismal of faces with their antics.

After dancing merry jigs or doing
acrobatics, the dolls pretended to wind down with hats
outstretched. Children pleaded with parents, and someone in the
crowd always produced a spare penny so Streusel could wind them up
again.

When he walked home each day,
Streusel struggled with the guilt of bringing his children back to
the gloomy apartment, but when he saw the pinched faces of
neighborhood children he would comfort himself by
thinking,
at least my children
will never go hungry.

One gloomy day, rain drenched the
dreary streets and left a maze of puddles in its wake. Streusel
almost chose to stay home, but his stomach rumbled and it was too
wet to gather wood dry enough to sell. So he picked up the
cardboard box and stepped down the narrow, dark staircase to the
ground floor of the theater. Tinny voices strained through the
walls of the box while the dolls talked in excitement about the
children they would see that day. Streusel held the box closer to
his ear.

Streusel chuckled to himself. It
never ceased to fill him with wonder, these tiny people who had
come into his life.

Ah. They are dolls. What
could they possibly understand about love?

He found an awning by a busy
street to set up for the day. Despite the mist, quite a few people
scurried through the lanes, and soon the clockwork dolls performed
for a larger crowd than ever. They emptied their tiny caps into
Streusel’s big one, and before long it was jingling with
coins.

The happy event was interrupted by
a child’s cry. “Run for your lives!”

A black carriage crashed through
the crowd, drawn by four ebony steeds. The coachman had neglected
their bits and foam mixed with blood streamed from the cobalt
mouths while they reared and plunged through the mud in a wild-eyed
frenzy.

People screamed and scattered.
Streusel’s dolls stood in the middle of the street where they had
been kicked by the frightened children’s feet.

Streusel pleaded from the side,
“Come to me! Come, my children!” but they could not hear him
through the madness. Hand in hand, they ran in the wrong direction,
under the wicked wheels of the carriage.

The coach clattered away, and the
street cleared. No one saw Old Man Streusel when he bent to collect
the broken parts of his dolls.

He trudged home and cleaned the
mud from the twisted pieces of tin as best he could. Placing them
back in the cardboard box, he decided to bury them in a quiet place
after the rain stopped. The air in the room rested on his shoulders
like a leaden shawl. Every spark of magic had been sucked
away.