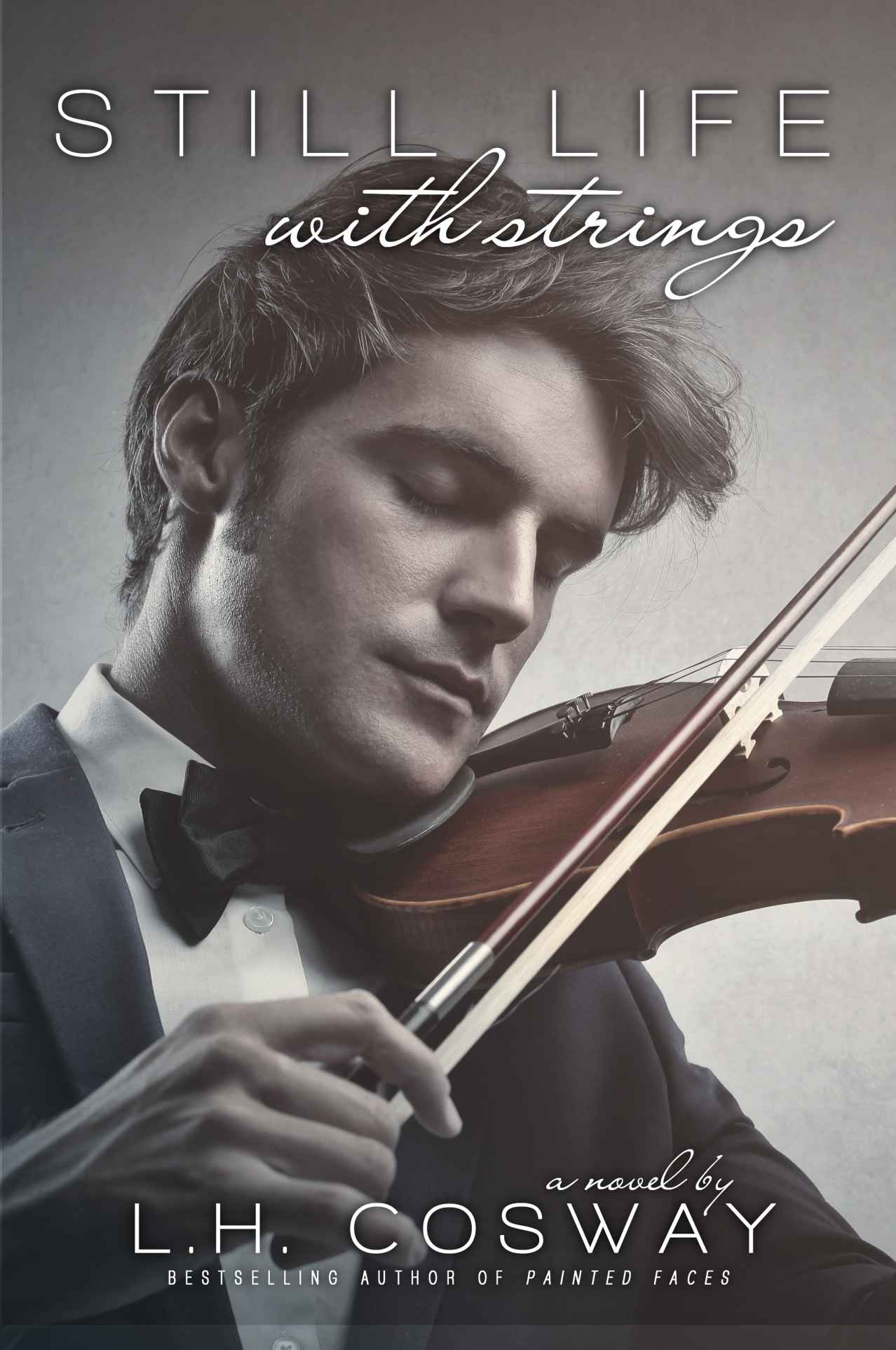 This is a work
of fiction. Any resemblance to persons living or dead is purely coincidental.
No part of this book may be used or reproduced in any manner whatsoever without
written permission from the author.

A Vision of Green
(Florence
Vaine #2)

You are a drop in a
gigantic ocean but you mean the world to me.

I sincerely hope you enjoy
Still Life with
Strings
.

At eighteen
years of age, he never knew true grief until he saw her crying on the six
o’clock news.

It was so
palpable he could almost mould it with his hands.

His fingers
itched to create a melody that would be the musical embodiment of her mourning.

So he picked up
his violin and began to play.
One

They call me the Blue
Lady.

The more poetic would
say a dark angel, or an unexpected, fantastical surprise standing upon the
mundane street. I wear a long midnight blue dress, a matching wig, white paint
on my hands and face, and glorious, feathery blue wings affixed to my back.

I feel like a gap in
reality, a moment where people can pause mid-stride and say in a breathy,
wonder-filled voice,
wow, look at that
. For the more cynical,
wow,
look at that nutjob
.

Perhaps for a moment
someone will think that they’ve stepped into a world where normal is not the
rule anymore, that the extraordinary is. That my wings aren’t false but real,
that my skin is really this white, my hair really this blue.

Unfortunately, none of
it is real.

But it’s nice, isn’t
it, for a brief moment to imagine that it is?

In reality I’m a
twenty-six-year-old woman with a stack of bills I’m struggling to pay and two
younger siblings who are reliant on me to keep a roof over their heads, clothes
on their backs, and food in their bellies.

I do this living statue
act whenever I have the free time. It gives me an artistic outlet, while also
making me some much-needed cash on the side. Admittedly, I don’t normally do it
at one o’clock in the morning in the middle of Grafton Street, but it’s a
Saturday. That means there’ll be lots of tourists. More to the point, lots of
drunk tourists with loose pockets and even looser inhibitions about who they
hand over their cash to – such as women who stand very still while dressed like
a Manga fairy.

I stare directly ahead,
unblinking, controlling my breathing using a
qigong
method, just as I
hear the recognisable loutish shouting and laughter of a stag party up ahead.
When they come into my line of sight, I see that they’re all wearing black
T-shirts with their nicknames written across the back and
Jack’s Stag
Weekend
across the front.

I am an island, an
inanimate object among the to and fro of humanity. I brace myself for the
possibility that the stag party is going to be trouble. Moments later, one guy
stands in front of me, waving his hand in my face and trying to get me to
blink. How original.

Sometimes I feel like
those guards who stand outside Buckingham Palace. And like those long-suffering
buggers, I have also perfected the art of remaining still and giving no reaction
at all.

“Are you blue all
over?” he slurs with a drunken sideways grin.

As a street performer,
you have to take the rough with the smooth. When you put yourself out there,
you’re going to encounter every facet of society: the good, the bad, and the drunk
off their arses. Kids are the best. They haven’t yet lost the sense of wonder
that makes them stare up at you and truly believe you’re some sort of
blue-fairy-bird-woman-thing.

“That’s a real nice
rack,” says another of the stag partiers.

Yeah, you try carrying
it around all day and dealing with the back problems, and then tell me how nice
it is
, I think. Soon they lose interest and continue on
their way. A half an hour passes, and several more pedestrians throw some coins
into my hat.

The moon is full tonight,
a round white orb perched amid the stars. I want to go up there and see what
everything looks like from on high. I flutter my wings and prepare for flight,
flapping them through the air and then leaping into the sky. My ascent is an
easy one. I pluck a star out of the blackness and stick it in my blue hair as
an adornment. When I reach the moon, I find a comfortable spot and sit. Leaning
my chin on my hand, I gaze back down at the street. The people look like tiny
black ants, the buildings like less brightly coloured blocks of Lego.

I blink, and I’m back
on my box, back on the street. I was never really on the moon. My wings are a
pretty accessory, but they’re useless for flying. Sometimes I can imagine
things so hard that I feel like they’re really happening.

My eyes catch on a
group of people I recognise. They all play in the symphony orchestra at the
concert hall where I work as a ticket attendant and bartender. I don’t talk to
most of them, but I’m friends with a couple of the ladies. I know that one of
the violinists is leaving to move to Australia with his family, so tonight must
be his big send-off.

Often on my breaks I’ll
sit at the back of the hall and watch their rehearsals, allowing myself to be
swept away with the music. My favourite sound is at the very beginning of their
performances, when all the instruments clamour together to get in tune. It
builds up this addictive sense of anticipation.

I envy their lives as
musicians, travelling the world and playing for amazing audiences in historic
venues. It’s so much more beautiful than the life I live. I think a lot about
the fact that I’m constantly near these people, and yet my reality is so far
removed from theirs.

None of them even know
that the woman with the painted skin dressed all in blue is the same inner-city
girl who sells tickets for their concerts and serves them drinks at the bar
after their practices.

In a way it’s quite a
wonderful feeling. For a moment I am unchained from my own humdrum identity.

By the time I withdraw
from these thoughts, the orchestra musicians are gone. Slowly, I turn my head
slightly to the left and find a new position. I stand in the same pose for
fifteen minutes at a time, and then I’ll make an almost imperceptible move to
ease some of the strain. It takes willpower and the patience of a saint to do
this. Fortunately, I’ve had years of practice being responsible for my younger
siblings.

I’m all about the
willpower, especially since I’m a recovering alcoholic who works in a bar. Most
people say that to properly get over an addiction, you have to purge all
presence of the drug from your life. I take a different approach. The fact that
I can be around alcohol and not drink it, well, I like to think that makes me
stronger. It’s been five years, and I haven’t touched a drop.

Anyway, what with jobs
being so thin on the ground these days, I can’t exactly afford to be picky.
You’ll be amazed by what you can achieve when necessity sets in.

Once I settle in my new
position, I notice a man standing by the shuttered window of a shop on the
other side of the street. He’s got brown hair in what my mother would have
called a “gentleman’s haircut” when she was alive. It’s all neatly combed and
swept to the side. His facial features are exotic yet not, giving the
impression that he was born of a white father and an Asian mother — or vice
versa.

He’s just standing
there staring at me, looking fascinated and a small bit lost. I sometimes
encounter people like this. Adults who see me and are touched by whatever
emotion my appearance has managed to evoke in them.

These are the things I
live for. Aside from the money, it’s the main reason why I do this.

Up until this moment,
though, I’ve never had someone I’m attracted to show a similar sort of wonder.
His eyes crinkle in a smile. I think he knows that I’ve noticed him. A couple
who have also been watching me for several minutes finally drop some money in
my hat, and I give them a small bow for their generosity.

My legs are starting to
get a little too stiff, so I decide it’s time to call it a night. Stretching my
arms up over my head and stepping down off my box, I pick up my money hat, fold
it in half, and shove it into the box.

The beautiful man
across the street stands up straight when he sees me move. I pull off my wig
and stick that in the box, too, loosening my real hair out of the tight bun I’d
had it in under the wig. Making sure not to damage the feathers, I shrug out of
the wings and place them inside as well.

When I glance up, the
man is standing before me, too close almost. His eyes are a deep golden brown,
like a glass of fine brandy, and his features have a delicate masculinity.
Strong yet vulnerable.

“Hello there,” I say
with a hint of amusement, pulling my long cardigan from the box and shuffling
out of my blue dress. I always wear a light slip underneath.

Callahan's Place 10 - Off The Wall At Callahan's (v5.0) by Spider Robinson
The Corner of Bitter and Sweet by Robin Palmer
Paradise Fought (Abel) by L. B. Dunbar
The Rock Star and the Girl From the Coffee Shop 2: Under Pressure by Terry Towers
Anita Blake 19 - Bullet by Laurell K. Hamilton
Original Sin (Dark Saints Motorcycle Club Book 1) by Love, Amy
Outpost: Life on the Frontlines of American Diplomacy: A Memoir by Christopher R. Hill
No Reservations by Stephanie Julian
Under My Skin by James Dawson
The Haunted Igloo by Bonnie Turner
Our partner