Storm of Arranon Fire and Ice 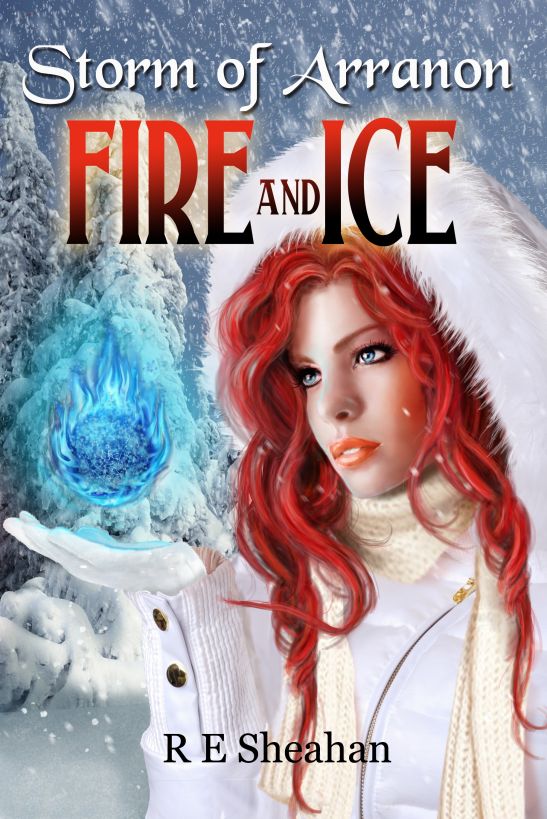 Names, characters, places, and incidents are
products of the author’s imagination.

Any resemblance to actual events, locales, or
persons, living or dead, is entirely coincidental.

All rights reserved. No part of this book may
be reproduced or transmitted in any form or by any means without
written permission from the author.

The author can be contacted at:

For Scott and Parker

with all my love.

I want to thank Bob and Ruth Harris, Martha
Straube, and Russell Turney for their valued time and
assistance.

My honest, tough, and incredible editor,
Karen Parker encourages me always, and keeps me writing the best
story possible.

A world on the threshold of destruction.

A crossing into a mysterious realm.

A HIGH PIERCING SCREAM RIPPED through icy air
and echoed along the dark intersecting tunnels. The shrieking faded
and died.

Possession was a painful adjustment.

For the one being possessed

Dhoran smiled. He felt the corners of the
host’s lips jerk in a reluctant response.

The cowering consciousness slid into a dark
recess of their now
shared
mind, making room for the new,
dominant one.

Destiny was on Dhoran’s side. This healthy
athletic body suited him. It hadn’t been necessary to go through
numerous candidates before finding an appropriate match, raising
suspicion. The
Shifter
sent to lure an inhabitable being to
where Dhoran’s spirit-self waited had done well. He’d found the
perfect vessel on his first attempt.

I will reward him. Allow him to…play with
these surface dwellers

The host’s memories swirled, mingling with
Dhoran’s. A short life so far, but full. Intelligence, pride, and a
fierce drive to be of service propelled an unselfish soul. His
knowledge remained for Dhoran to draw on, providing necessary
information on these foreign surroundings.

Dhoran stared down at his new body.
Sensations dead for nearly two decades rushed through him. A
strong, regular heartbeat pounded in his chest, radiating warmth to
his extremities. Beads of sweat tickled his smooth skin. Cool air
moved in and out of his lungs. He trembled at the simple yet
intricate workings of life he’d taken for granted, and inhaled
deeply. The familiar scent of damp, musty soil permeated his
nostrils. A light sweetness lingered in his mouth, and he licked
full lips, finding more of this spicy syrupiness. His tongue darted
across even teeth blunted with flat surfaces for grinding. He
frowned.

There will be no rip and tear to this
bite
.

Dhoran raised his hands and glared down at
the shape and size of them. Static popped. Blue currents snapped
and wound around his fingers. His abilities seemed to be intact.
But he missed the thick claws and taut muscles that had rippled
under the glossy red-gold scales of
his
body. He recalled
how his naked skin had glowed and shimmered in the firelight. With
an unsteady reach, Dhoran touched the back of his neck. Long hair
clasped in a metal clip replaced the heavy mane that had grown on
his head and along his spine. He closed his eyes and growled,
angered at the loss.

Dhoran’s true form had been exotically
handsome to females from the surface and his underworld. His body
had exuded a singular power and grace, evident in the reverence and
fear of those subservient to him. His large gold-green eyes had
missed nothing, and his notched ears had discerned even the
slightest resonance. When he smiled, thin lips slid over sharp
teeth.

I would have won the girl over in my
previous form
.

An icy wind whistled through the warrens.

I must be near an access to the outside
world
.

Dhoran shivered. He’d forgotten how bitterly
frigid the surface of Arranon could get. He preferred the comfort
of his underground kingdom. He sighed and nodded, the motion stiff
and halting. The temporary sacrifice of warmth would be worth the
results.

When Zander Tourani’s daughter joins me,
enhancing my power, I will inspire fear throughout the galaxy. No
one will dare attack Arranon again. With help from the daughter of
my only equal and one true enemy, Arranon will be mine.
Forever
.

Tourani’s daughter was young, little more
than a child. Her inexperience would make her pliable to Dhoran’s
will and unwise to the wiles he possessed. He would convince her of
the importance of forming a…merger with him. For the good of
Arranon, she would agree to a union. The recent invasion of a
marauding alien society would add credence to his proposal. He
offered the means to keep her home world safe.

First, he had to find her.

A similar ploy to join forces for the safety
of Arranon had nearly worked on her father.

Or had Tourani’s compliant manner been a
ruse within a trap
?
Yes. Tourani would consider
self-sacrifice a noble end
.

Tourani’s deception had triggered his own
death, as well as Dhoran’s.

Foolish. Tourani knew I would return. My
spirit remains strong. My power will never die. Will there still be
those eager to do my bidding awaiting my…re-birth
?

Black, oily shadow shapes slithered toward
him, silent in their fluid advance. Shifters hissed and bowed their
submissiveness. These creatures would obey him without
question.

Dhoran tried his voice. “Camorra nah.” The
timbre pleased him. He held up his hand, the movement uneven. He
growled deep in his throat at the host’s continued resistance. “I
will use the predominate language of the surface.” He had no
difficulty controlling speech. The tone coming from him was deep
and soft, appealing to his ear.

The assembled Shifters deepened their bows
and trembled at the sound of their master’s voice.

“Return to our underworld. Advise your
brothers to find the girl.” Dhoran’s command demanded fulfillment.
“The one who does so will gain my approval and an ample reward.” He
chuckled, the rumbling more growl than mirth.

Without a scuff or scrape of flesh on stone,
the Shifters disappeared, blending into yawning shadows and leaving
the faint stench of putrefying flesh hanging in the chilled
air.

Dhoran took a step forward, the action
unyielding. He fought for control of this body, arching his back
and rolling his head. His arms flexed and extended in a convulsive
twitch. A low snarl issued from deep in his chest. “Obey me. You
have no choice.” He bit down, slicing the tip of his tongue. The
salty, metallic taste of blood filled his mouth. His muscles burned
with resistance. He increased the pressure, an internal struggle
against the possessed being’s last push of opposition. “I
will
command this body. When I have accomplished my goal, I
may return it to you.
If
you behave.” A final snap of
determination resonated, vibrating through his core.

The fight was over.

Dhoran walked with long easy strides through
dim corridors, warrens chiseled by time, elements, and natural
cataclysm in the primeval granite. His shadow glided from behind to
ahead in the spaced lighting centered at the tunnel’s apex. The
click of his boots against stone was music. Icy air caressed his
cheeks. The unfamiliar but recognizable scent of trees, spicy and
sharp, assaulted his senses. His heart rate increased, nerves
tingled. He slowed and stopped.

I am close to the surface. How long has it
been since I set foot in that hostile environment
?

Dhoran’s musings took him to the moments
before his premature end. He had steadily rebuilt the forces needed
to begin a final battle and seize what he believed was rightfully
his.

Years of careful preparation had his armies
in place, ready to attack the world above. Then Tourani interfered,
overthrowing Dhoran and ruining his strategy for domination.

Dhoran’s breath hitched in with the
comprehension of precious time wasted, passed in a temporary death.
Anger flared. Lights above him popped, extinguishing in a crackle
and whiff of scorched wiring. Electric tendrils snapped and pulsed
outward, wrapping Dhoran in a deep- purple glow that reflected off
uneven stone walls. He closed his eyes and pulled in the throbbing
current. The cavern went black, but the quiet buzz of static
remained.

The snapping hum quieted, and a preternatural
stillness filled the dark. Dhoran’s eyes opened and he smiled. With
planning and patience, a most gratifying revenge would be his.

He continued to an alcove with tunnels
leading off in several directions. His murk-accustomed eyes
detected a faint natural light seeping in from an opening to the
cold, sun-bright realm. The soft glow chased away thick slices of
darkness. The way to proceed from this intersection was clear to
him.

This was the direction of the possessed one’s
work and he was due there soon. The route led him to a
daylight-filled bay. Dhoran squinted, turned his gaze away from the
cursed brightness, and grimaced when his vision cleared.

He didn’t know which was worse, blinding
white snow or brilliant sunlight. Warm firelight suited him. The
way a fire’s warmth encircled him and muted flames danced against
the dark.

This information took a moment to filter
through a shared mind, a side effect of the recent possession that
would soon pass.

Dhoran nodded. The knowledge that these
sleek, white forms were warring aircraft, accompanied by a feeling
of awe and respect, came from the buried psyche locked away in a
prison of flesh. He stopped and stared at the cold deadly force
before him. His thoughts turned to Tourani’s daughter. He was
anxious to find the girl and begin his conquest of her and
Arranon.

From around the closest fighter, a petite
female in a heavy white jacket, pants, and boots emerged. Long,
curly red hair surrounded her face and draped her shoulders. Dhoran
tipped his head and studied her.

Odd, she doesn’t wear her hair in the
traditional style of Arranon, clasped at the back of her neck. The
color. The curls. This too is unusual
.

Recognition of the female caused a flow of
admiration and gratitude from the host’s mind.

Ah, she is not Arranon. She is from Korin.
Erynn Yager. She is important to Arranon, though. A pilot
?

“She’s only a child. And an outsider,” Dhoran
scoffed in a low, menacing voice. He remained unimpressed as he
studied her.

How could one so young be this
accomplished, this distinguished
?
Why is she here
?

Turned in profile to Dhoran, Erynn gazed up
from the green glow of the device she held. Ice-blue eyes
brightened under long lashes. She smiled at a dark, powerful young
man approaching her from the far side of the hangar.

More information surged from a collective
base of knowledge.

There is something familiar
—

He spun toward the exit.

I must find out more about her

For now, he was due at his duty station.

Being late may bring up difficult questions,
and that is no way to start my first day as a human surface
dweller

CAPTAIN ERYNN YAGER PLUMMETED, DIVING
straight down. The smooth gray-green surface of the water rushed up
at her like a brick wall. Popping blue static swirled over the
sleek silver-white body of the Interceptor fighter in response to
her delight. A blaring alarm sounded without pause through the
cockpit and into her headset, intruding on her elation. Electric
tendrils of snapping currents coiled around Erynn’s gloved hand
holding tight to the stick and wound up her arm. A bright red light
on the control panel flashed, reflecting an eerie maroon glow off
the darkened visor of her helmet.