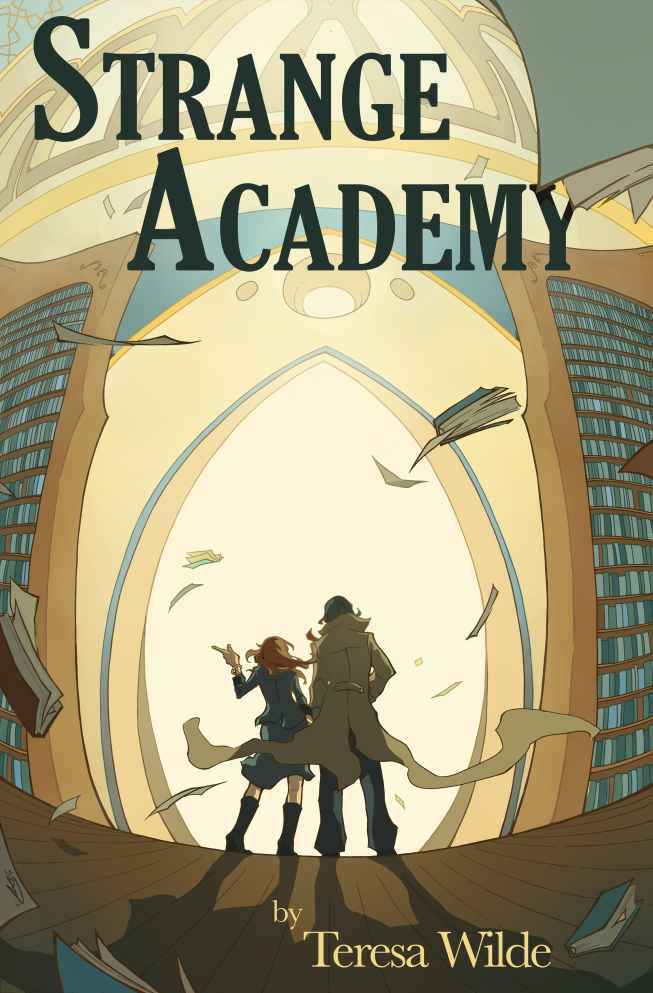 This book is dedicated to Sheryl Kaleo. It’s been a long time coming.

Sheryl, I can’t express to you what a support you’ve been to me: awesome critiques, all-day IM sessions, arguments over Robert McKee, and weepy phone calls.

You’re part of the reason that
Strange Academy
is getting out there.

Thanks for everything. Don’t go away, okay?

Things went wrong with you and me, but now you’ve got a chance to set them right—I’ll help as much as I can, but I don’t really know how much, as I’ll be dead.

When Dr. Cross calls, take his offer. At least this will solve your money problem, even if it delays your Ph.D. And causes a few other teensy issues...But you’ll take care of those. Even the poisoned apple.

I won’t see you at the funeral (my eyes will be closed), but we’ll meet again soon after.

P.S.: Is anyone courting you right now? I hope not. It’s best things don’t get too complicated.

She’s finally gone batty
. Sadie Strange scowled at the medieval handwriting on her eccentric aunt’s letter and reached for her phone, intent on calling Pippa and finding out what the crap she was talking about. Mom had just been talking to Pippa and said she’d just gotten a perfect check-up from the doctor. Why would she think she’d be dead?

And who was poisoning apples?

Sadie reached for the secondhand rotary dial phone that still worked perfectly well, thank-you-very-much, but she missed, sending a stack of unpaid bills sliding to the yellowing linoleum floor of her student apartment.

Before the papers stopped fluttering, the phone rang.

She blinked at the phone, a little creeped out. The feeling faded, leaving embarrassment behind, and she laughed at herself. Even if it was this Dr. Cross calling, it didn’t mean her sweet but loopy aunt could foresee the future.

She picked up the receiver and said hello to whoever it was.

“Sadie. It’s your mother.” After twenty-eight years, of course she could recognize her own mother’s voice and felt like saying so, but the voice trembled, so she swallowed her sarcasm.

“Something going on, Mom?”

Her mom let out a deep breath. “It’s Pippa.”

Coming to you live from Radio R.A.G.E.
, thought Sadie. Through the dark wood door of the principal’s office, she heard the angry father’s voice drift in and out like an FM station on the edge of transmission range. He broadcast his fury loud and clear as he ripped into Principal Cross for hiring the wrong English teacher.

She narrowed her eyes as she looked at the waiting room. No matter how hard the snobs tried, she wouldn’t let them intimidate her with their mahogany furniture and high ceilings and velvet curtains with silken tassels. They’d had gothic architecture and superiority complexes at the University of Toronto, too. Never stopped her before.

Only sheer will kept her from leaping out of the waiting room chair, barging into the office, and taking a piece out of the interfering father. In the post-Fabian era, she no longer took this kind of crap from men. She’d worked too hard to build up her confidence to let a stuck-up elitist get to her. But she did have to make a good impression on her new boss, so she had to suck up these insults.

“...not one of us...”
Speakerphone
. That would explain the hazy quality of the conversation. “...poking around...”

Sadie tried to catch the eye of the middle-aged secretary, but only caught the blue reflection of the computer screen on her glasses.
Must take dictation, type sixty words a minute, and be highly trained in ignoring uncomfortable situations
. The only other occupant of the room was a Wednesday Addams clone swinging her legs over the edge of her chair and looking as miserable as Sadie felt.

Sadie had expected politics here, but she’d also expected to have time to shower before having to defend herself. After sitting for the seven-hour drive from Toronto to a remote private school an hour north of Montréal, she wanted to jump up and pace the ivy-leaved carpet. She was grungy and exhausted and needed to massage blood back into her aching ankles. Why had it seemed like a good idea to drive in a thrift store suit and pinching heels?

Her ears filled with pressure.
Weird
. The hill she’d driven up must be higher than she imagined.

From an enormous oil painting, a pair of gold-tinged eyes scowled down from a wrinkly male face lacking all human feeling.
Quinlan Strange
, said the brass plaque.
Our Illustrious Founder
.

Hide all the secrets you want,
she thought.
The mystery of Aunt Pippa’s death won’t stay a mystery.
Still, his glassy eyes gave her the creeps.

“...security of this establishment...be removed.”

Security
?
Removed
? Apprehension jolted through her. Did the Mafia send their kids to private boarding schools north of Montréal these days?

A sudden bang sent her leaping from her chair, head swinging around, searching for the gun-wielding Mob hit man. But it was only the door to the principal's office, flung open so hard it shook on its ancient hinges. She flattened her palm against her polyester blouse to calm her pounding pulse.

Through the office door stepped the hottest man she’d ever seen. Under her hand, her pulse seemed to stop.

He turned and his gaze latched onto her. A  carnivorous, smile spread across his face, making her toes curl. He was a world tour. Island sun skin. Imperial Roman nose. Intense granite eyes.

Thick and black desert sheikh hair. She reminded herself she didn’t like long hair on men. But damn, those dark waves leaking over his collar looked good. They would look even better with her fingers in them. She resisted the urge to fan herself, Scarlett O’Hara style.

Fabian had given her the vapors, too, before
The Incident
. Her back stiffened. Her perceptions told her His Hotness was pure gorgeousness. Therefore, he must be pure evil.

“Gray, Pippa was very specific. She predic—” Some other guy walked out of the principal’s office talking, but froze when he saw her. It must be Principal Cross. To her surprise, the blond man wasn’t the seventy-year-old she’d imagined from his voice on the phone. He wasn’t more than thirty and was probably very attractive. Hard to tell with His Hotness so close.

She couldn’t stand around gaping at the male scenery; this wasn’t grad school. She was damn well going to fit in here. Long enough to get the truth about Pippa’s death, anyway.

Dr. Cross looked her up and down, blinking in confusion. His Hotness had a good long look, too, but with pure male appreciation that she felt bubbling up her spine.

“You have to be Miss Strange,” said Dr. Cross. “You look like your aunt in her younger days. I feel I know you already.”

“Was she your teacher?” she asked.

“When you went to school,” she explained. “Otherwise, I don’t know how you could have known her in her younger days. Did you go to school with my sister Chloë?”

“Of course.” His words slipped out too quickly, like they’d been greased. “Welcome to the Quinlan Strange Academy for Exceptional Children. I’m Dr. Cross. Christian, when the students aren’t around.”

She shook his offered hand. Everything he said made sense. So why did Dr. Cross set off her B.S. detector? The internal Geiger counter she’d developed as Dr. Timothy’s assistant, to warn her when undergrad “research” bordered on fiction, screamed that Christian was lying.

His Hotness smiled at her and she could have sworn something warm stroked the back of her neck.

“Introduce
me
, Cross,” said His Hotness.

Her blood crusted with ice, like a river in January. Not a speakerphone.
This
voice had just demanded Dr. Cross fire her. As if The Fabian Incident wasn’t enough, here was proof her perceptions had lied again. Not beautiful.
Bad
.

“Lorde, with an ‘e’ on the end,” Lorde Gray interrupted. When he spoke, the imaginary caress of her nape intensified. The rhythmic stroking made her pleasantly drowsy.

What a strange name. Though, of course, she couldn’t point fingers. Her own name was strange on a couple of levels.

“Sadie is Pippa Strange’s niece, here to fill her position in the English Department.” Dr. Cross went on exactly as if Lorde Gray hadn’t just tried to get her fired.

She swallowed and she extended her hand, regretting it in advance and anticipating the worst.

Of course, the worst happened as bare skin met bare skin. Every nerve in her body went live. The electricity generated could have lit a small city. Two of his fingers circled small caresses on the pulse point in her wrist, activating the charge. Gray smiled again, right up to his incisors, and something got all warm and liquid in her insides. He smelled like cinnamon. A man who smelled like cinnamon couldn’t be bad. She felt herself starting to smile back...

She snatched her hand away. The jerk smiled to her face and stabbed her in the back. She slapped the imaginary hand from her neck and frowned when chill air replaced the warmth.

Kill me now. She had to work with him.
Eye, don’t twitch
, she willed.
Don’t twitch, eye.

“I’m also an alumni. Why is your eye twitching?” asked Lorde Gray.

Dammit
. Her hand flew up to cover her left eye. “It’s, er—” Her stress tic. “Nothing. Just something in my eye.”

Gray’s eyes lit from within. Nice eyes. Really nice eyes. No. No, she reminded herself, shaking the last of the hypnosis from her brain. Horrible eyes. Scheming, devious eyes.

“Why is the sign on the gate wrong?” she blurted. Anything to stop the two men from trying to stare through the hand covering her tic.

“Considering it predates Columbus’s discovery of the New World, I doubt the Academy was founded in 1318,” she pointed out.

She stayed armed. “For a hundred and eighty-seven years?”

“Funny.” She didn’t laugh. “There’s some construction on campus—”

“Aquatic center,” Dr. Cross interrupted. “Have you coached? The swim team will need a coach. When we get a swim team.”

He was trying to distract her. Her curiosity piqued. “And the copper roof on the library must have just been replaced. It hasn’t turned green yet.”

“Did you know they pour horse urine on it to speed the oxidization process? What’s the chemical reaction there, Gray?”

“Yet you claim the place has no money.” She realized she sounded like a character in an Agatha Christie novel. At least Miss Marple always got her man.

The Bloodwater Mysteries: Skullduggery by Hautman, Pete/Logue, Mary
Resolution (Saviour) by Jones, Lesley
Dom Wars: Round 6 by Lucian Bane, Aden Lowe
Celtic Sister by Pentermann, Meira
I Could Pee on This by Francesco Marciuliano
Novel 1954 - Utah Blaine (As Jim Mayo) (v5.0) by Louis L'Amour
Where Have All the Bullets Gone? by Spike Milligan
When He Was Bad by Shelly Laurenston, Cynthia Eden
The Dom With a Safeword by Silverwood, Cari, Shaw, Leia, Black, Sorcha
Zoe's Blockade (Destiny's Trinities Book 5) by Tracy Cooper-Posey
Our partner