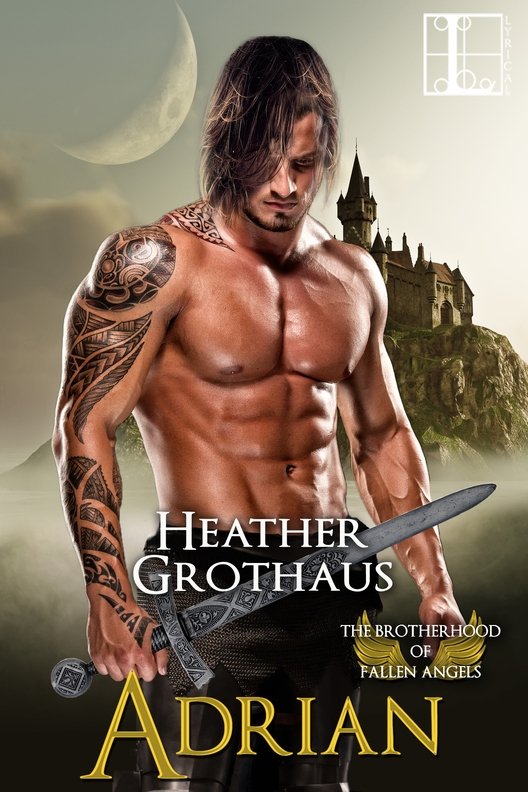 TEMPTING ADRIAN
“Were you jealous because you thought I was in love with him? Because you thought I wanted to make love with another man before you?”
Adrian growled deep in his throat. “Yes,” he hissed. “I was mad with jealousy. I still am,” he said in a warning tone.
Maisie leaned forward and kissed his lips gently. “The only man I want to make love withâhave ever wanted to make love withâis you. And that is the truth, if ever I've spoken it. If you'll only take me inside, I shall prove it to you.”
Adrian released her to sweep his arm beneath her legs and then turned to maneuver her through the narrow doorway . . .
Books by Heather Grothaus
Â
Â
THE WARRIOR
THE CHAMPION
THE HIGHLANDER
TAMING THE BEAST
NEVER KISS A STRANGER
NEVER SEDUCE A SCOUNDREL
NEVER LOVE A LORD
VALENTINE
ADRIAN
HIGHLAND BEAST
(with Hannah Howell and Victoria Dahl)
Â
Â
Â
Published by Kensington Publishing Corporation
ADRIAN
The Brotherhood of Fallen Angels
Heather Grothaus

The sound of ragged sobs stirred Adrian from the depths, and as he became aware of the cold stone beneath his cheek, he realized he was the source of those sobs.
His voice, cawing and raw, echoed as he writhed on the stone floor. Every inch of skin, every muscle, screamed as if they had been painstakingly scored with glowing iron. He tried to tilt his head back as he cried out again, to relieve the drawing torture on the back of his neck and spine, but he felt a wide cuff of iron dig into the base of his skull. His cry intensified.
“Adrian,” a muffled voice called. “Adrian, stop. You must get hold of yourself.”
Adrian thought it was perhaps Constantine who spoke, and so he tried mightily to quiet, to still, so that he could locate his friend. His cries retreated back into his throat, but he could not help the whimpers that escaped him, like dogs straining at their leads. His whole body trembled with such pain that he could not understand how he still lived.
“That's it,” the voice said again, perhaps somewhere behind him. Adrian's ear canals seemed to be swollen together, muting the sounds around him but amplifying the sluggish rush of blood in his skull. “Move beyond it. Can you open your eyes? Come outside yourself.”
Adrian tried to raise his eyelids, but they felt melted shut. Increasing the effort brought another round of jagged sobs, but he was rewarded with a sliver of light that made him cry out again in earnest. He felt thick wetness running down his forehead, his cheeks. He didn't know if it was blood or sweat, although he doubted the latter, as he felt as though he was in the midst of a blizzard.
Constantine?
Adrian tried to say his friend's name, but all that came out was a moan of which the effort and sound pained him so that he began to weep again.
“Get hold of yourself, Adrian!” Constantine demanded, using every nuance of his military tone. “You must not surrender to it. You must fight! If you don't, you shall die.”
It was his friend's last statement that brought Adrian some measure of stillness. He could not see the extent of his injuries, and he knew in some part of his fevered mind that he was only feeling a fraction of the damage that his body was suffering, but he realized that he was only hanging on to life by a fingertip. He could quiet, and then just let the pain slip away. His heart would stop beating, his pupils would contract a final time, and then Adrian Hailsworth, master architect, would simply cease to exist.
He would never again see his brother, or his father. He would never again stride through the green grass of Hereford on his visits home from his travels. He would never see the completion of the great bridge in London, the plans of which he himself had helped conceive before accepting the ill-fated charge of the great fortress Chastellet. It was to have been his final project before taking the position in Oxford, teaching generations of fresh young minds the truth about the world around them, and shining light into the darkness of superstition and myth that gripped the populace of his country.
Now that bright dream, along with his weak physical body, was flickering.
“That's right.” Constantine's voice broke into his dimming thoughts once more. “Be still. Conserve your strength. You are gravely injured, it is true, but now Saladin will preserve us until we can be ransomed or traded. King Baldwin will not forsake us. We must have faith, Adrian.”
While Constantine launched into a murmuring plea to an imaginary creator, Adrian let his friend's hopeful words reach his muddled consciousness. Ransom? Why did that sound false to his ears?
How convenient for Baldwin that we have his traitor in our captivity. He will not live long enough to be bought.
The king would be told that Constantine was the traitor of Chastellet. Perhaps the news had already spread. There would be no ransom.
But Constantine would never know that if Adrian let himself die.
Adrian tuned his ears to the sounds around him again, hearing Constantine's murmuring prayer for Adrian's failing body, for the preservation of Constantine's son and wife, awaiting what was to have been their father and husband's imminent return to England. He fought to crack open his eyes once more.