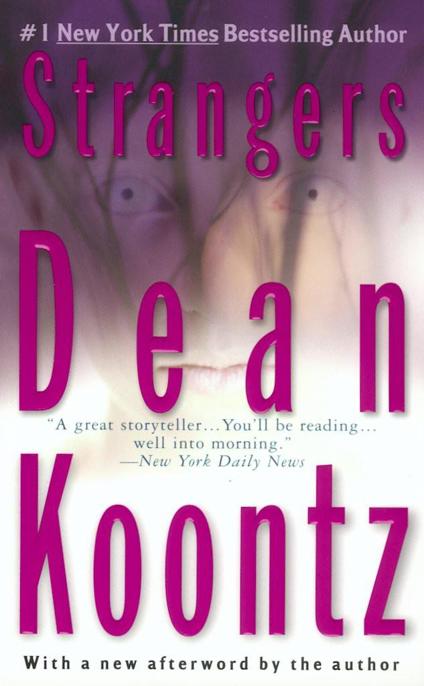 “[Koontz] is a great storyteller, and
Strangers
features a plot so original you’ll be reading, with chills, well into morning.”

“A unique spellbinder that captures the reader on the first page. Exciting, enjoyable, and an intensely satisfying read.”

“I found the novel tough to put down, except when making sure that the doors and windows were securely locked.”

“
Strangers
is the best novel he has written. It’s full of suspense, excitement, and weird situations.”

“Dean Koontz is a master storyteller, building suspense page by page, episode by episode. He has absolutely amazing knowledge of his subject matter, whether it be religion, military weapons, medicine, or an understanding of human nature.
Strangers
is absolutely enthralling.”

“An almost unbearably suspenseful page-turner. His ability to maintain the mystery through several plot twists is impressive, as is his array of believable and sympathetic characters.
Strangers
may be the suspense novel of the year.”

“Koontz has outdone himself this time.
Strangers
is so hauntingly beautiful that it should catapult him into the ranks of the great American authors.”

“Terrifying and compelling. Koontz is especially adept at creating believable characters. He is also surprisingly good at weaving a horribly complex tale and resolving it into a simple but wonderful conclusion.”

“A spellbinding tale. You won’t put this one down until you’re finished.”

“A gripping story, skillfully crafted to keep the reader strung out on suspense.”

THE EYES OF DARKNESS

THE KEY TO MIDNIGHT

THE HOUSE OF THUNDER

THE VOICE OF THE NIGHT

THE SERVANTS OF TWILIGHT

THE FACE OF FEAR

PUBLISHED BY THE PENGUIN GROUP

The Library of Congress has cataloged the G. P. Putnam’s Sons hardcover edition as follows:

To Bob Tanner,
whose enthusiasm at a crucial stage
was more important than he can know.

Part One: A Time of Trouble

A faithful friend is a strong defense.

A faithful friend is the medicine of life.

A terrible darkness has fallen upon us,

but we must not surrender to it. We shall

lift lamps of courage and find our way

through to the morning.

—Anonymous member of the French Resistance (1943)

Dominick Corvaisis went to sleep under a light wool blanket and a crisp white sheet, sprawled alone in his bed, but he woke elsewhere—in the darkness at the back of the large foyer closet, behind concealing coats and jackets. He was curled in the fetal position. His hands were squeezed into tight fists. The muscles in his neck and arms ached from the tension of a bad though unremembered dream.

He could not recall leaving the comfort of his mattress during the night, but he was not surprised to find that he had traveled in the dark hours. It had happened on two other occasions, and recently.

Somnambulism, a potentially dangerous practice commonly referred to as sleepwalking, has fascinated people throughout history. It fascinated Dom, too, from the moment he became a baffled victim of it. He had found references to sleepwalkers in writings that dated as far back as 1000
B.C.
The ancient Persians believed that the wandering body of a sleepwalker was seeking his spirit, which had detached itself and drifted away during the night. Europeans of the grim medieval period favored demonic possession or lycanthropy as an explanation.

Dom Corvaisis did not worry about his affliction, though he was discomfited and somewhat embarrassed by it. As a novelist, he was intrigued by these new nocturnal ramblings, for he viewed all new experiences as material for his fiction.

Nevertheless, though he might eventually profit from creative use of his own somnambulism, it
was
an affliction. He crawled out of the closet, wincing as the pain in his neck spread up across his scalp and down into his shoulders. He had difficulty getting to his feet because his legs were cramped.

As always, he felt sheepish. He now knew that somnambulism was a condition to which adults were vulnerable, but he still considered it a childish problem. Like bed-wetting.

Wearing blue pajama bottoms, bare-chested, slipperless, he shuffled across the living room, down the short hall, into the master bedroom, and into the bath. In the mirror, he looked dissipated, a libertine surfacing from a week of shameless indulgence in a wide variety of sins.

In fact, he was a man of remarkably few vices. He did not smoke, overeat, or take drugs. He drank little. He liked women, but he was not promiscuous; he believed in commitment in a relationship. Indeed, he had not slept with anyone in—what was it now?—almost four months.

He only looked this bad—dissipated, wrung-out—when he woke and discovered that he had taken one of his unscheduled nocturnal trips to a makeshift bed. Each time he had been exhausted. Though asleep, he got no rest on the nights he walked.

He sat down on the edge of the bathtub, bent his leg up to look at the bottom of his left foot, then checked the bottom of his right foot. Neither was cut, scratched, or particularly dirty, so he had not left the house while sleepwalking. He had awakened in closets twice before, once last week and once twelve days prior to that, and he had not had dirty feet on those occasions, either. As before, he felt as if he had traveled miles while unconscious, but if he actually had gone that far, he had done it by making countless circuits of his own small house.

A long, hot shower soaked away a lot of his muscle discomfort. He was lean and fit, thirty-five years old, with recuperative powers commensurate with his age. By the time he finished breakfast, he felt almost human.

After lingering with a cup of coffee on the patio, studying the pleasant geography of Laguna Beach, which shelved down the hills toward the sea, he went to his study, sure that his work was the cause of his sleepwalking. Not the work itself so much as the amazing success of his first novel,
Twilight in Babylon,
which he had finished last February.

His agent put
Twilight
up for auction, and to Dom’s astonishment a deal was made with Random House, which paid a remarkably large advance for a first novel. Within a month, movie rights were sold (providing the down-payment on his house), and the Literary Guild took
Twilight
as a main selection. He had spent seven laborious months of sixty-, seventy-,
and eighty-hour weeks in the writing of that story, not to mention a decade getting himself
ready
to write it, but he still felt like an overnight success, up from genteel poverty in one great leap.

The once-poor Dominick Corvaisis occasionally caught a glimpse of the now-rich Dominick Corvaisis in a mirror or a sun-silvered window, saw himself unguarded, and wondered if he really deserved what had come his way. Sometimes he worried that he was heading for a great fall. With such triumph and acclaim came considerable tension.

When
Twilight
was published next February, would it be well received and justify Random House’s investment, or would it fail and humiliate him? Could he do it again—or was
Twilight
a fluke?

Every hour of his waking day, these and other questions circled his mind with vulturine persistence, and he supposed the same damn questions still swooped through his mind while he slept. That was why he walked in his sleep: he was trying to escape those relentless concerns, seeking a secret place to rest, where his worries could not find him.

Now, at his desk, he switched on the IBM Displaywriter and called up chapter eighteen on the first disk of his new book, as yet untitled. He had stopped yesterday in the middle of the sixth page of the chapter, but when he summoned the document, intending to begin where he had left off, he saw a full page where there had been half. Unfamiliar green lines of text glowed on the word processor’s video display.

For a moment he blinked stupidly at the neat letters of light, then shook his head in pointless denial of what lay before him.