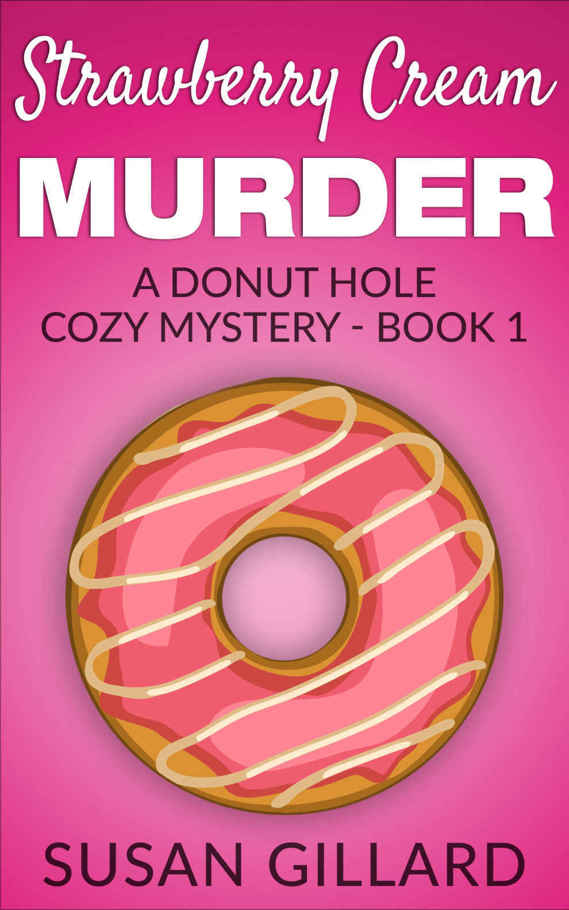 Thanks for your purchase!

Disclaimer: This is a work of fiction.
Names, characters, businesses, places, events and incidents are either the products of the author’s imagination or used in a fictitious manner. Any resemblance to actual persons, living or dead, or actual events is purely coincidental.

All rights Reserved. No part of this publication or the information in it may be quoted from or reproduced in any form by means such as printing, scanning, photocopying or otherwise without prior written permission of the copyright holder.

Every two weeks you’ll get a new Cozy Novella from me absolutely FREE.

“I’ll take a dozen glazed and a dozen chocolate with sprinkles, please.”

Heather smiled at the customer standing across the glass display case from her.  Even though her shop specialized in gourmet donuts, she still made sure to stock the old favorites.  She reached under the counter for one of the flattened cardboard boxes they used for to-go orders and, with an ease that came from years of practice, assembled it by pulling the sides of the box upright and locking the tabs into their slots.

Not that she usually worked the early shift at Donut Delights.  That was the advantage of being the owner; you could hire people to get up at 3:00 a.m. and arrive at the shop by 4:00 to start baking while you slept in.  Usually, Heather got there around 10:00.  But today, she had decided to come in at 8:00, in the hopes that staying busy with the rush of early morning customers would keep her mind off of—

Heather clenched her teeth and forced herself to focus on each lusciously glazed donut as she placed it into the box.  One…two…three…

She finished with the glazed and chocolate-with-sprinkles customer and turned to the next customer in line.  “What can I get for you today?”

“Oooooh,” the woman said, “I just don’t know.  Everything looks so delicious.”  She pointed at one of the trays displaying donuts.  “What kind are those?”

“Those are Southern Pecan Pie donuts,” Heather said.  “The donut itself is a little heavy, but not cake-y.  Has a little bit of the texture of a pie crust.  It’s filled with the same kind of filling used in pecan pies, and topped with more filling and halved pecans.”

“I’ll take half a dozen of those,” she said.  “Ohhhh, my waistline.  But it’ll be worth it.  Let’s see, I need another half dozen of something.  What do you recommend?”

“How about the Lemon Meringues?  Light donut base with lemon filling.  Topped with lemon glaze, crust crumbles, and plenty of meringue.”

Heather smiled, boxed up the customer’s order, and rang up the transaction.  When the woman was on her way happily out the door carrying two boxes, Heather grabbed a coffee pot and went out into the dining area to refill customers’ cups.

She stopped first at the table right in front of the big, bay window, as she always did.  The tiny, elderly woman with the silvery white hair smiled at her, and she topped off the woman’s cup with a smile of her own.  “How are you today, Eva?” she asked.

“You never complain,” Heather said.  “You’re a ray of sunshine every single day.”

It was true.  Eva Schneider came to Donut Delights each morning, ordered a different gourmet donut and a cup of coffee, then took the same table by the window, if it was available.  Always with a smile on her face, she never gave much information about herself.  But she was always eager to listen, and Heather sometimes felt selfish when she found herself doing most of the talking.

The bell above the door jingled, and Heather looked up to see another customer enter the store.  She almost glanced away—customers came in and out all the time—but then, she noticed the gun in a holster on his hip and the shiny silver badge right next to it.

Heather realized she was staring and returned her gaze to Eva’s pleasant face.  Well, she thought, cops eat donuts too.  Of course they do.  Everyone knows that.

But as Heather headed for the counter, Officer Whatever-his-name-was spoke to her.  “I’m looking for Heather Janke,” he said.  “Is she in?”

“I’m Heather,” she said, frowning.  “Can I help you with something?”

“Do you have an office where we can talk?” he asked, glancing toward the back of the shop.

“Right this way,” Heather said, turning toward the kitchen.  “Michelle, can you take over the counter?”

As Michelle hurried forward, wiping her hands on a dish towel, Heather led the detective toward her little office that was tucked in the back corner of her shop.  She opened her office door and stood aside so he could enter, but he gestured her forward.

Heather stepped inside and took a seat in her desk chair.  “May I close the door?” the detective asked.  Heather nodded, and he closed the door and sat down in the only other chair in the office, a decorative faux-wrought iron chair she’d pulled in from one of the tables up front.

“Ms. Janke, I’m Detective Ryan Shepherd of the Hillside Police Department,” he began.  “I’m investigating an incident that took place last night.  Do you mind if I ask you a few questions?”

“I guess not,” Heather said, reaching for a strand of her long, curly red hair and twisting it around her finger.  “Am I a suspect or something?”

“Have you done anything illegal lately?” Shepherd asked.

“Noooooo,” Heather said slowly.  Did he think he was being funny?

“Then you have nothing to worry about,” he said.  “First question.  Did you know Christa Fordyce?”

“Of course I know Christa,” Heather said, feeling the urge to clench her teeth again.  “She worked here until last week.”  She paused, waiting for a niggling detail to catch up with her.  “Wait a minute, did you say ‘
Did
I know her?’  As in, past tense?”

“Christa Fordyce was found dead last night around 9:30 in her shop,” Shepherd said.

“Quite sure,” Shepherd said.  “I hear there was no love lost between the two of you.”

“Where did you hear that?” Heather demanded.

“How about I ask the questions?” the detective suggested.

“Okay, fine,” Heather admitted, throwing her hands up.  “I trained Christa in the donut business.  I taught her everything I know.  I even shared my proprietary recipes with her.
Secret family recipes
, I might add.  And she took everything she learned and went behind my back and set up her own shop, which was supposed to open tomorrow.”  Heather paused and took a deep breath.  “I guess you probably already know all that.”

He nodded.  “Second question: Do you know whether or not Ms. Fordyce had any allergies?”

“When Ms. Fordyce was found, there was a half-eaten strawberry cream donut next to her.  She had what looked like donut crumbs in one corner of her lips.  There were no obvious signs of violence.”

“Christa wouldn’t have donut crumbs on her lips,” Heather said.  “She was too neat.  Almost fastidious.”

Shepherd raised an eyebrow.  Heather noticed a tiny scar just below it and wondered how he got it.

“Actually, she did,” Shepherd said, pointing to the left corner of his mouth.  “Right here.”

Heather sighed and forced herself not to roll her eyes.  “Where was she found?  Can you tell me that, at least?”

“Next to one of the tables in the front of the shop.”

“Christa would never carry a donut she was eating into the customer area,” Heather said.  “That’s not
her
.”

The detective flipped open a small notebook and glanced at it, apparently deciding not to argue the point.  Or maybe simply dismissing her.

“Who found her?” Heather asked.

“Her assistant, a guy named Joey—“ Shepherd flipped a page in the notebook.  “Joey Gorham.”

Heather shook her head.  “I don’t know him.”

“No reason you should,” Shepherd said.  “He hasn’t been in town long.  But apparently he and your former assistant go way back.  Used to date.  She never mentioned him to you?”

“William Edwin Fordyce the Third,” Heather offered.  “Billy.  The heir apparent to the family fortune—if he could stay out of rehab long enough.”

“How many times had he been to rehab?”

“When was the last time he was in rehab?”

“He got out a couple months ago, I think,” Heather said.  “Right about the time I fired Christa.”

“I told you she stole my recipes, took everything she learned, and opened a shop of her own,” Heather said.  “Or at least, it was supposed to open today.  I guess it won’t, now.”

“Guess not,” Shepherd said. “And you didn’t find out about this until two months before the grand opening?”

“It was on the other side of town, and I’m not over there that much,” Heather said.  “Christa somehow kept it a secret until one day, she and I were both working here, and one of our customers—one of
my
customers—said, ‘Hey, aren’t you the same lady I saw at that other donut shop?  The one by the park where the sign was going up?’  And I’m like, ‘What donut shop by the park?’  And Christa was just standing there with this deer-in-the-headlights look.  So the customer says, ‘I just thought maybe you worked both places.’”  Heather snorted.  “Turns out she
was
working both places.”

“Must have been a shock,” the detective said, flipping his notebook closed and sliding it back in a pocket.

“Must have made you angry,” he said.

“Thank you for your time, Ms. Janke,” Shepherd said, standing up and pulling a small, white rectangle from his wallet.  “Here’s my card.  Call me if you think of anything.”

“I hope you got whatever it was that you think you were looking for,” Heather said, tossing the card into a desk drawer and sliding it shut.

Shepherd paused, his hand on the doorknob.  “Oh, I did,” he said.  “By the way—you don’t have any plans to leave town any time soon, do you?”

Shepherd gave her a polite smile, pulled the door open, and was gone.