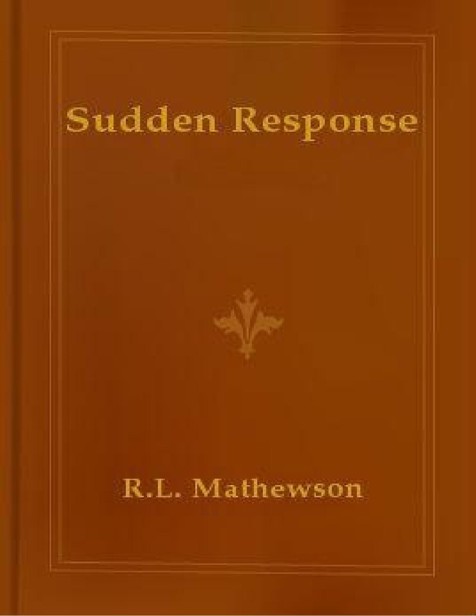 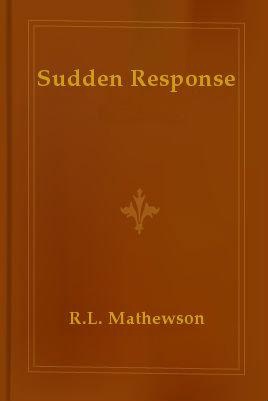 This is a work of fiction. A ll of the characters, organizations and events described in this novel are either products of the

author's imagination or are used fictitiously.

Other books by R.ll. Mathewson:

Without Regret: A Sentinel Novel

Playing for Keeps: A Neighbor From Hell Novel

Perfection: A Neighbor From Hell Novel

This book is dedicated to all the men and women who put their lives on the line in our time of need. It doesn't matter if you

A s always a special thank you to Rhonda Valverde and all my forum buddies at http://www.vampireromancebooks.com A nd

of course to my children who will always be my inspiration and my little buddies.

even if you do frighten me from time to time.

“Fresh meat,” Eric read the sign with a chuckle as he pulled his light blue uniform shirt on over his white tee shirt. “I guess you

The man nodded frantically as Eric looked over the boys’ recent work. They had Greg strapped to a long board in nothing but

on the man’s stomach. To top it off they leaned Greg against the chain link fence with the sign tapped across his hips for the

Eric put his bag down on the sidewalk and worked on tidying his uniform. “The name’s Eric. I’m really sorry about this, Greg.

I meant to get here sooner, but I got a little held up.”

Greg tried to shrug against his restraints.

“I gotta tell you that I’m a little embarrassed to work with these guys.” He gestured to Greg’s predicament. Greg nodded

slightly. “So juvenile.” He shook his head in disgust and bent down in front of Greg. Greg tried to look down to see what Eric

was doing, probably hoping that he was getting a pair of scissors to cut him down.

Eric stood up with an aerosol can in his hand, absently shaking it. “I tell the boys if they’re going to do something, do it right

We take a lot of pride in our work around here, but this,” he gestured lazily towards Greg, “has amateur written all over it. I’m

sorry, Greg, but I have a reputation to protect.” With that Eric sprayed green spray-paint on Greg’s brown hair.

A fter a few minutes Eric stepped back to examine his work. “Hmm, better, but not quite what I’m looking for.” He shook his

head and bent down to retrieve something else from the bag. This time he stood up holding a red marker.

Greg watched as the marker came closer to his face until his eyes crossed. He felt the pen press against the tape covering his

lips. He looked up to see Eric smile. “There, that’s much better.” He stepped back to examine his work. The green hair and full

pouty red lips worked for him.

He picked up his bag and gave Greg a smile. “Welcome to the 707, Greg. I’m your training officer tonight. I’ll see you inside.”

Eric walked away while Greg tried to scream against the tape.

Eric walked into the fire house. “What’s up, Eric?” a man asked.

“Not much.” He made his way upstairs to find the rest of the men watching the game.

“Eric!” they shouted in unison.

“Gentlemen, I see you greeted my third rider," a new EMT who rode along on a shift to train, "Very disappointing work,

gentlemen, very disappointing,” he said, shaking his head in disgust.

Ethan ran a hand over his bald head as he said, “Come on, man, we had to rush it. The game was coming on.” Eric looked at

the large television. The Yankees were playing Boston at Fenway. “Sorry, my apologies.” He held up his hands and made his

way back to the sleeping quarters. He walked to the last room on the right and threw his bag on the bed to the left. The one to

the right was empty, letting him know his partner wasn't here yet. He would make the bed later. That is if it was a slow night

otherwise he would be working all night on rig and wouldn't have a chance to grab some sleep.

He wasn’t supposed to be working tonight, but the lieutenant called him at home a few hours ago and asked if he could come in

and train a third rider. Eric jumped at the chance since his social life had been shit for months and he could always use the

“Eric, you have a call!” one of the men yelled.

game. Jeff held his hand over the phone. “A woman, damn she sounds sexy as hell!” He handed the phone over to Eric.

“Hello?” he said, having no clue as to who would be calling him at work.

Eric sighed, looking back at the men, not really all that surprised to see them laughing. He promptly gave them a one finger

salute, eliciting more laughter. His love life was a joke to them. They couldn’t understand how any man could go months

without a girlfriend or at the very least get laid.

“I’m just making sure that you’re coming tomorrow night for dinner. Your brother will be here with his new girlfriend.”

“That’s great, mom,” he said, not really caring at all. This was his mother’s way of bringing up a possible match for him. A

ccording to his mother it didn’t matter that he was a thirty year old man, she had a responsibility to make sure he was happy

and of course to her that meant finding a wife.

“I wanted to tell you about this lovely girl I met at the grocery store yesterday.”

“Oh, Mom, you didn’t,” he said, feeling a headache coming on.

She ignored him and continued. “She’s pretty, single, young and did I mention head cashier?”

“Mom, call her up and cancel. I’m not interested.”

“I don’t see why I should. I offered the poor girl a homemade meal and I intend to keep that promise. Now, since you’ll be here

you can help keep her company.”

“Mom, I might not be able to come tomorrow night. I might have to pick up another shift.” Even as he said it he knew his

mother already dismissed the idea and expected him there.

She sighed into the phone. “I'll expect you by six. Oh, and make sure you tell Joe to come, too.”

“Bye, Mom.” He hung up, wondering how the hell he was going to get out of going.

“So, who was she trying to hook you up with this time?” Jeff asked.

“A cashier,” he muttered, ignoring their laughter. "A nyone seen Teddy?" he asked, wondering where his partner for the night

was. If he wasn't so damned bored he would never have taken this shift.

Working as an EMT was probably the best job he'd ever had. It was great. The hours were good, better than good, the pay was

incredible and every day was new and exciting. The only thing that could really make or break your day besides a really fucked

up call was your partner.

a good time or have you coming to blows. Imagine being stuck in a small box with someone who didn't bathe or worse wore

what seemed like a gallon of cheap perfume or cologne. He'd found himself standing out in the rain, blizzard, or sweltering heat

many times in order to get away from the stench. Worse was being partnered with some annoying asshole or an outright bitch

that you couldn't stand.

He was lucky that his full time partner was also his best friend. They'd been best friends since they were eight. Joe was a hell

Never complained, always had a joke, and was easy to get along with, unlike his partner for tonight. He really lucked out with

Teddy on the other hand was a Class A prick. He hit on anything with breasts and didn't take rejection well. The guy had more

write ups than the entire squad put together, but thanks to the Union he couldn't be fired. Tonight was going to be a true test of

his patience. Besides being an arrogant asshole, the guy didn't know what the hell he was doing and was a lazy bastard. Why in

the hell did he agree to come in tonight?

"Don't get all choked up, but Teddy won't be in tonight. He banged out," Jeff said as he grabbed a bottle of water from the

"No shit?" Eric asked, hoping the man wasn't fucking with him.

"I shit you not. Seems a stripper broke his nose when he tried to ignore the 'no touch' rule," Jeff said, chuckling.

Eric shook his head, laughing. Leave it to that pervert to get his ass kicked by a stripper. "Who am I working with then?"

"Not sure. Bill's been on the phone for the past hour trying to get you someone to work with," Jeff said, leaning against the

"If one of you gentlemen would be so kind as to go release my third rider and tell him to clean up I'll go check out the rig," he

said, heading towards the garage.

"Do we have to?" one of the men whined, making him laugh.

Eric walked over to the board to grab the keys for ambulance seventy-nine only to find the hook empty. No doubt the last crew

left the keys in the ignition, he hoped at least. He walked past several of the box ambulances towards the van style ambulances

and sighed with relief when he spotted ambulance seventy-nine with its back doors wide open.

Whoever his partner was for the night was already in the ambulance checking it out. He walked over and paused when he

spotted the very luscious figure bent over inside his rig. He ran his eyes over the familiar figure and he groaned inwardly. His

eyes went from the long honey blond hair pulled back into a no-nonsense ponytail to the small waist, flared hips and perfect

bottom that was pointed his way.

He couldn't think of a better sight to start the night off with. It was too damn bad there wasn't a chance in hell he would ever

find out how those lush curves would feel beneath him.

"I thought the restraining order stated that you couldn't come within a hundred yards of me?" he demanded.

Joe bit back a smile at the familiar deep voice. He was the only man on earth who could make her smile without fail. It had

always been that way ever since they were kids.

She still remembered the first time she met him. It was her first day in a new school. Her mother, who decided this time was

going to be different, decided to shove eight year old tomboy Josephine, Joe for short, into a overly frilly dress that was too

short and in her opinion too ugly to be seen in public. She'd never been so embarrassed in her life. During recess she tried to

hide from the rest of the kids, but that only managed to draw more attention. When one little boy came over and shoved a