Read Sugar on the Edge Online

Sugar on the Edge 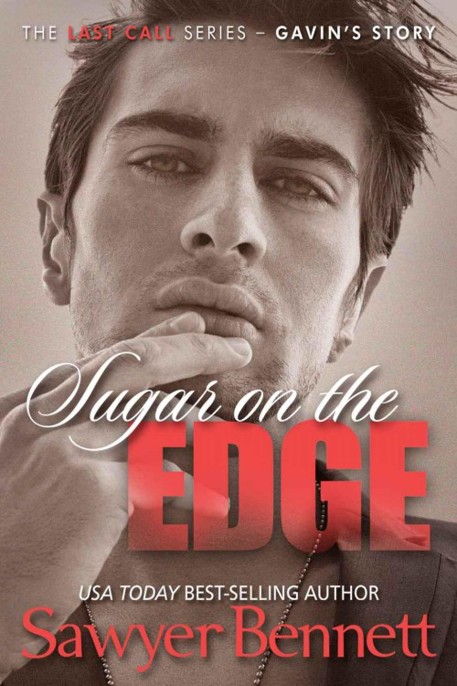 SUGAR ON THE EDGE (The Last Call Series, Book #3)
By Sawyer Bennett

This book is a work of fiction. Names, characters, places and incidents either are products of the author’s imagination or are used fictitiously. Any resemblance to actual events, locales or persons, living or dead, is entirely coincidental.

No part of this book can be reproduced in any form or by electronic or mechanical means including information storage and retrieval systems, without the express written permission of the author. The only exception is by a reviewer who may quote short excerpts in a review.

“And, as you can see here, all the panels of glass slide so you can open the entire back wall to the beach.”

“Not a real handy feature in the winter months,” I grumble under my breath as the woman… my realtor… prattles on about the features of this 2.7 million dollar beach house I just purchased—sight unseen—in Duck, North Carolina. Stupid fucking name for a town, but I’d live with it since the house met all of my requirements.

And there weren’t many. It had to be oceanfront with no other house near it for at least two hundred yards. I like my privacy, so in order to afford said privacy, I had to shell out a shitload of cash to purchase it.

“Excuse me?” I hear from behind me. I turn to see the woman looking at me with her blonde eyebrows arched high. What was her name again? Casey Markham, I think.

“Excuse me what?” I ask, trying to keep my features bland. I’m normally not passive aggressive. In fact, most would call me just aggressive, but I’m hungover as hell and not as combative as normal.

“You just mumbled something. I didn’t hear what you said,” she challenges me. I know damn well she heard what I said but, she wasn’t about to let the smart-ass comment go unnoticed.

“I said,” I drawl out in a strong voice laced with my own special brand of assholery, “not a real handy feature in the winter months. I apologize if you didn’t hear me, but what I meant by that is it’s a pretty fucking stupid feature to have on a house that has cold winter months. I mean… if this house was in the tropics, sure… I get it. But what wazzock installed that knowing it would only be used maybe half the year?”

I’m a prick, I know it, and this woman, Casey, knows it too. I’ve been dealing with her from my flat in London over the past several weeks while she’s diligently tried to find a piece of property to suit my needs. I really don’t give a fuck if I hurt her feelings though; I’ve gotten beyond caring what anyone thinks of me and besides, she’s earned a hefty commission off this sale, so she has no reason to whine.

Rather than stick out her lower lip and pout, she does the opposite instead. She throws her head back and laughs from deep within her chest and suddenly, the woman becomes a bit more interesting to me. She’s beautiful, sure. Long, blonde hair, streaked pale in some areas from the hot, Carolina sun. Perfectly sun-kissed skin and runway model features. Her smile exudes happiness and contentment with her life, sparkling with brilliance. She apparently also has a backbone as well, which is intriguing because that means she’s breakable, not just bendable, and sometimes, I find joy in breaking things.

Still chuckling, Casey shoots me a wink as she walks past me. “I thought the same thing when I saw that. Our summers are very nice here, but we can get some nippy winters, no doubt. Now, let’s go upstairs, and I’ll show you the second level.”

Shaking my head, I follow her up the stairs, definitely eyeing the way her ass sways under the slender, cream-colored skirt she’s wearing. It makes me think about bending her over and fucking her with it hiked up around her waist.

If my head wasn’t pounding and my stomach wasn’t threatening to expel up the half bottle of Scotch I drank last night.

I follow her around, letting her point out the features of the house… zebrawood flooring throughout, five bedrooms, each with its own bath suite, and a third-floor office that has its own private deck overlooking the Atlantic. It came completely furnished, even stocked with pots and pans, so I don’t have to do anything but unpack my suitcase. There’s even an entertainment suite on the basement level that houses a private cinema, billiards room, and fully functioning bar.

The bar is my favorite feature in this house by far.

By the time we make it back down into the kitchen, I’ve pretty much tuned my realtor and her perky, sweet disposition out and start calculating how quickly I can get her out of here. There’s another half bottle of Scotch calling out to me, and be damned that it’s only one o’clock in the afternoon.

“Here are your keys, and congratulations on your new home, Mr. Cooke.”

I look at Miss Casey Markham standing there, holding out the house keys to me, all sunny and bright, and realize it’s not worth trying to get in her pants. My brand of fucking is dark and rough, something a sweet girl like her would never understand.

“Thanks,” I say as I take the keys and pocket them.

I walk her to the door. Once she steps out onto the front porch, she turns to me with a huge, sparkling smile and says, “Is there anything else I can do for you, Mr. Cooke?”

How about a blow job, sunshine?

Yet, her sunny personality is exactly the reason she doesn’t really appeal to me. I don’t like my women smiling, happy, or carefree. I like them quiet and passive, taking what I give them, and otherwise leaving me the fuck alone.

“Nope. I’m good. Cheers,” I tell her and start to turn away to close the door. My last glance at her shows her smile to still be fixed in place, but there’s a hint of a smirk she’s showing that tells me she very much knows I’m a supreme asshole, yet she couldn’t care less. She just made thousands of dollars in commissions off me, and that will keep her in rainbows and unicorns for many months.

After the door closes, I lean back against it and survey my new kingdom. It’s massive… four stories if you include the basement and way more room than any one man could ever hope to possess, or live in for that matter. It’s going to be a bitch to keep clean, and that’s the last thing I’m looking forward to because all of my attention needs to be focused on trying to stay away from the bottle and working on my manuscript, which is due to my editor in two weeks.

Pushing away from the door in a spur of the moment bout of insight, I pull it open and call down to Casey, who has made it to the bottom of my porch staircase. “Wait a minute.”

She turns back around and pastes a pleasant smile on her face. “Yes, Mr. Cooke?”

“It’s Gavin,” I say, tired of the formality, because Mr. Cooke is my father and it makes me feel fifty rather than twenty-seven.

Casey cocks her head to the side in curiosity.

“Do you know of a cleaning service you can recommend that can come in a few times a week?”

She chews on her lip in thought and takes a step back toward the staircase. Looking up at me, she says, “There are a few here in the Outer Banks, but I actually have a friend… my roommate actually… who might be interested.”

Shaking my head, I say, “No, thanks. I’d rather have a professional company.”

Casey’s brows draw inward, and she steps up on to the bottom of the staircase, poising one hand on the bannister, the other sliding into the pocket of her skirt. “She’s really fantastic. She cleans a few other houses on the island. She’s very unobtrusive, and she will do a better job for a better price than the professional companies do.”

“Is she as talkative as you?” I ask skeptically, but what I really mean is she bubbly, perky, and outgoing. “Because I don’t like to be bothered.”

“Quite the opposite. She’s shy and a little withdrawn. You probably won’t even know she’s in your house.”

Drumming my fingers on my thigh, I think about her offer. My gut says to decline and insist on a professional company, because if they don’t work out, there are no awkward feelings if I have to fire them. But then I think… what the fuck do I care if there are awkward feelings? If I don’t like her, I won’t have a single qualm about booting her arse out.

“Okay,” I capitulate. “Give her my contact information and have her give me a ring. I’ll discuss the details with her.”

Golden Afternoon by M. M. Kaye
Warriors Super Edition: Yellowfang’s Secret by Erin Hunter
Marrying Miss Hemingford by Nadia Nichols
Antarctica by Claire Keegan
Shopping for a Billionaire 4 by Julia Kent
Bad Samaritan by William Campbell Gault
Not Quite Mine (Not Quite series) by Bybee, Catherine
The Black Widow by John J. McLaglen
Terms of Surrender by Sheila Seabrook
Olive and Let Die by Susannah Hardy
Our partner