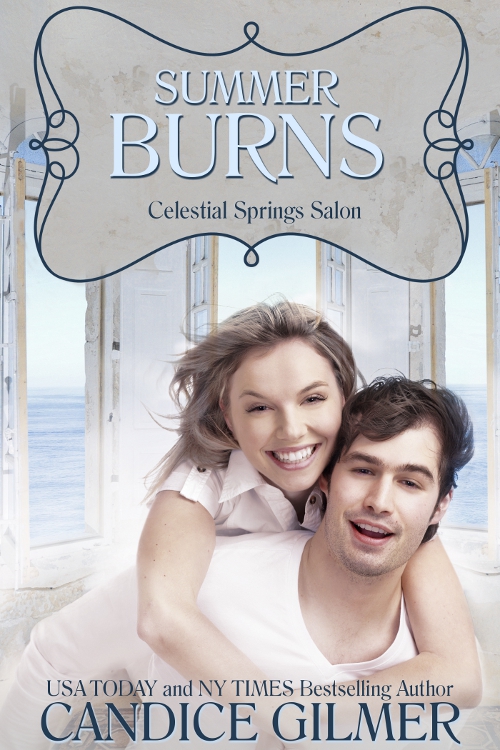 Other Books by Candice Gilmer

The last thing military widow Summer Bettes wants in her life is a new man. Correction, a new military man, though they're all over Barrum, Kansas. She's convinced herself she works hard enough between taking care of her daughter, trying to maintain control of her asthma, and styling hair in the salon her mother owns that she doesn't need to add a man into the mix.

When Matthew Hennessey walks into her life--or rather, back into her life, she starts to question everything.

Her husband's rival on the wrestling mat in high school, Hennessey never forgot Summer. She always held a special place in his heart. So after serving with her husband overseas, it was only right that he pay his respects to the widow when he came back state-side. He only wants to do right by her.

Unfortunately his desires are eclipsing his logic, and doing right by Summer is harder than he thought.

I glanced at my watch.

Every hairdresser in the world lived by their watch--knowing the time was part of the job description.

"
Miss Evelyn will be here for her shampoo and set in fifteen minutes, and then I have the Norbert twins for their haircuts and colors.
"
I said to myself as I tossed the remainder of my lunch in the trash. The break room was empty at the moment, my fellow stylists out on the salon floor with their clients.

I patted my pocket where my rescue inhaler sat in my black smock. Always gotta make sure I have that. Hadn
'
t needed it in a while, but you never know.

I grabbed my purse and darted from the break room to the waxing room, which had the best light to touch up my face. I powdered and puffed and wiped things off, and even fluffed my dirty blonde hair. For a second it had some extra volume, but that fell in a flash.

The thought cheered me. After all, I worked in a salon. Surely we could find the time to brighten my hair.

The door to the waxing room opened, and Winter stuck her head in.
"
Summer? There
'
s a guy here to see you.
"

She raised an eyebrow.
"
I would have said if I did. He
'
s cute, though.
"
As salon manager, my sister Winter knew every client that walked in the door.
"
Maybe he
'
s here to take you on a date.
"

Yeah, because that won
'
t happen.

I wondered who he was--maybe the husband of a client, wanting to treat his wife? It happened every so often. But it usually happened in December, not in July. Maybe one of my clients was having a birthday?

I walked through the salon floor where stylist Audra was finishing up with the client in her chair. The client, Shelby, otherwise known as my nemesis, gave me the stink eye.

Everyone in town knew of me and Shelby
'
s sordid past. I fell in love with a boy. She stole him from me. I beat her up under the bleachers at the football game. She got me suspended from school
...

Yeah. It was a whole thing.

Why the woman had to come to
my
beauty shop--okay,
my mom
'
s
beauty shop--to get her hair done, I didn
'
t know.

I turned and smiled at Shelby, that
"
business smile
"
that I
'
d mastered over the years, and continued through the salon.

The other stylists and nail techs were working, the buzz that never quite goes away filled the salon--a culmination of voices, blow dryers, sprays, and nail files running had become a backwash noise that in a strange way felt like home.

I
'
d been a hairdresser for over a decade--even when Jake and I moved from base to base, I could always find work, and it was the same sounds, no matter what salon I worked in. All the traveling made the familiar environment more home than anything I had for a long time.

Stepping around the corner, my hand bumped the little patriotic flag table topper that sat on the edge of the reception desk. Mom put it there when I married Jake--it was the only patriotic decoration that remained up year round. Now, though, it had other accompanying red, white and blue pieces that filled the reception area, even though Fourth of July was last weekend.

The receptionist, Mikelanne rubbed her ready to pop, pregnant tummy and gestured to the man who stared at the retail shelves near the door with a grin on her face.

The guy was in fatigues.

He turned around, and had his hat in his hand. Immediately my eyes darted to his shoulder, and recognized the stripes for Sergeant, First Class.

My heart pounded and I patted my pocket where my inhaler resided.

I had to force myself to cross the reception area. This wasn
'
t a repeat. It couldn
'
t be
...

I met the Sergeant
'
s eyes.

I nodded.
"
Sergeant.
"
Somewhere my insides jumped into gear. I held out my hand, and he shook it.

I blinked, then my brain kicked in.
"
Of course, thank you.
"
Why else would a man in fatigues be visiting me?

He squeezed the hat in his hand.
"
May I speak with you, privately?
"

"
Sure.
"
I led him over to the small consultation room we had tucked into a corner. Most of the time, however, the room was a catch-all, where advertising was sorted and extra stock got shoved that didn
'
t fit on the retail shelves.

Today, it was an explosion of rainbow colored flyers for a charity event next week. A contrast to the room
'
s pink and white décor--like a grown up version of a princess
'
s room. Mother
'
s whimsy knew no bounds, sometimes.

I closed the door, and the background noise of the salon disappeared. Sort of, anyway. Now it was a dull roar rather than a loud chaos.

"
Pardon the mess,
"
I said, immediately shuffling the flyers into more manageable stacks.
"
This is about as private as it gets around here.
"

And I couldn
'
t help the little bit of a grin--after all, he looked pretty ridiculous in the chair. The green fatigues clashed with the carnation pink seat.

He must have been uncomfortable, because he shifted in the chair a couple of times.

"
Hennessey,
"
he said.
"
Matthew Hennessey.
"
He ran his hand over his short dark hair--longer than a crew cut, but still pretty short. My eyes darted to the sides, quickly assessing the haircut
'
s correctness, looking for places where it wasn
'
t blended right.

Focus
, I told myself.

"
I served with your husband. Bettes was a good man. I can
'
t say we were close, but we were friends.
"

This was not the first man to come pay respects to me, after all, Jake had been gone three years now. Several showed up that first year after Jake died, but it had been a couple of years since I
'
d met another one of Jake
'
s brothers-at-arms.

Hopefully this one wouldn't bring me to tears. I wracked my brain, trying to remember if Jake had mentioned someone named Hennessey the last time I saw him.

Just general memories of my late husband, and how he made me laugh. I bit my lip to hold back errant emotions, because I didn't want to cry in front of this man.

He got a far off expression for a moment, then shook his head and cleared his throat.
"
Anyway, I promised him, when I got stateside that I would check in on you and make sure you were okay.
"

I blinked, his words jarring me out of whatever wash of memories lingered in my mind.
"
Pardon?
"
This was new
...

"
I promised him I would check in on you. Since we went to school together.
"

I held my hands up.
"
Wait, what? I didn
'
t go to school with you. And I went to the same school as Jake, so surely I would remember you.
"

He smirked.
"
He said you would say that.
"
He stroked the brim of his hat he had clenched in his hand.
"
We did, for a while. I was on the wrestling team with Bettes junior year. We kept fighting for the varsity spot.
"

Pack of Strays (The Fangborn Series Book 2) by Dana Cameron
Polls Apart by Clare Stephen-Johnston
Love Stories in This Town by Amanda Eyre Ward
The Problem With Crazy by Lauren McKellar
The Curse of the Pharaohs by Elizabeth Peters
Hunks Too Hot To Touch by Marie Rochelle
Spirit Of The Mountain Man/ordeal Of The Mountain Man (Pinnacle Westerns) by Johnstone, William W.
The Rooster Bar by John Grisham
Where the Heart Is by Darcy Burke
A Devilishly Dark Deal by Maggie Cox
Our partner