Read Summon Up the Blood Online

Summon Up the Blood 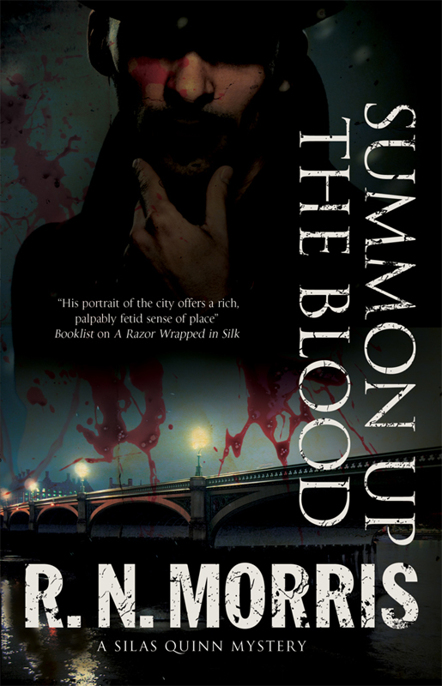 A Selection of Recent Titles by R. N. Morris

A Party in the Criterion

Voices in the Darkness

A Place Beyond Fear

A Visitor to the Department

An Encounter with Miss Dillard

The House of Pomegranates

A Meeting of Minds

At the Palace of the Dead

A Sojourn in Hades

The Wings of Thanatos

Return to the Panther Club

A Selection of Recent Titles by R. N. Morris
The Silas Quinn Series

SUMMON UP THE BLOOD *

A RAZOR WRAPPED IN SILK

Summon up the blood.

I’d like to thank my editor, Kate Lyall Grant, for letting me write the book I wanted, the way I wanted; Sara Porter, for her skilled and sympathetic copy-editing; William Ryan, for his part in making all this happen; Rupert Morgan, for commissioning the original Silas Quinn story,
The Exsanguinist
, out of which this novel grew; and my agent, Christopher Sinclair-Stevenson, for his constant support.

He knew what to look for: the old conflict of desire and fear; a flicker, too, of shame in there. Eyes that simultaneously sought him out and shied away from him.

It was approaching midnight. The glaring streetlights turned night to day, while the illuminated signs on the far side of Piccadilly Circus pulsated with tremulous excitement. To Jimmy, the brilliant studs of light were a million tiny eyes, winking at him over Eros’s head.

The dazzling words set up a rhythm in his head. Soon the letters lost all meaning – not that they had much to begin with. They became a mirage, a vague incitement, strangely in keeping with his mood.

Charged by their promise, he returned his gaze to street level. A boisterous crowd streamed around the statue, dodging between the faltering traffic; mostly taxis at this hour, touting for the after-theatre crowd.

Jimmy’s glance was a question thrown out into the night. And he was quick and skilled in dispatching it.

The eyes that floated towards him were glazed with intoxication; quick to dismiss him, if they saw him at all. He always caught the sneer that accompanied such a dismissal. Jimmy knew full well what he looked like, and what an impression he must make. It was a calculated impression.

He was dressed for business.

A fellow had to know how to present himself to succeed at this game. It was a careful balance. If he went too far in a certain direction, he would attract the wrong kind of attention. He didn’t, for example, hold with those boys who powdered their faces. That was inviting trouble. They had no one to blame but themselves if they were run in by the Old Bill.

But a touch of lavender in a necktie. A delicate lightness of shade to the tailoring. A fresh buttonhole, perhaps, if funds ran to it. A clean-shaven face; most of the gentlemen he aimed to interest preferred their boys fresh-faced. Shirt collar and cuffs impeccably turned out. The grey billycock hat set at just the right angle, somewhere between insolence and invitation. And a revealing tightness in the trousers.

These were the signs he relied on to sell his wares.

But the eyes, it always came back to the eyes. He was looking for eyes that held his for less than a moment. Then dipped to take in what he offered.

On the dip of the gaze, he knew he had them. Without it, he wouldn’t dare make the approach.

You see, your agent provocateur, your plain-clothes copper, in Jimmy’s experience, you generally never got the little appraising dip with one of them. And even though they held your gaze, there was always something vindictive about the way they did it. No fear, neither. Unless – which was always possible – they were a bit that way inclined themselves.

The pavements glistened from the heavy rainfall that had dowsed the capital for most of March. For the moment, Londoners were enjoying a respite, though a dour chill clenched the air, holding the threat of more rain to come. It had been unrelenting, in fact, the rain. Of biblical proportions, and indeed the papers had been full of the floods in other parts of the country.

For a man such as Jimmy, the wet weather was a setback. He needed to be out and about. It was a question of economic necessity. This was where he made his living, on the streets, in the parks and the public places. Admittedly, he could always loiter in an arcade – the Burlington was a favourite. And there were the public lavatories, of course. But when the weather forced men of his type off the streets, they tended to congregate in the same few locations. Too much competition was bad enough. But these little gatherings clustered in doorways only made it easier for the Old Bill.

Jimmy had already spent a month sewing mail sacks under the 1898 amendment. For a second offence he was looking at six months inside, plus a whipping, if luck was against him. He had to be careful.

Besides, there were times when the last thing he wanted was the company of men of his type. He had come just now from the Criterion bar. More accurately, he had fled the place. Too many familiar faces. He had a horror of familiar faces. Admittedly, there was a certain party he had clocked whom he wished to avoid; the small matter of an outstanding debt. These trivial details had a habit of flaring into unpleasantness, especially when the party in question was involved. Better to slip away quietly.

Jimmy had come to the realization young that he was alone in the universe. Strangely it did not sadden him. He was not demoralized by his isolation; he exulted in it. He felt it to be the source of his strength. And if ever it was breached, if ever he let anyone in, he felt it would be the end of him.

Perhaps that was another reason he placed such store by his clothes. Like the cocksure swagger he affected, they were a barrier between himself and the world.

From time to time in the practice of his chosen profession, he was required to remove those clothes. But the disrobing was never complete, he made sure of that. He always contrived to retain some article of apparel, ideally his hat, something of a trademark with Jimmy. At the very least, his socks. Strangely, no one had ever insisted on his removing his socks.

And when it came to it, when it came to that moment of being naked with a stranger – that was the moment he would withdraw his gaze. He would allow men to do all manner of things to him, but he would not allow them to look into his eyes when he was naked.

Yes, the break in the weather was welcome. He felt a sense of release, able at last to be out on the street. He also felt a share in the common surge of appetite and desire that this brief intimation of spring provoked. Perhaps his step was more urgent than that of others in the throng, his appetite closer to hunger. He knew that the rain could come back at any moment, closing down his opportunities with each dark spot it threw down upon his fawn jacket.

His gaze was more desperate too. This was dangerous. He was taking risks. Abandoning caution. This was how mistakes were made. If you weren’t careful, in your eagerness to ensnare your prey, you ended up getting trapped yourself.

All it took was for you to look, for a moment, into the wrong eyes.

Jimmy could tell the man was a toff. There was the top hat and evening suit, and the open overcoat slung loosely from his shoulders. But anyone could put on a suit of clothes, as Jimmy knew. This one had the bearing of one born to make rules rather than obey them. That should have warned him; even so he held the man’s gaze. The
question
had been answered.

The man showed no sign of fear. That, too, should have warned Jimmy. He always looked for fear. These days he preferred to earn his crust by blackmail than buggery. But he was forgetting his own rules. And it was not just down to carelessness or greed, brought on by the man’s evident wealth. Something about those eyes compelled him, as if he knew the danger they contained, but went towards it anyhow.

The man was watching him from afar, the only figure not moving in the tide of humanity, as stationary as the statue he stood beneath. He was waiting for Jimmy.

Another bad sign. Jimmy preferred the punter to make the first move. It was safer that way. And it established his control of the situation. Whatever happened, he could always say they brought it on themselves.

But it was another of his rules that he chose to ignore and he could not say why. The only answer to that question lay in the other man’s eyes. He had to get a closer look at those eyes.

‘Are you lost?’ But it was Jimmy who was lost, even as he asked the question.

There was a certain weakness to the toff’s mouth. Physically, it seemed lacking. But the mouth was not the thing about his face that mattered. What mattered were those eyes. And what mattered about them was not the colour, but their strange, empty coldness.

If Jimmy had felt himself alone in the universe before, he was even more alone now, gazing into those eyes. Anyone else, perhaps, would have been repelled by such a quality. Anyone else would have run from them. But Jimmy was fascinated.

The mouth curled into a grin and looked up. ‘Lost? Here? Beneath Eros? I would have to be a special kind of fool if that were the case.’

‘I know what you meant.’ Indeed, it was as if the man knew all there was to know about Jimmy. He seemed already to have lost interest in him, and this Jimmy found extremely galling.

‘Why were you looking at me?’ demanded Jimmy.

‘Why shouldn’t I look at you? You’re quite a sight.’

A thin tongue licked out to moisten barely existent lips. ‘Don’t flatter yourself.’

Wax Apple by Donald E Westlake
Bon Appétit by Ashley Ladd
[sic]: A Memoir by Cody, Joshua
Three Women in a Mirror by Eric-Emmanuel Schmitt, Alison Anderson
A House for Happy Mothers: A Novel by Amulya Malladi
Nice & Naughty by Cat Johnson
The Loneliest Alpha (The MacKellen Alphas) by Grey, T. A.
Breathless Awakening (The Breathless Series) by Aybara, K
The Perfect House: A Journey with Renaissance Master Andrea Palladio by Rybczynski, Witold
Love & Redemption by Chantel Rhondeau
Our partner