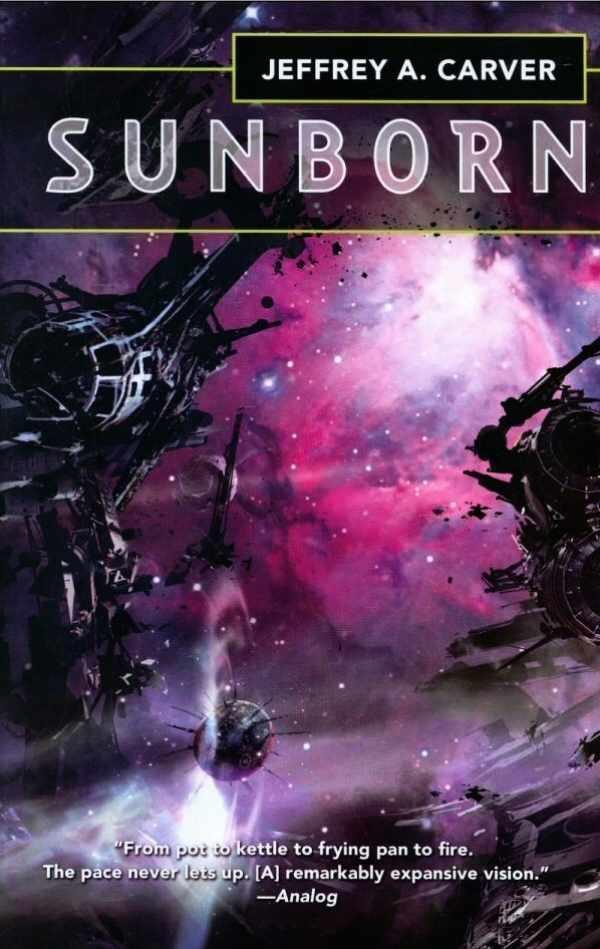 NOTE FROM THE AUTHOR: I've prepared this special e-book edition for a limited, free offer. Read it, enjoy it, share it with family and friends! But please don't post it on other websites. Tor Books has graciously approved this free promotion, but I don't want it to hurt Tor's forthcoming commercial ebook distribution. Commercial and derivative uses are not authorized without express permission. Thanks. Enjoy the read.

[The following details are reproduced from the Tor print edition of the book,

Books by Jeffrey A. Carver

From a Changeling Star

Down the Stream of Stars

*Dragons in the Stars

This one is for Chuck,

who helped make it possible.

It’s also for you readers,

who have waited patiently for too many years.

I thank you all.

This book has been long, long in the making, and there were times I thought I would never finish it. Without the help of the people I’m about to thank, I probably would not have. I know acknowledgment pages can start to sound like a broken record, the same people being thanked over and over, book after book. There’s a good reason for that: the assistance of generous, smart, caring, loyal friends and family who help unceasingly, year after year, book after book. So it has been in my writing life.

Without my family, forget it. You wouldn’t have a book to hold. My wife, Allysen, and my daughters, Julia and Alexandra, continue to be indispensable sources of love, encouragement, and critical feedback. My brother, Chuck, has encouraged in ways large and small, and my sister, Nancy, as well.

Without my writing group, several decades old now, you might have a book to hold, but you wouldn’t enjoy it as much. Craig Gardner, Richard Bowker, Victoria Bolles, Mary Aldridge: four people working in the background who have helped me improve this novel in every conceivable way. You don’t even want to know how many drafts they read and marked up; I lost count, myself. They even helped me confirm that the title the story has carried for the many years since its gestation was the one it should keep.

Jim Frenkel edited this book as he has so many in the past—slowly and with great care. Thanks, Jim, as always. And thanks to Tom Doherty of Tor Books for his patience and faith, and to Patrick Nielsen Hayden and all the other folk at Tor who provide such a fertile ground for books to grow in. And thanks also to my agent, Richard Curtis, who, if he had doubts, kept them to himself.

A special mention goes to the members of Park Avenue Congregational Church of Arlington, Massachusetts, who have taken a special interest in this one—especially Nick Iacuzio and the much-missed Arlene Brown, whose generosity spawned several important characters in the story.

And finally, you, the readers, who have been waiting patiently (or impatiently) for a new Chaos book for far too many years. Many of you have let me know you are waiting, and a more loyal bunch of readers no writer could ask for. This one’s for you.

Somewhere in the fire-scored darkness of space, a being that was neither matter nor energy slipped through spacetime like a whisper, a breath, a rustle of a curtain in the night. The being called itself by a name that, if spoken aloud, would have sounded something like
De-ee-ee-ee-ee-ee-ahh-b-b,
trailing off into extremely low-frequency reverberations. In visible light, it looked like a cloud of coal dust—except when it shrank to a single particle, or stretched to the breadth of a planet.

Deeaab moved with ease through the many dimensions of space. Time was a clay to be molded by its thoughts. It had slipped into this universe out of deep time, across a boundary few could even detect, the membrane dividing one universe from the next. It had fled the fading glow of a universe that was dying.

The crossing was perilous, with no chance of return. Deeaab had seen at least one of its fellows succeed in crossing at the same time, but others had not. Those who had failed were lost forever. The loss was never far from Deeaab’s thoughts; it was like an ever-present pull of gravity.

Wandering through the star-spiral it now took for home, Deeaab listened to slow mutterings in spacetime that seemed to come from very large bodies—and also to the quick chittering of strange little creatures that flickered in and out of Deeaab’s awareness like shadows. Much that Deeaab heard it did not understand, whether from the great or from the tiny. But it was astonished when it finally realized that the
stars
were the great bodies that were speaking—that they were alive with thought and awareness. Could this be? Deeaab had never heard a star speak before.

Marveling, Deeaab approached one sun, at the edge of a cloud. Understanding came with difficulty, but Deeaab could
feel
the star’s thought. The star seemed glad of its presence, and Deeaab lingered, seeking deeper contact. In time it began to understand the star’s feelings; and what it felt was disturbing. Deeaab felt pain, and fear, and a certainty that this sun was dying—but not of natural causes. Deeaab called the sun
*
Bravelight
*
, and wished it could help. But how? There was an inimical force here, unseen, bringing death where there should only be life.

*
Bravelight
*
swelled and reddened. Deeaab drew away, but continued to keep watch...until the shocking moment when its friend flared with sudden, blinding intensity, exploding with a death-convulsion that sent Deeaab tumbling away.

After the death of
*
Bravelight
*
, Deeaab wandered again, numb with grief and fear. It heard other murmurings, and troubling rumors of other stars dying young and in pain. What could Deeaab do? Had it fled the demise of a universe that was simply dying of old age, only to find a worse place, where death was even crueler and more capricious? Was this just the way things
were
in this universe?

Everything Unexpected by Caroline Nolan
Whiskey Kisses by Addison Moore
Esther : Royal Beauty (9781441269294) by Hunt, Angela Elwell
Miami Blues by Charles Willeford
His Golden Heart by Marcia King-Gamble
How to Bake a Perfect Life by Barbara O'Neal
No Way Back (Mia's Way, #1) by Adams, Chloe
Into the Badlands by Brian J. Jarrett
Towers of Midnight by Robert Jordan
Dollar Bahu by Sudha Murty
Our partner