Surrender to a Wicked Spy 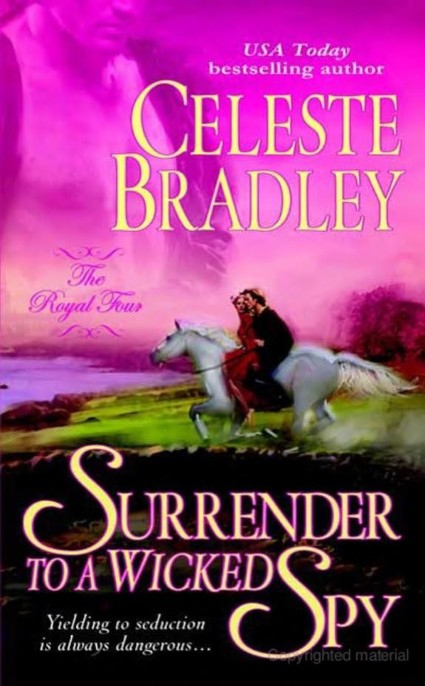 SURRENDER TO A WICKED SPY

All rights reserved. No part of this book may be used or reproduced in any manner whatsoever without written permission except in the case of brief quotations embodied in critical articles or reviews. For information address St. Martin's Press, 175 Fifth Avenue, New York, NY 10010.

the truth
—
whether he wants to hear it or not
.

Created in the time of the Normans, when King William the Conqueror found himself overrun with "advisors" more concerned with their own agendas than with the good of the whole, the Quatre Royale were selected from the King's own boyhood friends. Lords all, and bound by loyalty rather than selfish motives, these four men took on the names of ruthless predators while acting as the Quatre, keeping their lives and identities separate from their true roles…

…to act as the shield of deceit and the sword of truth in the name of the King.

Courageous as the Lion

Deadly as the Cobra

Vigilant as the Falcon

Clever as the Fox

The appointment is for life—the commitment absolute. Bonds of family, friends and even love become as insubstantial as a dream when each hand-selected apprentice takes the seat of the master. All else is merely pretense, kept for the sake of secrecy and anonymity. For it is true that the iron bars of duty cage the hearts and soul of…

Lady Olivia Cheltenham fell into the Thames and was rescued by a Viking god. Rather, she was pushed in—by none other than her very own mother—and the Viking god saved her. In any case, he tried to. Sorry to say, she ended up saving him.

When Olivia felt her mother shove her over the railing of the Westminster Bridge, she had what seemed like a very long time on the way down to think upon the reason. Despite the fact that Olivia did not have her diary in hand—being in midair, after all—she was sure Mother had never shown signs of being homicidal before. Doubtful indeed that it was a sudden onset of madness.

Nor had Olivia done anything more offensive than ask repeatedly why she was being required to stand on a bridge and look at the Thames for hours on a chill, windy day. Therefore, the only explanation could be that there had been an eligible bachelor within sight.

As the icy water closed over Olivia's head, wrenching her bonnet from her head and taking her breath away, Olivia was forced to admit that perhaps she should be more charitable. Mother had been under such a strain lately.

Yet surely she wasn't mad enough to kill Olivia in the hunt for a husband?

The river was not deep here and Olivia felt her toes touch the soft, mucky bottom briefly before her natural buoyancy began to pull her upward again. Her head broke the surface and she took a much-needed breath. This not being the first time she had ever fallen into water in her life, she had begun to strip off her spencer immediately and now she was able to pull her arms free and toss the short jacket aside to float slowly away.

Fortunately, her gown would not weigh her down, for she was wearing a very light muslin without much in the way of petticoats. Mother had insisted she wear it this morning despite the weather—a fact made suddenly sinister in the light of recent events. Olivia put her mother's plotting out of her mind in favor of a more important matter—survival. She was an excellent swimmer, but the water was icy with autumn runoff. It was imperative that she get out immediately. She kicked her slippers away and examined her situation.

Above her, she heard her mother's horrified screams and the shouts of what seemed like a large crowd gathering, but Olivia did not waste time peering up at them. The water was so cold that it was already sending spikes of pain into her hands and feet. She ought to get out before she went numb. Turning easily with a sweep of her arms, she spotted a set of the slimy stone stairs that led from the bank down to the water every so often along the river's edge.

She was about to strike out for the spot when something large hit the water next to her, sending choking brown filth up her nose and into her open mouth. She sputtered in disgust and swiped at her face, clearing her vision in time to see a pair of great arms reaching for her.

With a kick, she avoided them easily and swam a short distance away. The arms belonged to a large, filthy stranger.

Of course, in his defense, he probably hadn't been filthy before he entered the water.

In fact, he'd probably looked very nice indeed a few moments ago. Olivia tread water easily as she considered him. If the chiseled cheekbones and firm chin visible beneath his streaming, dirty gold hair were any indication, he normally looked very fine indeed. His head remained very stably above water. Apparently he was large enough that he was able to stand firmly on the bottom. He looked like a very wet, very dirty Viking.

No, not descriptive enough. He looked like a large, wet, dirty Viking
god
.

There was only one man in London who matched that description—Dane Calwell, Viscount Greenleigh, official Catch of the Season. Olivia had never met him formally, but she had seen him at many of the events her mother had dragged her to in the search for a husband. Olivia hadn't bothered to dream of "the Dane's" attention—well, at least not that she would admit to, and midnight fancies of Viking… er, conquest notwithstanding,
she
was most definitely not the Catch of the Season.

As Mother never failed to remind her, she was a bit too tall for fashion and had never quite mastered the trick of wearing ball gowns with grace and her hair never seemed to stay in place and she never seemed to know quite what to do with her hands—or her unbecomingly large feet—in public and the gentlemen all seemed to be prettier than her, or at least seemed to pay more attention to their appearance.

Yet Mother had not given up. Cheltenham depended on Olivia. Hence the reason handsome, wealthy Lord Greenleigh had decided to go for a swim.

He swiped long, previously golden hair from his face and blinked sky blue eyes at her in confusion. "Are—are you all right?"

Mother's game was working. He was dutifully going to rescue Olivia. How embarrassing. She grimly decided not to play. "Oh yes," she assured him. "No need to bother about me."

Obviously not understanding, he reached for her. Olivia evaded his grasp, swimming effortlessly aside. Unfortunately, this put him between her and the stairs and she was already starting to shiver.

He reached again. She evaded again. He stared at her in frustration. "Will you come here so I can help you?"

"No thank you," she replied primly. "If you'll simply move aside, I shall make my own way out."

He blinked, frowning. The river lapped at his chest much the way it did to the great immovable pillars of the bridge. "What?"

Olivia gave up. She had no time to make idle chatter with him. He was big enough to simply walk out, but she was growing colder by the moment. Striking out, she took a side tack that swept her a bit downstream of him. Of course, the great fellow reached for her again, but he seemed unwilling to take a single step, so she rounded him quickly and made for the stairs.

Halfway there, she glanced back. He still stood there, as immovable as a stone. "Aren't you coming?" she called. "The water is very cold."

He turned his head and upper body to look at her. "I—I can't."

Olivia was beginning to lose patience. Her teeth were chattering mightily now and she couldn't feel most of her body. "I'll make sure she apologizes," she snapped. "I know it was a terrible thing to do, but I do think you're being a bit mulish now."

He blinked at her. "I have no idea what you're talking about, miss, but the reason I can't move is that my boots have sunk into the mud."

"Oh." Olivia looked longingly at the stone stairs once more, then turned back.

"No," he protested when he saw her returning. "Go on! You must get out of this chill water!"

Olivia ignored him, stroking swiftly to his side. "Can you not pull your feet from them?"

He glanced away sheepishly. "They're very new and they fit quite tightly. It usually requires my valet's help to pull them off."

Olivia didn't bother to hide her opinion of that sort of vanity. He glanced at her expression and shrugged. "Everyone is wearing them that way these days."

Some Viking god he was. It was just her luck that the only man in London who attracted her was a vain and impractical dandy. As if he needed any help looking stunning!

Locking her jaw against the chattering that now verged on violent, Olivia reached for him. "You need to take the weight off the mud," she told him. "Let yourself lean back and try to float your weight on the water."

He frowned at her. "I think I'd prefer to stay firmly on my feet."

"I'm sure you would," she said patiently, though it cost her dearly. Still, she could hardly rail at the fellow when it was Mother who had caused the entire mess. "Trust that I know what I'm talking about," she urged him. "Livestock gets stuck in the mud at home in Durham all the time."

"Livestock?" He looked a bit miffed at that but began to lean back obediently. She caught his wide shoulders with her numb hands, kicking fiercely as his weight began to come on her. For a moment she thought he was going to sink like a stone, but then he began to float on the sluggish current.

"Now wiggle your feet from side to side," she instructed him. "You must break the suction of the mud."

He scowled at nothing in particular.

"Are you wiggling?" she persisted.

"I'm wiggling," he assured her gruffly.

Olivia was beginning to have trouble moving her limbs. She felt so heavy…