Read Swimming Without a Net Online

Swimming Without a Net 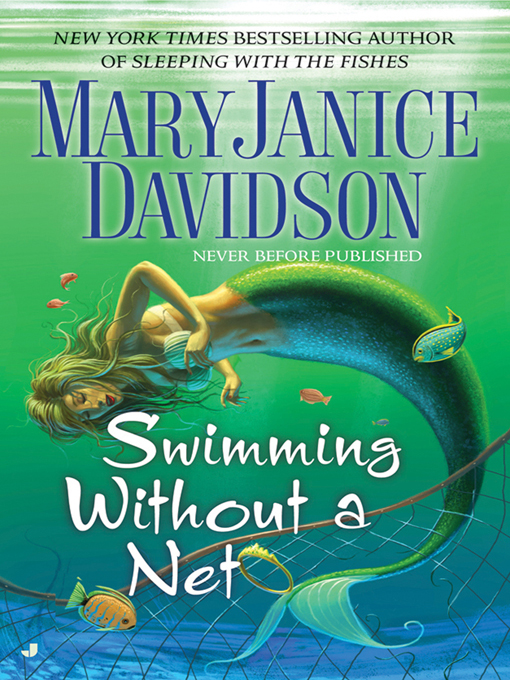 Praise for
Sleeping with the Fishes

“A zany, amusing fantasy as MaryJanice Davidson provides her trademark wacky, fun tale of the tail…Readers will enjoy this delightful, whimsical story.”

“Davidson certainly knows how to capture the reader’s attention…a hilarious romp with a mermaid, a merman, and a human with a Ph.D. that will have you rolling on the floor in laughter…funny with a side of danger all rolled into one neat little package.”

“Known for her quirky sense of humor, MaryJanice Davidson launches what promises to be a smashing series with
Sleeping with the Fishes
. This book brought back the magic of first reading something new by this talented author. Her sense of humor and imagination know no bounds…pure delight to read from start to finish.”

“Davidson breathes new life into the frequently tired paranormal romance genre with this refreshingly witty entry featuring a decidedly bad-tempered half-mermaid named Fred…It will be interesting to see where Davidson goes with this new series.”

“Ms. Davidson is royalty in the ranks of paranormal comedy writers. Somehow, she manages to keep up a rapid-fire round of jokes without ever being too silly or skimping on characterization. It will be a fun trip to see how Fred’s life develops in coming novels.”

“An amusing and sexy new series with a decidedly underwater twist. Employing her patented brand of offbeat humor and lighthearted fun, she serves up a new heroine whose life is about to get extremely complicated.”

“You will spend many an hour just laughing through her books.”
*

Praise for
the Undead novels of MaryJanice Davidson

“A lighthearted vampire pastiche that recalls the work of Charlaine Harris.”

“One of the funniest, most satisfying series to come along lately. If you’re [a] fan of Sookie Stackhouse and Anita Blake, don’t miss Betsy Taylor. She rocks.”

“I don’t care what mood you are in, if you open this book you are practically guaranteed to laugh…top-notch humor and a fascinating perspective of the vampire world.”

SLEEPING WITH THE FISHES

SWIMMING WITHOUT A NET

DEAD AND LOVING IT

JENNIFER SCALES AND THE ANCIENT FURNACE

JENNIFER SCALES AND THE MESSENGER OF LIGHT

Swimming Without a Net
MaryJanice Davidson

This is a work of fiction. Names, characters, places, and incidents either are the product of the author’s imagination or are used fictitiously, and any resemblance to actual persons, living or dead, business establishments, events, or locales is entirely coincidental. The publisher does not have any control over and does not assume any responsibility for author or third party websites or their content.

SWIMMING WITHOUT A NET

A Jove Book / published by arrangement with
THE AUTHOR

All rights reserved.
No part of this book may be reproduced, scanned, or distributed in any printed or electronic form without permission. Please do not participate in or encourage piracy of copyrighted materials in violation of the author’s rights. Purchase only authorized editions.
For information, address: The Berkley Publishing Group, a division of Penguin Group (USA) Inc., 375 Hudson Street, New York, New York 10014.

This book is for everyone who was ever irritated by a Disney heroine. Detox with Fred, and rejoice!

It’s also for my dear friend Cathie Carr, who had a crummy year, was lied to (repeatedly) by loved ones, deceived by friends (who had good intentions, but still), did everything she could to save her marriage only to be rewarded with a boot in the face (repeatedly), and managed to pick up the pieces anyway. I’m thirty-eight now, and I never thought I’d meet someone with a bigger pair of plums than mine. Cathie’s plums make mine look like raisins. Or is that an overshare?

I could never write a book without adding an acknowledgments page (or two, or six). Some readers find this puzzling (and often annoying, but hey, nobody’s sticking a gun to your head, right?), but for me it’s always been simple.

All writers know they didn’t create the book/story/play/ commercial jingle/tampon ad on their own. Just having a partner to keep the kids out of your hair is worth a mention on the acknowledgments page. And I’ve been lucky enough to have far more than that.

My friends are quite jaded by now; when I told my buddy Todd he was getting a mention on the acknowledgments page, he said, “Can’t you send me cash instead?” Yeah, well, drop dead twice, O’Halloran.

So! Thanks, in no particular order, are due to: my husband and coauthor (we write the Jennifer Scales series together), my children, my sister, my parents. My agent, my editor, the copy editors, the line editors. The marketing reps, the catalog designers, the cover designers, the flap copy writers.

See, I just put a bunch of gibberish out and it happens to land on a page. The people mentioned above are the ones who take a messy, 300-plus page rough draft and turn it into a book. Maybe even a great book.

For this book in particular, I ended the first draft on Chapter Thirty Three. Even for me, notorious for my tight (read: short) single titles, 200 pages is BAD. Even 300 is skating on the edge. As I explained to my editor, “I got nothin’.” I got to the end, it was done, the story was told, and I was on page 200.

So Cindy, bless her heart, read the manuscript and sent me a page of suggestions. Pointed out where I broke Awful Writing Rule #1: I told, not showed. Suggested scenes I skipped altogether (it’s because of Cindy that we saw Moon Bimm again, and speculation about Fred’s mysterious merman father started up so quickly). Because of Cindy, we saw Dr. Barb in the Caymans and the disaster (and Jonas pummeling) that nearly followed.

(Also, for those of you who haven’t read the preceding book,
Sleeping with the Fishes
, fear not: I think I did a pretty good job explaining the events in that book. You shouldn’t be too lost. But hey, if you are, just buy the first book!)

(We’re still waiting, here. You think we’ve got nothing better to—)

I must warn you, dear readers, that there is an act of somewhat annoying violence in this book, an act I pretty much glossed over. Cindy coaxed a truer scene out of me, one more suited to the situation and the story and the characters.

The end result, I think, was not only a longer book (my true goal) but, thanks to Cindy Hwang, a better book.

The latter, of course, is up to you, dear reader. And so, finally, thanks for picking up the book and giving it a try. If the cover caught your eye, hooray! If it was the flap copy, even better. If it was name recognition, that’s swell. But as every reader knows, there are all kinds of reasons to pluck a book off the shelf…or not.

So thanks for the pluck. I’ll try not to let you down.