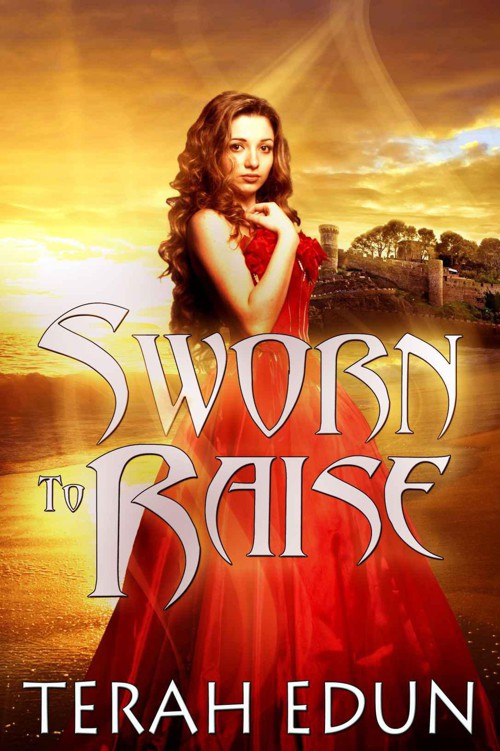 Other Books By Terah Edun

All rights reserved. Except as permitted under the U.S. Copyright Act of 1976, no part of this publication may be reproduced, distributed or transmitted in any form or by any means, or stored in a database or retrieval system, without the prior written permission of the publisher.

Other Books By Terah Edun

SWORN TO RAISE (Book One)

Want to get an email when my next book is released?

This book is dedicated to my wonderful editors.

C
iardis Vane watched the townspeople jeering as the local Gardis strapped the highwayman into the stocks. Frowning Ciardis wormed her way closer to the front of the crowd, straining to get a peek at the criminal. She felt no pity for the condemned man; he would die tonight, regardless of her feelings. The nightwolves were already pacing, their shadowed forms just visible in the dense tree line, waiting for darkness to fall.

Without the protection of the house wards, the highwayman would be defenseless locked in the stocks.
I wish I could say it will be a quick death,
she thought with clinical detachment,
but they’ll probably go for his guts first
. The man deserved no less than death in any case; he had done nothing but steal from—and sometimes kill—those who traveled the Imperial coach roads. “Stand and deliver,” indeed!

Ciardis pushed back her heavy brown curls with a sun-bronzed hand. Turning slightly to the side she whispered about his crime with the other washer maids who’d come to see the spectacle. Suddenly, she felt a sharp pinch on her wrist. Turning to see who had interrupted her entertainment, she looked over and frowned down at the younger woman who now stood by her side.

Wringing her hands anxiously, Margaret looked up at Ciardis and gave a quick jerk of her head to the side to indicate they should speak outside the crowd. “You’ll want to hear this firsthand, Ciardis,” Margaret said with urgency.

“All right, all right,” Ciardis muttered as they made their way out of the crowd and down to the washer station with a few other girls trailing behind. The slight blonde woman who scurried next to her was a great source of village gossip, and Ciardis knew that whatever she had to say would be worth leaving the spectacle in the midst of the judge’s punishment. To Ciardis, a good piece of gossip was as welcome as spun gold...usually.

When they’d walked far enough from the crowds Margaret was quick to tell Ciardis the news which she’d heard from weaver’s daughter who’d heard it in the apothecary the day before.

Practically bursting with the pent up the news Mags bounced on the balls of her feet as she said, “Fervis and the caravan girl…they’re
together
Ciardis.”

“They’re together?” Ciardis said with disgust, “No, he’s with me.”

Mags shook her whole head, curls bouncing every which way, in denial.

“They were
seen
, getting in a big fight and then…” said Mags.

“So?” interrupted Ciardis in disdain, “That means nothing.”

Patiently the girl continued ignoring the interruption, “And then the girl’s father came and threatened to kill Fervis. One thing led to another and now they’re bound.”

This bit of news hit Ciardis with all the weight of a lead brick.

At this point Ciardis was staring off in the distance – hand pressed flat against her stomach as if by holding it she could keep her stomach from plummeting in despair.

Minutes later the town bell rangs signaling that the highwayman had been sentenced and imprisoned. Everyone would be going back to work now.

Ciardis trailed behind Mags, trying to comprehend how her life had just upended.

When she got back to the wash room Ciardis bent over the soapy tub, mind numb as her hands worked mechanically as to scrub the red jerkin. Margaret knelt across from her, happily chattering away like a magpie. According to Mags, Fervis Miller had gotten the passing girl with child after a tumble in the hay. The news had spread like wildfire after the fool had stumbled into the local apothecary’s asking for honey’s brew. Every woman in town knew that there was only one use for honey’s brew, and it wasn’t to sweeten tongues.

If the girl had been a gypsy, like Ciardis, her swelling belly wouldn’t have mattered much. She would have borne the brunt of the town’s gossip for the winter months and gone home with a second mouth to feed after the snows melted. But the girl’s father was the caravan driver for the only merchant willing to brave the fierce winds of Vaneis in the winter. He’d heard someone’s tongue wagging and had confronted the girl before the honey’s brew had passed her lips.

Frantic once he’d heard the truth from his daughter’s lips, he had gone in search of Fervis Miller. Whatever words had passed between the caravan driver and Fervis over his daughter’s ‘condition’ had been enough to get the message across. Fervis, bruises already darkening on his skin, had shakily gotten down on one knee before five witnesses and asked the girl for her hand in marriage.

The wedding was to take place on the dawn of the Sabbath – just three days hence.

Ciardis frowned – contemplating going to their wedding, she would
have
to, weddings were one of the few forms of entertainment in town, if she didn’t go everyone in the village would say she was hiding away – ashamed that the man she’d planned to marry was bound to another. She didn’t care. Honestly, she didn’t. If that idiot couldn’t keep his stick in his pants, then he didn’t deserve to wear her ring. Wringing out the last jerkin, she twisted it like she was wringing a stubborn turkey’s neck. Or, better yet, Fervis Miller’s.

She wiped her hands with a drying cloth, careful to prod Mags for more tidbits at the right intervals. She had finished washing the jerkins and Mags was done with the skirts she was scrubbing. They put them out to dry before the oven fires and then moved on to fold the huge stacks of tunics and pack them in the caravan trunks with dried sprigs of fresh mint. Ciardis thought about the stolen moments she’d had with the miller’s son. In the summer, they’d picnicked in the meadows, and throughout mid-winter he’d held her waist as they flew across the ice of the secluded mountain ponds. Memories of the soft touches exchanged and the ardor in his voice when he’d promised that he’d petition for her vows were still imprinted upon her mind. He’d promised over and over that he’d convince his mother somehow
that Ciardis, Gypsy-daughter, with her skin the color of pale pecans and unruly chestnut curls, should be her daughter-in-law.

Ha!
Last spring, she and Fervis had even hatched a plan for her to bump into his mother as she left morning prayers at the church. They’d painstakingly played out the scene while laying out on fresh hay in the cobbler’s barn. When the day to bump into his mother had come Ciardis had tried to strike up a conversation. But from the moment the conversation began, it was clear from the rancor in the woman’s tone and the disparaging look in her eyes that she considered her son’s marriage prospects, far above the town’s orphaned gypsy girl.

Guess she was right
, Ciardis thought with irony,
He’s going to get a caravaner’s daughter who lifts her skirts for the first young man she sees instead.

Frustrated and tired, Ciardis threw her basket of clothes down on the floor with such force that she startled Margaret right out of her monologue. “What’s with you?” Mags asked, dark eyes wide.

“Nothing, nothing,” muttered Ciardis. “There was a ground bug on the floor—just wanted to get it before it escaped.”

Inside she was seething, calling Fervis every dirty name she knew. She’d wasted two whole years on that git. Two years of listening to his constant whining about grain prices and the drecking bakery gossip in his uncle’s shop.

She’d set her sights on him at age fifteen. He had been boring then, and he was boring now, but she could live with boring. What she
couldn’t
live with were the pangs of hunger after an evening with no meals, a month without meat, or the backbreaking work of being a temporary field hand. With a man like Fervis, set with a steady income from being a Miller, Ciardis could have a life of leisure…or close to it. But now thanks to that lout she was ruined. Here she was, seventeen with no nest egg or dowry to buy a husband, and she’d already snubbed every boy within twenty miles to show Fervis her devotion. Her devotion, for crying out loud! Fat lot of good it did her now.

After finishing the last load of laundry, she eased out of the hot sauna room and into the outer chamber, where Sarag, the dour head cleaner and accountant, kept the tally chips. The tally chips were small color-coded marks given out when each washer maid completed a task. A red chip for hard to clean garments like the red leather jerkins, a blue chip for folding a basket of clothes, a green chip for pressing and ironing and so on. She counted hers as she walked down the hallway to Sarag’s office. Today she’d washed three loads by hand and pressed and packed a further two. That was just enough to get her a decent tally at the end of two weeks’ work. She had to pay the innkeeper soon.

Handing the chips over to Sarag, she waited impatiently in front of the scarred wooden desk. The woman took forever with anything, particularly when that anything involved money. She squeezed the last shilling out of every washing cloth and piece of soap she bought.

At last, Sarag handed over her payment and went home. She even had a few extra coins, enough for a small bowl of soup with bread—
huzzah!
Since she could pay in cash she didn’t have to worry about adding tonight’s dinner to her tab, then. The innkeeper was a pleasant man, but he always charged interest to the month’s tab when she did that.

She was freezing by the time she stepped into the warm inn kitchen, even though she was bundled in three layers, with woolen pants on under her skirts. Rushing to the fire, she warmed her chafed hands over the flames.